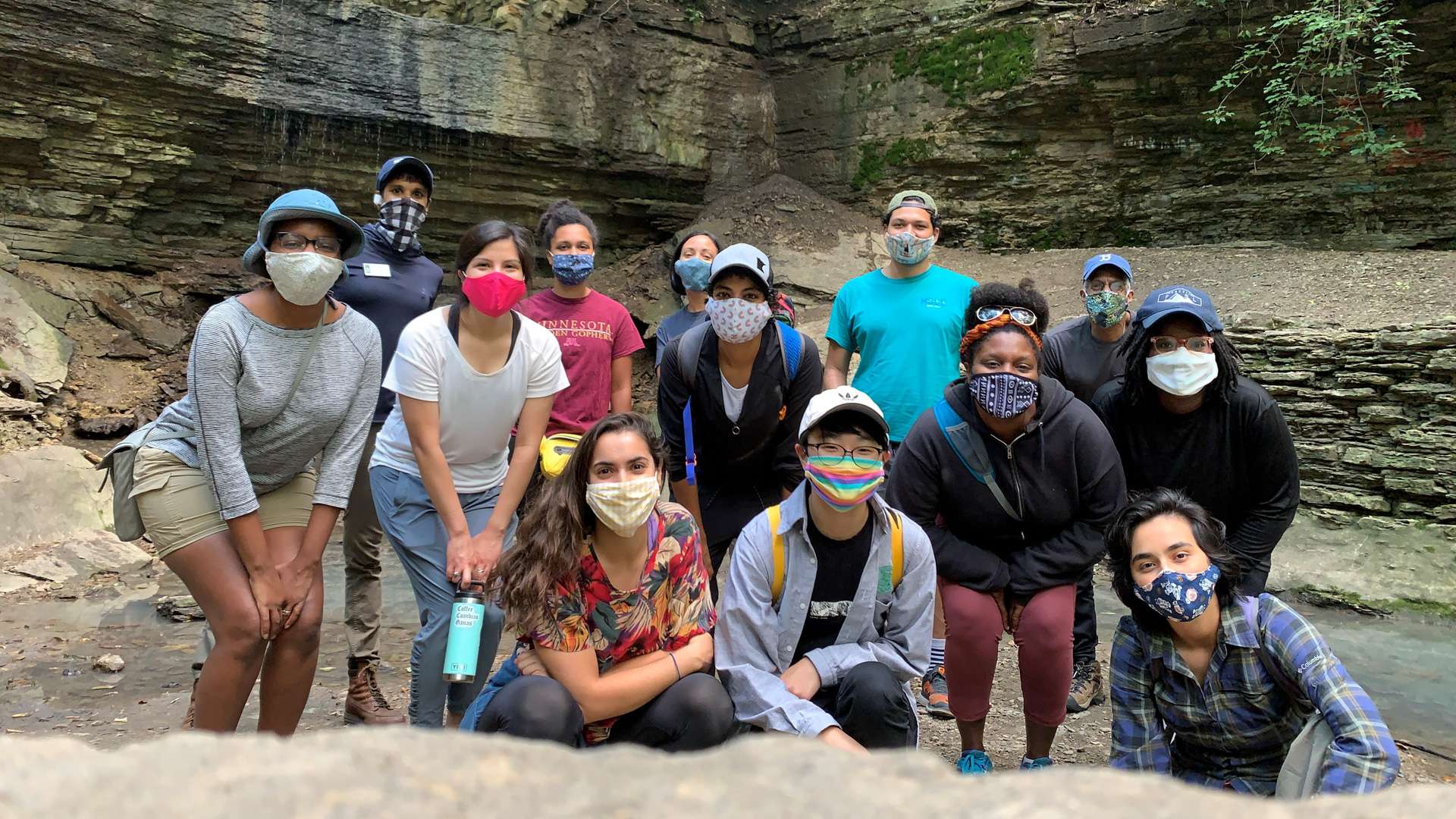 Asha Shoffner grew up fishing with her grandfather and playing outdoors, but it wasn’t until she was in her 20s that she truly started to spend time in nature.

Even though the St. Paul native loves camping and exploring the outdoors, she sometimes felt on hikes and trips with her white partner that others didn’t want her there.

“The looks I would get out in the woods were like ‘you’re not welcome here,’” said Shoffner, who was adopted from India.

Shoffner, 37, has since dedicated her personal and professional time to creating welcoming spaces for people of color outdoors. Today she works as an environmental and outdoor education program coordinator for St. Paul Parks and Recreation, where she has helped develop a series of outdoor recreational and learning events for people of color, led by people of color.

Shoffner was a member of the Minnesota Outdoor Recreation Task Force, a 21-person group formed in 2020 to plan for growth and increasing equitable access to nature recreation statewide. The Task Force published its report in late April, with a recommendation to create a new, independent Outdoor Recreation Office. That office would be tasked with increasing access and participation for Minnesotans of color and  helping people passionate about seemingly opposite hobbies like bird watching and bird hunting unite in defense of natural conservation.

People of color make up about 20 percent of Minnesota’s population, but only about 5 percent of state park visitors, according to task force co-chair Randolph Briley with the Minnesota Department of Natural Resources.

In 2020, Shoffner started a Facebook group called BIPOC Outdoors Twin Cities. It was a way for people to find outings, tips, and potentially new friends. Today the group has more than 900 members.

Many members joined the group for safety reasons, Shoffner said. People wanted to do conventional outdoor activities like hiking, paddling, and fishing, but they wanted to do so around people like themselves and not feel like the only person of color in the woods.

At work, Shoffner and St. Paul Parks and Recreation launched the Black, Indigenous, and People of Color (BIPOC) Park Ambassadors program. The program was funded in part by a grant from the Capitol Region Watershed District. It allowed St. Paul to offer programming for people of color, led by people of color. The program hosted 19 events in 2020 with activities such as camping, canoeing, fishing, ice fishing, an edible plants hike, and even an invertebrate study.

The program has tried to reach immigrant groups and non-English speakers, too. A Spanish speaking guide led a Latino hiking group on walks all over St. Paul. This year, Shoffner said the parks department is looking to hire someone from the Karen community to teach an outdoor cooking class.

The BIPOC Park Ambassadors group has been a programming highlight in the past year, according to Andy Rodriguez, recreation manager for St. Paul Parks and Recreation. It attracted new users as well; 90 percent of participants had never registered for park programming. 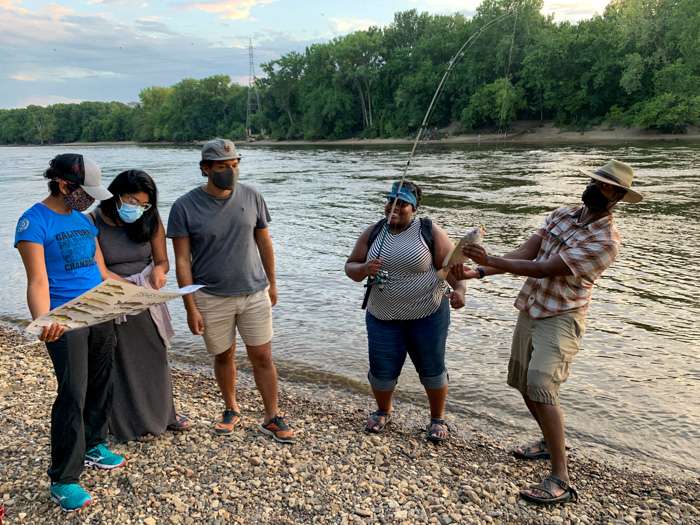 Rodriguez said more funding from the state could help such programs have a larger impact.

Understanding needs from different cultures is key to making them feel welcome at state parks, Briley said. Minnesota state parks started to install larger picnic tables in recent years after conversations with members of the Hmong community, Briley said. Hmong families often camp in large groups, and were looking for larger tables to accommodate their needs. It’s a simple change that can make a park more inviting.

“We constantly need to engage with our local communities to see what would make a state park inviting for them,” Briley said.

The Outdoor Recreation Task Force was composed of people from different public, private-sector, and nonprofit organizations involved in the outdoors. Representatives came from tribal nations, tourism boards, and even Winnebago Industries.

The task force was created to help the Minnesota Department of Natural Resources and Explore Minnesota, the state’s tourism office, decide if an independent office of outdoor recreation is needed.

There are 16 states with such offices nationwide. Every state’s office is different, Briley said. Some are part of the tourism board, others are divisions of the department of natural resources or the commerce department. How Minnesota’s office would or could be created has yet to be determined, Briley said.

The new office doesn’t yet exist, but the task force has recommended goals for it. The first? Increase outdoor participation by improving access and equitability for people of color.

Shoffner is happy she participated in the task force, and said she appreciated that white members routinely brought up equity issues. Increasing access for people of color goes beyond putting up a welcome sign, she said, but should include asking communities directly what they want to see in their parks.

She has learned that people believe being in nature with others who look like them is a real benefit. Today in education, leaders have recognized the importance of having teachers who come from diverse backgrounds. The outdoors should be no different, she said.

Outdoor recreation is a big business in Minnesota, generating more than $9 billion per year, about 2.4 percent of the state’s gross domestic product. Underrepresentation of people of color in outdoor recreation means lost dollars for the state and private businesses. A lot of those businesses are starting to realize they aren’t tapping into the market as well as they could be, Briley said.

“It’s a moral issue but it’s also an economic imperative for the industry,” Briley said.

Outdoor enthusiasts have differing and, at times, contrasting interests. Some want to snowshoe softly across a trail others want to rip through it on a snowmobile. To unite those communities, Briley said, it’s important to focus on the common interest: conserving nature and making it accessible to all. 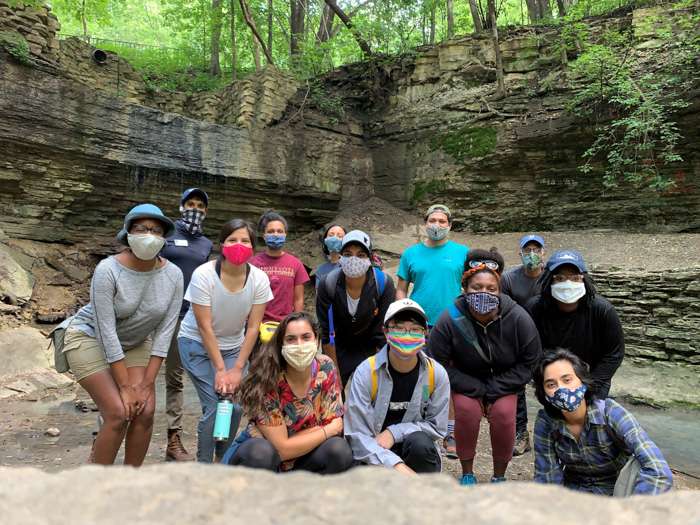 This article first appeared May 7, 2021 in Sahan Journal, a nonprofit newsroom dedicated to reporting on Minnesota’s immigrants and communities of color: www.sahanjournal.com. It’s republished here with permission.

13 Minnesota Bike Events in the Next 12 Months

Here’s a look at Minnesota bike events from now until September of 2021. Ride an old favorite or find a new one!

The soft opening happened in 2020, but now there’s ten more miles on the ground at Redhead.

Save the Date for These 2022 Bike Rides!

Put these rides on your calendar early and ride some of the best Minnesota and Iowa have to offer.

Crews have been busy and the smell of freshly turned dirt is in the air at Barsness Park.