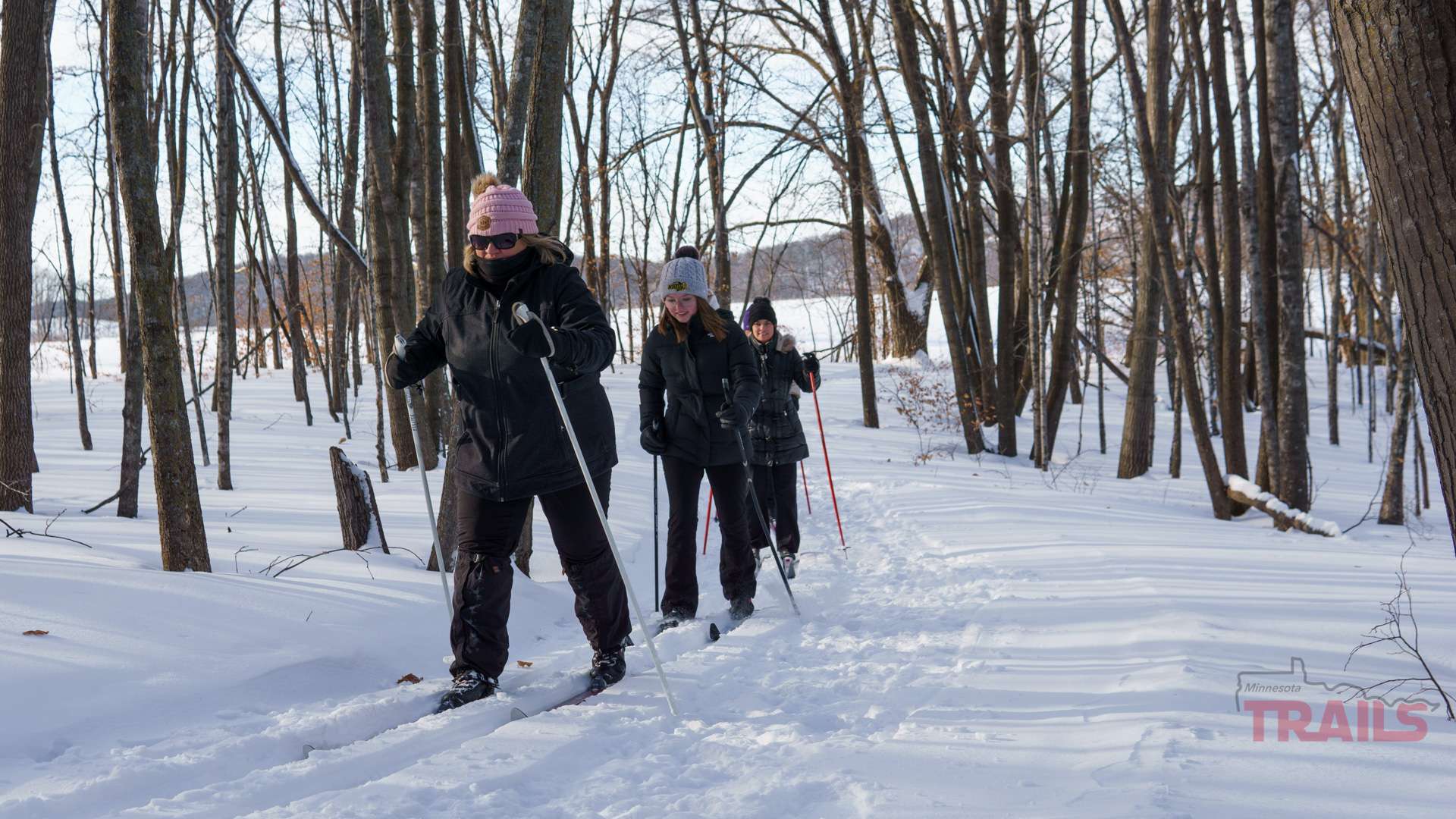 10,000-acre Maplewood State Park is blessed with a peaceful, natural beauty that encompasses more than 20 lakes interspersed among hilly woodlands and an extensive hiking trail system. During the winter eight kilometers of groomed cross-country ski trails are a delight to explore and adventurous skiers can even break their own trail on an additional eight kilometers of un-groomed, backcountry trails.

With snow conditions just right, Jen and I decided to spend an extended weekend in one of Maplewood’s camper cabins to see what it was like to rough it in style and go skiing and snowshoeing right out the front door.

The park has five camper cabins, but only three of them are available year-round. The muskie, crappie and pike cabins sit on the northwestern edge of Beers Lake, the largest body of water within the boundaries of the park. We arrived Friday night just before sunset and began moving in. There was just enough time for dinner by the bonfire before the effects of the previous week had us turning in early. 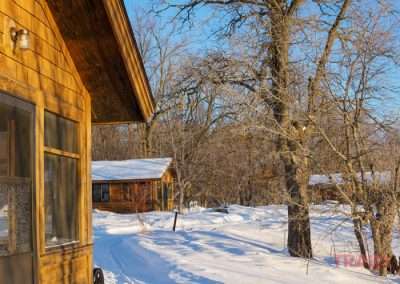 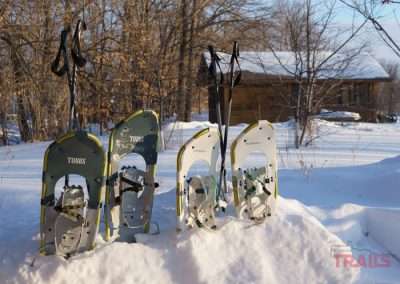 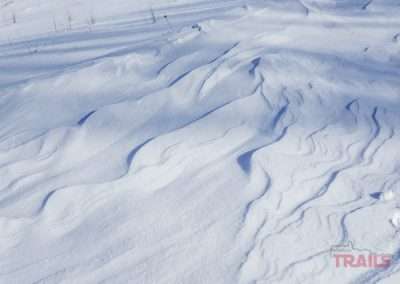 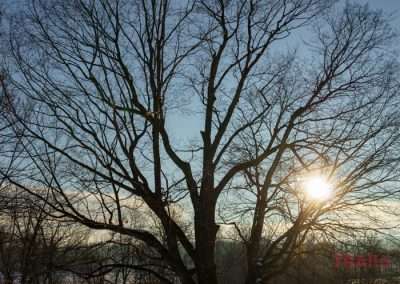 On a below-zero morning we sat at our simple wooden table and watched the sun rise over Beers Lake. The snow-covered landscape was drenched in pale shades of reds and oranges at first, then the light turned to gold, reflecting in the windows of the neighboring cabin. There was no sound, no critters moving around and what little breeze there was, gently dusted the frost off the trees which swirled through the air in ribbons that shimmered in the early morning sun. This scene was so beautiful it took us two pots of coffee to fully comprehend.

By the time we had our skis strapped on, temperatures had improved to the positive territory, but the wind was getting stronger and stronger ahead of a warm front said to arrive later in the day. We found the ski trail right behind our cabin and got to work, going north and counter-clockwise around the large loop in the northern half of the park. The trail was in Ok condition, but in some of the open sections of the prairie it was all but covered by new snow from the day before. 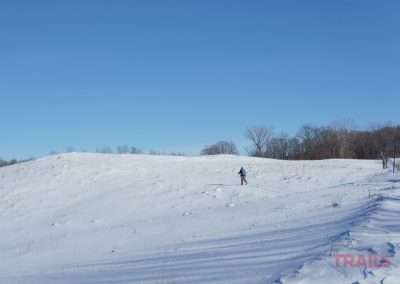 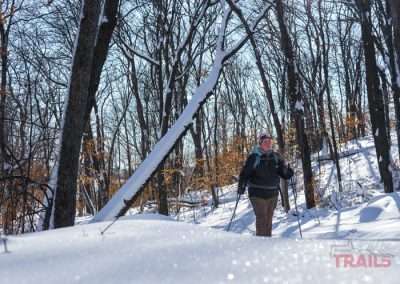 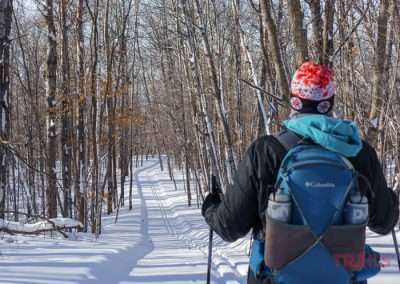 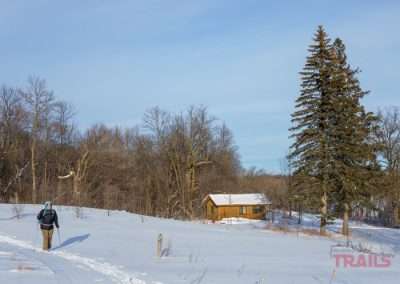 According to the park’s website, the area of today’s Maplewood State Park has evidence of human habitation as far back as 6,000 years ago. More recent residents who began arriving in the late 1800s turned the wooded hills and patches of prairie into farmland and their relics are slowly being swallowed up by the earth. If you look closely, you can spot a crumpled piece of tin or the skeleton of an old plow along the trail, especially when the leaves are off the trees. After passing remnants of a grain silo on the northern edge of Beers Lake, there was a steep hill to climb.

During the warmer months one might linger and enjoy the view of the surrounding woods and prairie patches, but the wind was just too brutal on top of the naked hill and we hurried on into the woods for protection. The trail continued through the woods, the horse camp and some more open prairie until we arrived at the warming house on the northern edge of Cataract Lake. The wind wasn’t as much of an issue as we had feared and with the sun doing its January mid-day best, it was downright pleasant-as long as we kept moving. Many others felt the same way and the warming house parking lot was buzzing with skiers and snowshoers. 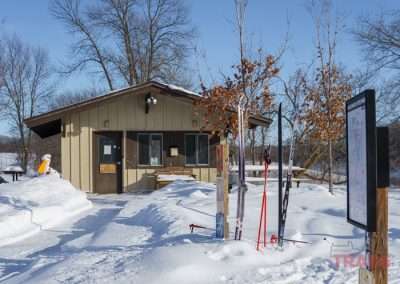 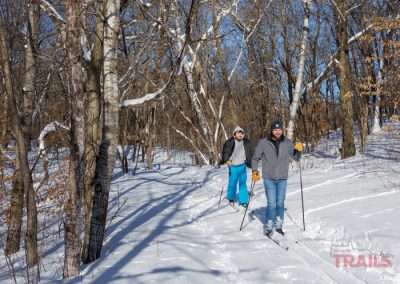 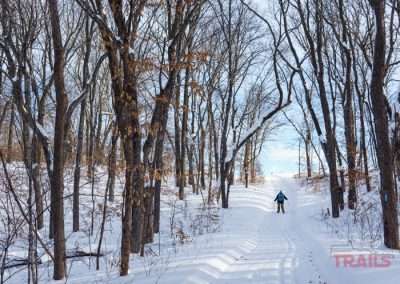 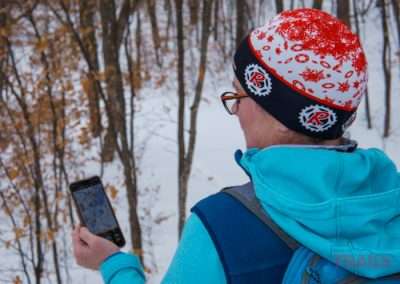 We continued around the north side of Cataract Lake where the howling winds had completely destroyed the tracks. When we ducked back into the trees they reappeared and took us through the forest along the western edge of the lake, then on through the Knoll Loop of the campground. We were just about back to the cabin when we reached a monster of a hill.

We had no choice but to assume the position and herringbone-wobble up what felt like a ski jump. About halfway, I paused to catch my breath and open up a couple of zippers on my various layers. A look backwards over my shoulder had me wondering just how far I would fly if I was crazy enough to go down this hill.

After that effort we completely forgot about any temperature issues we might have had in our hands or feet. Everything was steaming along just fine. Just like that we were back at the cabin where fuzzy sweatpants, cozy hoodies and warm wool socks were waiting for us. The wind started whipping hard from the south and we skipped the bonfire. After skiing almost nine kilometers, lights out came early. It didn’t take long for us to fall asleep listening to the wind rattle the window screens and hiss through the branches of the trees in the dark. 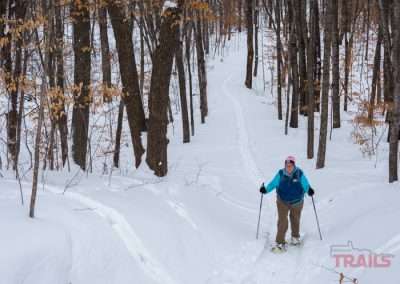 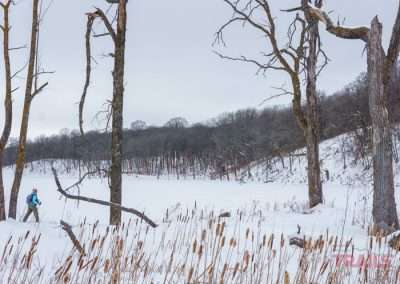 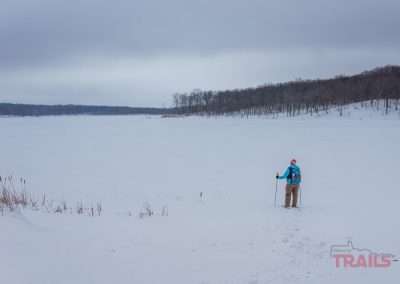 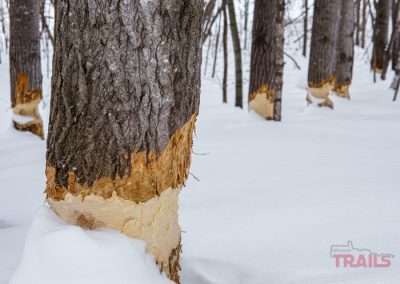 Sunday was reserved for snowshoeing. The plan was to go south from the cabin this time, make a loop around Cow Lake and come back. According to our math, this was going to be an ambitious trip of nearly seven miles. We realized shortly after taking off, that the snow on the “un-groomed backcountry trail” was anywhere from two to three feet deep and had not been traveled in a while.

It was difficult, even with my 36” snowshoes, and meant taking a dozen steps, then catching my breath. Luckily, there was a lot to see. The trail followed the western edge of Beers Lake and there were plenty of scenic views of the frozen landscape. We moved deeper into the woods and trudged up and down the rolling hills beneath the maples, pausing frequently.

When we reached the hike-in campsite at Cow Lake, it was time to make a decision: Break more trail on the 3.7-mile loop around the lake or turn around. A quick look at the Avenza map told us we were moving at about a mile an hour and as much as the rugged trail begged to be discovered, we were looking at a nearly five-hour trip back to the cabin. In times like these Jen and I consult our mission statement “We’re doing this for fun and exercise” to see what we should do.

Since we already had the exercise part of the trip covered-with more to come-we felt that a death march around Cow Lake wasn’t in line with our values. The way back was a little easier because we had already flattened out the piles of snow along the way. Another couple coming our way was enjoying the fruits of our labor. After passing by them we were repaid immediately because they left behind an even smoother path for our trip home. 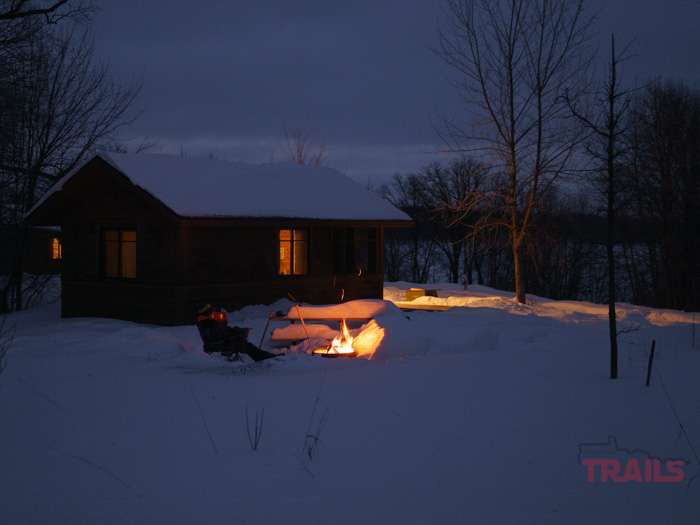 Back at the cabin we got ready for a bonfire. The wind was still whipping, but felt warmer than it did the day before. Lucky for us, the cabin sheltered us and things were quite cozy despite it being winter and January in Minnesota. Finally, the gales died down and the stars came out. The moon was nearly full and shreds of clouds raced across its pale face. We heard the wind in the trees, but didn’t feel it and the fire kept us warm until it was burned down to embers.

No Campfire? No Problem!

Eight Numbers To Get You out of the Woods

It’s dark, it’s cold, and you didn’t expect to be out here this long.