The Year of the Fat: First Quarter 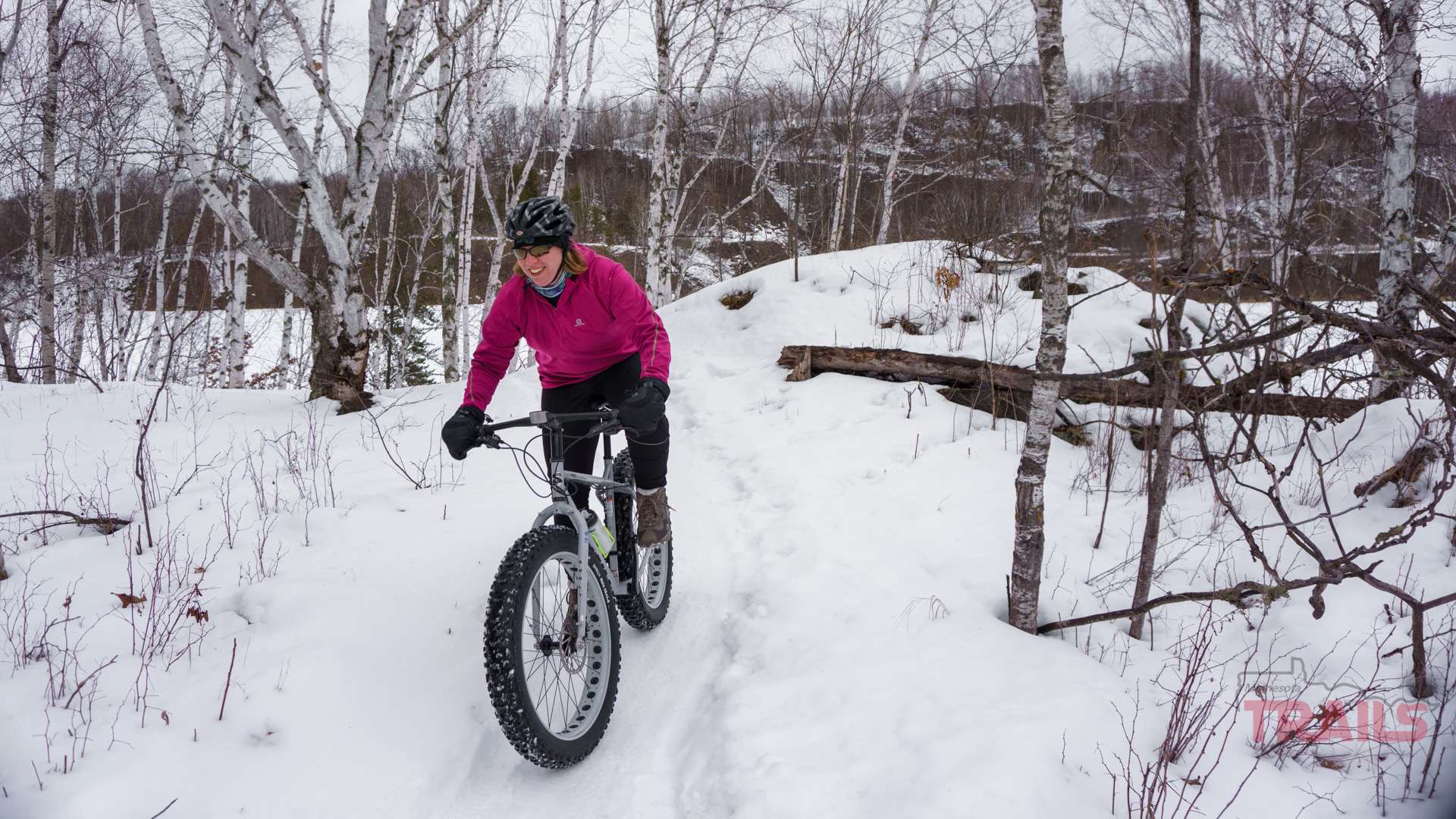 March its over and I’m already a quarter of the way into a project I didn’t know I started:

The Year of the Fat in which I’ll ride only my fat bike.

My road bike has never been comfortable for me. No matter what components I swapped to get a different position, I just couldn’t get it to a point where I loved it. I also don’t want to buy a new one until I know exactly what I want and get my dream bike. That’s why I decided to find out just how far I can take the fat bike.

There’s nothing delicate or dainty about the Pugsley. It’s taller, wider and heavier than any bike I’ve ever had, even my dad’s pre-WW II steel monster I welded a steering wheel to when I was 12. But it’s easy to pedal, despite the huge tires, and it takes any hill.

After I put smooth Sunlite Crusher road tires on Max, he rolls over almost anything without much fuss at 35 psi. I just shift gears and go. And Kona Handplant handlebars make it a more comfortable ride for long distances. They actually give a very good hand position for out-of-the-saddle climbing. 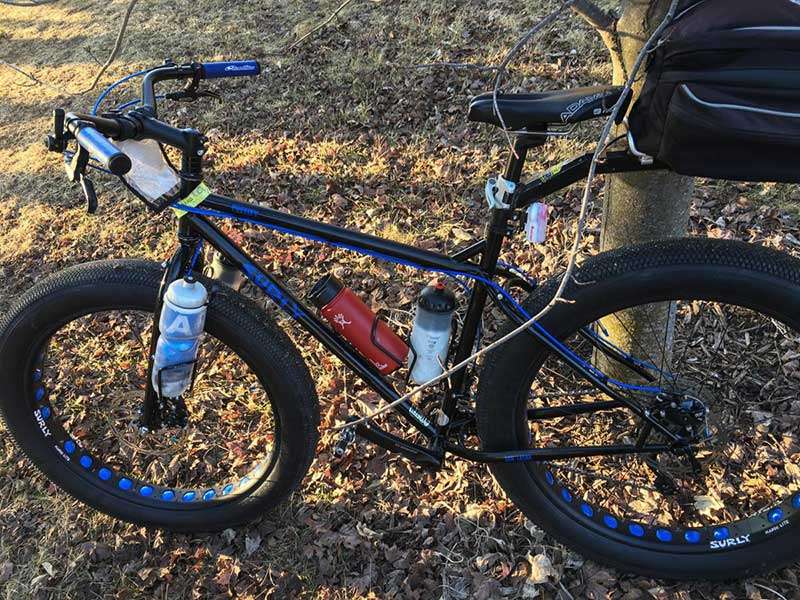 The new and improved Pugsley

Route planning has become a lot easier, because gravel roads are no longer off limits. No more poring over county maps or surfing Google Earth to see where the pavement ends. Max takes me back to a time when I just hopped on my bike and rode for fun. I have no intentions of ever putting a GPS on his handlebars or use a speedometer of any kind. Over the last couple of road rides I figured out that I’m moving at about 11 miles an hour and that’s good enough for me.

We had a frosty start to the year. Besides countless night rides and Handlebar Happy Hours with the Central Minnesota Bicycle Club, a few events stood out: 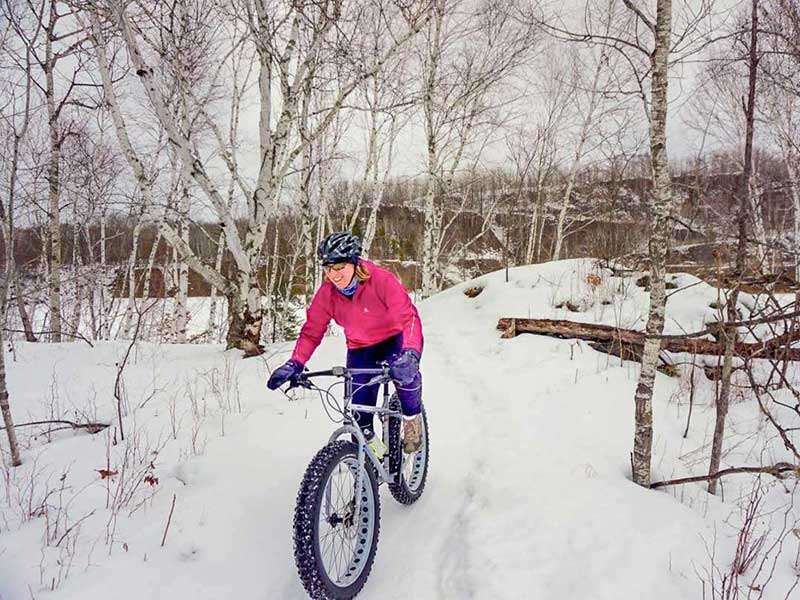 Kari tearing it up at Cuyuna

January brought an epic trip to the yurts at Cuyuna. Max and Guido, my wife’s fat bike, rolled in the snow in record-breaking low temperatures. It was her first single-track night ride.

I went back to Cuyuna a few weeks later with my friend Kari. She had just bought a Pugsley, Roger, and had never been winter single track riding. We spent a whole day rolling around the mine lakes. Trails were in perfect condition from hundreds of fat bikes hitting the trails at the Cuyuna Whiteout the day before. It was wonderful to see her enjoy her new ride and she had a great time. 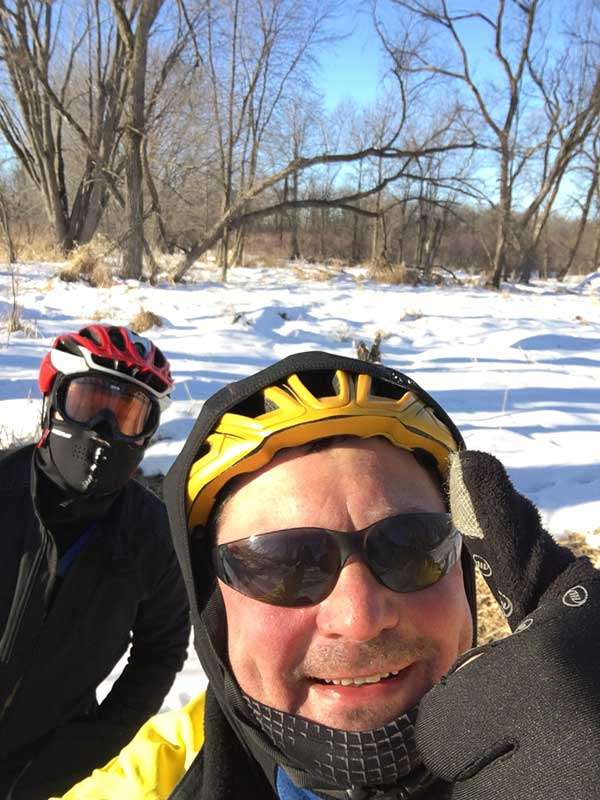 Another awesome trip was a ride on frozen Two Rivers River in Lake Wobegon Country. My friend Joel and I rode on the river between Bowlus and Holdingford on a day of highs in the single digits. The same ride is usually 7 miles on the Lake Wobegon Trail, but on the river it is exactly twice as long, because it snakes and doubles over itself so much you swear you just rode this part and someone is pranking you. Conditions were perfect for a river trip: Sunshine, lots of ice and very little snow. Downed trees, barbed wire and homemade bridges were our biggest obstacles. Really, we biked about as much as we worked around those things. Toward the end of the ride, I put my right leg through the ice and my right boot filled up with water. It was getting dark and the temperatures were dropping rapidly. We stepped up the pace and made it to Holdingford at nightfall. It was probably bad manners, but when we were warming up at the Holdingford Legion, I sat at the bar, took my boot off and massaged life back into my foot. The sock was frozen into the boot.

Disclaimer: River ice is never safe. We managed to snap one picture before our cell phones froze. 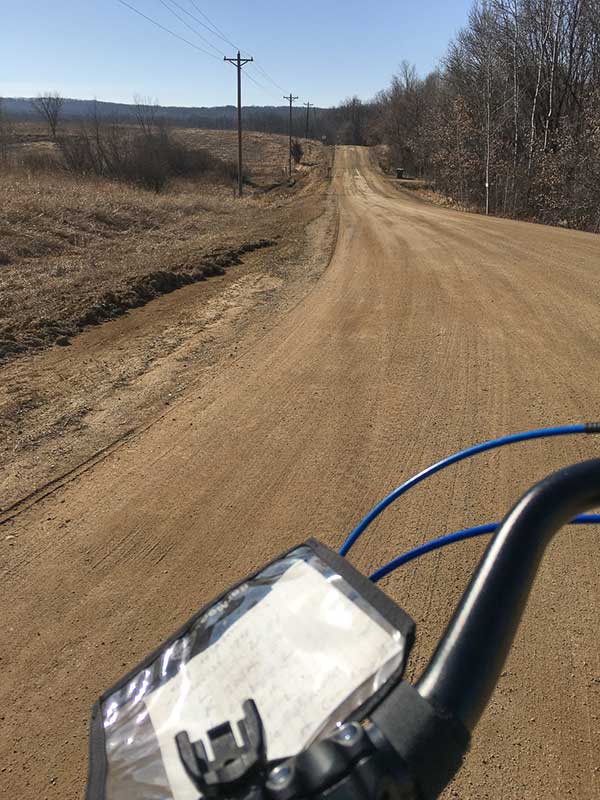 Gravel in the Avon Hills

In March I took a 50-mile road and trail ride to the annual Saint Patrick’s Day parade in Marty, Minnesota. It was the first truly warm day and there was still snow in the ditches. And just like every year on my first long, sunny ride, I got sunburned. If you’ve never been to the Marty parade, you’re missing out. The trip there had some nice gravel, too.

I’m looking forward to the next quarter of the year of the fat: I’m officially signed up for the Ironman Bike Ride in April. In May I’ll cover the Lake Bronson Adventure Race and the Minnesota Bike Opener in Park Rapids. In June it’s time for the Caramel Roll Ride, Dam2Dam Ride and the Parks and Trails Excursion.

The first quarter was single track, gravel and snow. Now that Max has new tires, it’ll be roads, roads and more roads.

Eight Numbers To Get You out of the Woods

It’s dark, it’s cold, and you didn’t expect to be out here this long.

From leisure rides with the kids to the ride of your life, don’t miss these epic events!

Take the road less traveled and get a glimpse of what Minnesota’s woods were like before the settlers arrived.

If you’re looking for a fun day trip close to the metro area, grab your skis and give the trails in Becker a try.