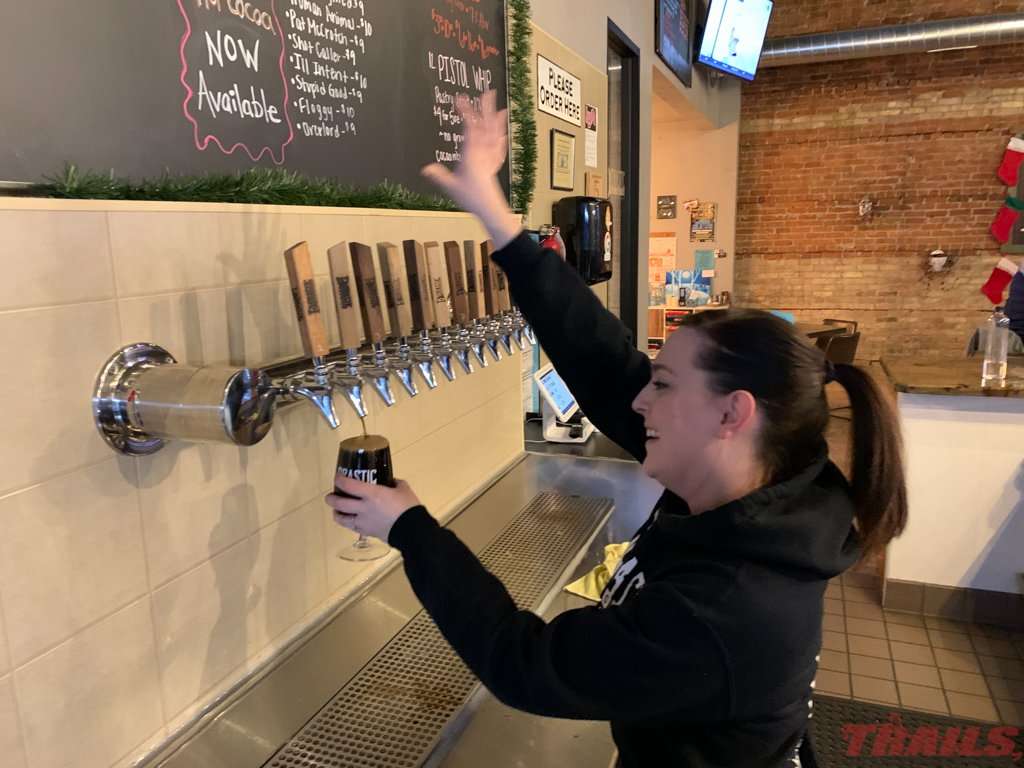 Just west of Wadena in central Minnesota, you’ll find a small city park with a lot of outdoor recreation packed into it. Black’s Grove Park is only a one-half mile square parcel of land, tucked between farms and the Wadena Municipal Airport, but its roughly 160 acres are home to miles of trails. In the summer, mountain bikers and walkers claim the terrain and roam eight miles of easy to intermediate trails. Winter use includes groomed fat bike paths, groomed cross-country ski and snowshoe tracks, as well as a dog-walking area. Oak Creek, which flows through this mix of hardwood and coniferous woods, is a constant companion and its steep banks make for a scenic backdrop in any season. There’s a large shelter building made from huge logs, with a fireplace inside, and rustic bathrooms. 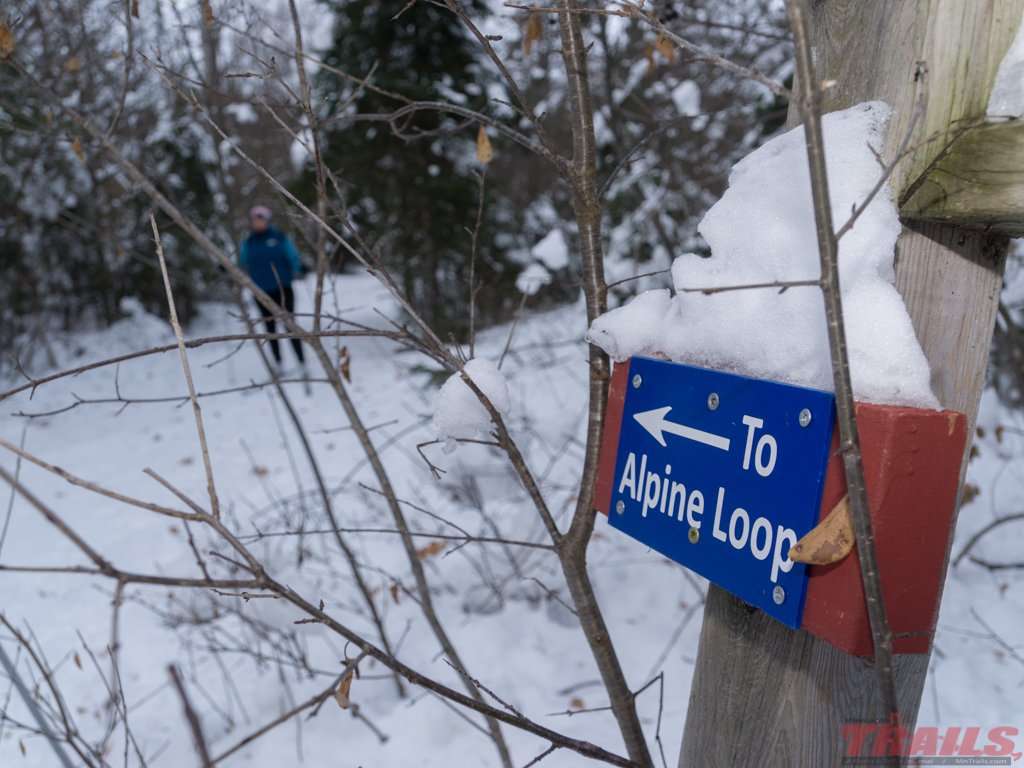 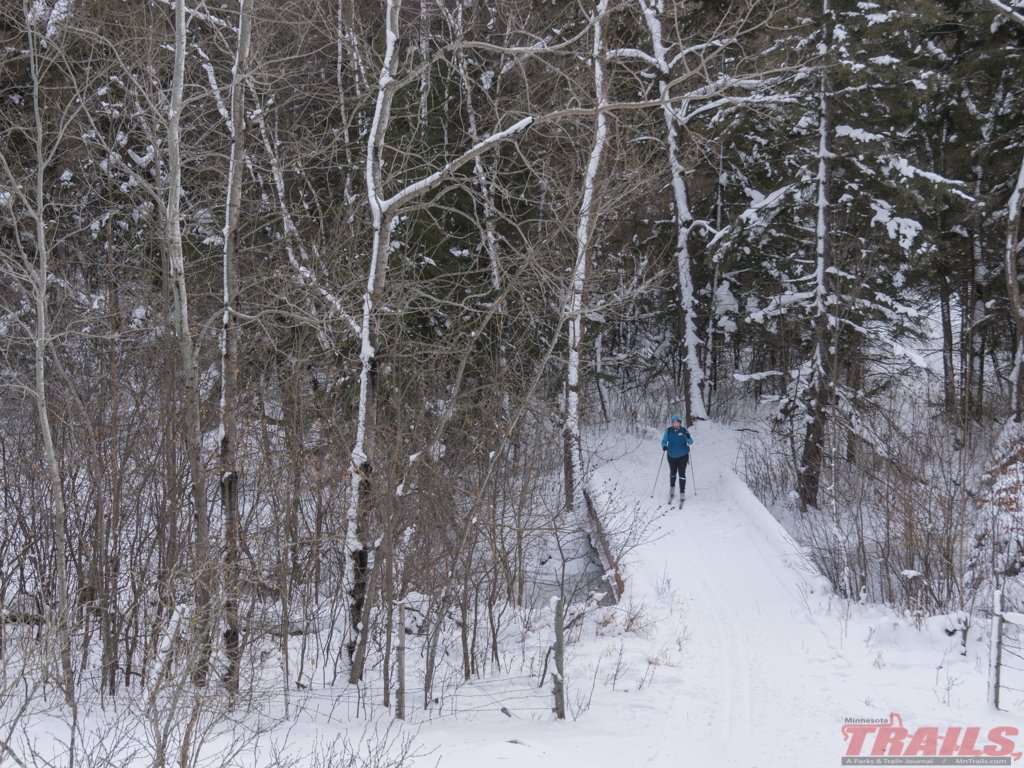 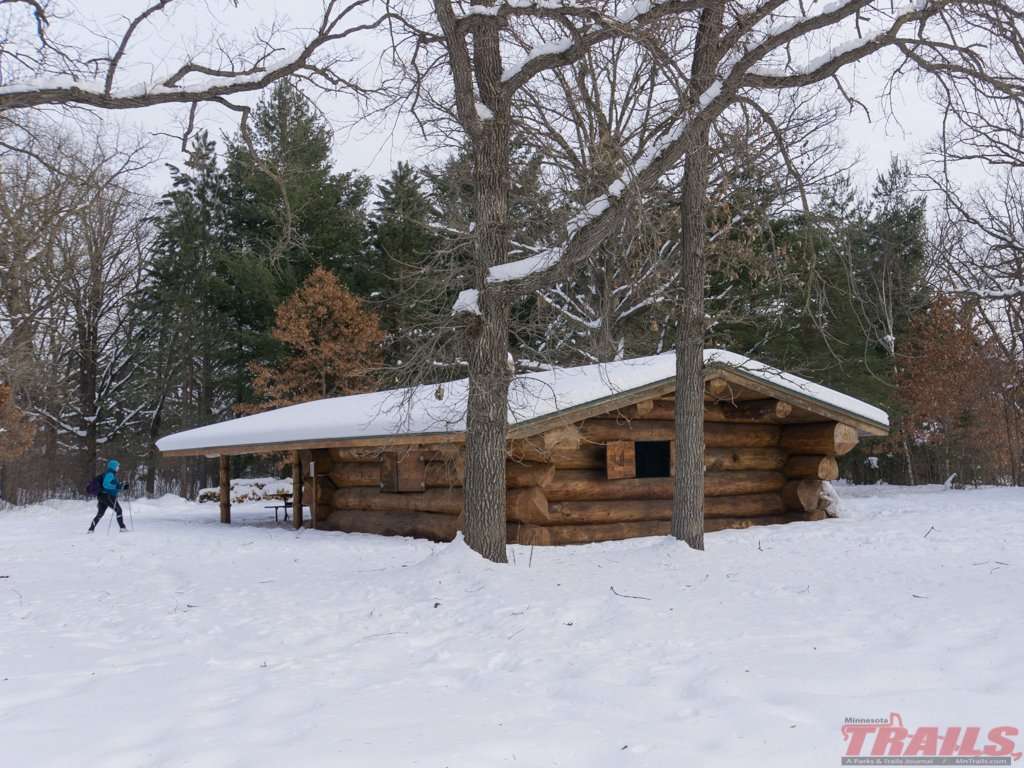 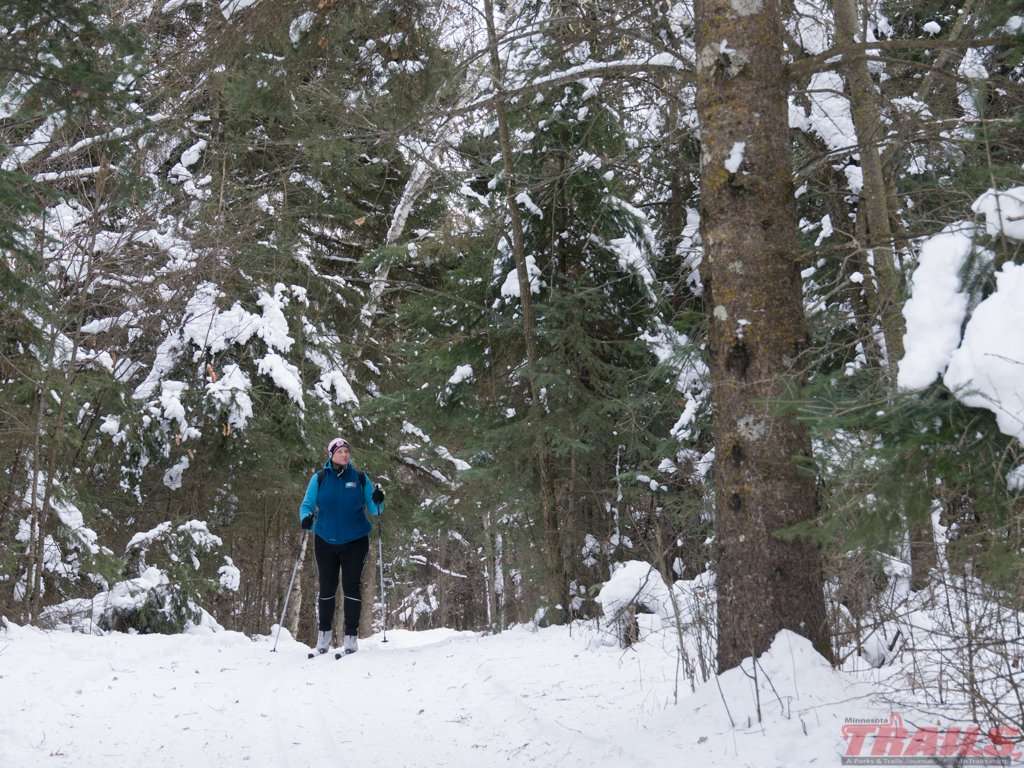 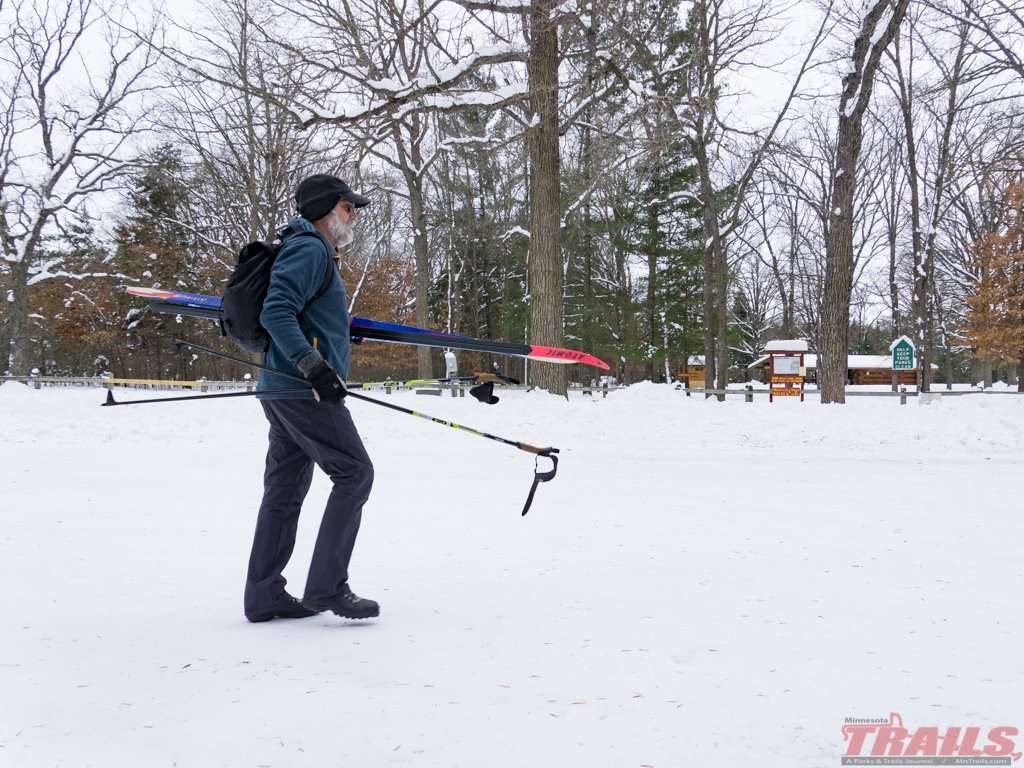 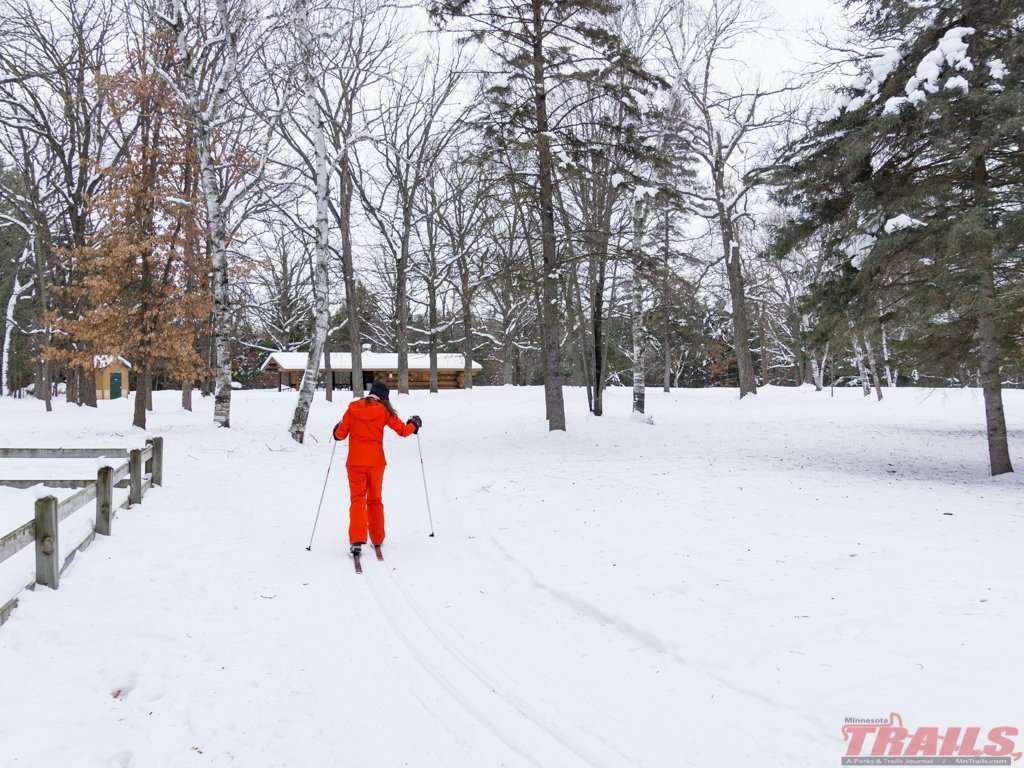 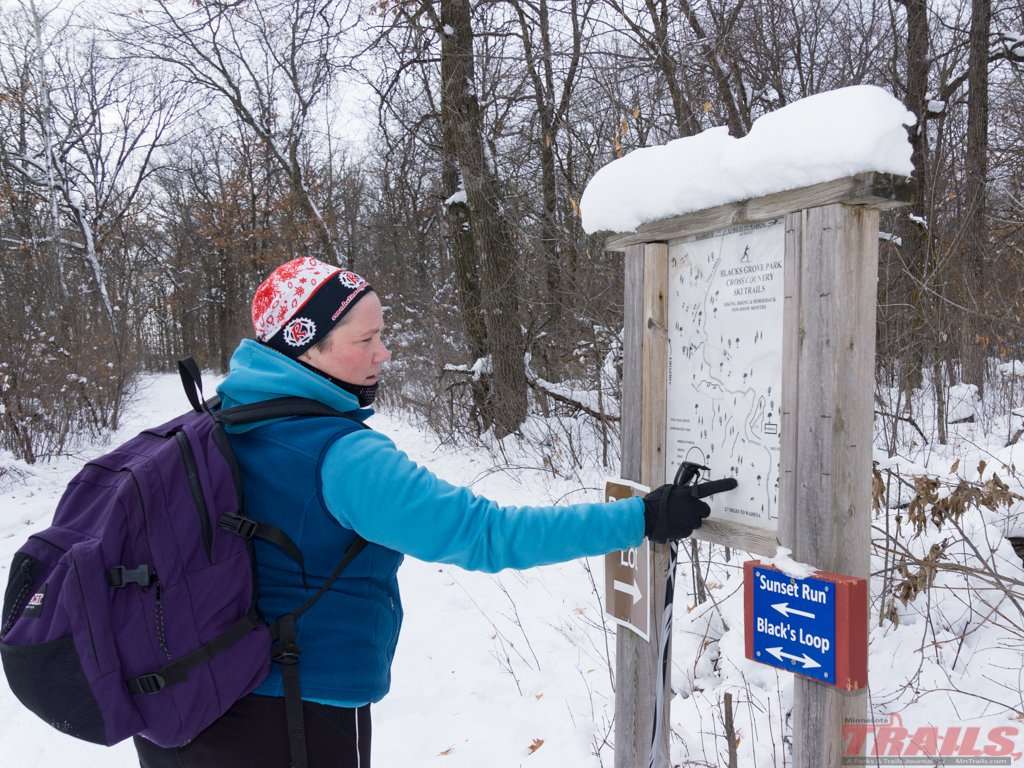 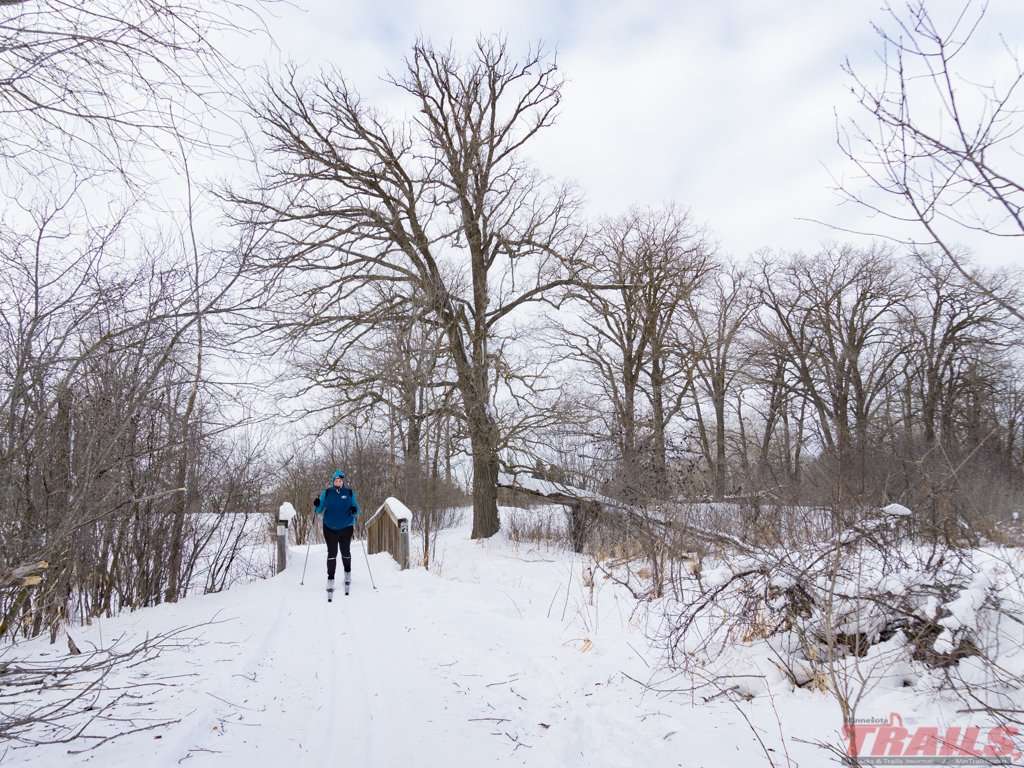 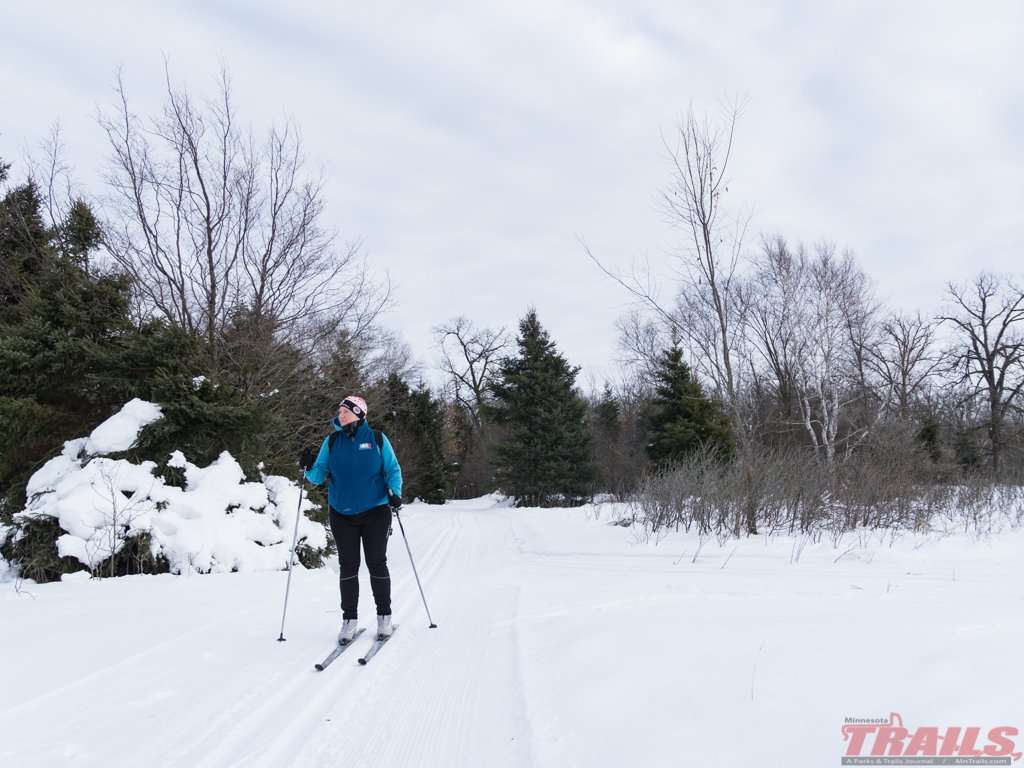 Jen and I arrived just after noon on an overcast 17-degree Sunday, strapped on the skis and took off. The ski trails make several interconnected loops on both sides of Oak Creek. We warmed up on the Big Spruce Loop, then headed south on the outside of Black’s Loop through a mix of oak and aspen. After connecting to Sunset Run, the forest opened up to an open, grassy field with views of the airport. We took the cut-through to Alpine Loop and the scenery changed to something more reminiscent of the North Shore. Huge spruce and fir trees flanked the way and their snow-laden branches pressed into the very intimate tracks. “It’s like skiing in a postcard”, Jen said.

After crossing Oak Creek (lively bubbling under the ice) a third time we climbed a very steep hill which made us wonder how they even get grooming equipment up there. On the flipside, Jen biffed it on the downhill that followed, but it was all good. When I got there, she had already climbed out of the deep hole she made in the loose snow next to the deck and was up again, smiling. We were now on the northern end of the trail system, but opted to skip Pit Run, even though a sign warned us we’d be “missing a good downhill”. Instead, we kept going on Alpine Loop and Ridge Run back to the parking lot. It was amazing what the groomers can do with less than ideal snow conditions and debris from a storm that had dropped some large branches, leaves and needles. Overall, the trail was in good, skiable shape, But after skiing about six out the 9km, the brewery was calling. 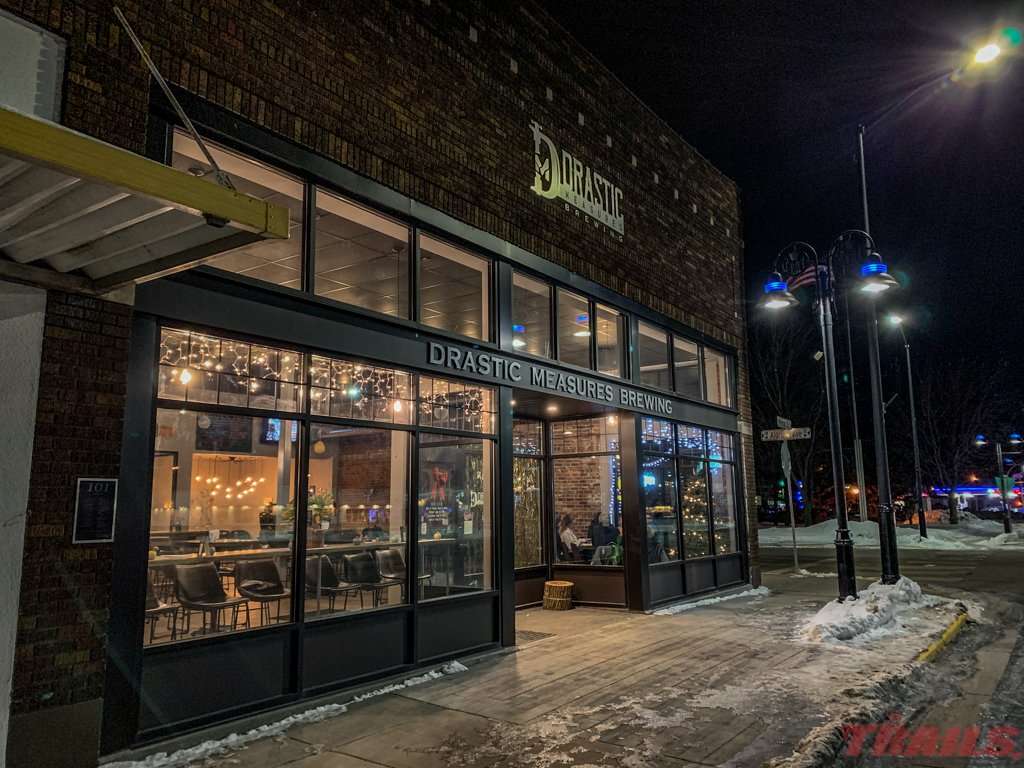 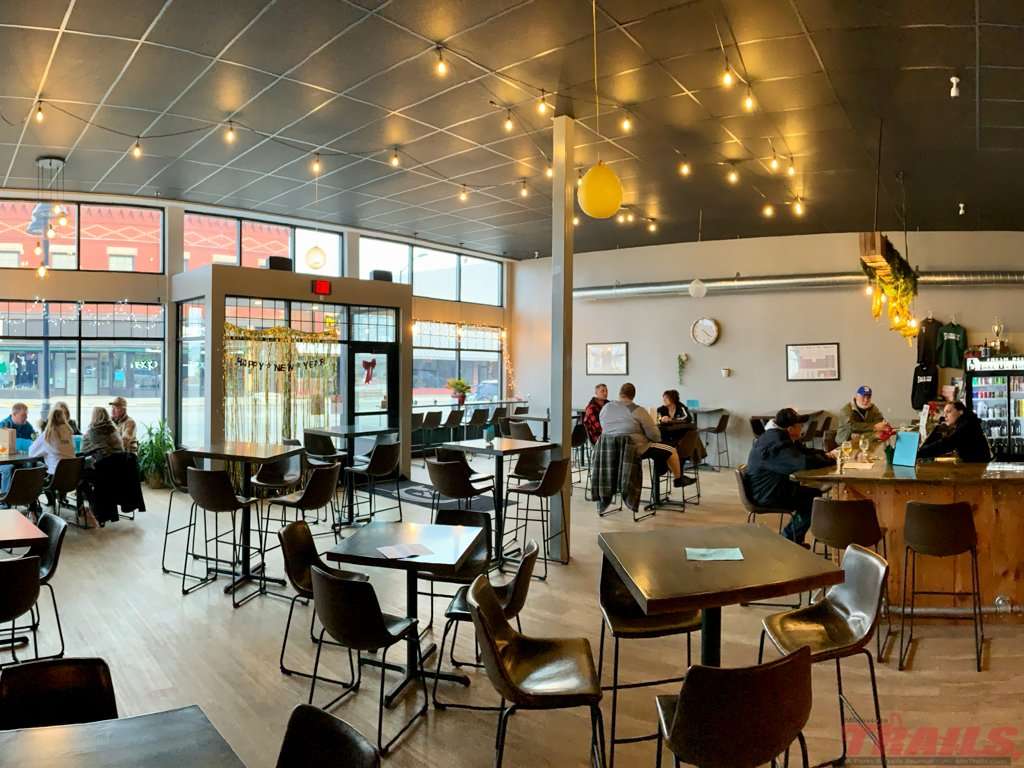 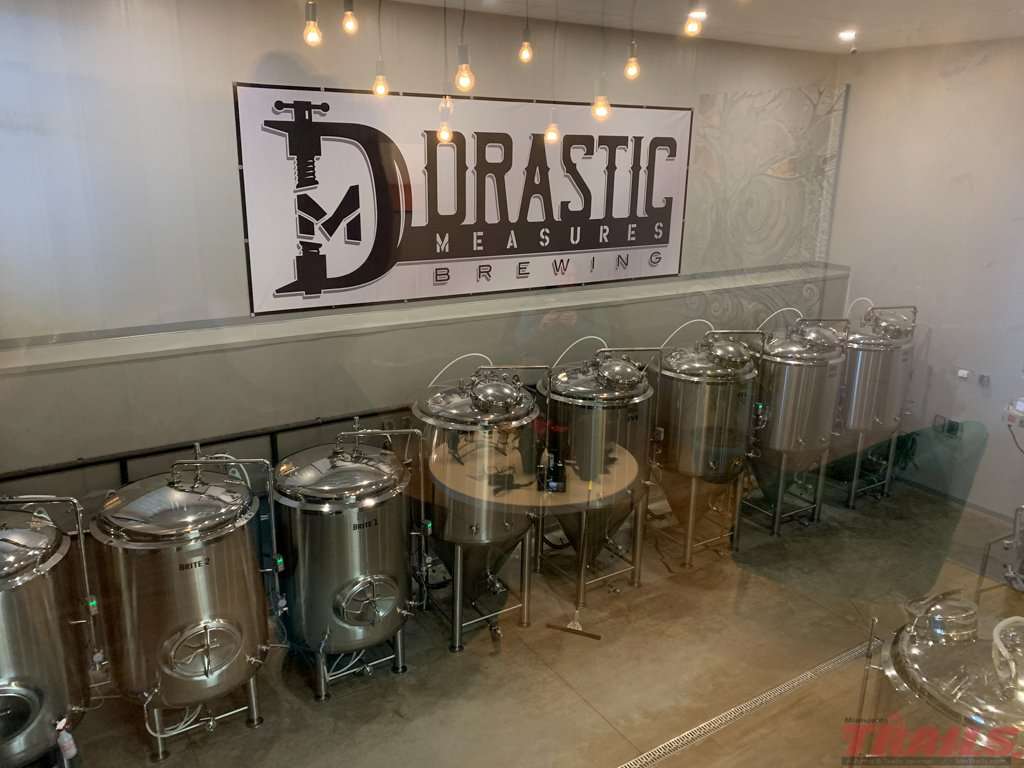 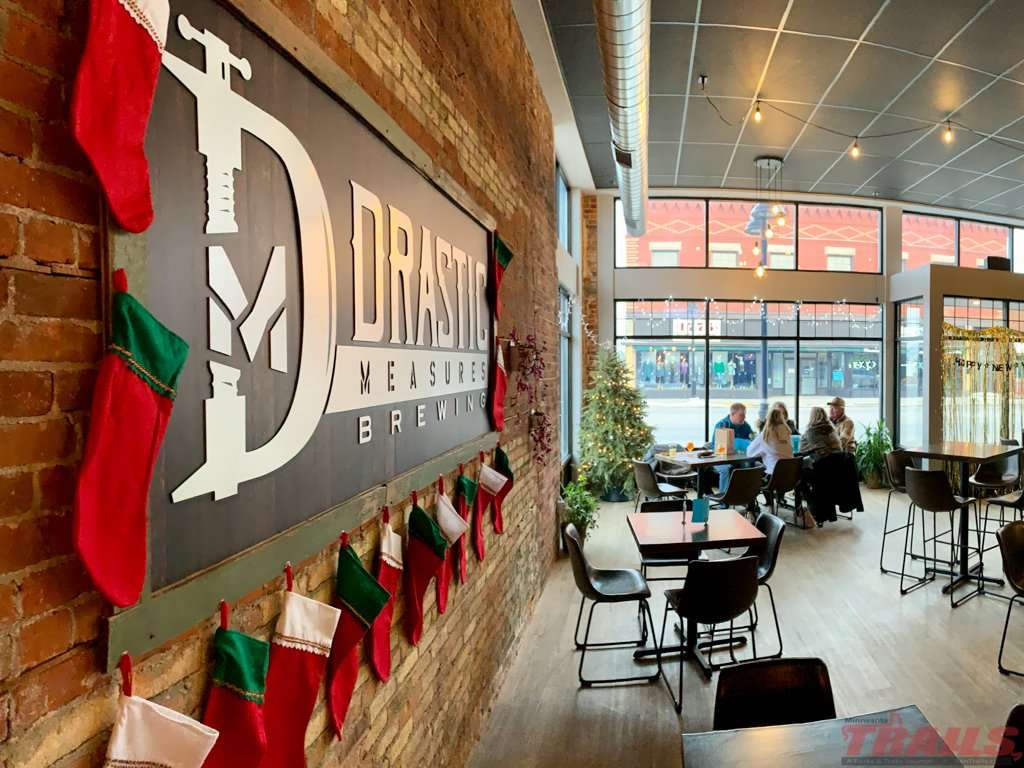 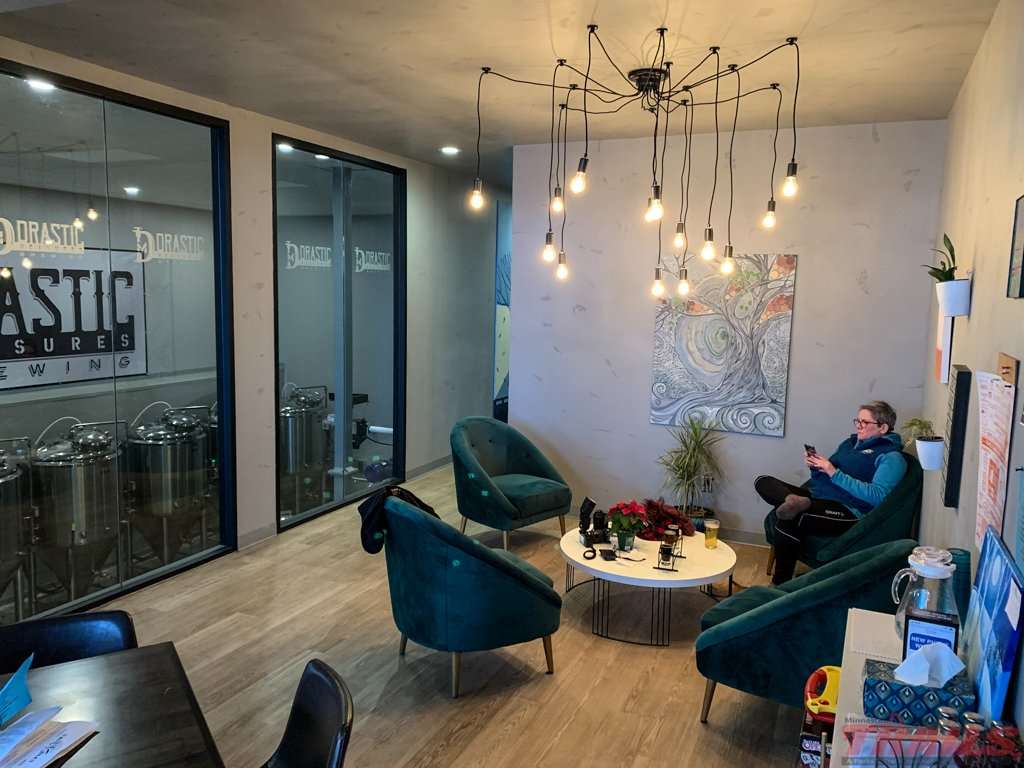 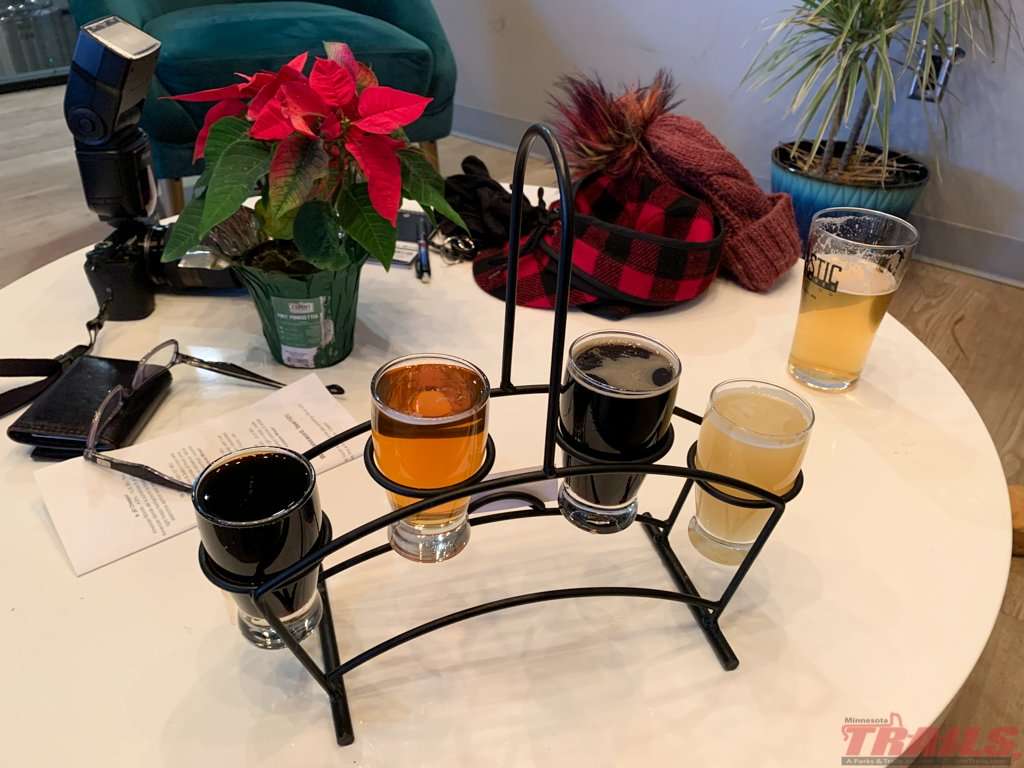 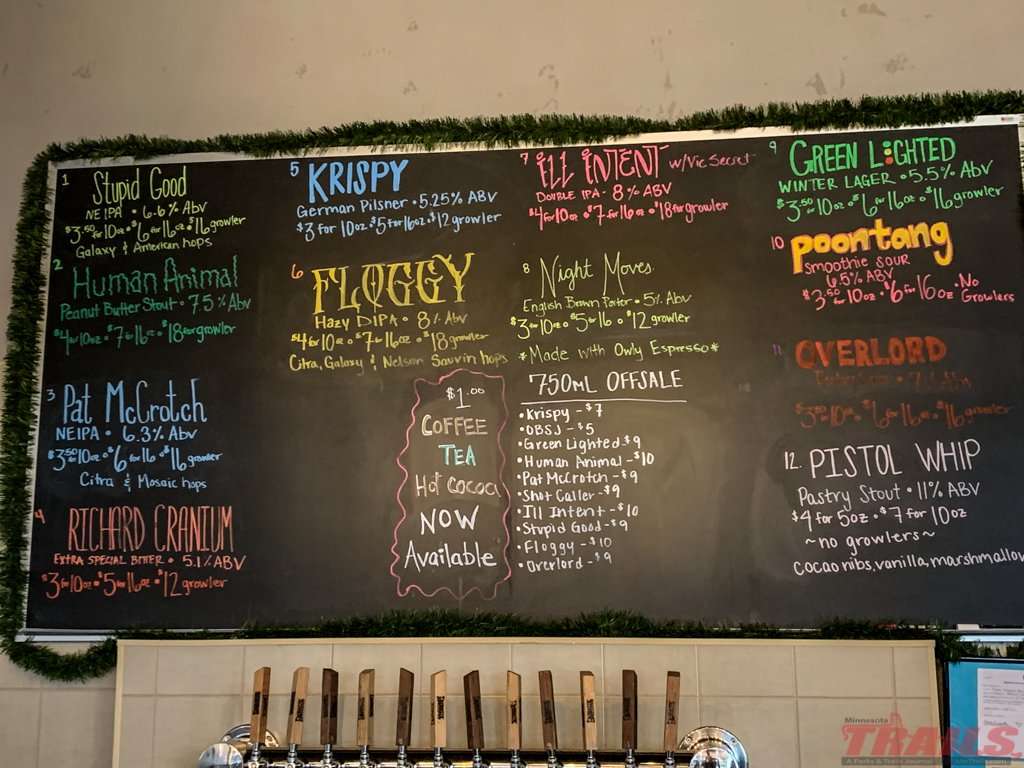 Drastic Measures Brewing resides in an old brown, brick building in downtown Wadena, just about four miles from Black’s Grove.  A modern window front takes up the entire width of what was once the town’s hardware store and lets in lots of natural light. Inside, high and low tables and chairs offer seating with plenty of room to move while a bar top in front of one of the windows means a great place to sit and watch people on Jefferson Street. On the far side of the spacious, open room is the bar with its tap handles, lit from above by Edison-style light bulbs hanging from a wooden beam suspended from the ceiling.

A hallway to the right leads to the attached restaurant, Eats N Ales, where you can order at a window and have food brought out to you. The whole room has an inviting, modern feel, even with the high ceilings.

A dozen or so people were hanging around enjoying their beers. Chelsea, our beer tender and owner of Eats N Ales, said it was unusually quiet for a Sunday. I wondered if it was because people were still sitting at home in their living rooms, wearing their Vikings jerseys and staring at the dead screen in disbelief, unable to move. Or maybe it was New Years resolutions.

We settled into a cozy alcove with vintage, blue velvet chairs where thick glass panels gave us a look at the stainless steel tanks in the basement. The first thing we noticed while reading the beer menu was the music. I swear they pilfered the old box of CDs out of my closet and played the tune of my youth: Soundgarden, Stone Temple Pilots, Pearl Jam, Cranberries. Chelsea said she’s “an oldies kinda gal”. Were the nineties really that long ago? (Yes).

The menu board had a good selection of styles, which should have something for everyone. If you’ve read this blog before you know that I tend to go for the heavier beers in the winter, so I went for the Human Animal peanut butter stout and the Pistol Whip pastry stout, and was not disappointed. Jen likes an all-day sipper, usually, and she took the Krispy German pilsner. My sample size serving of Pistol Whip was awesome. It was a perfect for an après ski warm-up with a whopping 11% ABV. It had a raisiny nose, and though super sweet, the cocoa nibs and vanilla it was aged on came through nicely, followed by molasses. Remember the Sam Adams triple bock that came in a small, cobalt blue bottle sometime in the not-so-far-away mid-nineties? It reminded me of that. Back then it was my first taste of how far you could push the definition of beer and it blew my mind.

Jen’s favorite was Krispy, the German pilsner. She prefers the lighter side and called it “Crisp, clean and well balanced.”   I’m not usually a fan of peanut butter stouts. Each thing on its own is fine, but the combo of the two rarely works for me. They always smell better than they taste, but I’m not giving up on the style, yet. The Human Animal was a wonderful surprise, because the peanut butter taste hung around in the background and didn’t come out like a jar of Jif hitting me in the palate. At 7.5% ABV and only 35 IBU, It was a very good follow-up to the Pistol Whip and rounded out my day of skiing and exploring trails. I could totally sip a couple of those by a fireplace.

Brett and Ashley Doebbeling opened Drastic Measures Brewing on March 14, 2019 with 16 other investors backing the project. While Ashley manages the taproom, Brett is in charge of brewing and he says he fell in love with the craft after his mom bought him a Mr. Beer homebrew kit when he was a teenager. Now he brews about 1000 gallons a week on a 10bbl system, and five 10bbl fermenters keep the taproom supplied. By the time you read this post, Drastic Measures will have added two 20bbl fermenters to their production line and will start distributing four-packs of 16-ounce cans to North Dakota in February. “The community’s reaction has been awesome”, Brett said and noted that he’s seen a huge boom in downtown Wadena’s economy since the brewery opened its doors. A move, he said, that meant taking drastic measures.