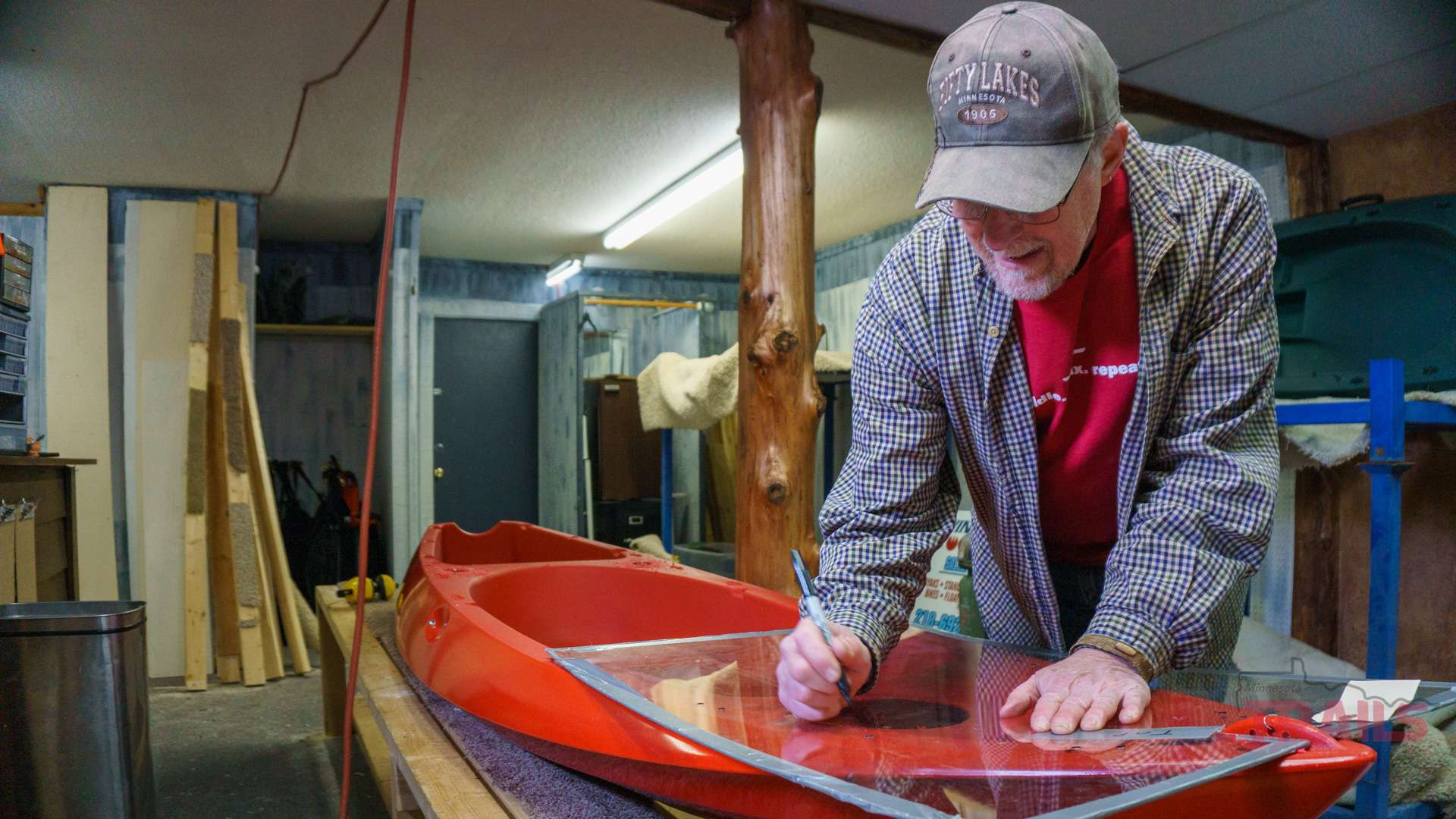 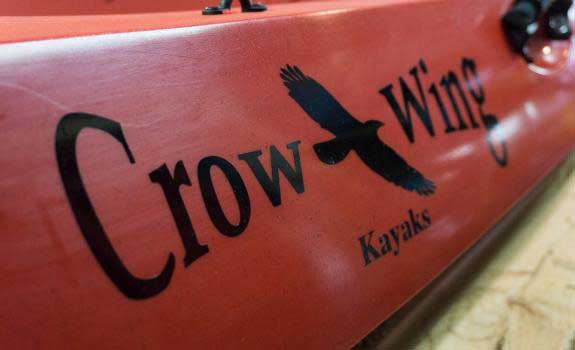 “The roof on the old building leaked so bad, you could try out kayaks in the store,”he says and laughs.

Here, in a small shop on the east side of Cross Lake, in the town with the same name, he’s been making customized kayaks since 2012. 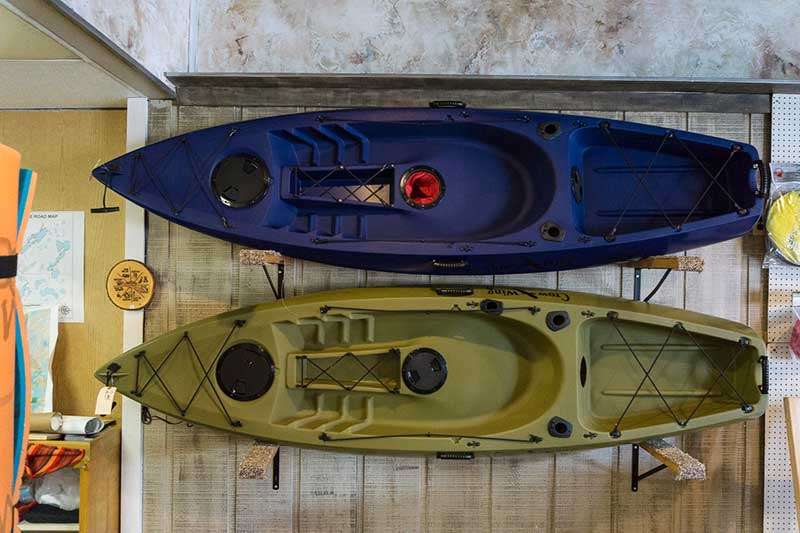 Various models line the walls of the showroom

The front of the store is Crow Wing Kayaks’ show room: Different models and colors line the walls, others are displayed on racks and share the small space with t-shirts and paddling accessories. The back of the long and narrow room houses the shop where Jim assembles and customizes his kayaks. 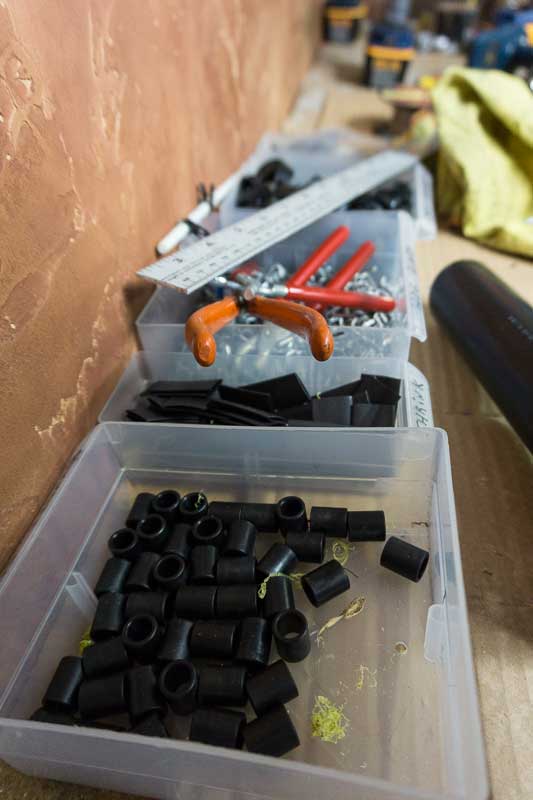 Parts bins on the workbench

“The shorter model is our most popular one”, he says. “You don’t need a watercraft license for a kayak under ten feet.”

The base model comes with front, rear and side handles, drain plug, storage hatch, center and rear storage compartments, paddle holders and a back brace. From there it can be customized with extra cargo hatches for touring or a variety of fishing rod holders for anglers.

“Some people buy the base model and come back later to have an extra storage compartment or rod holder put in.” he says. “You can fit it to whatever your needs are.” 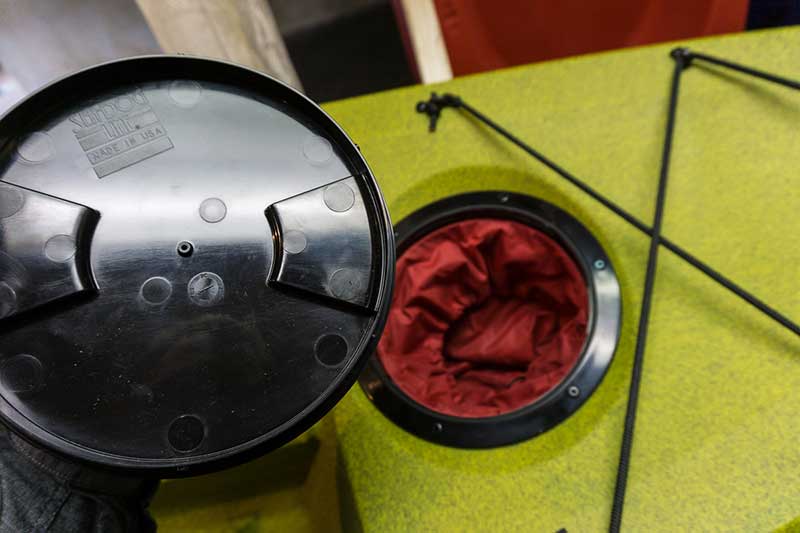 Crow Wing Kayaks come in 5 colors, one being an accidental creation. “One time they put in too much black speckle into the yellow mix and at first I thought ‘Nobody is going to want this.'” he says. “We had a Facebook contest to find a name for it and ‘Grolive’ was the winner. It’s now our most popular color.” 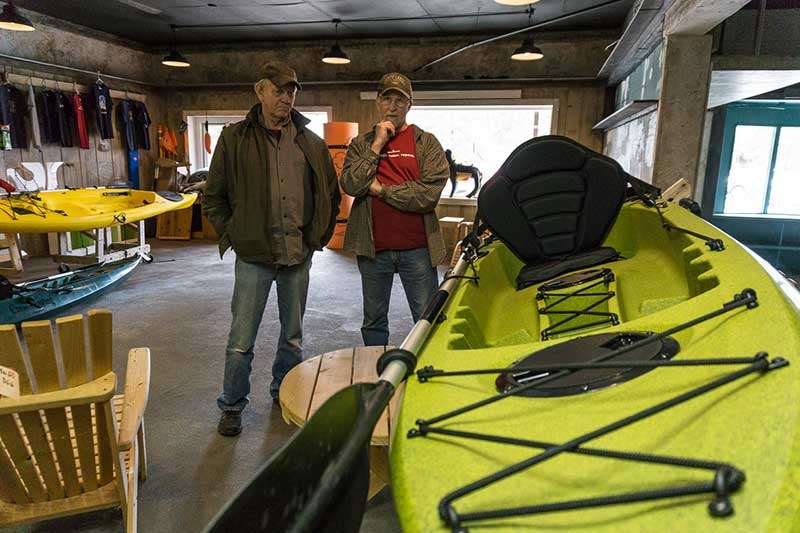 Mistake turned best seller: VonBerge and Bergquist talk about the color of grolive

It takes about an hour to assemble a basic model. Dan VonBerge, retired cabinetmaker and shop helper, designed the shop fixtures that now greatly speed up the process. Each vessel starts out as a 48-pound blank, roto-molded by Stern Industries in Brainerd.

After cutting and drilling holes into the polyethylene shell, Jim screws and rivets the hatch, drain plug, drag handle, paddle holders and seat straps in place. The hatch ring and drain plug collar are sealed with marine grade silicone and also riveted. Each kayak receives a hull ID number and is then ready for the decals and a final cleanup. 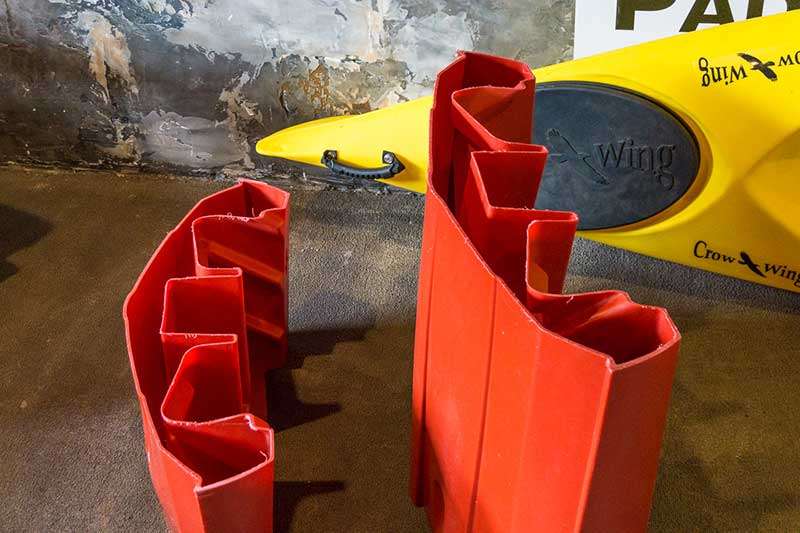 Cross-section of a molded blank 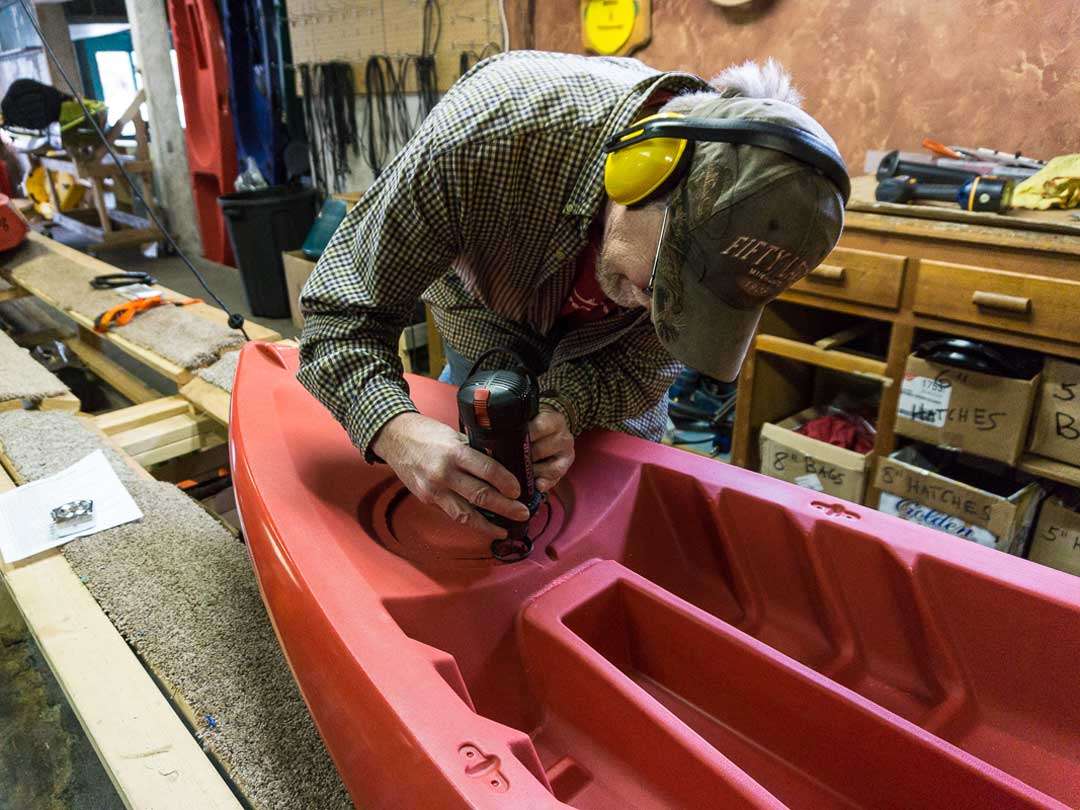 Jim Bergquist cuts the hole for a storage compartment 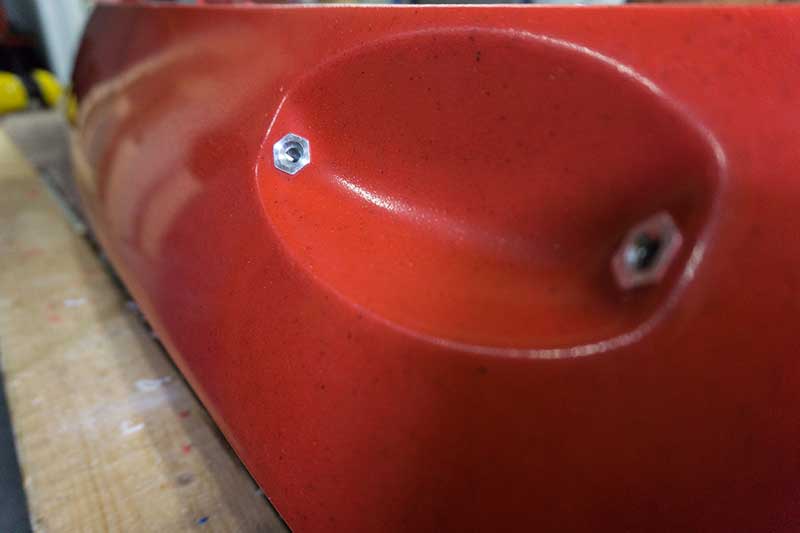 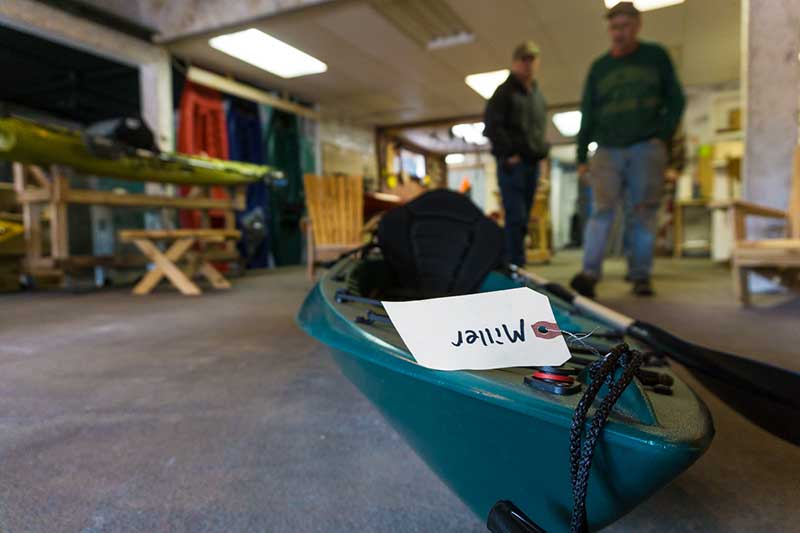 A finished custom kayak is waiting to be picked up

The assembled weight is 55 pounds and each kayak can manage up to 315 pounds of cargo, including the captain. “The extended keel gives you a bit more stability in the water.” Jim says.

Right now Jim is busy putting the finishing touches on his larger shop and showroom and hopes to expand his distribution network. Crow Wing Kayaks are sold from the Crosslake shop and through dealers in Michigan, Wisconsin and Minnesota. “Starting this year, you can rent them at Itasca Sports in Itasca State Park, too.” he says.
In the next weeks, a large shipment of hull blanks is due to arrive at the shop. Jim looks around the small space and says: “Guess I’ll need to make some room.”

Jim’s Bio:
Jim grew up in south Minneapolis. After studying political science and history at the U of M, he moved to southwestern Minnesota where he farmed sheep for ten years. He then moved to Prior Lake, MN and sold real estate for 20 years.

In 2005 he moved to Crosslake and took over Crow Wing Kayaks in 2012. He is an outdoor enthusiast who especially loves paddle sports and founded the Crow Wing Paddlers in 2014. This 70-member group gets together for regular excursions on the many lakes and rivers in the Crosslake area.

In the cover of darkness we snuck across the border to do some biking and fishing. Turns out we may have to do it again soon.

A canoe trip on the Mississippi deserves a pint at Saint Cloud’s Beaver Island Brewing Company.

Our work on the way up was rewarded with glorious roll after glorious roll, the ribbon of trail disappearing into the distance and around the next curve.