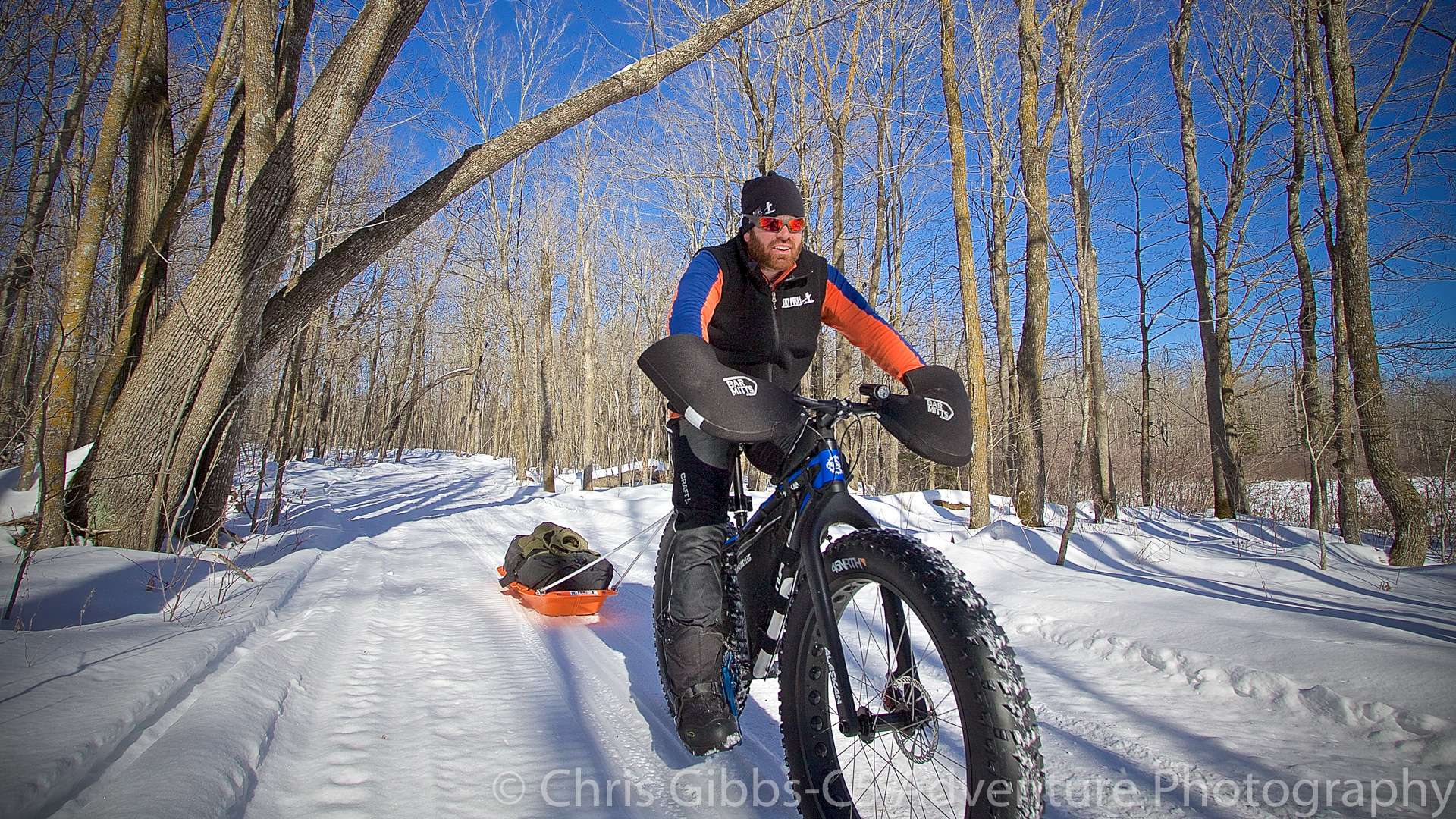 This article originally appeared in the 2016/17 Minnesota Trails winter issue.

Grant Schnell has been in love with the Outdoors as long as he can remember and he has a wild side. “I’ve always enjoyed being active, camping and biking and sharing those experiences with others”, he said and beamed a big smile through his red beard. “We’re all so overwhelmed with electronics in our daily lives and being outside gives me much-needed solitude. I can focus on the ‘right here-right now’ and I don’t have to think about yesterday or tomorrow”, he explained. In 2002 he bought his first mountain bike and turned casual biking into a ‘serious recreational pursuit’. Then came winter camping, which he says ‘brings a certain simplicity to things’. “Staying warm, hydrated, fed and sheltered are the only things you need to think about”. 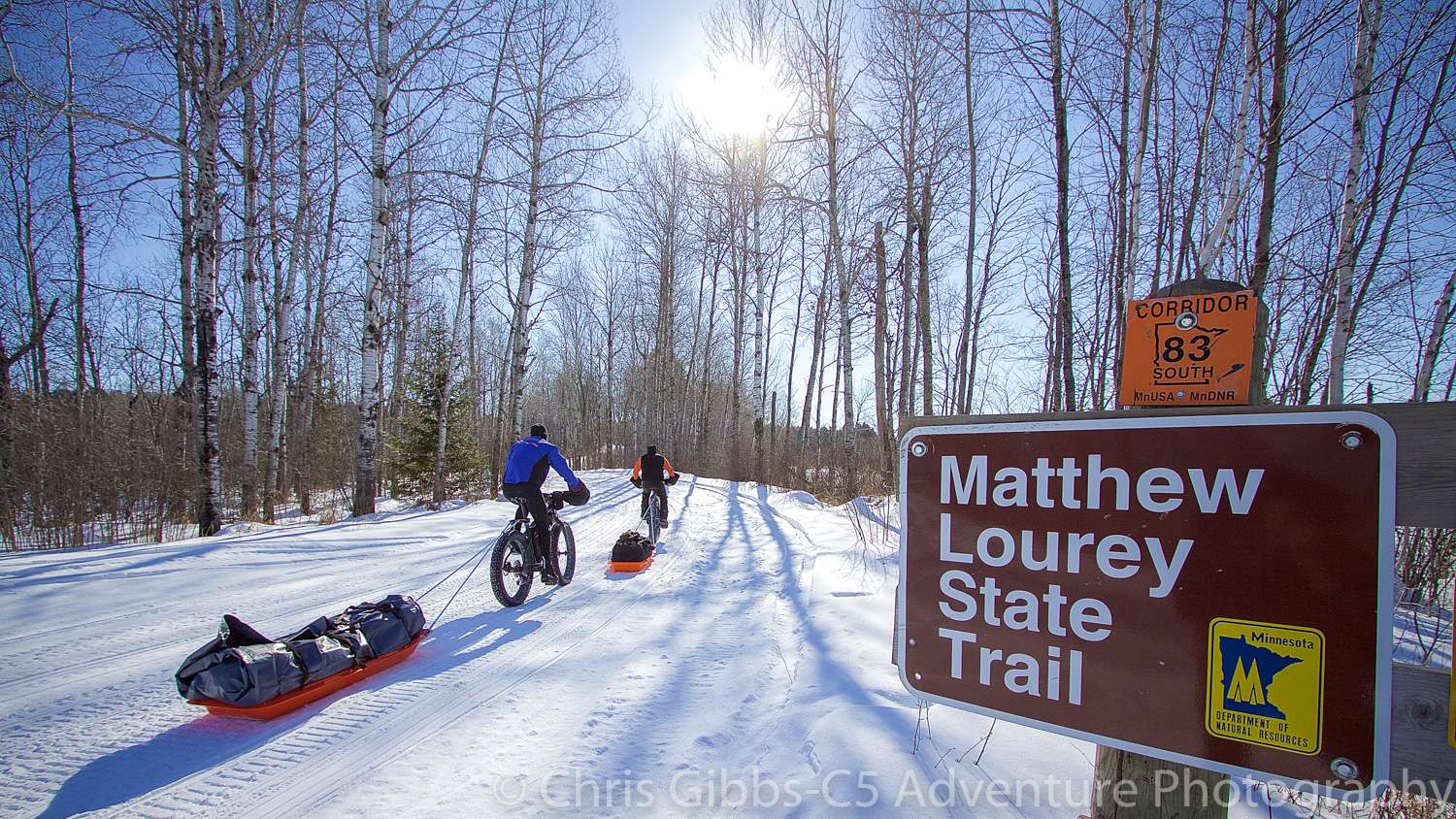 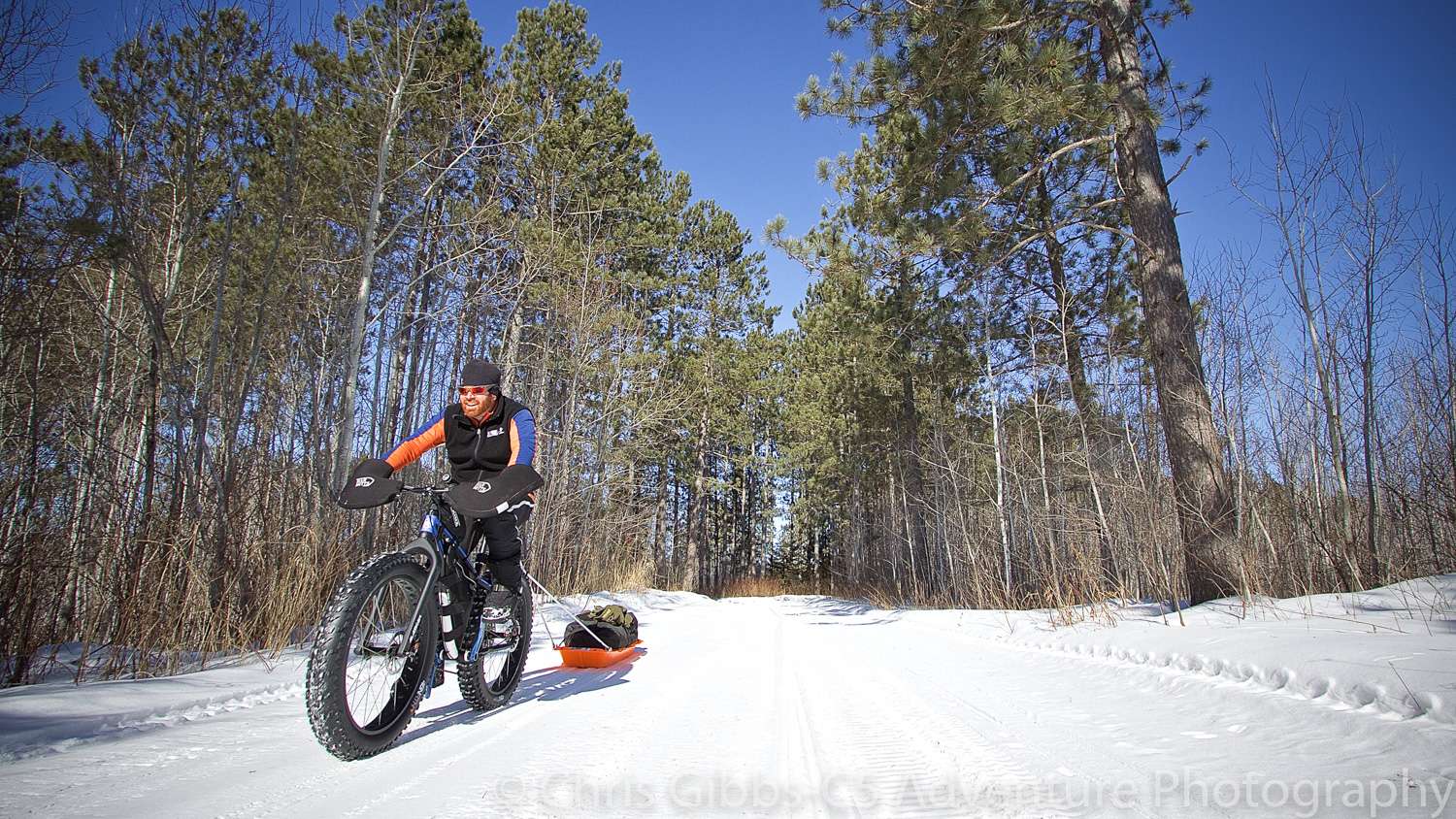 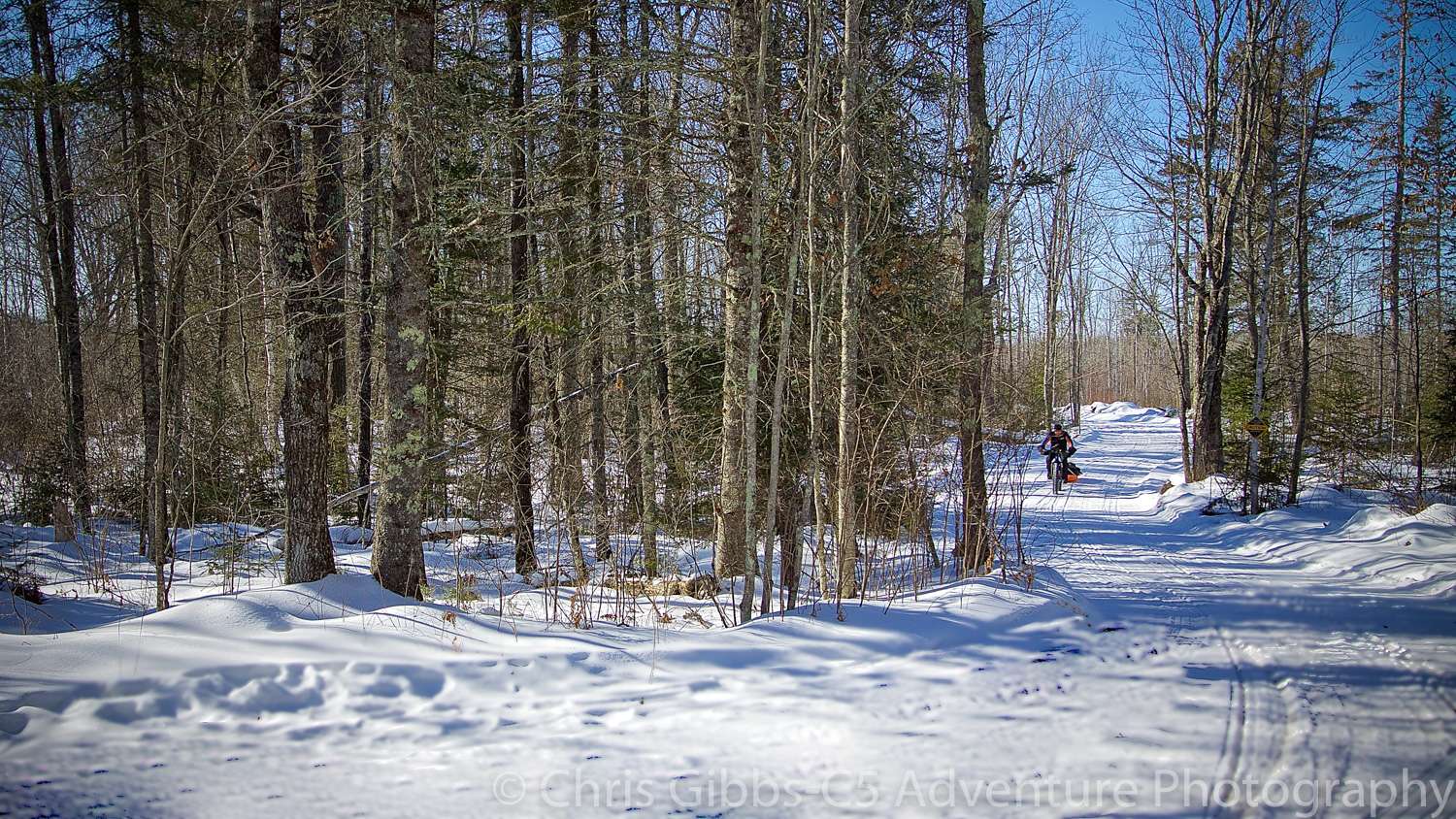 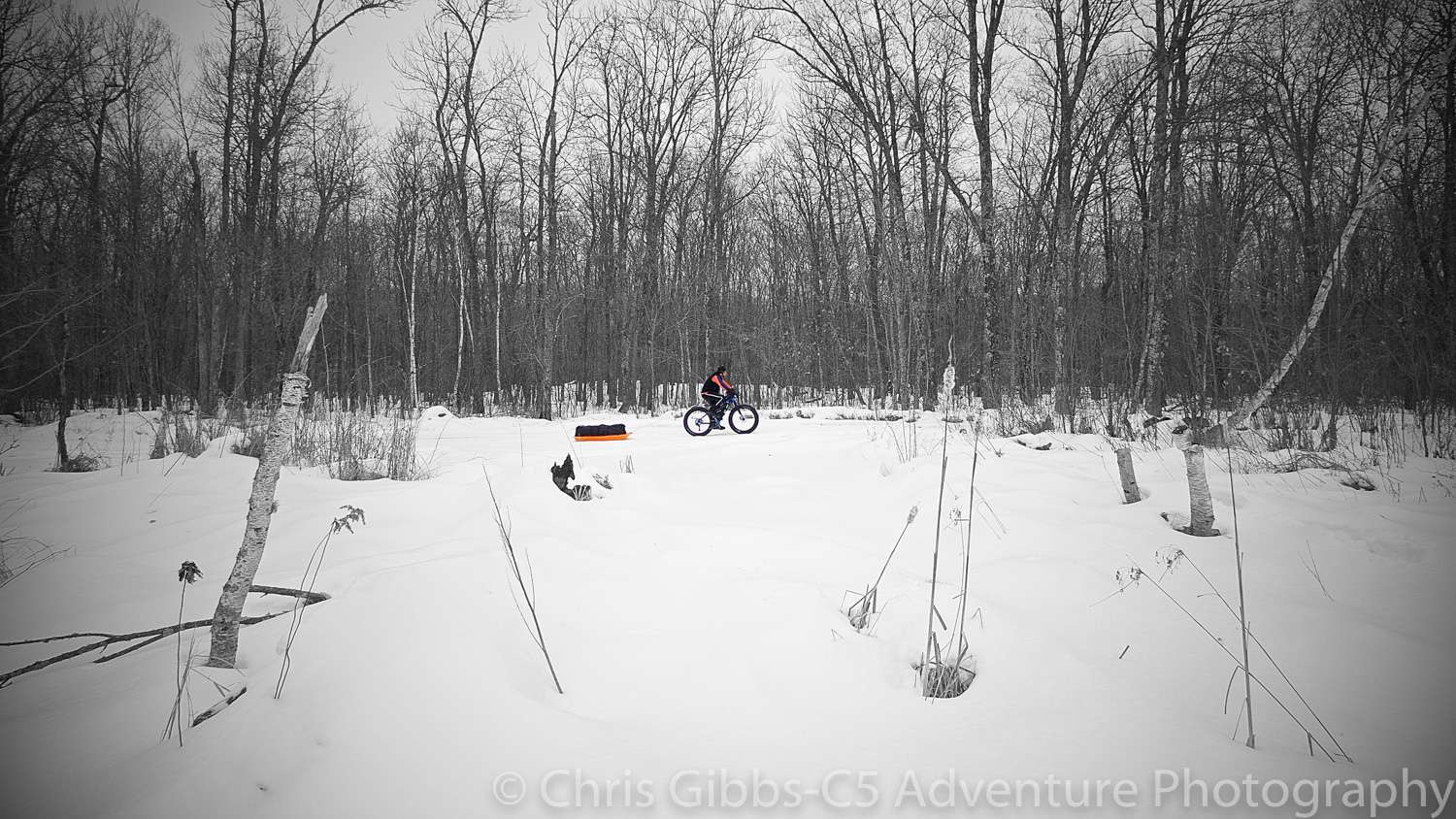 With the coming of the fat bike, it didn’t take long for him to make plans for a winter fat bike camping trip and friends Chris Gibbs and Seth Downs decided to join him.  “I was after the wilderness experience, which you can’t have on most fat bike trails available today”, Schnell said. Planning a winter fat bike adventure like this takes some special considerations, because there are some unknowns. “None of us had ever done a trip like this on a fat bike, without a road or town within 30 miles”, he said. “We could only plan ahead so far, because of the snow conditions”.

After a year of planning that kicked into high gear about two months before the trip, they settled on overnight camping on the Matthew Lourey State Trail because it was close to home, easy to access and state forests allow dispersed camping without designated campsites. “We checked with the DNR about snowmobile traffic and were told to use caution and wear bright clothing”, Schnell said. “We also used front and rear lights and rode only in the daytime”.

The 80-mile Matthew Lourey State Trail snakes its way up Minnesota’s border with Wisconsin from the Chengwatana State Forest near Pine City, crosses St. Croix State Park and then turns north into the St. Croix and Nemadji State Forests.

The group of three planned on a three-day, 50-mile ride from Pickerel Lake near Nickerson in the Nemadji State Forest back to a second car they had parked at the southern end of the St. Croix State Forest. A compass, maps and GPS-enabled speedometers helped them stay on track. Each of them hauled 35 pounds of gear with a Pulk, a kind of sled, attached to their bikes with a special bracket Schnell designed. “It was like riding on a dream”, he recounts riding the first few miles. “The trail was freshly groomed with a foot of hard pack and 18 inches of snow cover in the woods and we were making better progress than anticipated”. 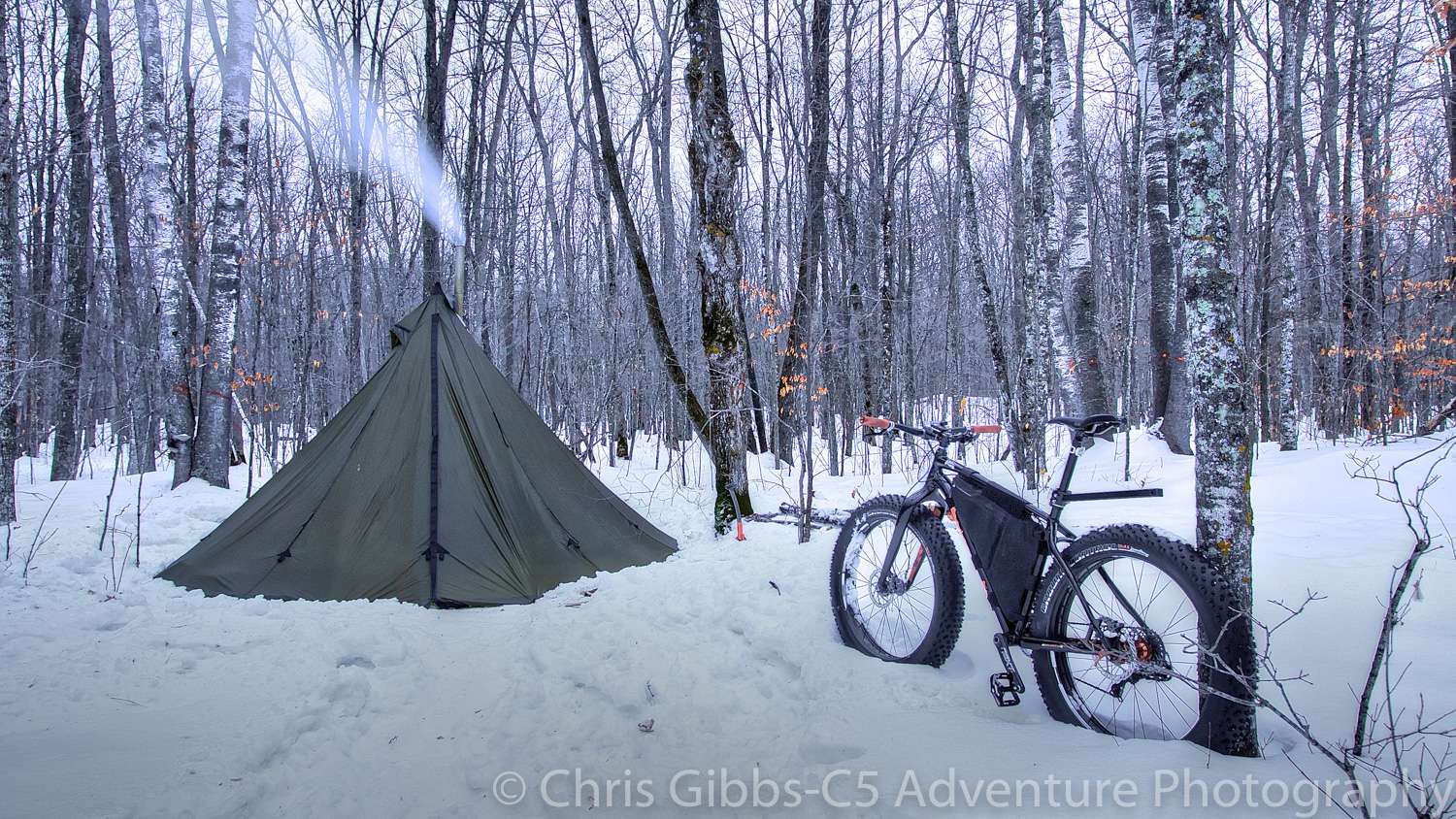 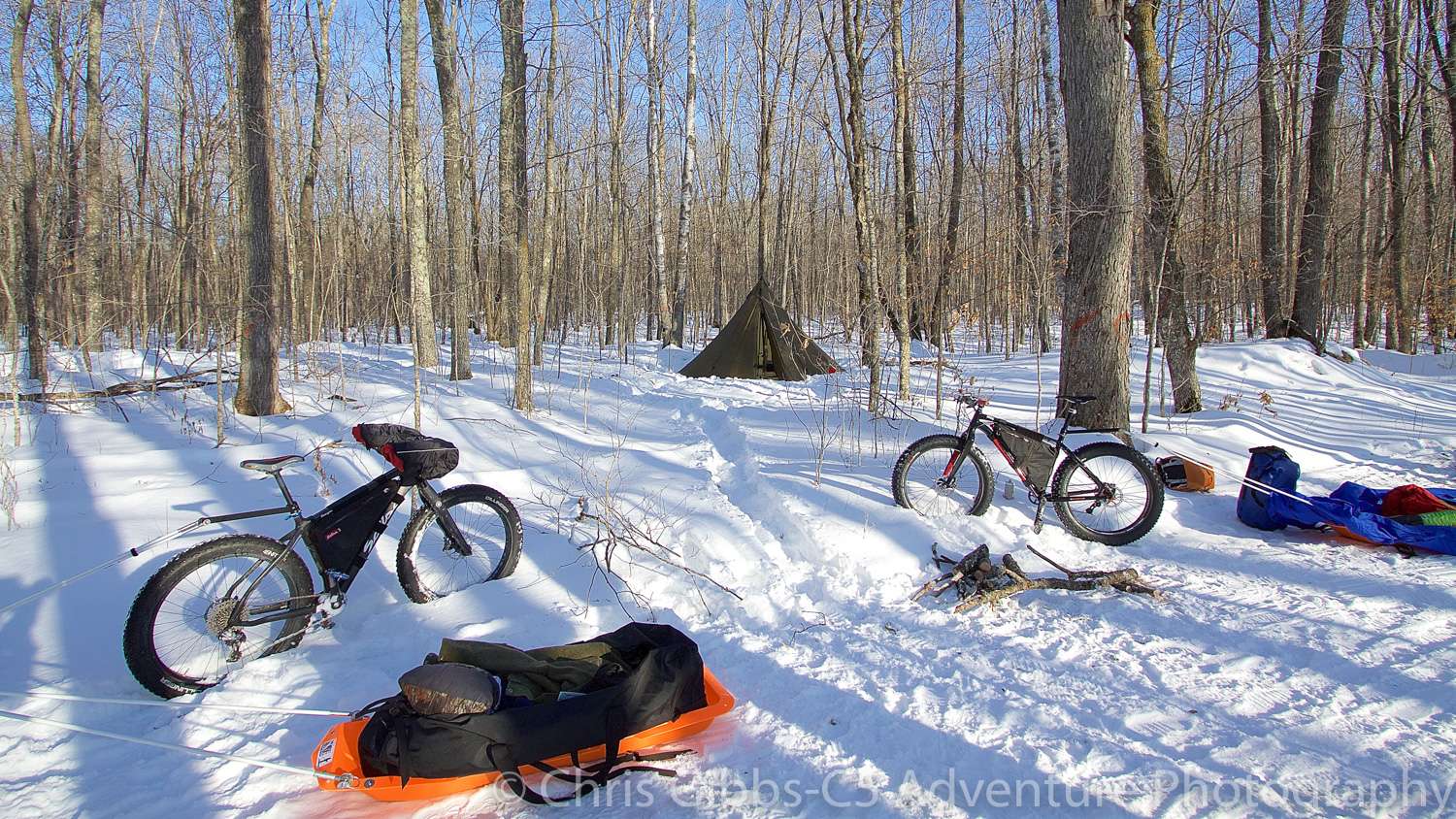 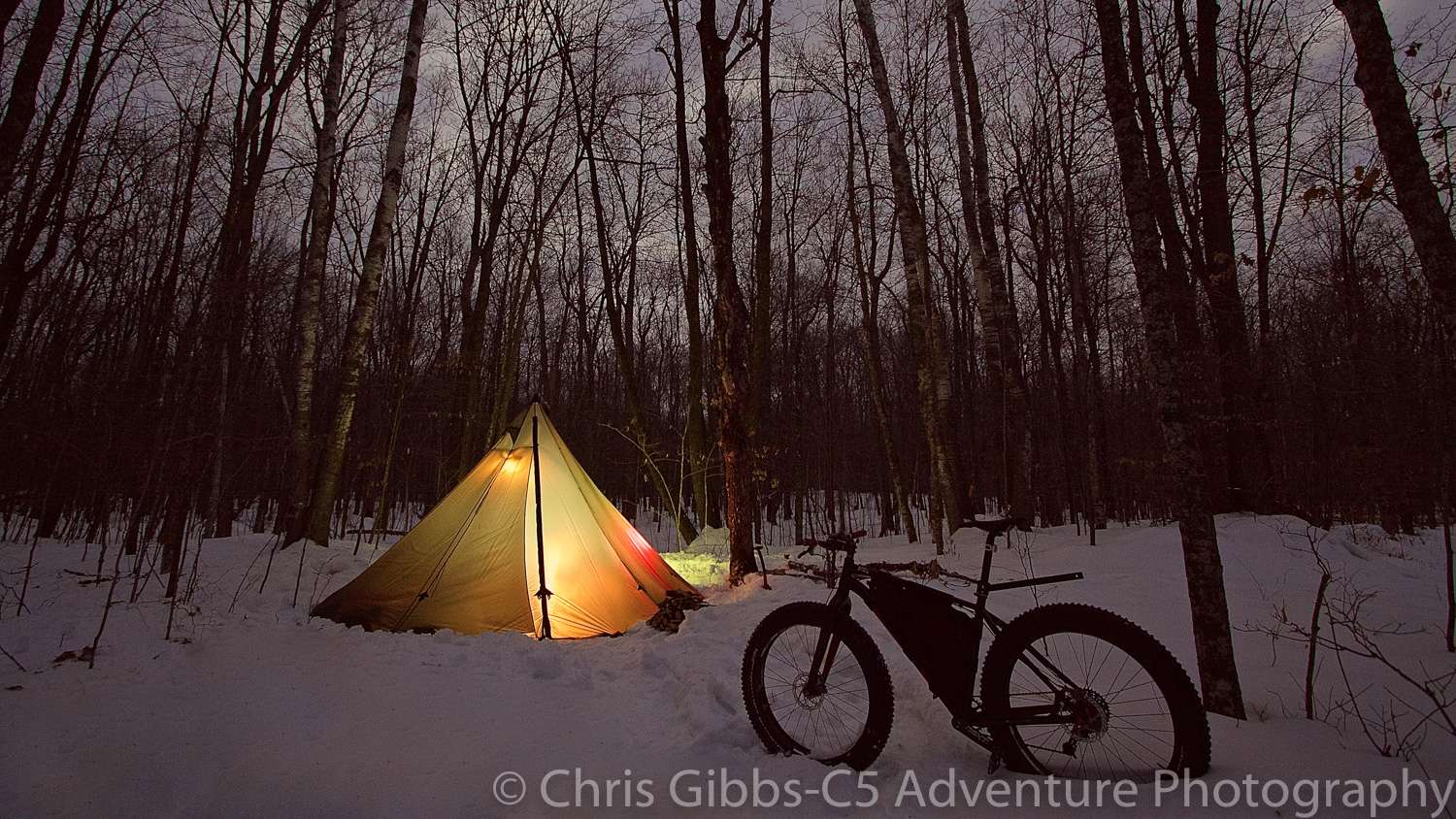 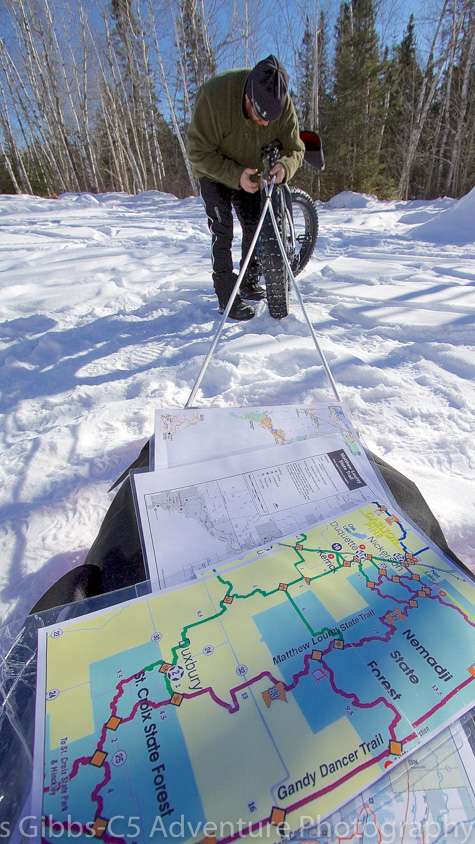 The fat bikes performed well, too. “Eight pounds of tire pressure gave us a good grip on the snow and we never had to change it”, Schnell said. “At one point we were going down a hill at 25 miles an hour”.
After 25 miles of rolling hills and crossing frozen creeks the group decided to make camp for the night. “When you get to your campsite, the work is just beginning”, Schnell said. Unlike summer camping, staying warm is first priority. The three of them worked together: Schnell cleared an area and put up the six-person tipi. Next was a tarp, because the nylon-walled tent has no bottom. Then insulated sleeping pads and down sleeping bags. Meanwhile, Downs and Gibbs cut downed trees for firewood. The whole procedure took about an hour. Once the fire was started in the lightweight titanium wood stove, the tipi warmed up in minutes and they cooked dinner. “Once I ate and laid down in the warm tent, I struggled to keep my eyes open” Schnell said. “I was out by 7:30”.

Back on the trail the next day, they saw the temperatures creep up and trail conditions deteriorated. “It was getting really warm, the snow was getting thinner and our tires started to poke through the crust”, said Schnell. Temperatures above freezing and rain were in the forecast for the following day and the group decided to cut the trip short and finish on the second day. It turned out to be the right call. “Thirty miles later we made it back to the car and it started raining on the way home”, Schnell said.

His next trip might take him to the 150-mile C.J. Ramstad/North Shore Trail, which is even more rugged. “That would be wild”, he said and flashed a smile.

Grant Schnell is a Recreational Therapist who works with children, adolescents and adults. He is also owner of SkiPulk.com, where he makes pull-behind sleds for skiers, snowshoers, racers and fat bikers.

All photos are by Chris Gibbs and C5 Adventure Photography.

October Fun Walk with the NSTT

Join the North Star Trail Travelers on a fun walk at Afton State Park this October.

The Year of the Fat: First Quarter

The Year of the Fat in which I’ll ride only my fat bike.

Save the Date for These 2022 Bike Rides!

Put these rides on your calendar early and ride some of the best Minnesota and Iowa have to offer.

Visit these central Minnesota state parks for a weekend of non-competitive walking for all ages.

From leisure rides with the kids to the ride of your life, don’t miss these epic events!