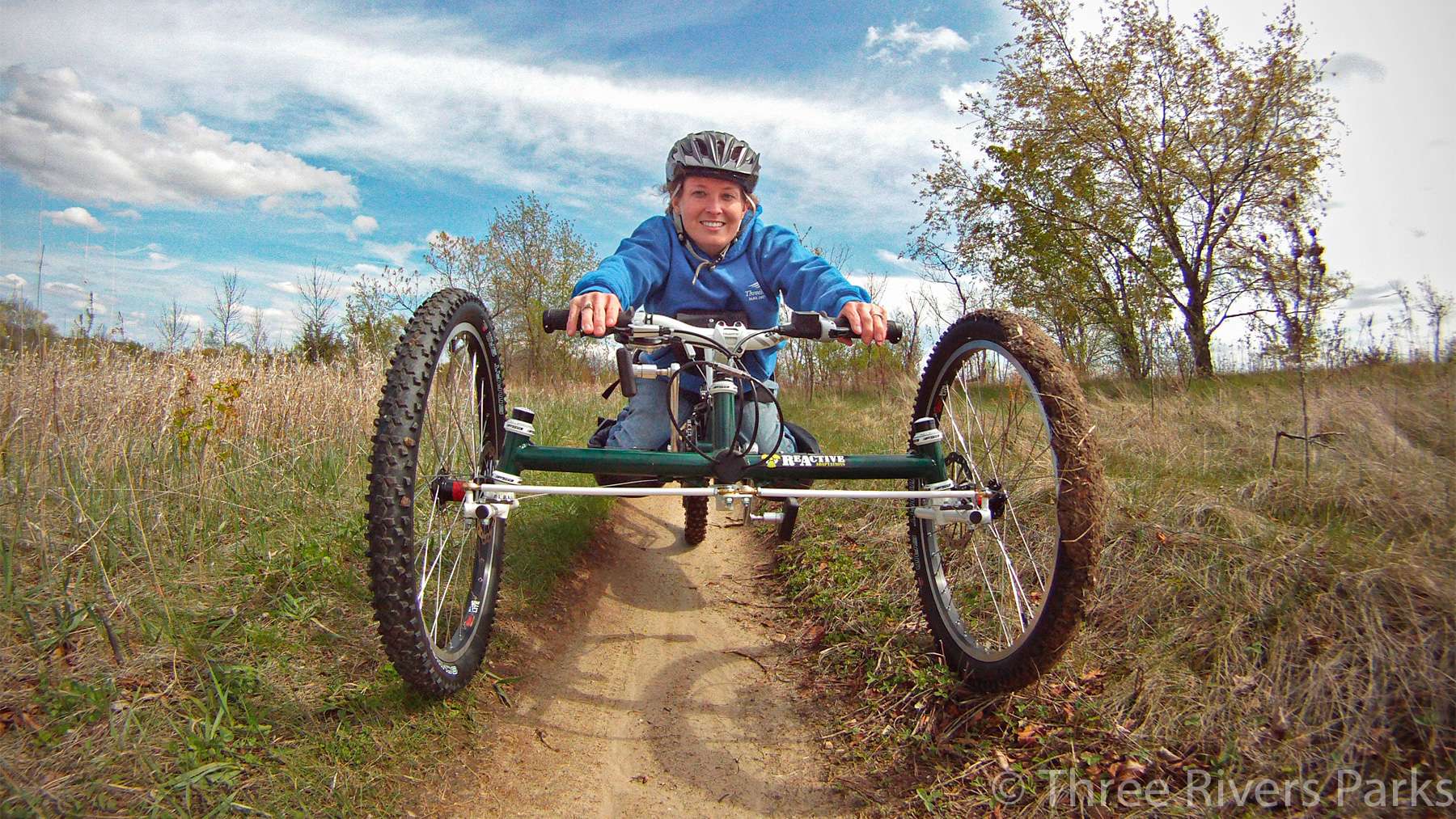 For Sam Tabaka, mountain biking is a great way to get out into the woods and see wildlife in nature. “For people with disabilities, it’s not always easy to do that,” he said. “You can’t really hike into the woods if you’re using a mobility device, so mountain biking provides a way to access those areas.”
Tabaka is an Outdoor Recreation Educator at Three Rivers Park District, which is made up of 27,000 acres of parkland in the seven-county metro area.
He started and currently leads the Adaptive Mountain Biking program, which offers equipment, training and community to people with disabilities.

The Adaptive Mountain Biking program at Three Rivers Park District began during the development of the singletrack trail system at Elm Creek Park Reserve in Maple Grove. “We had great trails,” said Tabaka, “but we didn’t have access to the bikes we needed.”   Adaptive mountain bikes, also called off-road hand cycles, are typically three-wheeled, recumbent-style bicycles that are powered by hand instead of by foot. They have a larger footprint than traditional mountain bikes, so they require wider trails for riding. They’re also very expensive, some costing over $10,000.

The program got off the ground after Three Rivers purchased three Nuke model hand cycles from Reactive Adaptions in Colorado. Then it was about getting the word out. Tabaka and others reached out to Allina Health’s Courage Kenny Rehabilitation Center, the VA and other local organizations that facilitate adaptive recreation. “We talked to people who were already participating in other adaptive programs, like skiing,” said Tabaka. The team also held open houses, advertised in their program calendar, and hosted free riding days to get people interested and give them a chance to try out the sport.

Alex Van Horn is an avid participant in Three Rivers Parks District’s adaptive mountain biking program. She tried it for the first time in 2016 at an Adaptive Demo Day at French Regional Park, hoping to find more ways to spend time outside. “I missed being outdoors and having that sense of community and fulfillment,” she said. She enjoyed it so much that she has continued riding one of the rental bikes and recently decided to seek out her own equipment.
“After 5 years, I realized that to expand the program [at Three Rivers] we needed more bikes to be available for other people to use,” she said laughing. “It pushed me to want my own bike.” Van Horn was recently awarded a grant through the Kelly Brush Foundation and will receive her bike in April.

Tabaka says there’s no experience required to try mountain biking through their adaptive program. Three Rivers Parks District has trails at three different parks – Elm Creek Park Reserve in Maple Grove, Murphy-Hanrehan Park Reserve in Savage and Carver Park Reserve in Victoria –made for or well-suited to handcycles. Each offers a different experience, and some are more challenging than others.
“The new trails [at Carver Park Reserve] are nice because they intersect with paved trails, so if you’re not feeling confident or comfortable riding on a dirt trail, you can take a mellow ride on a tar trail,” said Tabaka. His favorite trail is Raptor Ridge, part of the Monarch Singletrack Trail at Carver Park Reserve.
Van Horn likes the trails at Elm Creek best. “The shorter trail is a great beginner trail,” she said. “There are no obstacles, and you can just be in the trees.” She likes the longer trail for a good workout.

A Place to Get Going

Three Rivers’ Adaptive Mountain Biking program has grown significantly since its early days. Tabaka estimates participation has tripled, and they’ve also added more bikes. Their fleet of five handcycles includes a few different models, so there’s something that’ll work for most riders. While many handcycles require riders to be able to grip the equipment to control it, Three Rivers’ newest bike has electric assist and different methods of breaking, shifting and pedaling that don’t require squeezing or gripping.
They regularly offer Adaptive Demo Days where people can talk to staff and try out all of Three Rivers’ adaptive equipment, including paddleboards, kayaks, geocaches, cross-country skis and of course, handcycles. Riders can also arrange private appointments and lessons through Three Rivers’ Outdoor Recreation School. This spring, they’re starting their first adaptive mountain biking club.
“I’m pretty grateful that they’ve been putting a lot of effort into expanding the program at Three Rivers,” said Van Horn. “Everybody should have a way to get outdoors. You have to have a place to go to get going.”

The new Redhead Mountain Bike Park opened a few weeks ago and the Mesabi Trail has added more miles. Time to visit the Iron Range again.

Fall Fun Walks with the NSTT

The NorthStar Trail Travelers (NSTT) are heading north in September, and you’re invited.