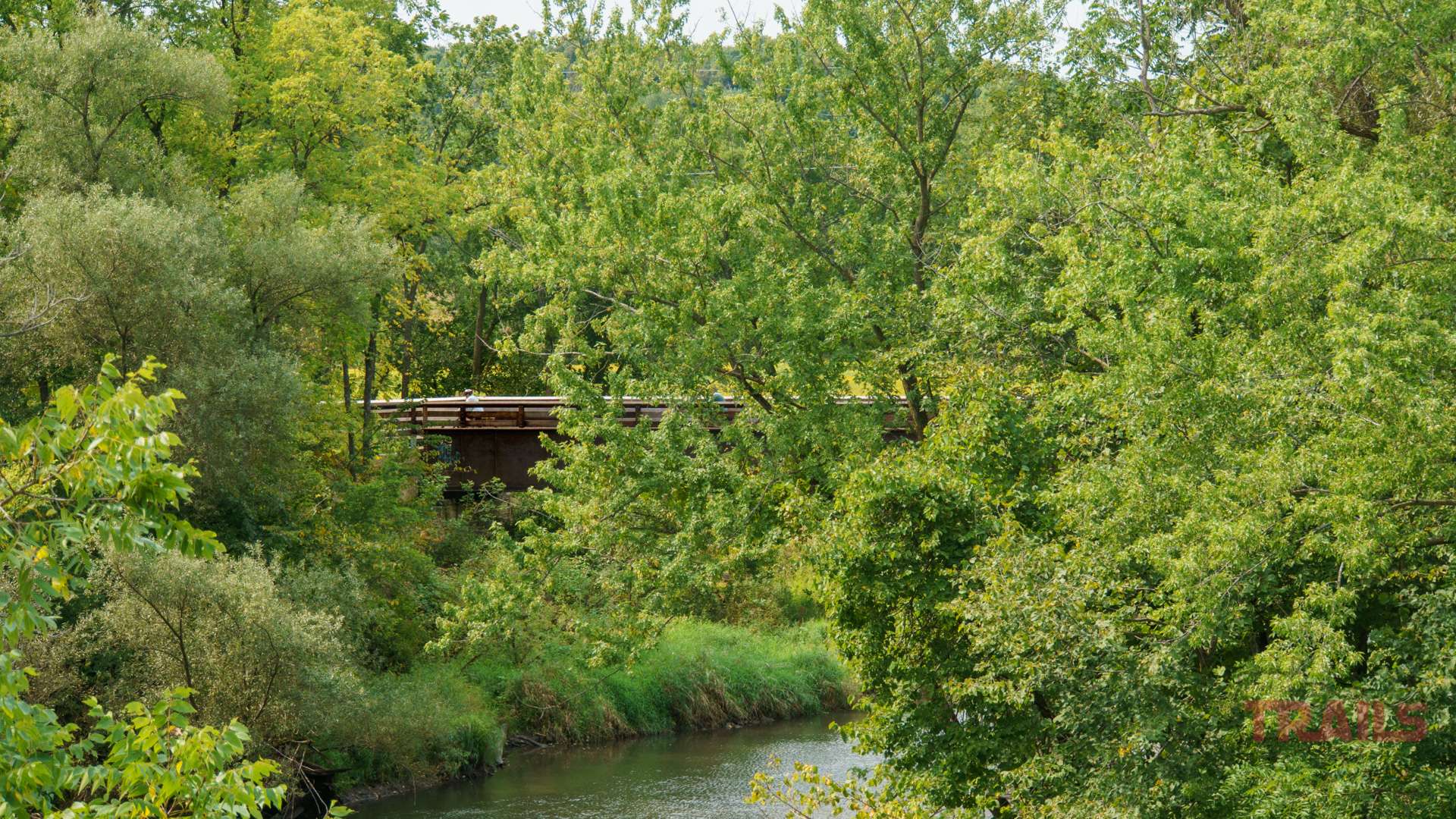 The Douglas State Trail has long been on my list of places to visit and pair with a pint at one of Rochester’s breweries.  When I heard that a new brewery was opening up in Pine Island, there was no more procrastination. It was time for a double header.

The Douglas State Trail is a pleasant 12-ish mile ride between Pine Island and Rochester via the town of Douglas. It’s the perfect out-and-back ride and it connects with Rochester’s extensive city trail network. It’s short, but given the proximity to Rochester and the outstanding scenery along the way, it’s a very popular ride. The abandoned railroad grade is flat and crosses the Zumbro River several times as you bike through gradually changing scenery. Coming from Pine Island, farms and fields give way to homes and industrial buildings the closer you get to Rochester, but for the most part you’re in what I call a “Tunnel of Trees”, a result of nature getting its way for many years in the abandoned railroad corridor. Some of the cottonwoods have grown up to impressive size and provide plenty of shade as their crowns touch above your head.

We took off from Pine Island on a sunny Saturday morning and within the first mile had already crossed a couple of bridges. A few miles farther down the trail, we came to a tunnel near Pine Island Elementary School where another trail split off. Clearly, the Douglas Trail continued through the tunnel, but where did this other trail go? Jen and I both thought it was just a short connection to the school and decided to ride up to the building just to make sure. It kept going past the school and we were getting curious. Mystery trails are very intriguing, especially when you’re on top of a hill and you can see it disappearing into the fields down below like in this case. Just where was this headed? There was nothing around but farm fields and a deserted road. It’s the trail untraveled that keeps me up at night; sneaking its undulating fingers into my brain whispering “Don’t you wish you knew where I go?” I pleaded my case to Jen and talked her into following me down the rabbit hole even though we were on a schedule. The trail paralleled a road and after going through two deserted traffic circles, we came to a major traffic interchange at Highway 52. Again the trail continued, this time separated from lanes of traffic on both sides by concrete barriers. Our mystery trail finally ran out at the next roundabout. A quick check on Google showed we were just about two miles northwest of Oronoco. Mystery solved (?) A connection trail between the Douglas State Trail and Oronoco seems to be in the works.

This little detour added about five miles to our day, but we still had lots of time to check out the scenery on the Douglas Trail, of which there’s plenty. The trail spit us out at the trailhead in an industrial area on the northwestern edge of Rochester. All we had to do is cross the road and bike another mile on a bike trail to reach LTS Brewing. 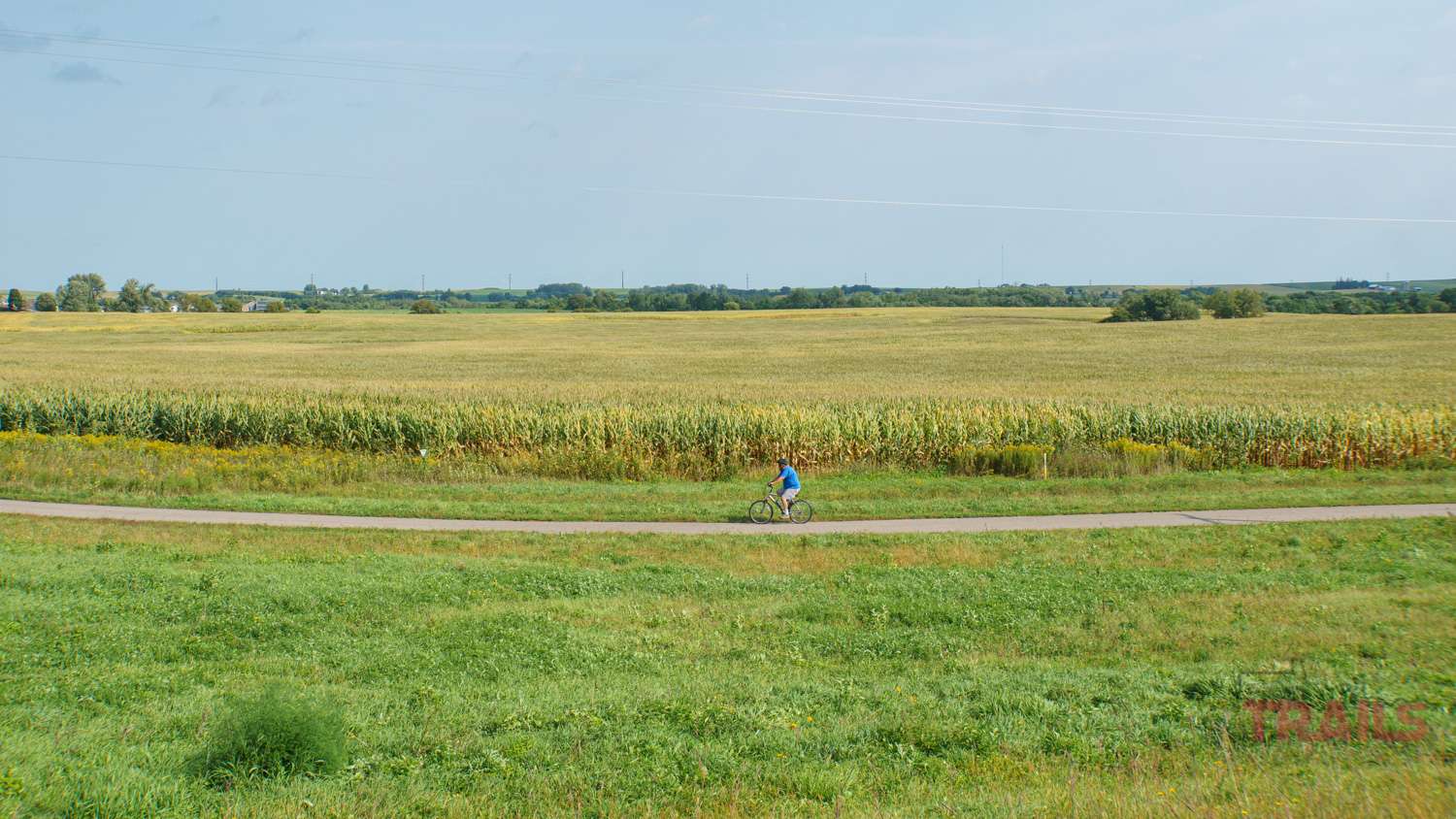 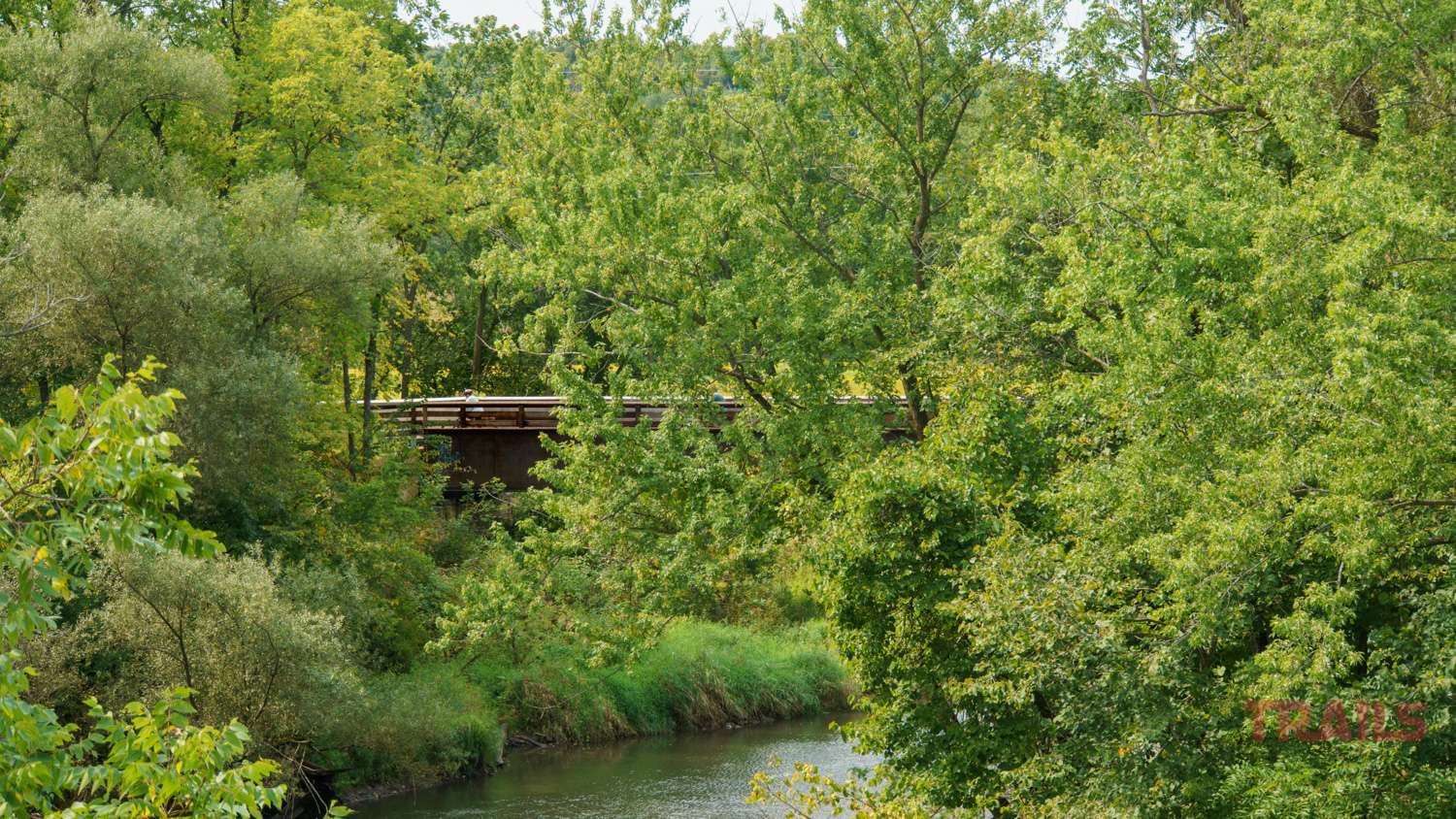 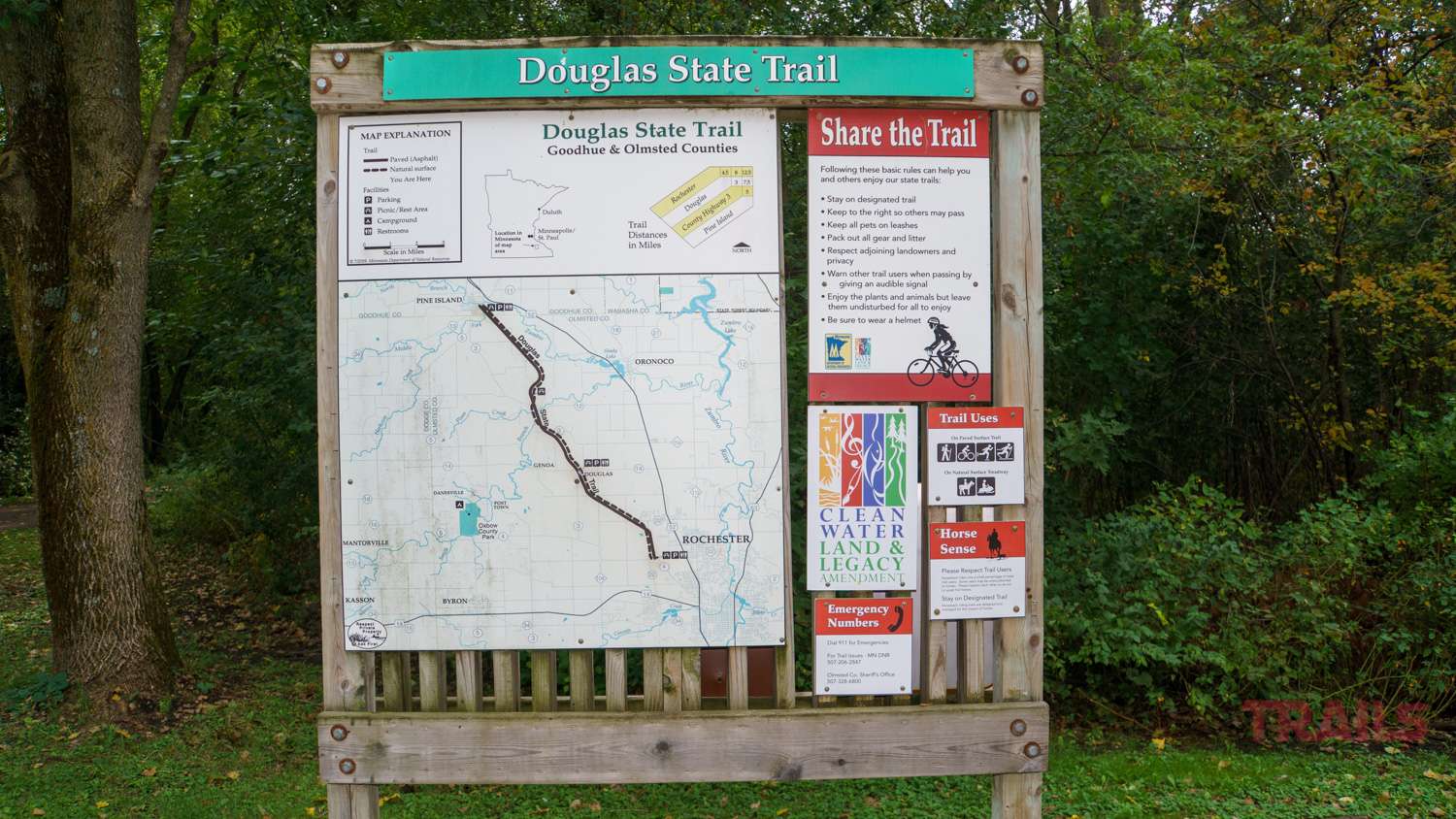 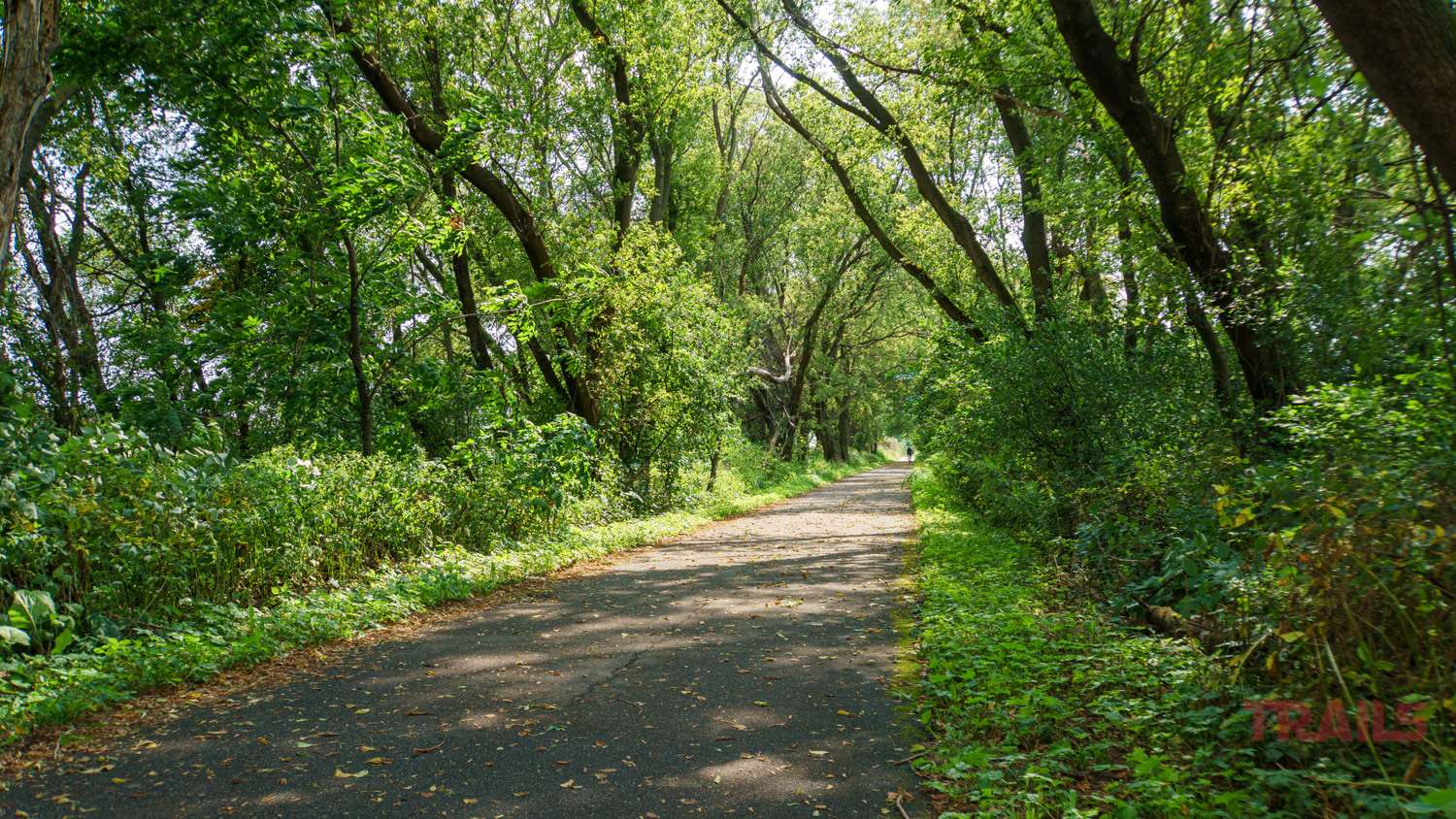 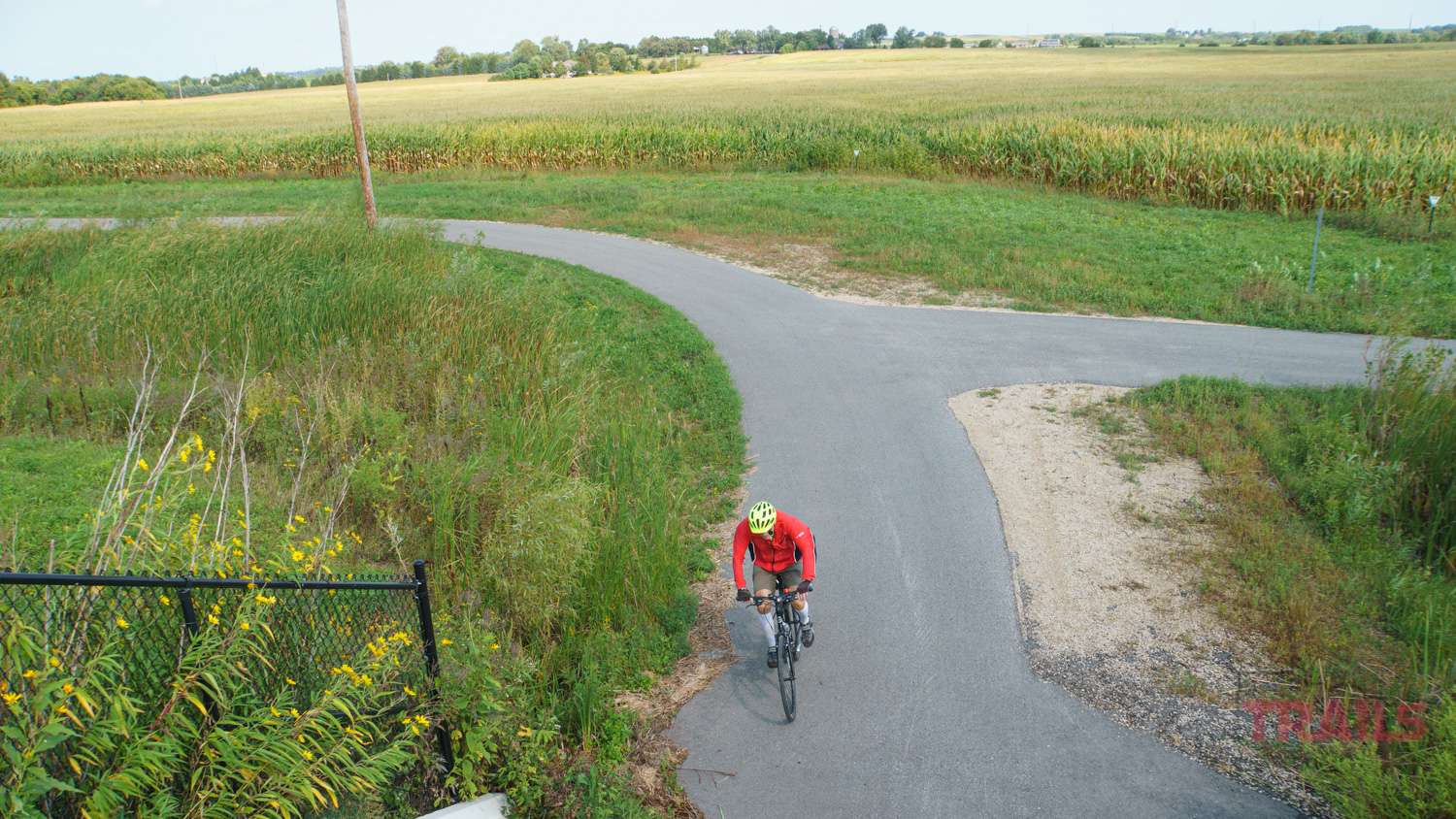 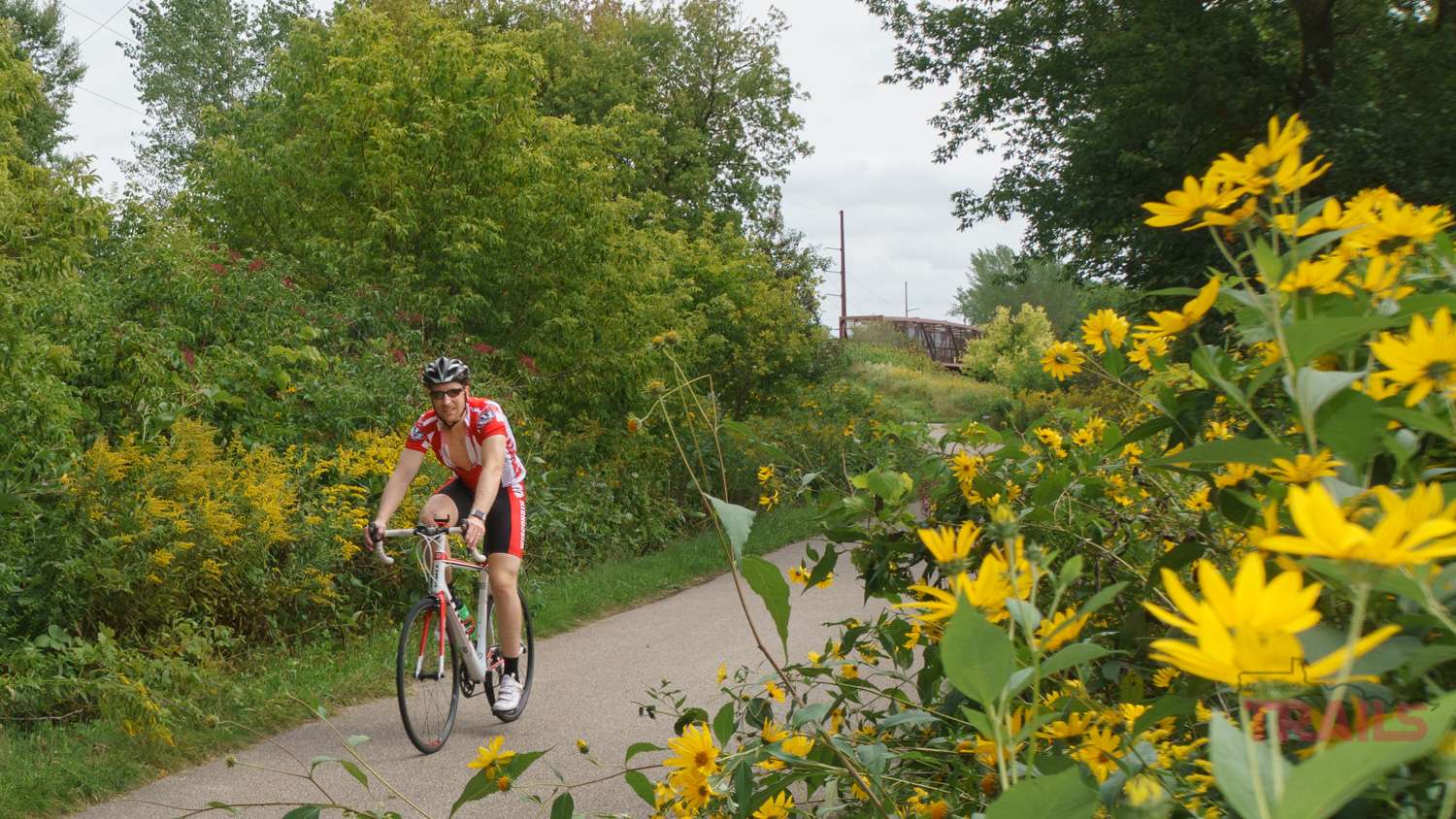 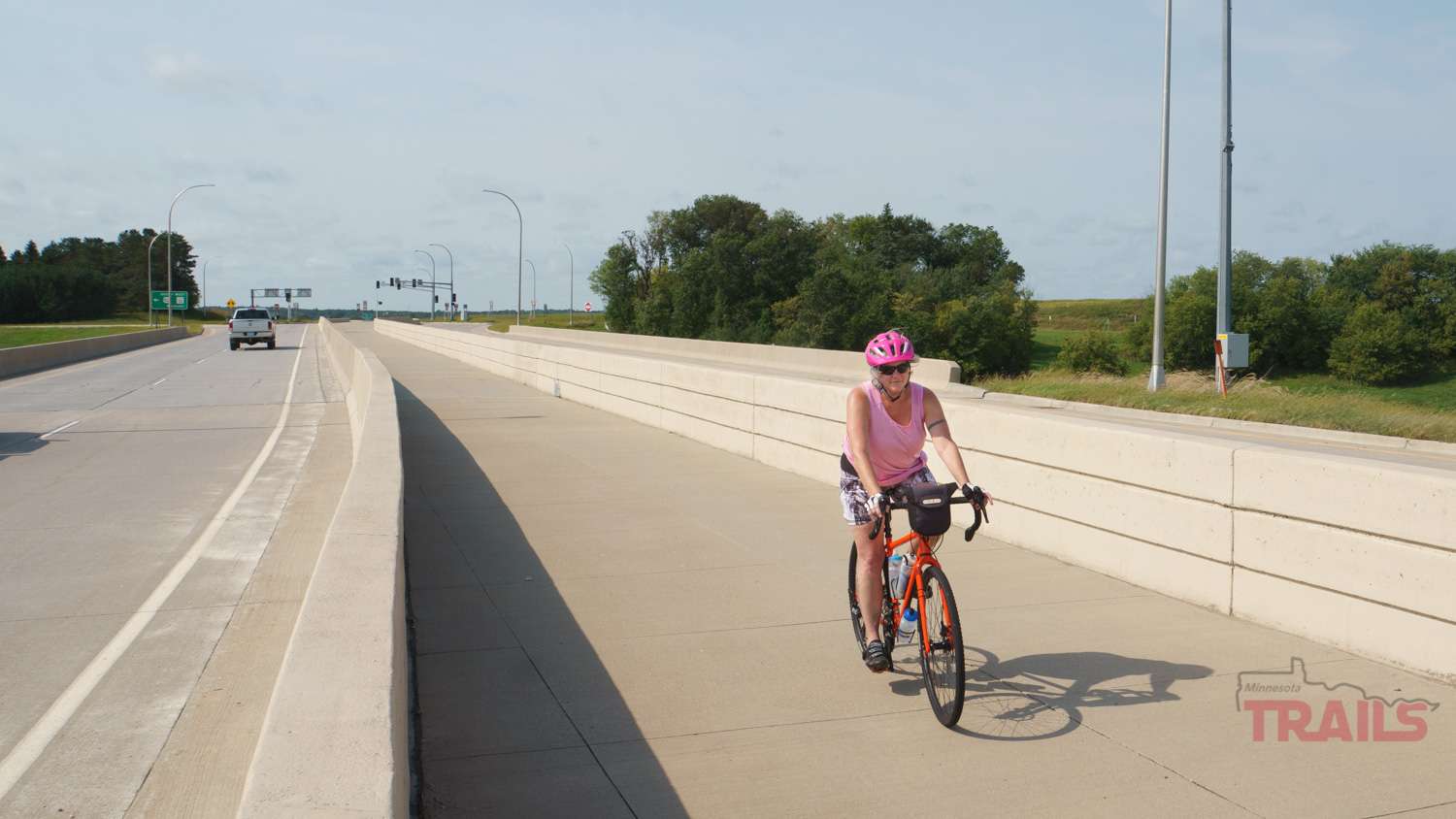 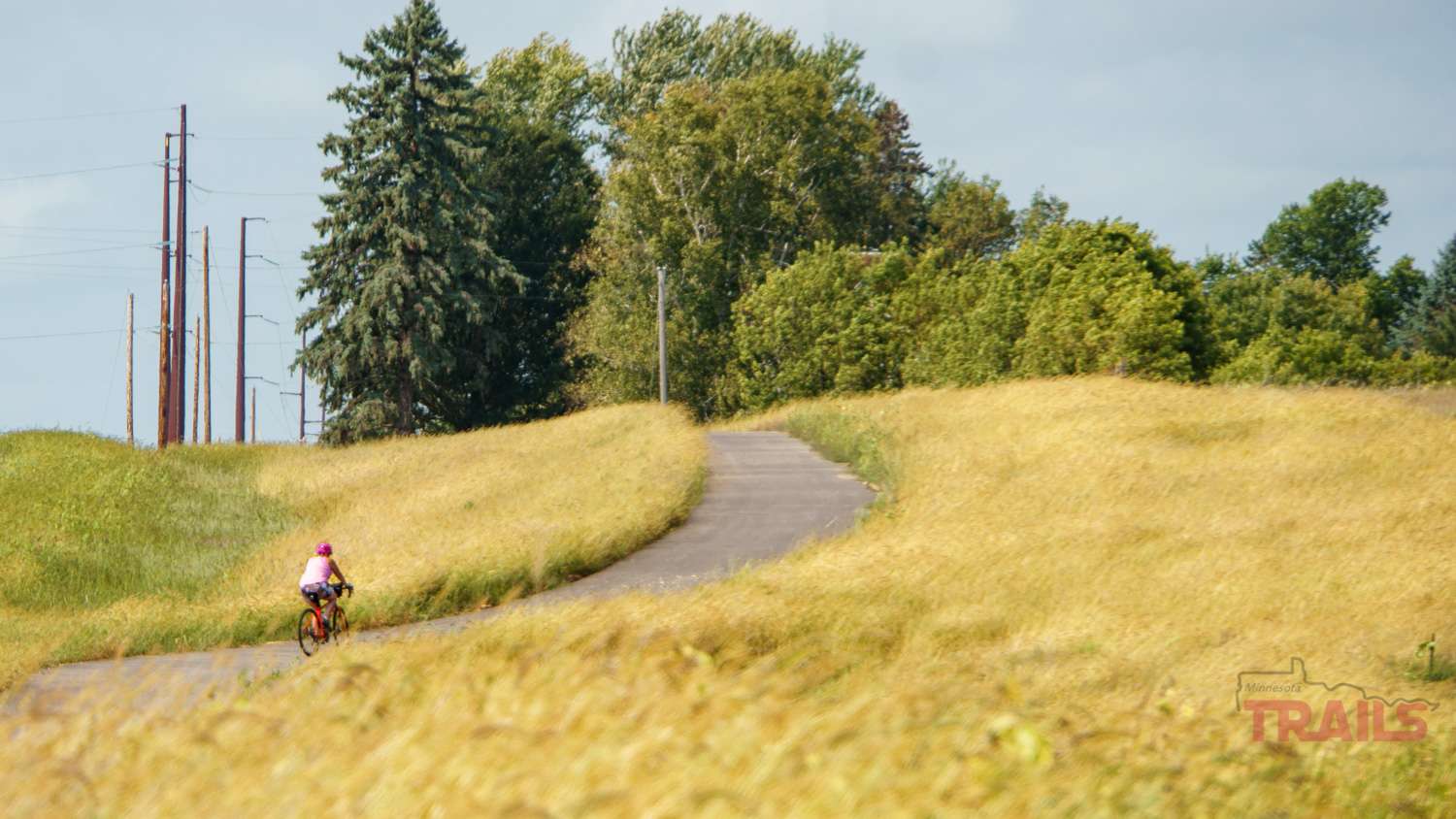 Brandon Schulz and co-owner Jeff Werning have been serving beer in their cozy taproom on the outskirts of Rochester since 2015. It’s tucked into an industrial building that used to be the shop and offices of an excavator company. Today the blue and yellow metal clad structure houses a different kind of machinery, an 8bbl steam fired brewing system. Drinking good beer, eating good food and spending quality time with friends are important to both Brandon and Jeff and they both enjoy trips to the Boundary Waters, camping and biking with their families. “I decided life was too short not to follow my dream of opening a brewery.” Brandon said. This motto, life’s too short, stuck and became the name of their business venture as the acronym LTS. The logo features a tent between pine trees, a nod to their love of the Outdoors. The day of our visit I counted at least 16 flavors on tap, including a fruited sour and an infusion made with Jolly Rancher candy.

While Brandon developed most of the brewery’s recipes, he says his “creative team” of brewers and staff are gifted in tasting and composing flavors. “We tend to bounce ideas around and come up with some pretty good stuff,” he said. Jen and I hit the patio and started exploring some of this good stuff. The sun was out, we were slightly salty from our bike ride and the patio was lovely, so the monumental task of tasting almost every flavor wasn’t much of a chore. When Jen announced that her second place pick was the Strawberry Wheat (ABV: 5.2%, IBU: 21) I wasn’t surprised. She said it really smelled like fresh strawberries and tasted even better. But I wasn’t ready at all for her overall winner, the Michelada. It combines the Biergarten Helles Lager (ABV: 4.8%, IBU: 20) with Clamato and spices, kinda like a low-alcohol Bloody Mary or, in this case, Bloody Ursula (or another German women’s name). It’s good to know you can still find out new things about your spouse after 25 years of marriage. My runner up was the Under The Maypole Maibock, which packs a punch at 8% ABV and only 27 IBU. It came in second because I couldn’t decide between it and another. In light of the impending season change my winner was the little brother of the Maibock, the Oktoberfest Lager. It had about the same IBU, but only 5.3% ABV. I was getting ready for fall. We eventually had to get back on the trail, destination Pine Island, where another brewery was waiting for us. 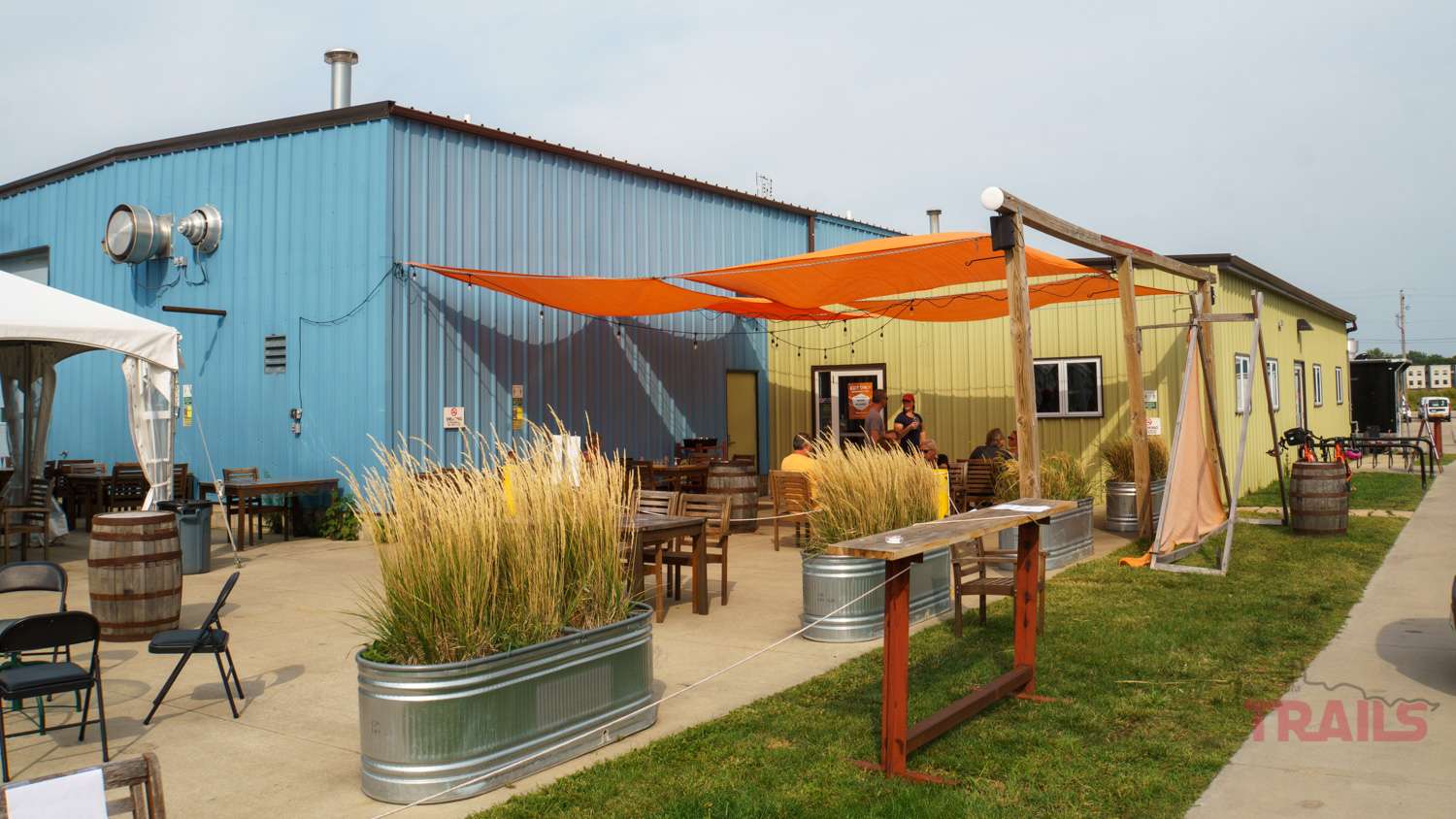 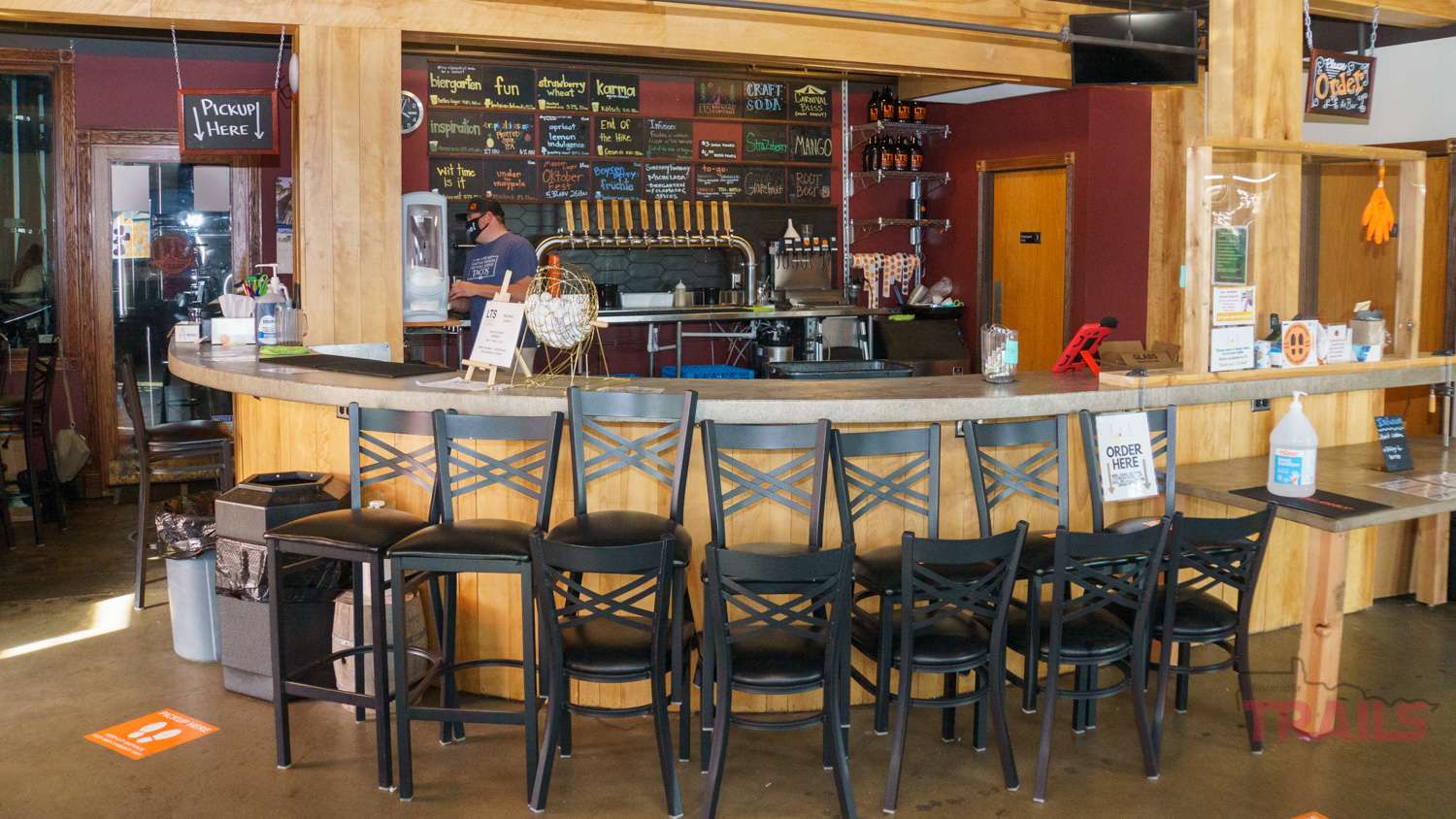 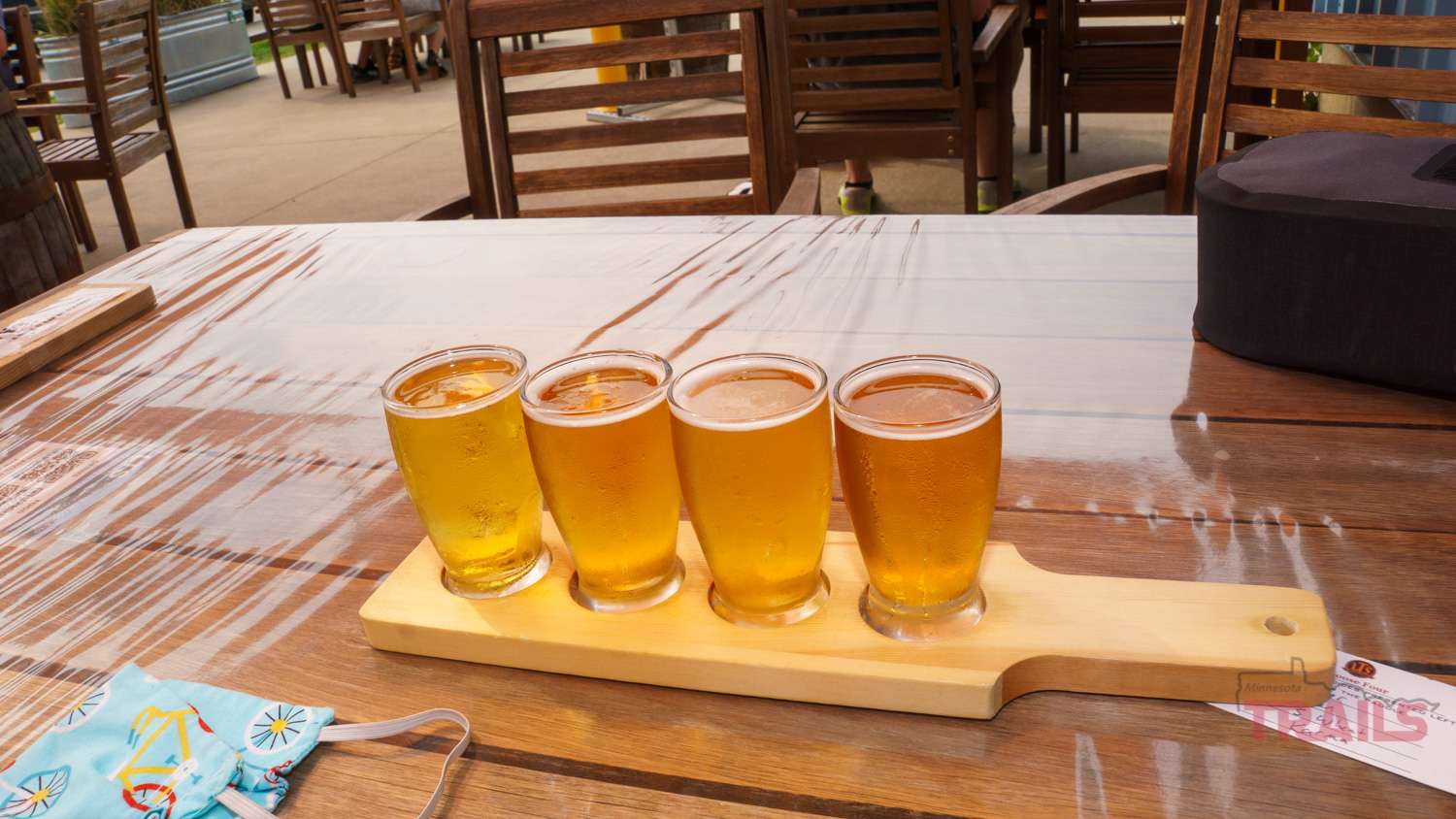 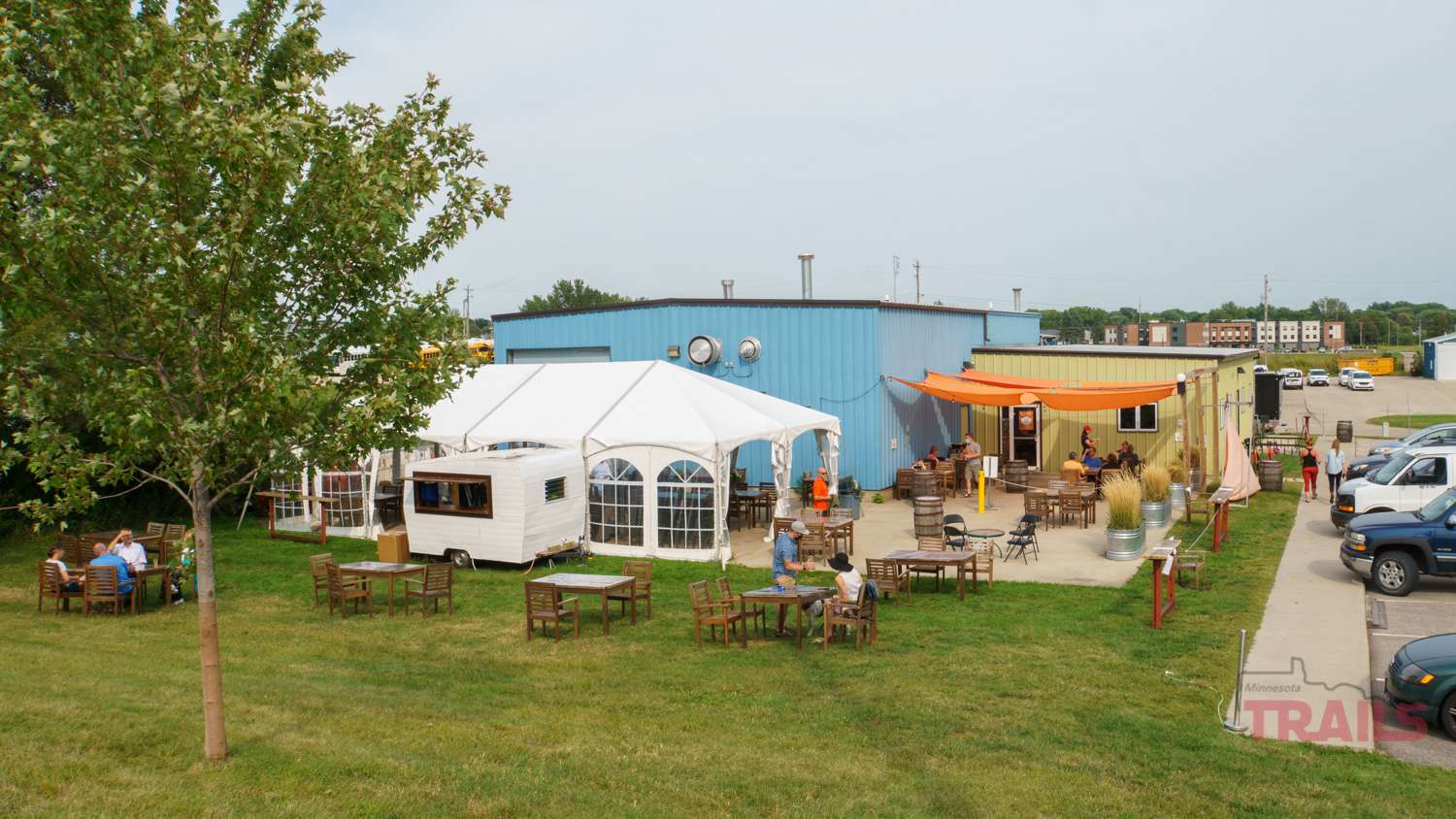 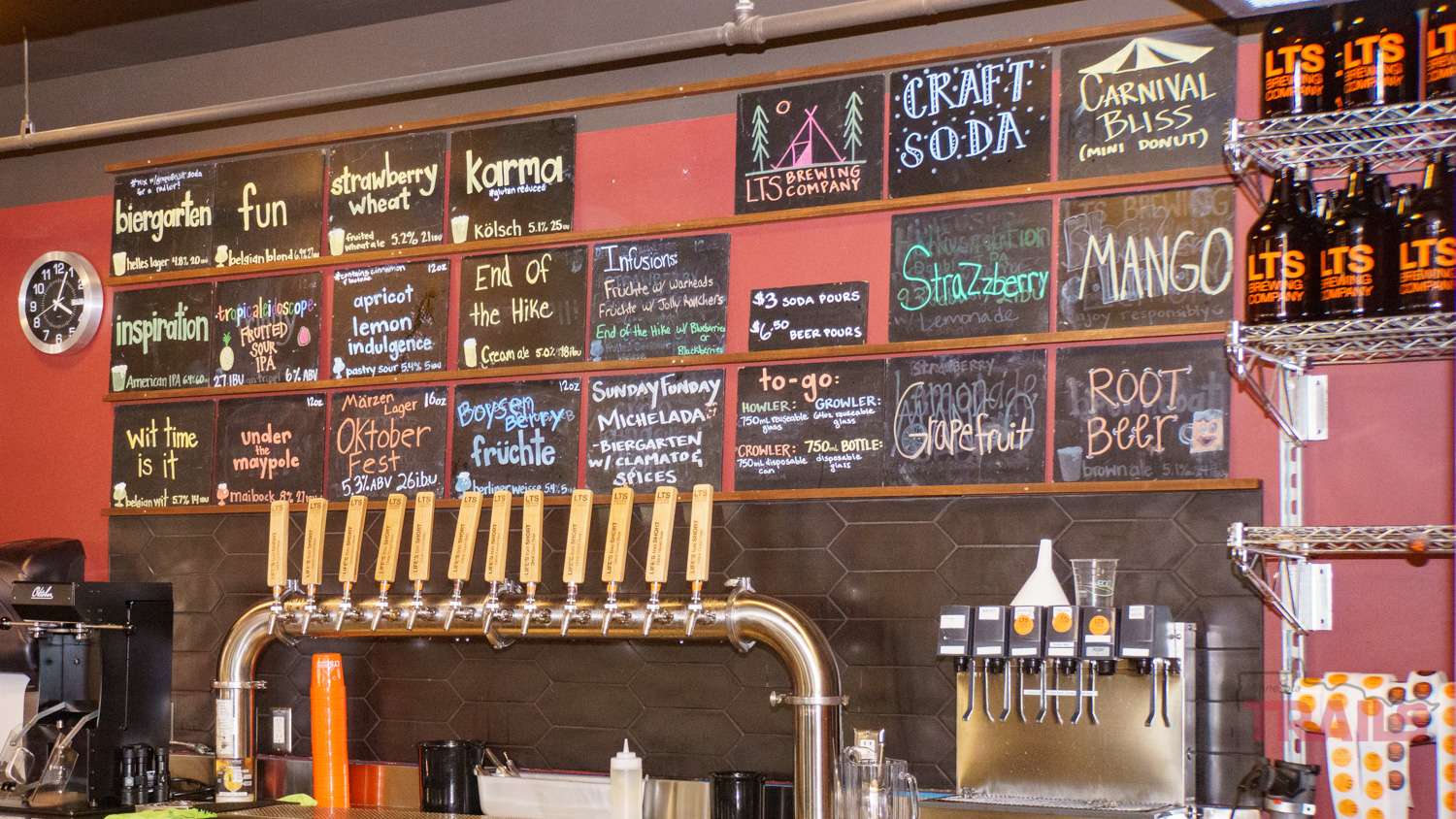 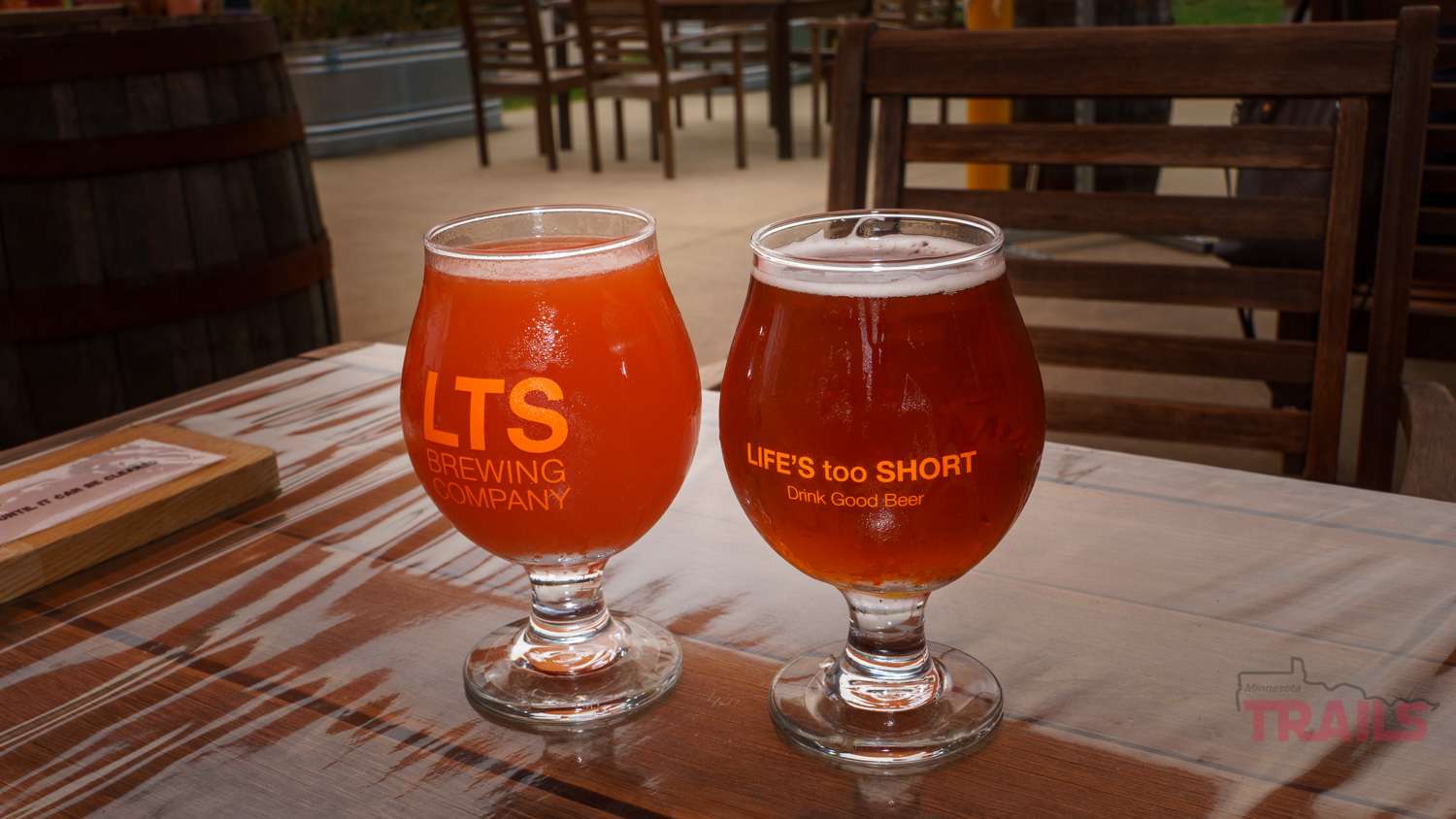 When we first made plans for a Trail Pairing visit to Pine Island, South By Southeast Brewing was supposed to open on Labor Day. But as with any brewery opening there are delays and when we came to Pine Island, opening day had been pushed back a week. Luckily, brewing had begun and we were able to get crowlers to take back to the campsite.

Business partners Ann Fahy-Gust and Tessa Leung have turned the 1960s era Pine Cheese Mart building on Highway 52 into a brewery and taproom, drawing on their experience in the brewing and restaurant industry. Ann is a master brewer whose résumé spans more than three decades and includes work for Coors and Guinness. She’s traveled the world building large-scale operations from the ground up. Tessa is a seasoned restaurant owner and businesswoman and a sommelier with an intense interest in flavors, be it wine, food or beer. The pair employs two brewers, Aaron Espy and Jason Pahl who currently produce about five styles on a 7bbl system with room for 650bbl of fermentation space. “Local reception has been exceptional.” Tessa said when stopped in to pick up our crowlers as they were putting the finishing touches on the taproom. “Pine Island was a welcoming community and we felt they really wanted us here. We are both small town ladies and so there was an instant connection.” Once open, their backyard will have a grill area where people can prepare their own food and they’ll be working with a local grocery store to sell grill packs. While COVID-19 has delayed the opening and any future plans are currently on ice, Tessa said they’re working on improving an existing walking trail between the Douglas trailhead and the brewery to allow people to ride in directly from the trail. We let them get back to work and hauled our cache of crowlers back to camp, via said walking trail.

Our home for the night was the municipal camping spot directly across the street from the trailhead. From our vantage point we had a fantastic view of the comings and goings at the trailhead, which always had something happening. While we stayed there, the shelter across the street was host to a food truck, a farmers market, a birthday party and an event involving a piñata. Who needs a TV while camping?

We tasted all beers except the Frontage Road Peanut Butter Stout. Neither one of us is a fan of PB in our beer and the can made a great gift for Jen’s dad. After some deliberation, Jen’s favorite became clear. While she thought the Easy A (5% ABV 14IBU) is a “great drinkin’ beer” on a hot day, the needle ultimately pointed to the Trailhead Amber (4.1% ABV, 16 IBU) because fall was in the air and the evening called for a long-sleeve t-shirt. Of all the Hazy IPAs I’ve tried, the Lazy Day Hazy IPA was one of the better ones. After learning that there’s no Citra hops in it, I gave it a try and liked the residual sweetness. My palate registered a mango flavor at the end, too. However, the winner was the Freedom Scotch Ale (7.2% ABV, 11 IBU), which made for a perfect cap on a day of bike riding. Although higher in alcohol, it wasn’t excessively sweet at the end. Another good fall beer.

We sat and watched the business at the trailhead and snacked on some fabulous Mettwurst from Pine Island Meat Market for the rest of the evening. A constant stream of bikers and walkers came and went. Even after the sun had set we could see the occasional headlamp bobbing along the trail in the dark. 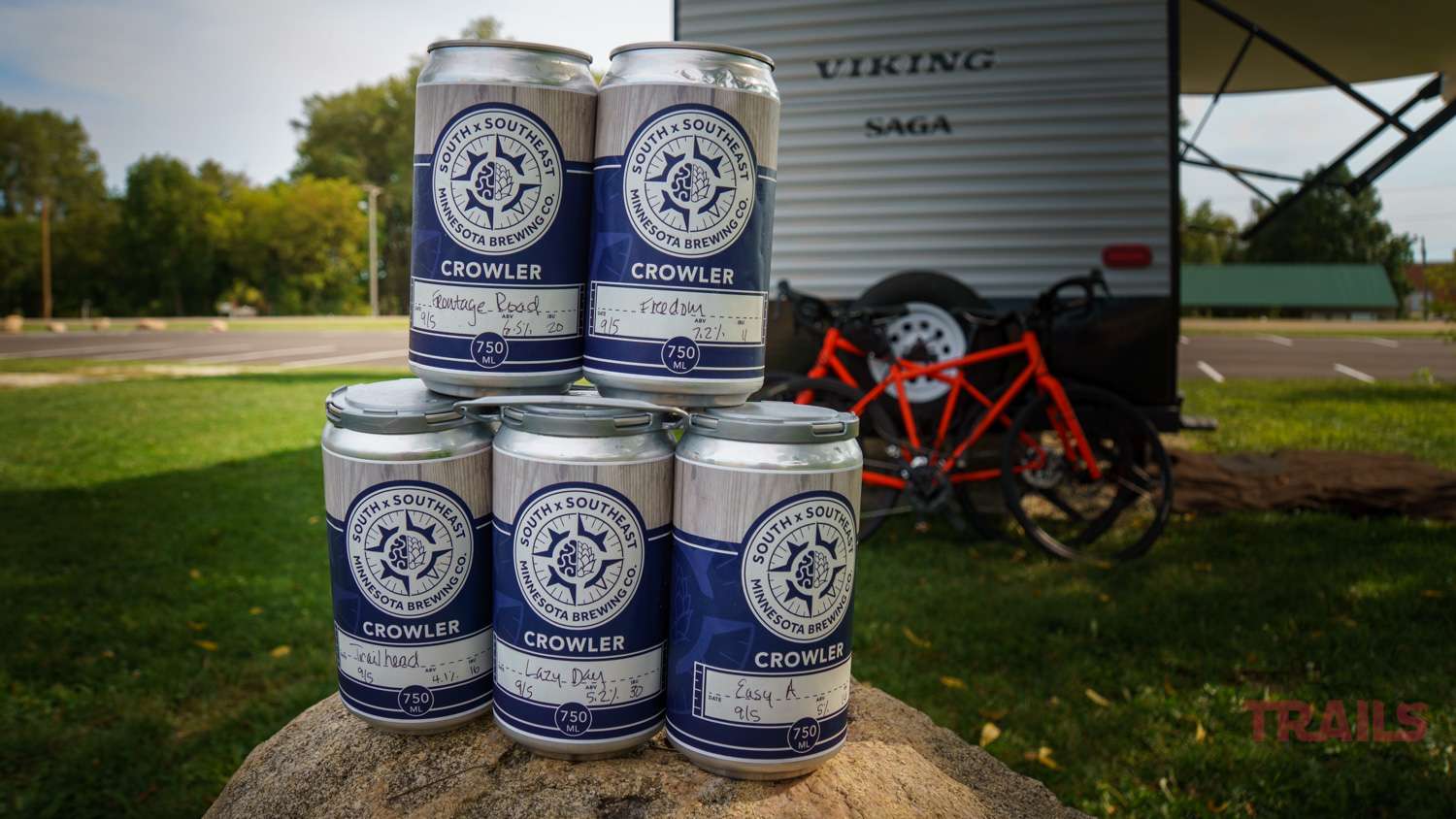 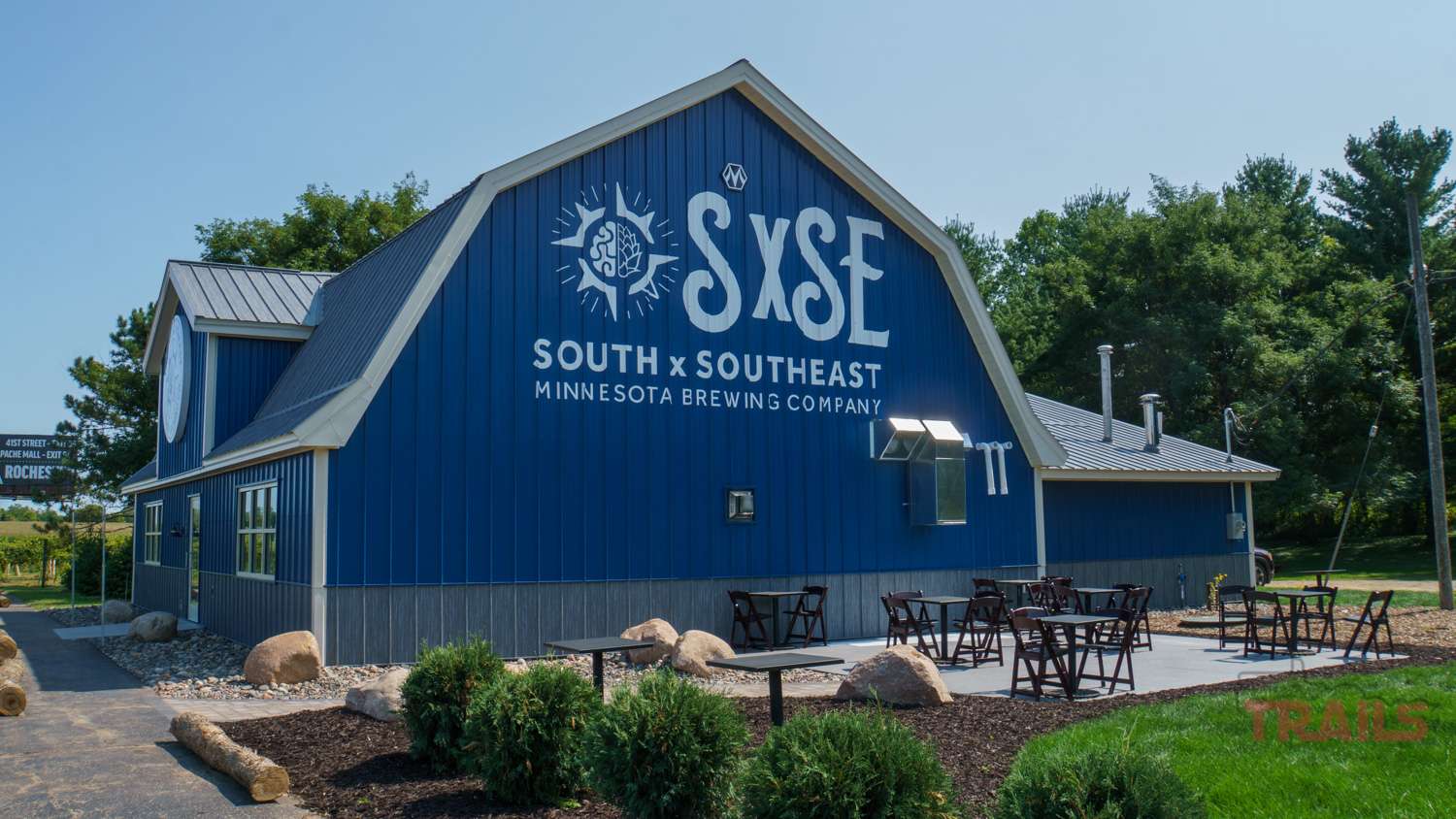 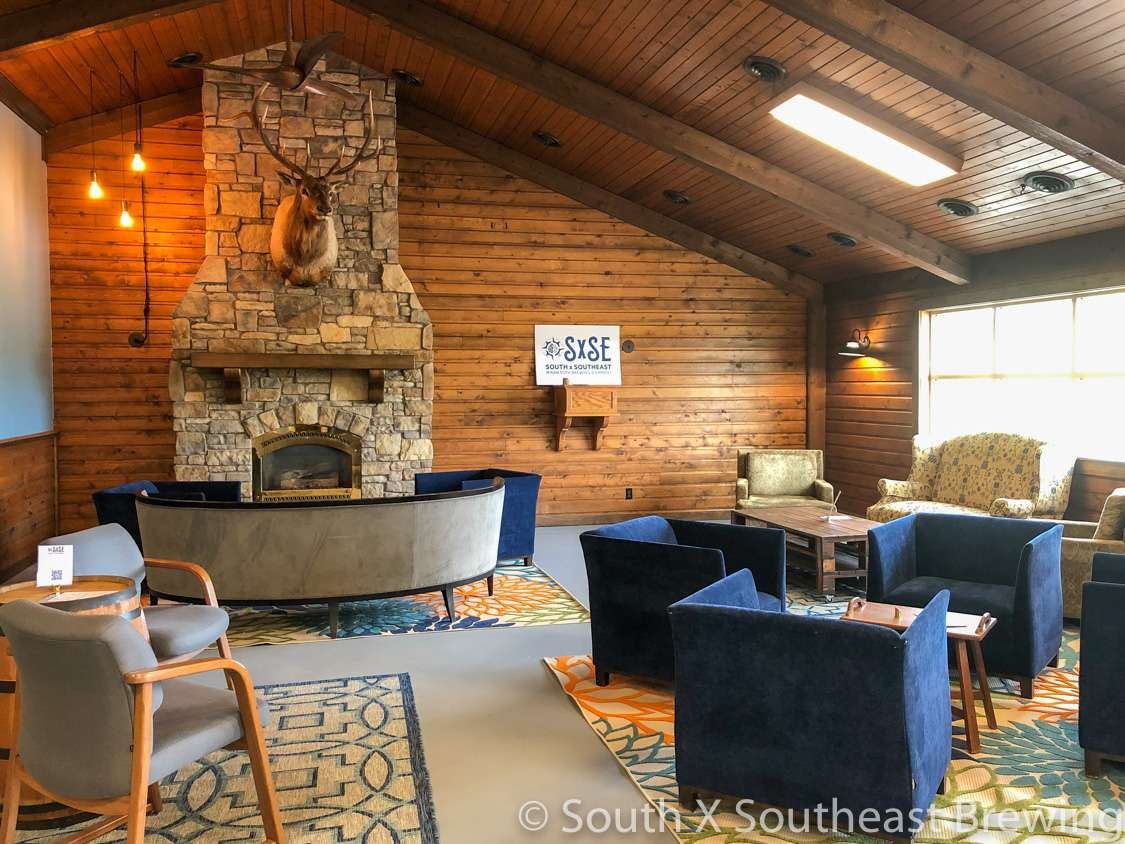 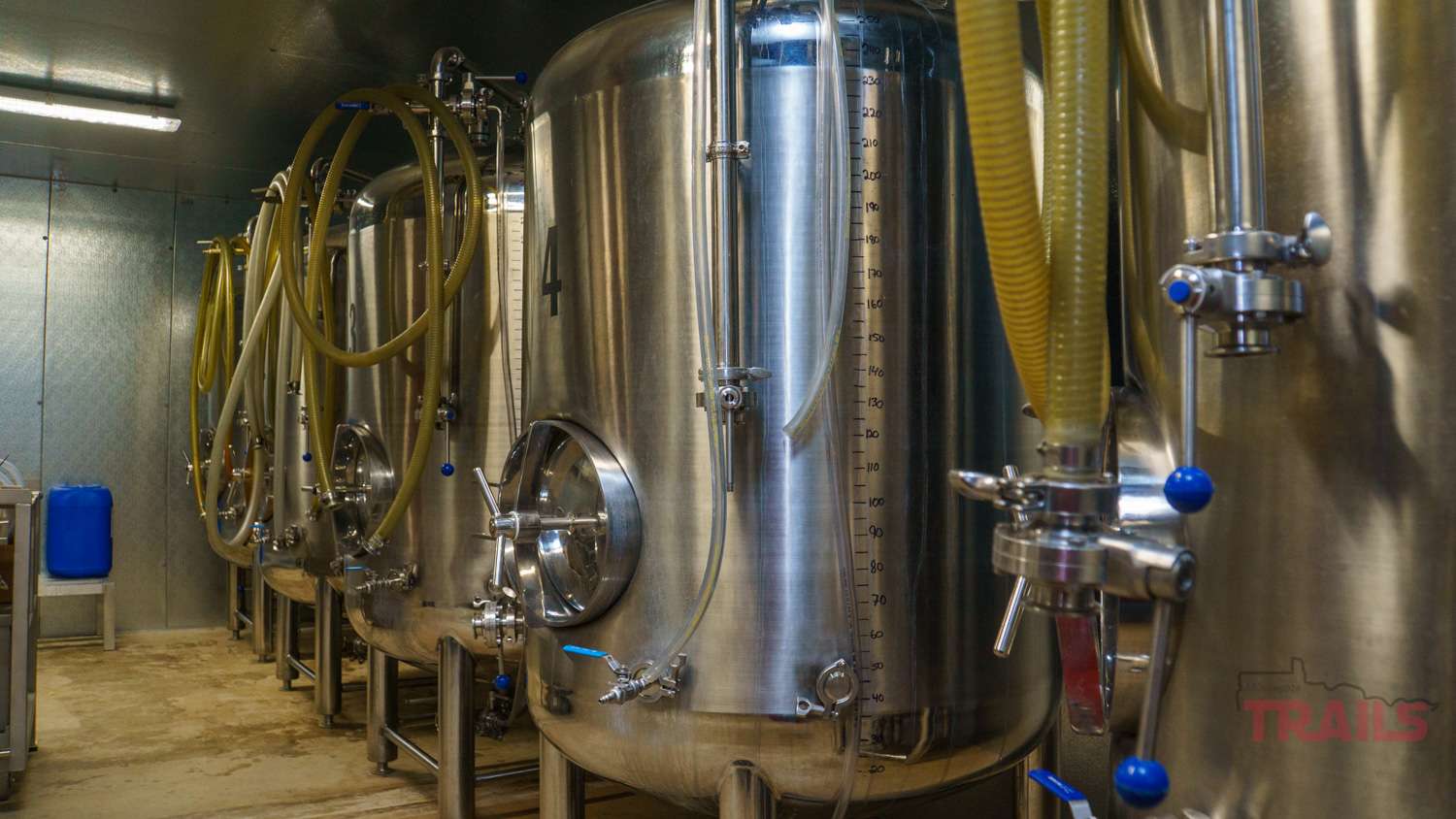 Like so many recreational trails in Minnesota, the Douglas State Trail is a small piece of a much larger puzzle. If you like to dream about future trail riding possibilities in Minnesota, read on. If not, skip this paragraph. Zooming out on the map, we see that there’s a lot of untapped potential for trail connections in southeastern Minnesota and a key connecting trail is as of yet almost non-existent. The Goodhue-Pioneer State Trail is supposed to connect Pine Island to Red Wing and thus to the Cannon Valley Trail with a 47-mile paved path, but as of yet only about nine miles exist-in two unconnected segments. The Cannon Valley Trail will connect to the Sakatah Singing Hills State Trail in Cannon Falls via the Mill Towns State Trail and provide a route all the way to Mankato and beyond. Going back south from Red Wing, the proposed Mississippi Blufflands State Trail will eventually reach Lake City. That’s all the trails I knew of until I came across this map of authorized versus developed State Trails in Minnesota from the MNDNRs 2016 Mississippi Blufflands State Trail Master Plan and I’ll just let you look at it without further comment. 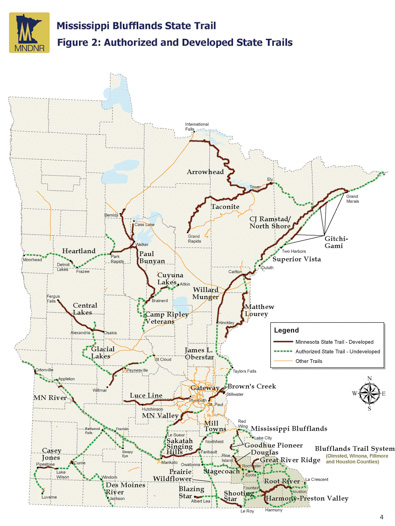 Fall Fun Walks with the NSTT

The NorthStar Trail Travelers (NSTT) are heading north in September, and you’re invited.

Where the Heck is Breadloaf Ridge?

During peak fall color season on Minnesota’s North Shore, it’s good to have some alternatives to busy hiking trails.

Visit these central Minnesota state parks for a weekend of non-competitive walking for all ages.