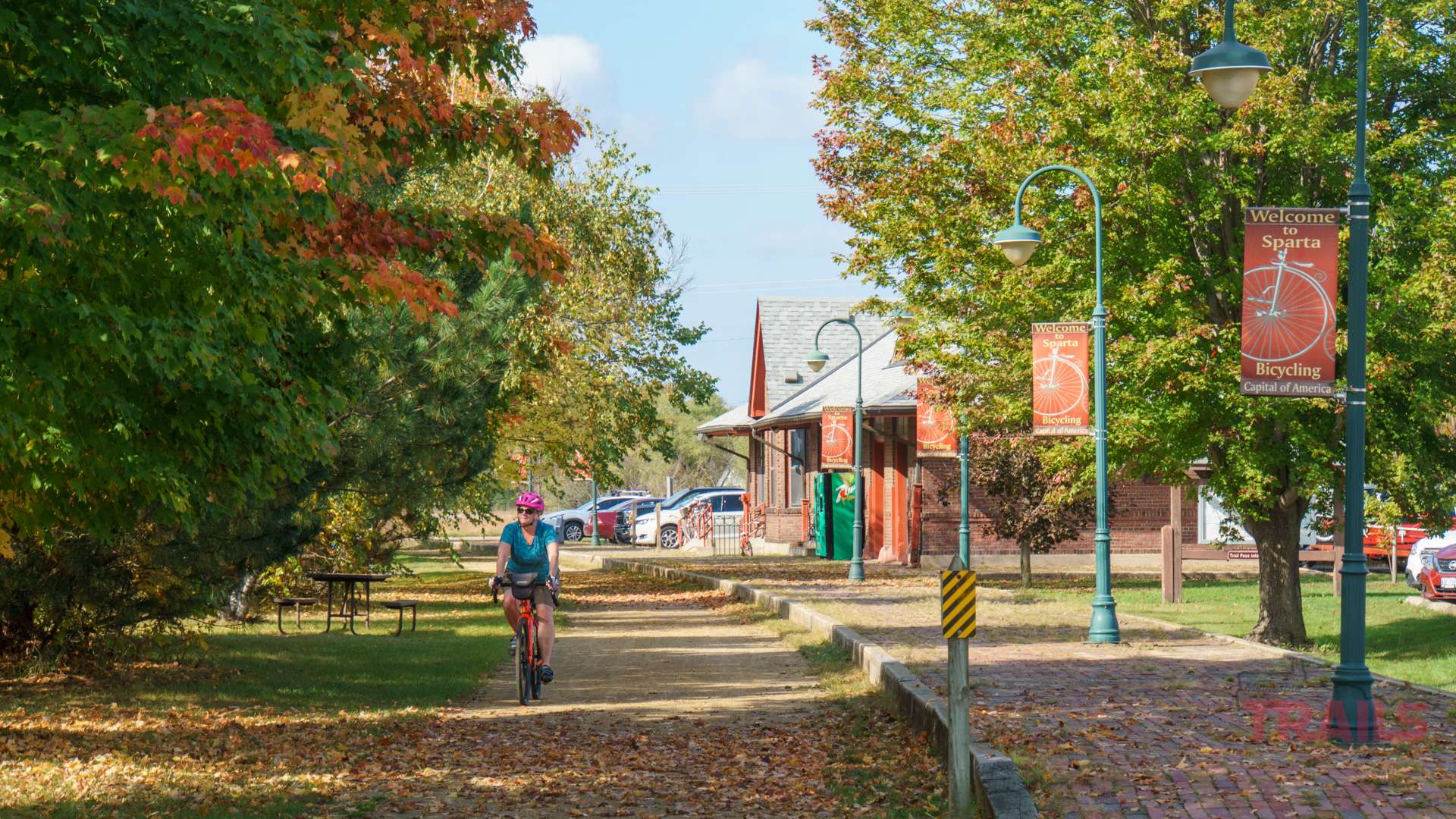 The last time I visited Sparta was in 2015. Our local bike group, the Central Minnesota Bicycle Club, invaded the Elroy-Sparta Trail for a few days, roaming the bluffy countryside and having a good time. It’s always been on my list of re-visits, because there’s much more to explore than the 32-mile Hall of Fame trail itself. It connects to several others, bringing the total to right around 100 miles, but that’s not all. When Jen and I found out about the Trails to Trout fishing tournament, which combines, you guessed it, fishing and biking, we went for it. 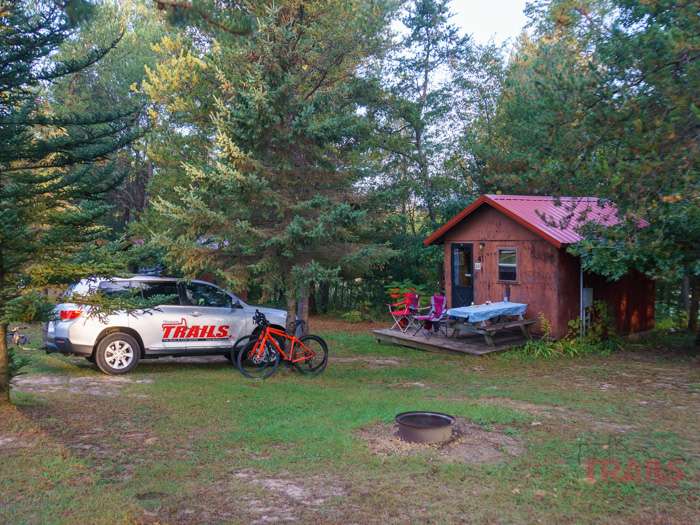 After some scouting we decided on the Leon Valley Campground as a home base, because it was within biking distance of Sparta. Unfortunately, the Trails mobile office stayed behind. Because of our tight schedules that week, we didn’t think we’d get to Sparta before 9 pm the day before the tournament opened, so we rented one of the little cabins they had available for the weekend. Getting there and moving in took care of our Friday night and we went to bed early.

As we sipped our coffee on our little porch and the sun started rising, we realized just how big the campground was. The cabins were tucked into one corner of the sprawling compound, surrounded by wooded hills that were showing signs of the first fall colors. 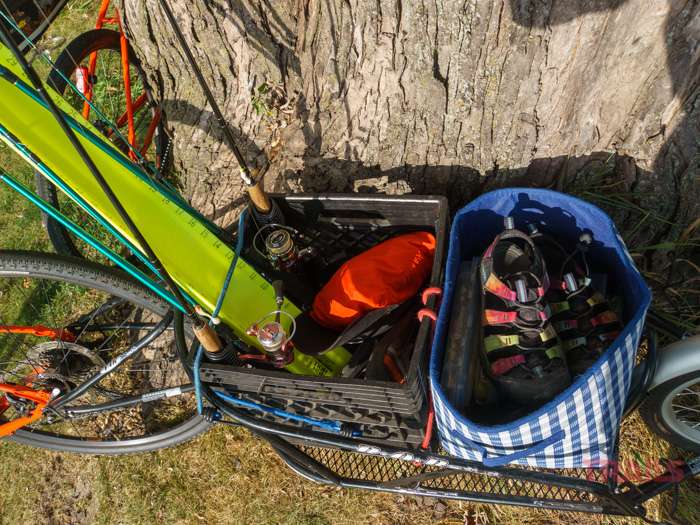 We hitched up the BOB trailer with our fishing gear (and my homemade Rod-A-Rest 2000 XLT+ modification) and headed for the hills, literally. It was a spicy, hilly four-mile ride through some very beautiful scenery. The reward for so much work early in the morning was a breathtaking view of Sparta on top of that last hill, just before a blistering 30-mile-an-hour descent. 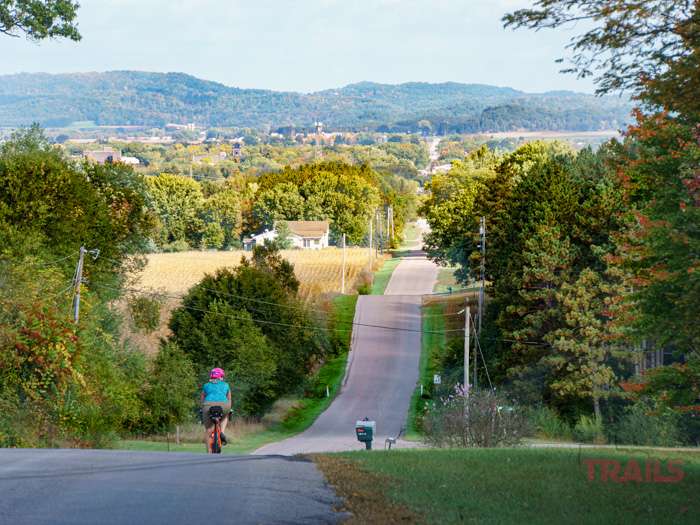 The road takes you right to the historic depot, which serves as a rest stop and houses the Chamber of Commerce office. We bought our trail passes and set off.
The fishing tournament has you fish for trout in streams inside of a 5-mile radius of downtown Sparta and record any fish you catch via the Fish Donkey app on your phone. According to our map, there were several spots along the Elroy-Sparta Trail we could access by bike. I’ll fast forward here and let you know that we didn’t catch a thing, but that has nothing to do with the creeks or the fish. According to the app’s leaderboard, other participants were adding fish to their digital livewells, so it was, once again, just us. 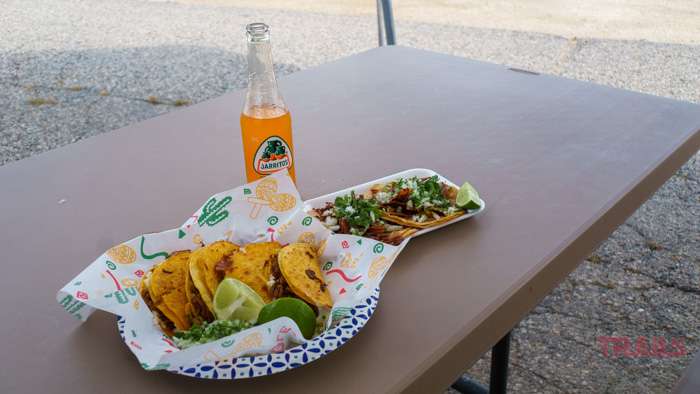 We didn’t feel like losers, because we did get in a great ride through the beautiful countryside on the trail and had a spontaneous lunch at the El Ray De Los Tacos food truck near Ben Bikin’ Park.
Jen also got some good advice from Mr. Bikin’ himself, whose mustachioed likeness and/or, penny-farthing bike appear on buildings and signs everywhere around town. 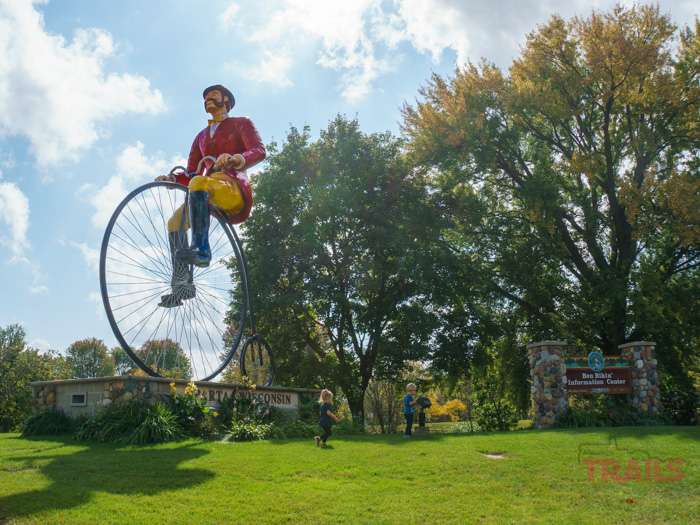 On the way back we discovered that the spicy hills didn’t get any tamer going the other way, especially after biking around town and the trail all day on an unseasonably warm fall day. We also ran into Bad Brad, who we figure was once good friends with Ben Bikin’, but the two split ways when Brad fell in with a rough crowd. While Ben chose the penny farthing way and sported a stylish handlebar moustache and bowler, Brad grew a full beard, bought a motorcycle and let his unruly mop blow in the breeze. The two haven’t spoken since. We might also have been delirious. 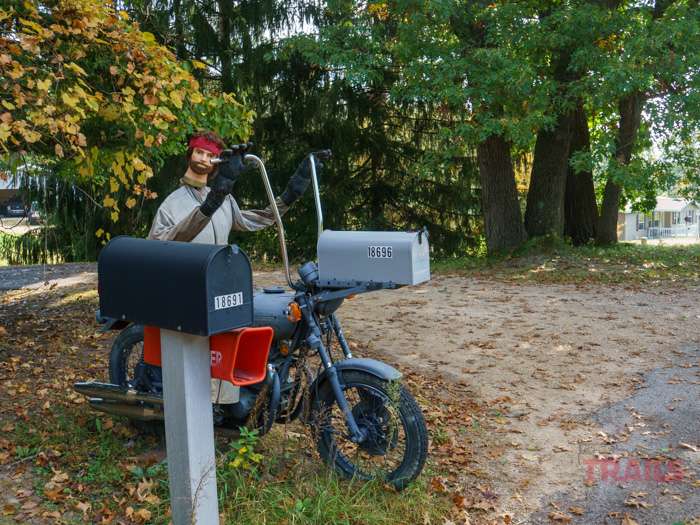 Before cleaning up and settling in at camp, there was one more stop to make.
It’s easy to miss the hamlet of Leon on your way from Sparta to the campground and it’s even easier to miss Alchemy Brewing Company in an unassuming cul-de sac, even though the town only has four streets, not counting HWY 27, the main drag.

But if you look closely at what appears to a garage you’ll see the sign. When we got there we didn’t need to look for long, because there was a crowd and people were milling around the driveway and hanging out in the lounge.

At first I thought I was standing in the smallest brewery I had ever been in, but owner Matt Schaitel assured me that Karst Brewing in Fountain, MN was smaller when they first opened. The IPA was very good, but unfortunately for us, they had had a record-breaking day and were out of all but two varieties. This place will have to be revisited. 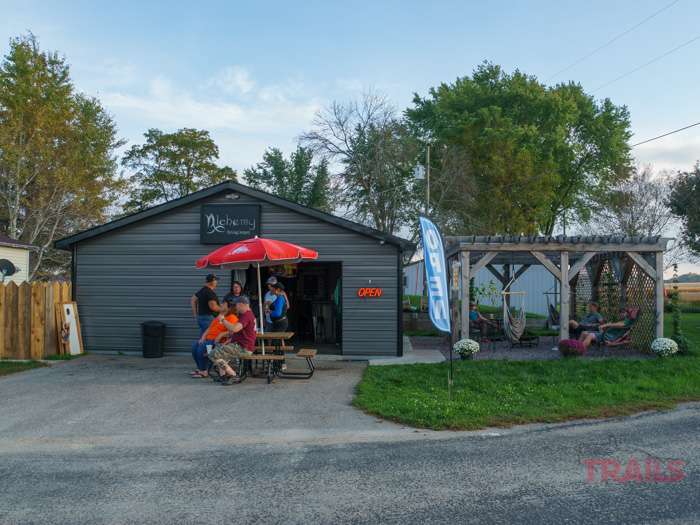 Before we left, Matt shared some local trout fishing secrets with us and, armed with this knowledge, we felt hopeful for fishing success on Sunday. I’ll again fast forward here and tell you we did again not catch anything, but we got to see more of the beautiful country surrounding Sparta. 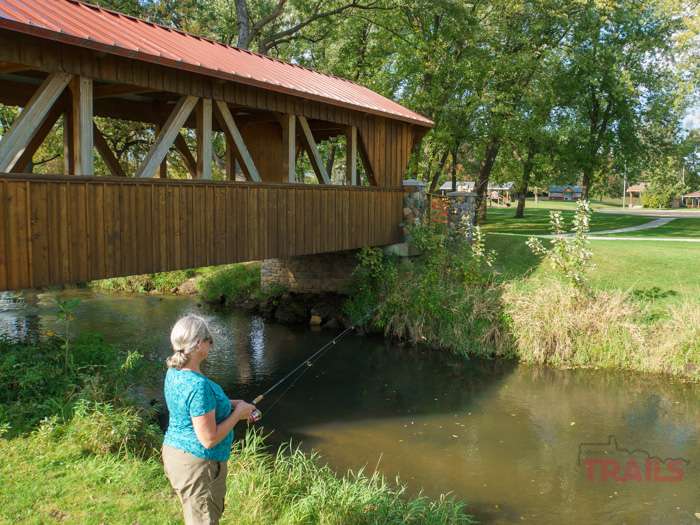 In the early afternoon we turned our wheels toward home and started the trip back, thinking we’re going to have to come back with a little bit more time to explore. There’s so much more to see than we had time for, like the Deke Slayton Memorial Bike and Space Museum. NASA Astronaut Deke Slayton, you see, was born in Leon, WI. Leon, WI has a brewery, and Sparta, WI is at the heart of a 100-mile trail system. If that’s not foreshadowing, I don’t know what is.

October Fun Walk with the NSTT

Join the North Star Trail Travelers on a fun walk at Afton State Park this October.

Life is Good on the Root

This photo essay takes you on a trip into southern Minnesota’s Bluff Country.

Take the road less traveled and get a glimpse of what Minnesota’s woods were like before the settlers arrived.