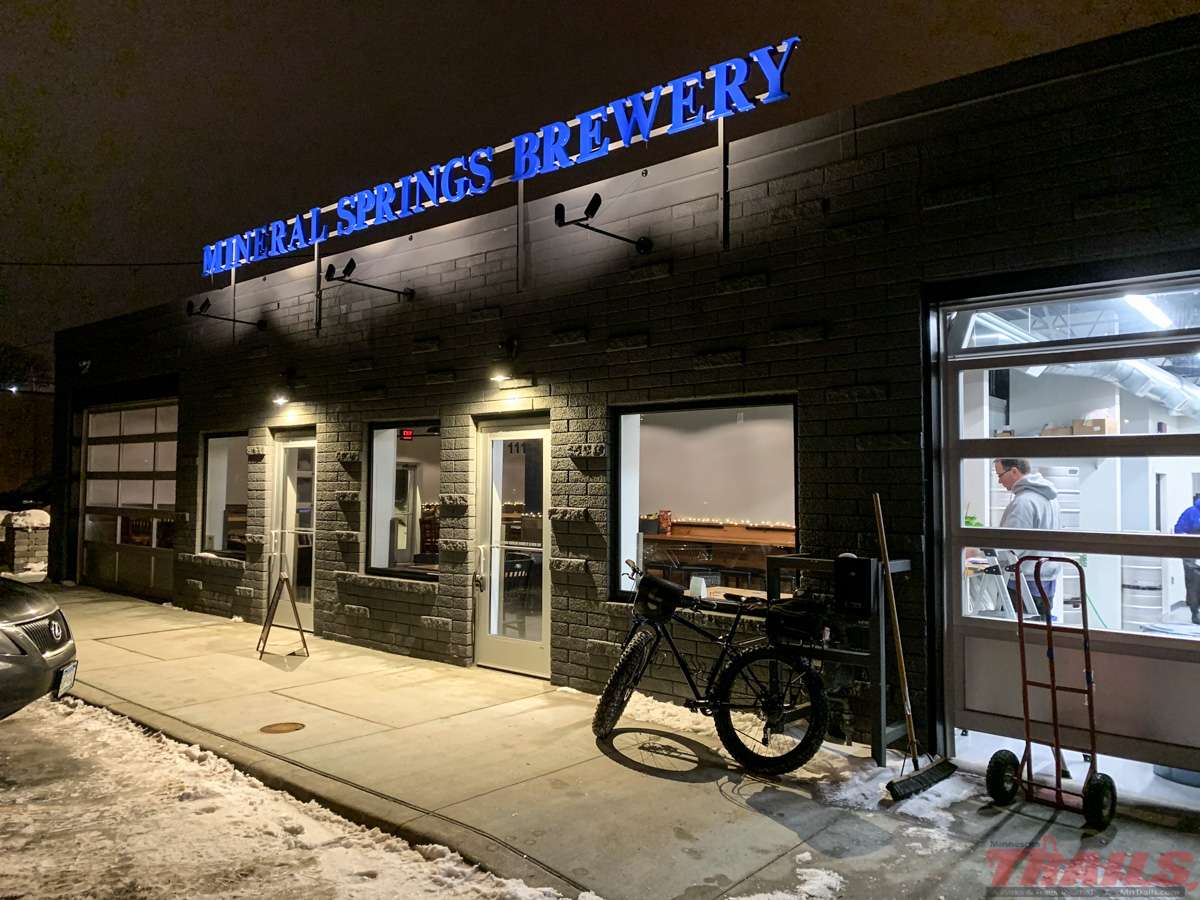 On a recent trip to Owatonna, I was lucky enough to be part of a private tour of the newly opened Mineral Springs Brewery and pair a pint with a visit to the fat bike trails at Kaplan’s Woods Park.

This city park just south of town is tucked into a corner between the intersection of 35W and Highway 14 and is frequently visited by locals who come here to bike, walk and ski. There’s a little history to this park that makes it kind of special.

In 1935, the state of Minnesota purchased a 180-acre, wooded lot from the Kaplan family and dedicated it as a state park. Not a lot of development happened during the next 30 years, though the state did put in some trails. In 1963, the property finally went into the care of the city and joined a very select group of Minnesota state parks that were un-designated, so to speak.

In 1987, the city of Owatonna established 225-acre Kaplan’s Woods Park with financial help from the Owatonna Foundation and the late Reuben A. Kaplan.

Today, there are six miles of hiking and ski trail and two miles of paved trail open to the public. The Owatonna Trails Association maintains six miles of mountain bike trail and grooms for fat bikes in the winter. 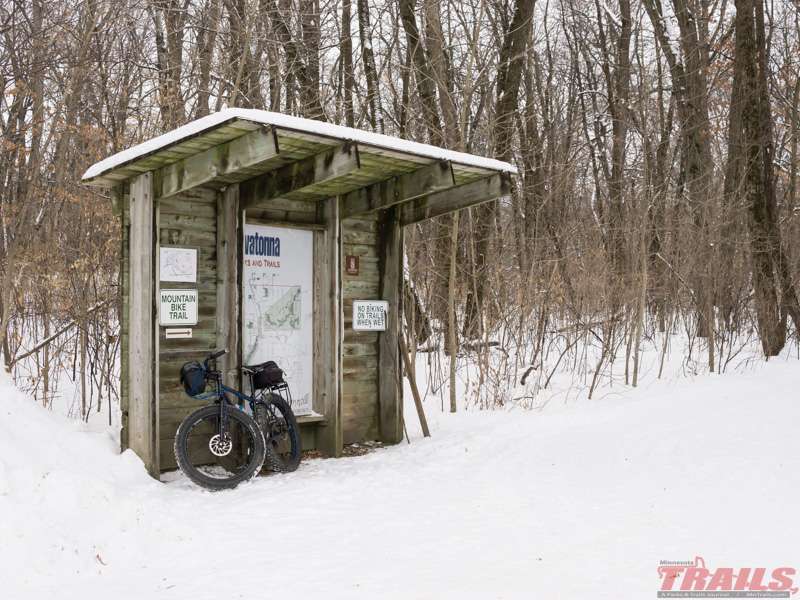 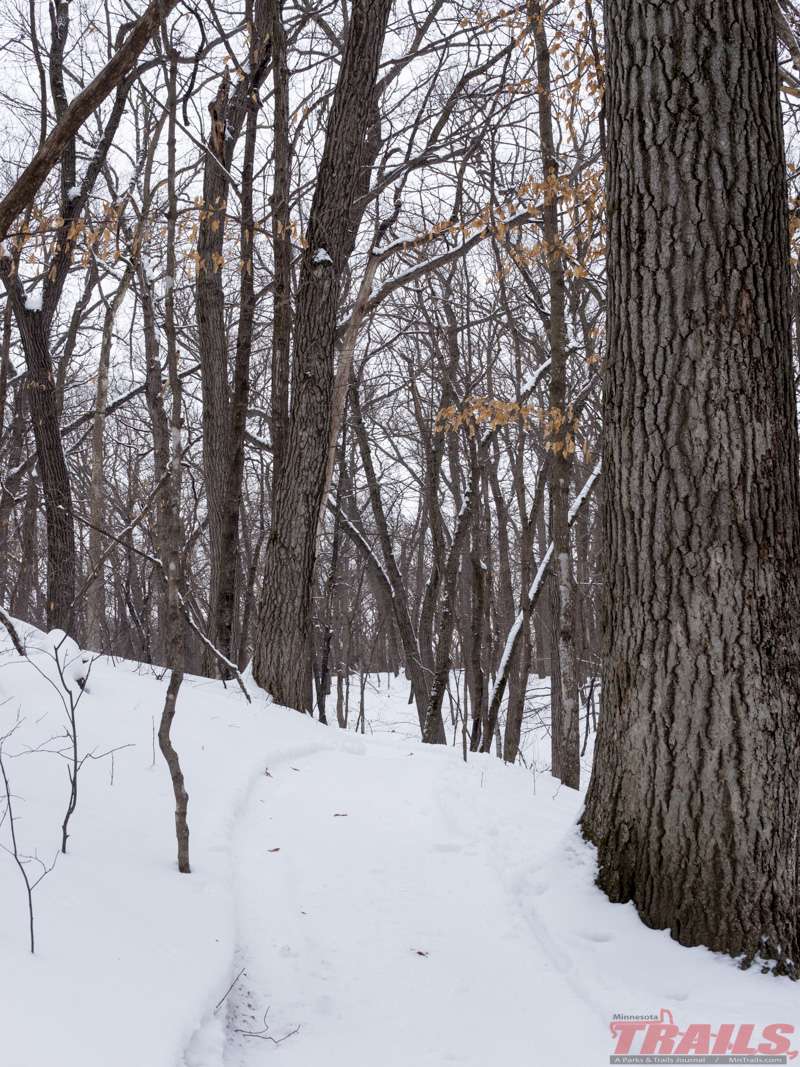 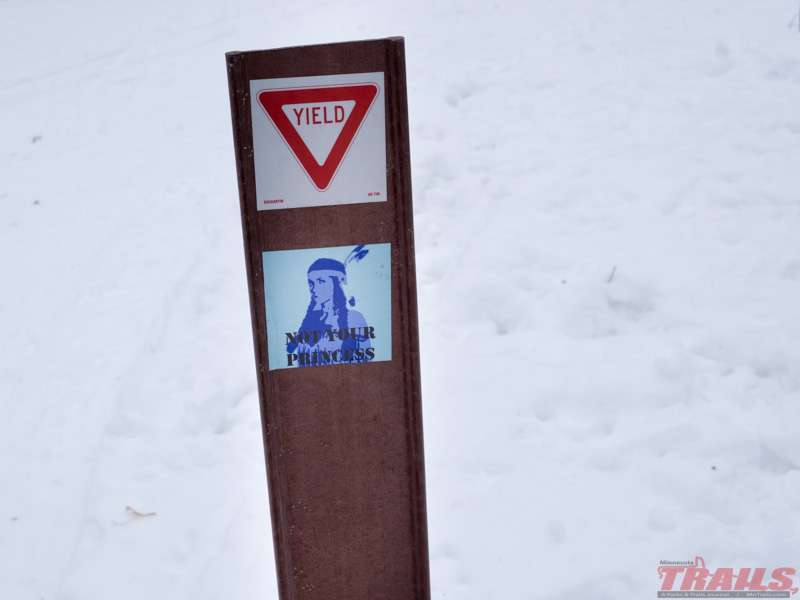 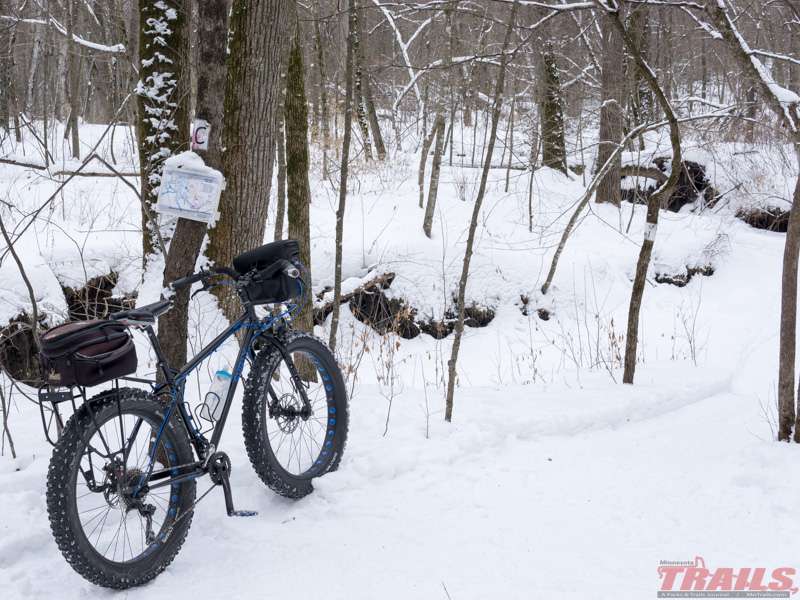 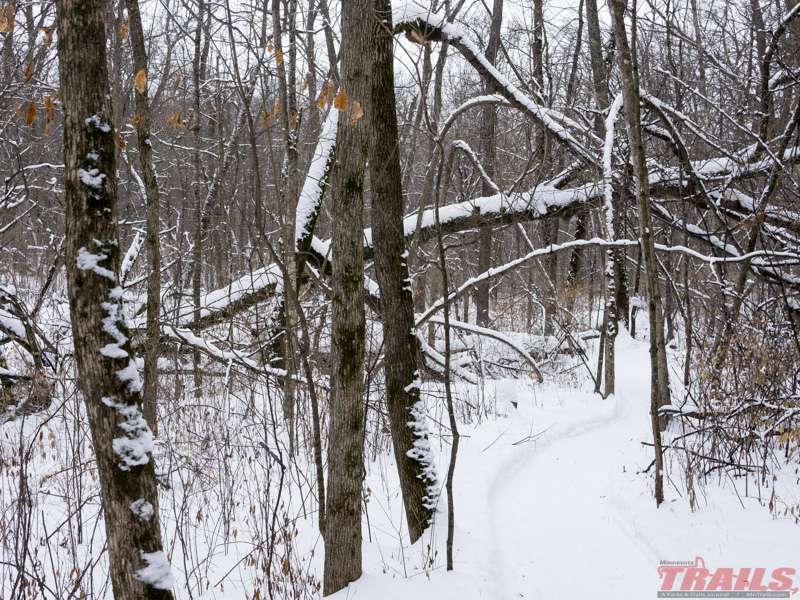 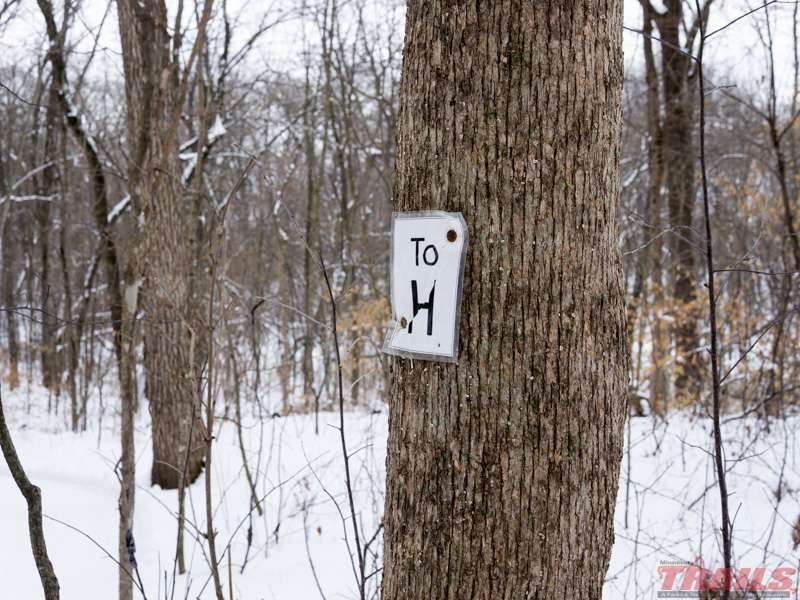 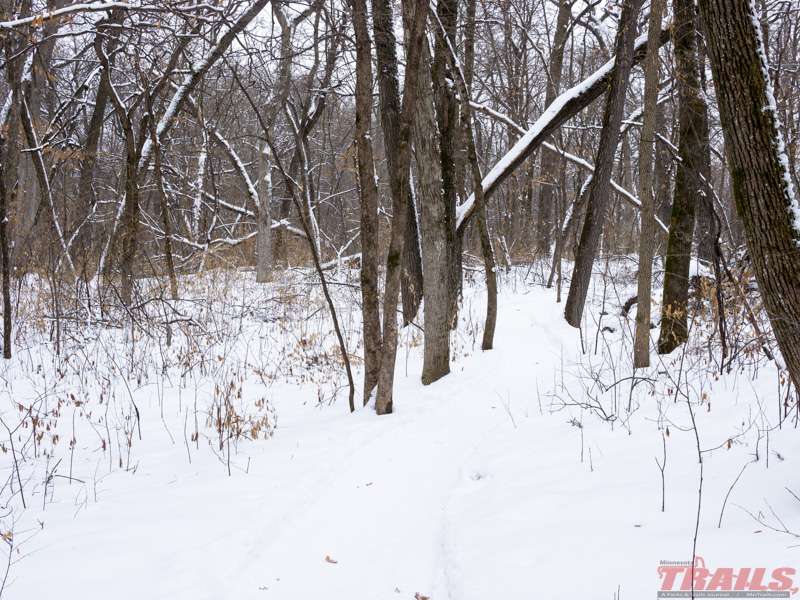 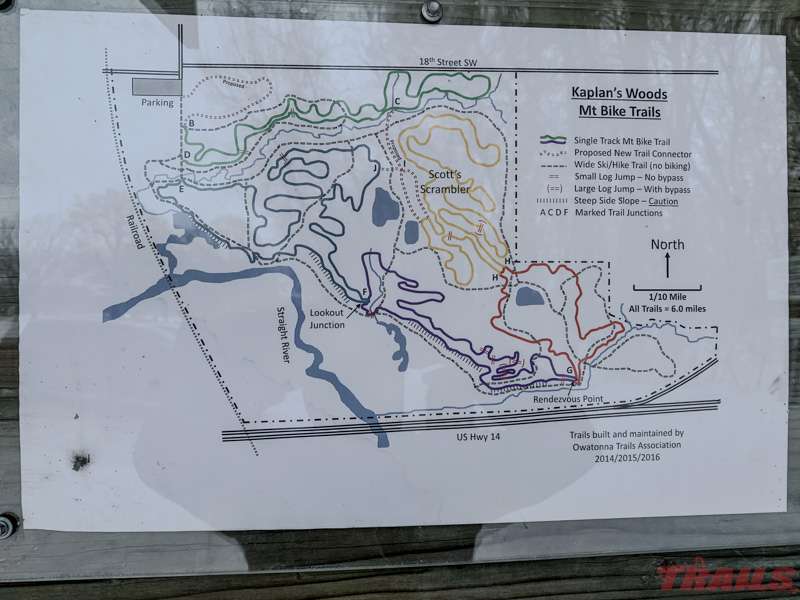 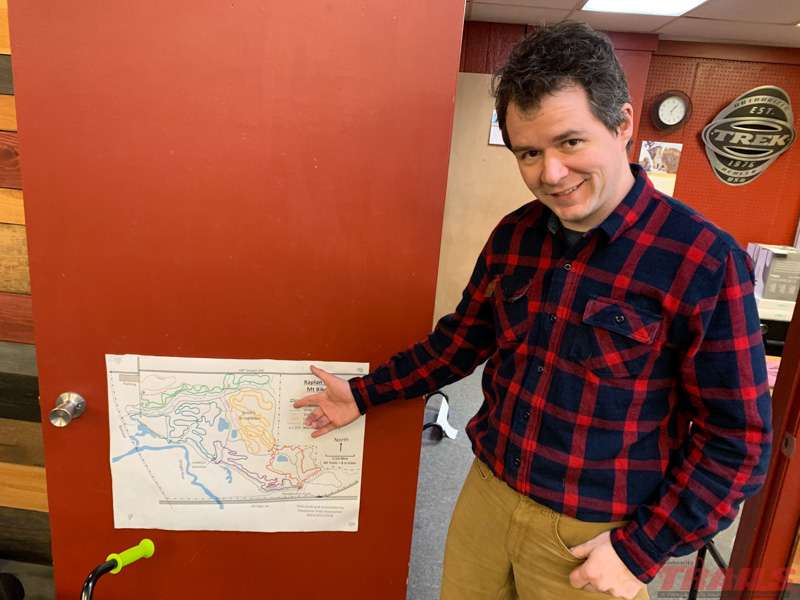 Before hitting the trails I stopped at Straight River Sports, Owatonna’s bike and sport shop, to get the scoop. Andy Boe, former employee and new owner of the shop, recommended a route to fat bike. Scott’s Scrambler, he said, would be a good one.

When I got to the park I was feeling more ambitious and decided to warm up on the green trail. That’s not a difficulty rating, just a color-coding. This trail follows a small tributary of the Straight River and actually crosses it at some point. From a previous visit in the spring I remembered the whole area having a lush, river bottom feel with trickling streams and plenty of shade.

Not this time, though. It was about 20 degrees and overcast. However, the trail was in great shape, rock hard and fun to ride with twists and turns to keep it interesting.

The green trail eventually hooked up with Scott’s Scrambler, which is sort of in the middle of the trail system. This trail had a little bit more up and down to it as it climbed away from the little streams I had been crossing on the green trail. At some point I got to what I think was the highest point of Scott’s Scrambler. I could see more trail snake through the woods down below and thought I should come back when the trees were leafed out to get the real “lost in the forest” feel.

Just like on the green trail, there were a couple of jumps with bypasses, which I took. I wasn’t feeling that ambitious after all. Max, the Pugsley, and I have a combined weight of about 280 pounds and I just couldn’t see sending that much man and metal flying through the air that day.
After Scott’s Scrambler I had to take off, but I’m definitely coming back. The trails are fun and well marked, with maps at all intersections and markers telling you where you are and where you’re headed.

The only person I saw was a guy out skiing the groomed ski trails. But that is usually what happens on a weekday afternoon. Hence, some photos of my bike leaning against trees. 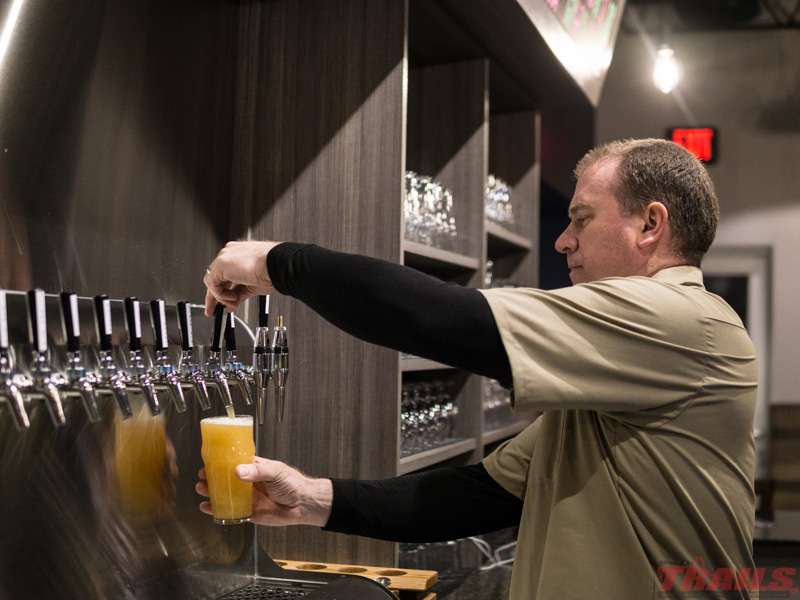 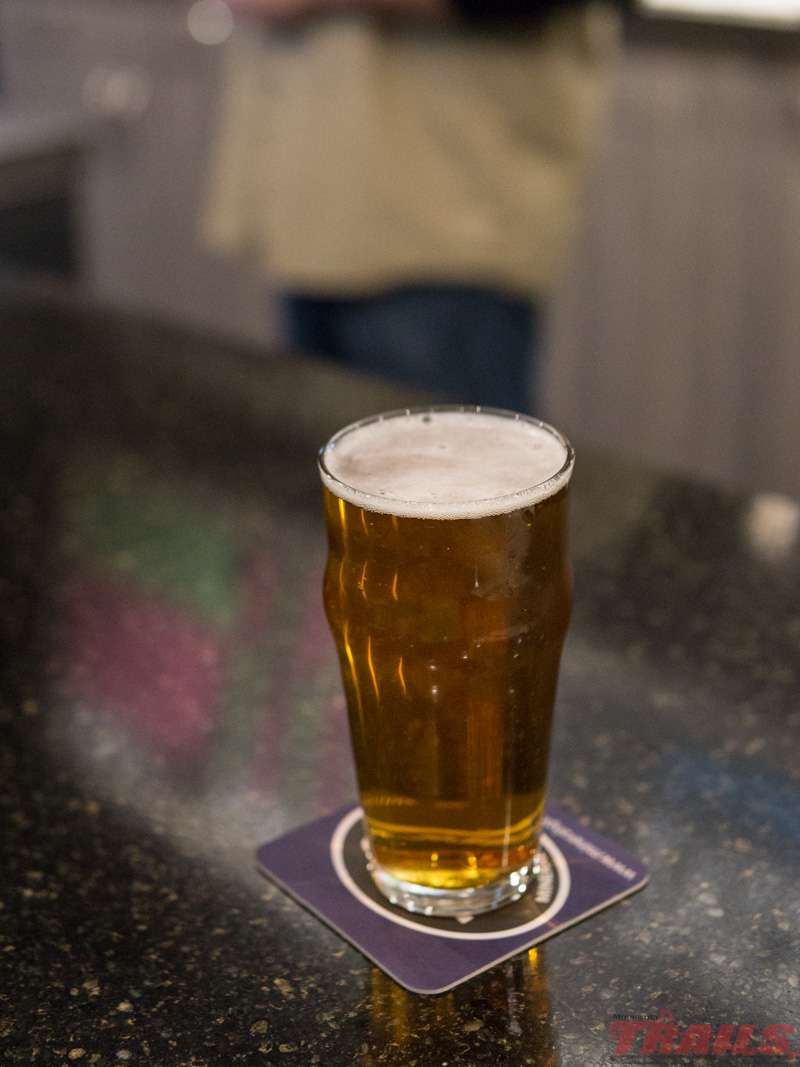 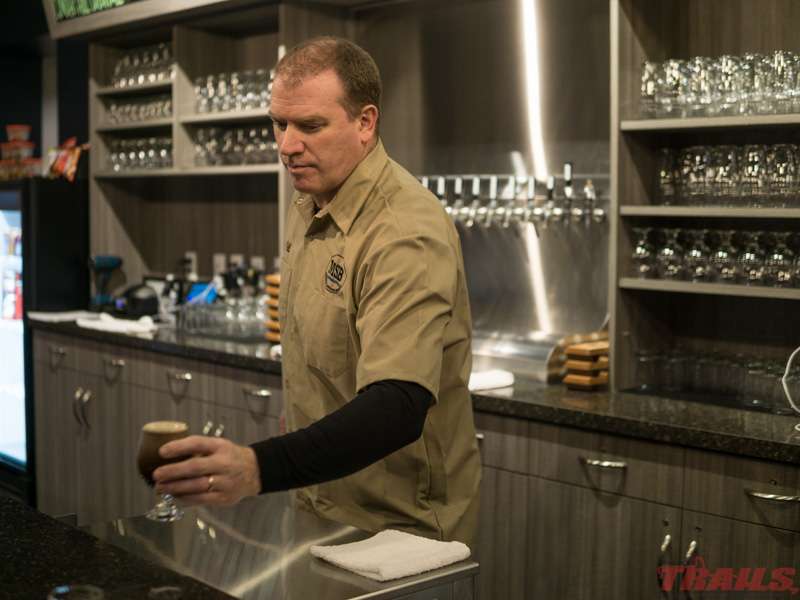 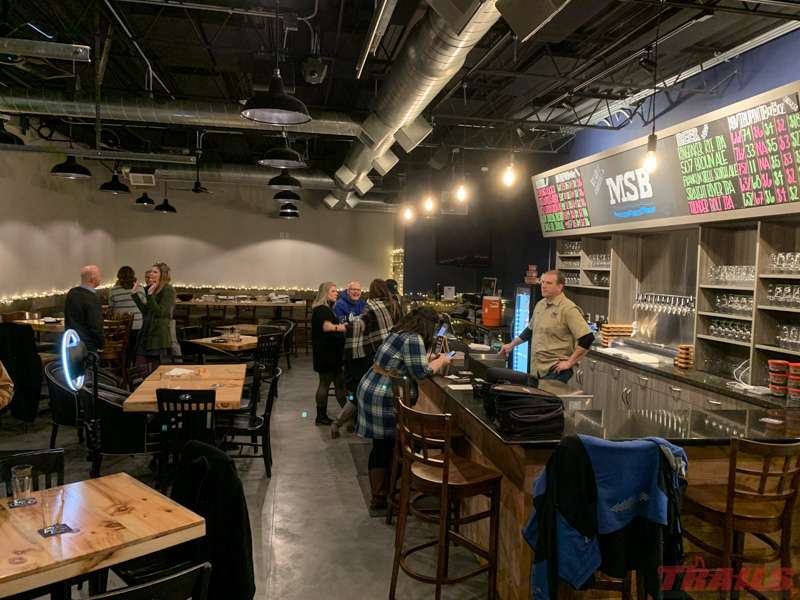 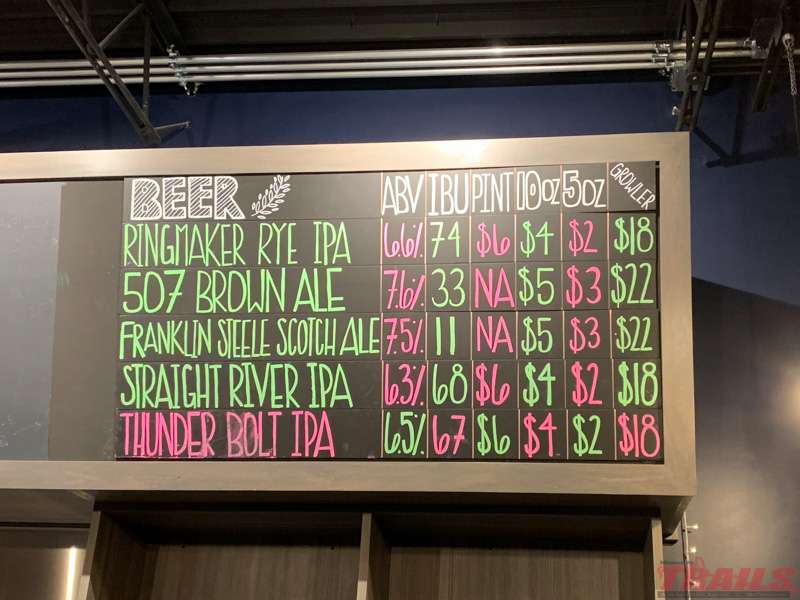 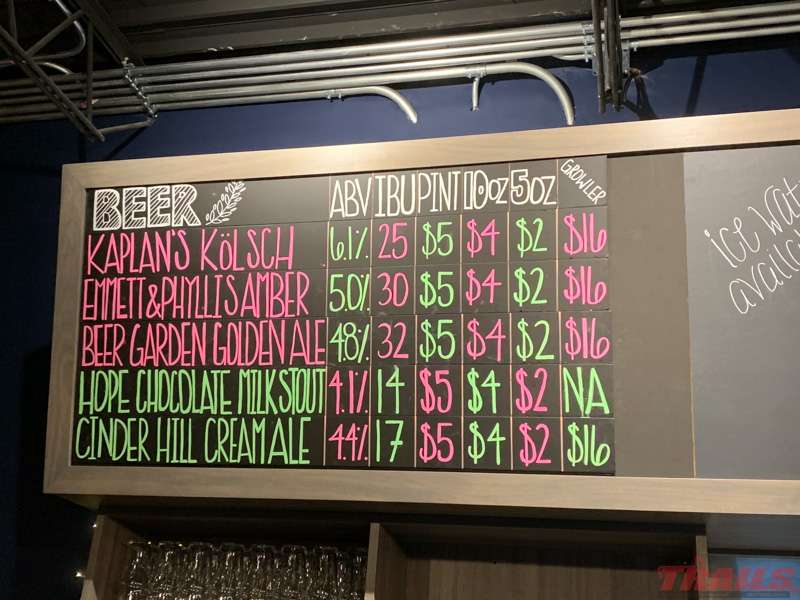 Mineral Springs Brewery is right around the corner from Straight River Sports in a former storage facility on North Walnut Avenue, right in view of the Straight River and the iconic Owatonna Power Plant. If it wasn’t for the brightly lit blue sign, you might drive right by the rectangular, grey brick building, but a closer look reveals an outdoor patio off to the side and shiny fermentation tanks gleaming behind a window. “You should have seen this place before”, owner Bill Cronin said when I sat down to sample the beers. Getting the building ready for a brewery, he said, meant a challenging remodel that included drilling into the hillside behind it to stabilize a bulging wall.

It also meant a lot of do-it-yourself for the group of owners who used salvaged lumber and countertops for the interior.

The open layout of the L-shaped room has room for about a dozen or so people to sit at the bar and about as many tables in the rest of the room. Around the corner, in the foot of the L, a counter divides the taproom and the brewing area and you can sit and watch them brew. Everything has a simple, modern and inviting look to it.

I started working my way down the list of ten beers with some tasters. It was a good mix of styles from kölsch to stout to IPAs and even newbies to the craft brew thing can find something they like here.

Bill told me that the beer names all had a connection to Owatonna’s history. The Ringmaker IPA, for example, refers to the fact that the Jostens empire-the class ring people-got their start in a small jewelry shop in Owatonna in 1897.

It was a tasty beer, too, and I liked the spice of the rye very much.

The brewery itself takes its name from the spring that flows from the ground in Mineral Springs Park and produces water supposedly as good as the famed Vichy Springs in France. According to legend, Owatonna, the daughter of Chief Wabena, was nursed back to health with the water from that spring.

The Hope Stout was by far my favorite. The roasted malts really came through, and even with lactose added, it had just the right amount of lingering sweetness. It immediately reminded me of the stout I started a few days ago and was now bubbling away at home.

The Beer Garden Golden Ale took me by surprise. It’s their lightest-looking beer, but it actually had more IBU and ABV than the Hope Stout. Often, these lighter beers are aimed at the Millcoorweiser crowd and fall flat in flavor. Not this one. It was easy drinking, but had enough hops in the finish to make it interesting. I will absolutely come back when the patio opens up for the summer and sip a few of those while watching the river. 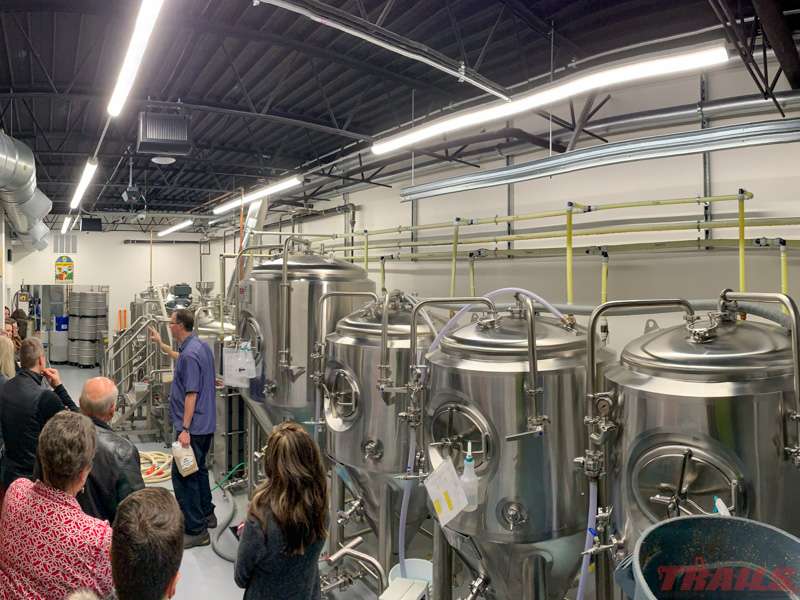 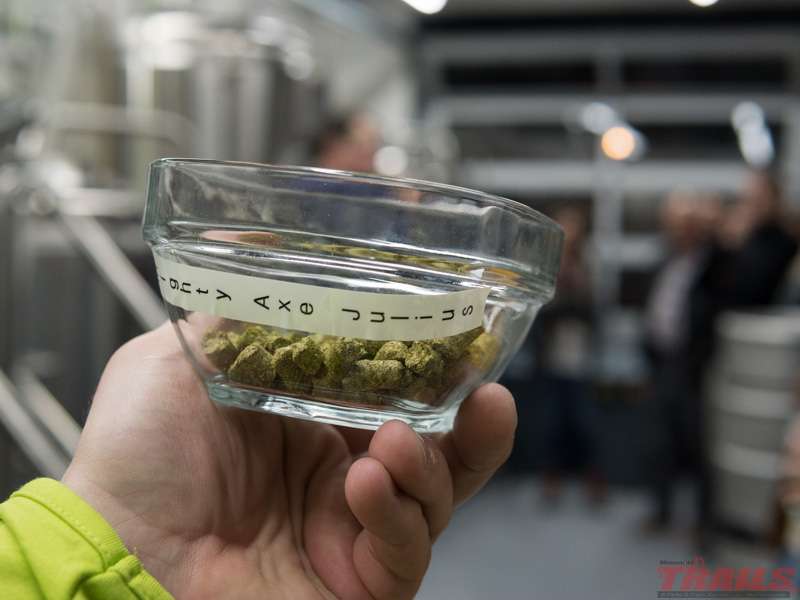 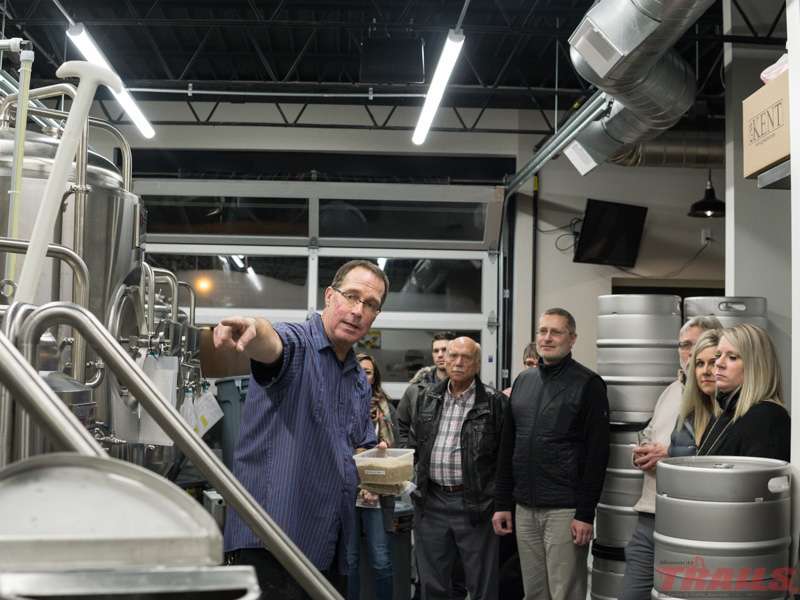 Next, it was time for a tour of the brewing room. Head Brewer Mark Sebring walked everyone through the brewing process on his 5bbl steam heat system from Atlantic Brewing Systems. While the kettles were hissing and puffing in the narrow room, he broke down the fermentation process to this: “Yeast is like your teenage son. It eats, farts and pees”. 17-year old me couldn’t agree more.

Mineral Springs Brewery got its start because ongoing revitalization efforts have brought new hotels, apartments and restaurants to downtown Owatonna and that, in turn, is expected to bring more foot traffic to the area.  A brewery seemed a perfect fit here. Since the opening in November of 2019, Bill says, the reaction from the public has exceeded expectations. “The community was excited to have a brewery”, he said.

There are no expansion plans as of yet, though Bill thinks the beer list may grow by 25 or more in the future.  “For the time being”, he said, “it’s just been awesome to have the space open and to live out our dream of being ‘Owatonna’s living room’”.

Find out more about the beers and the stories here