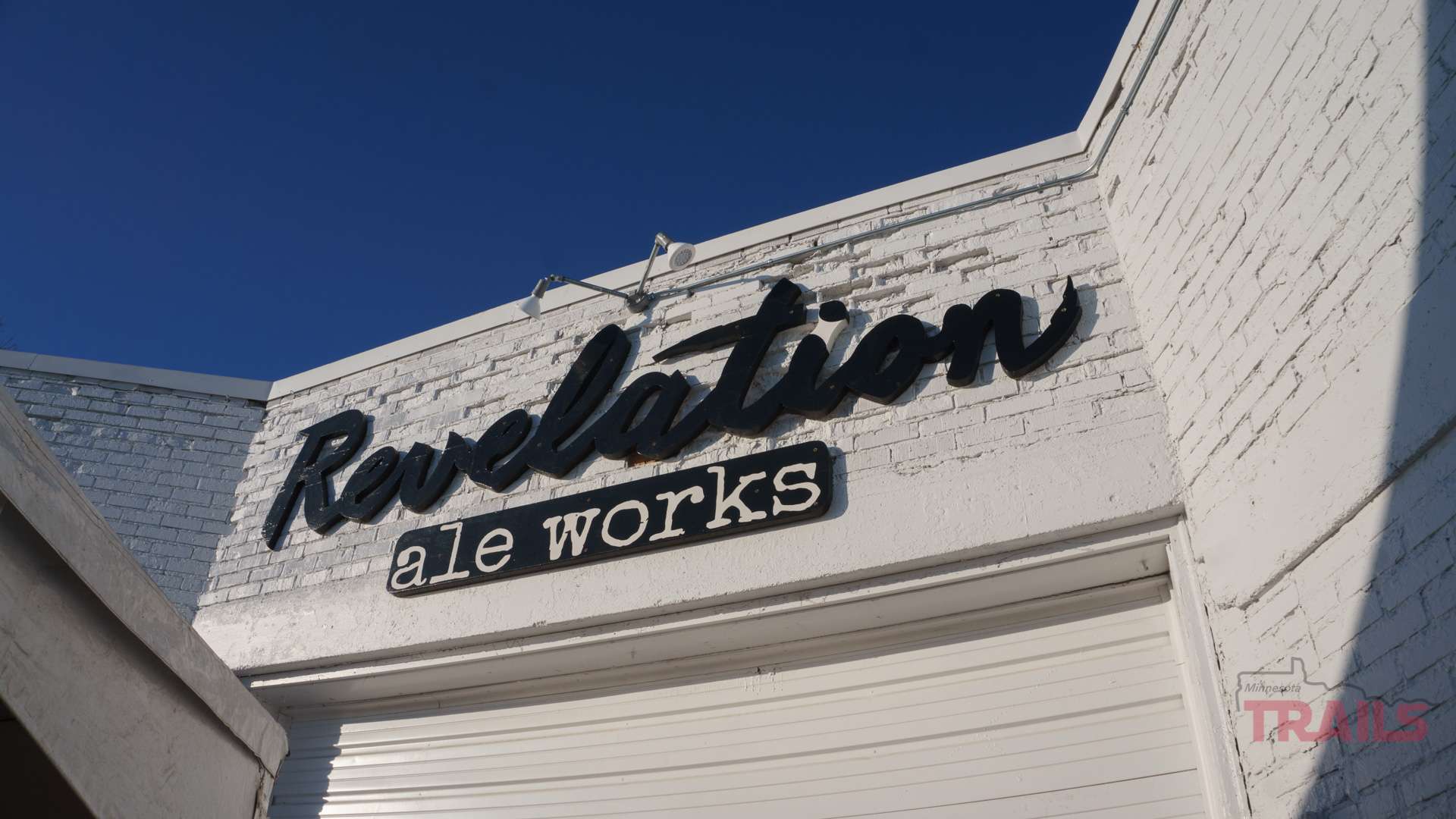 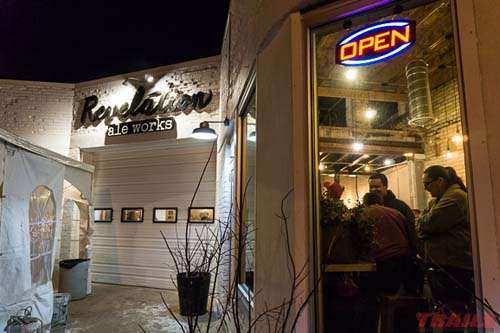 The sun was setting over the huge grain elevator on Highway 75, The King of Trails. Occasionally, a semi truck rumbled by and disappeared into the horizon. Here, in Hallock, 20 miles from Canada and North Dakota, it was a cold, quiet Saturday night.

When we arrived at the brewery, the heat was on in the warming tent, a fire was going in a portable fire pit on the sidewalk, and the Groovy Grub food truck had just fired up the grill. It was Grand Opening night at Revelation Ale Works. 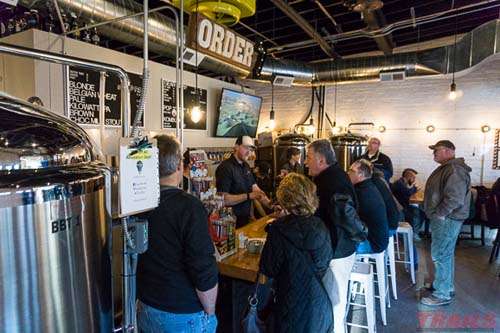 We ducked into the unassuming white brick building and settled at a table in the front room. The bar, flanked by shiny brite tanks, was toward the back and down a couple of steps. Around the corner to the left, through a small doorway, were the stainless brew kettles, mash tun and fermentation tanks. It was a cozy setting with a mix of exposed and painted brick, new and old pipes and rafters and an ancient industrial heater, now painted a bright yellow, hanging over the wood slab bar.

But it wasn’t always this way. “The roof had to be redone as it resembled Swiss cheese,” said owner and taproom manager Lindsey Evenson. That was only the beginning. “We tore off the roof in the front building and raised it up. We added heating and cooling, re-did plumbing and electrical, and on and on. We had to use a chisel hammer to take down a lot of tough plaster to expose brick.” 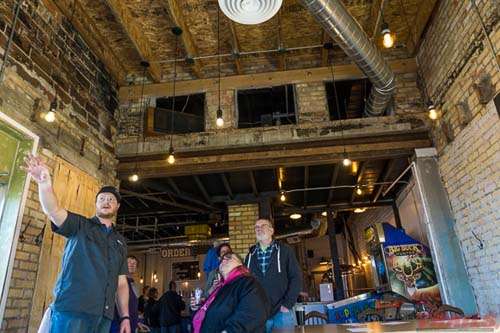 Ryan Evenson explains how the gas station turned into a brewery.

Lindsey and her husband Ryan, together with Ryan’s brother Josh and his wife Ashley, bought the crumbling building for $100 and in one year turned the 1939 Standard Oil Station near the Canadian border into a brewery and taproom.

It all began with a starter homebrew kit Lindsey bought for Ryan when they were living in Oregon where they had fallen in love with craft beers. “I was thinking that it would be cheaper than buying beer. I was wrong,” Lindsey said.

In 2013 they moved to Hallock and started Red River Hops farm in 2015. Ryan’s brother Josh, now head brewer at Revelation, pushed them to open a brewery. “Knowing it would be good for our community to save a historic building, bring business to town, create a gathering place, and promote Hallock in the region, we jumped in with Josh and his wife,” said Lindsey. 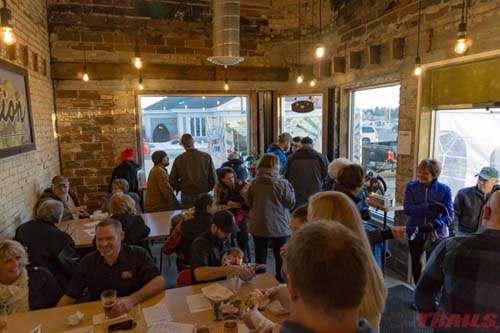 To buy a decaying building and start a brewery in a town of less than 1000 in a sparsely populated area of the state took some consideration, but Hallock finally got the nod. “We decided that a brewery in Hallock, besides taking less capital to open, would make more of an impact. We love rural America and felt that opening up in a small town would do a lot to preserve the history and promote future growth,” she said. 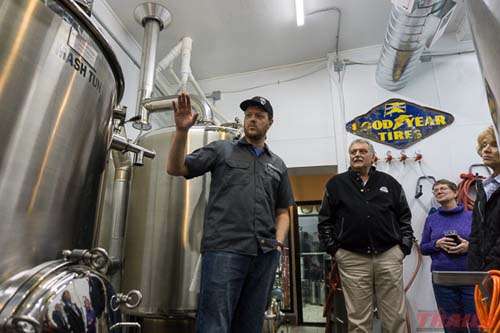 Ryan Evenson explains the brewing process. A sign on the wall reminds of the building’s past 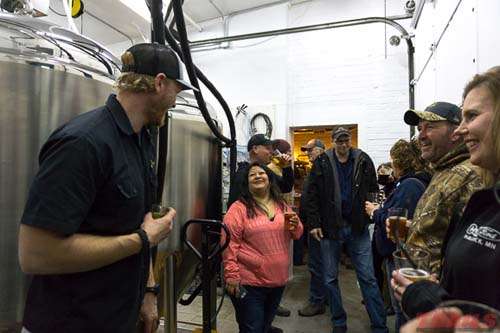 “What do hops smell like?” Josh Evenson shares a laugh with patrons.

The idea of Revelation Ale Works moving into a building with deep community ties was well received in Hallock. “When people found out we were keeping the original tile in the front building, they told us that there used to be a tile manufacturer in town that made those tiles and people started bringing in extra pieces from their own home project from way back when. Now that we’re open, locals come with their families, growlers, and friends to talk and eat take-out from the local restaurants. They have come in just to tell their stories about the building and all the memories they have of the place before we restored and transformed it. It has been really gratifying that our hope to save a piece of Hallock history and give it new life has been embraced by people,” she said. 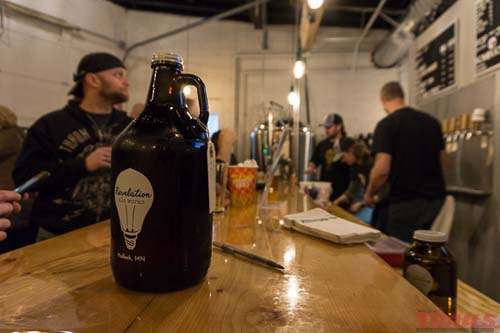 That evening those people began pouring in with flowers and cards. Old couples and young couples with kids milled around, played the pinball machine and sampled beers and sodas. When one local man’s name was called for a door prize drawing, the crowd cheered and whistled. 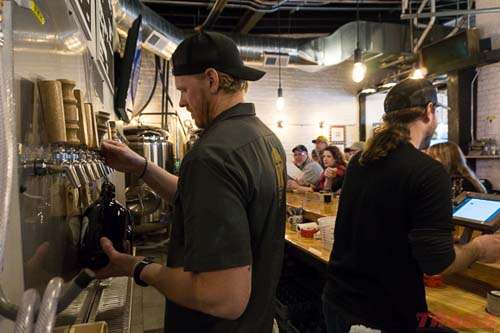 Josh Evenson filling a growler where once cars where serviced. 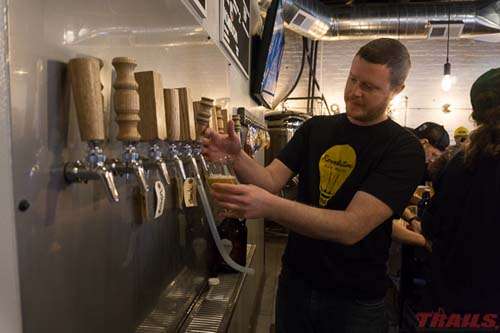 Local Lori Bergh doesn’t consider herself a beer drinker, but her favorite was the Chocolate Milk Stout. She said, “It’s been a big hit, bigger than people thought it would be. Her friend Betty Youngren also thought it’s been a positive thing for the town. “Hallock is hopping with new businesses and we see a lot of people from out of town now,” she said.

Dave Sears came from Grand Forks, North Dakota to sample the beers. “Right now I’m between the Belgian and the Blonde,” he said and took a sip from his sample flight. “OK, the Belgian is my number one.”

He added, “The atmosphere in here is awesome. I love the look of the old gas stations.” 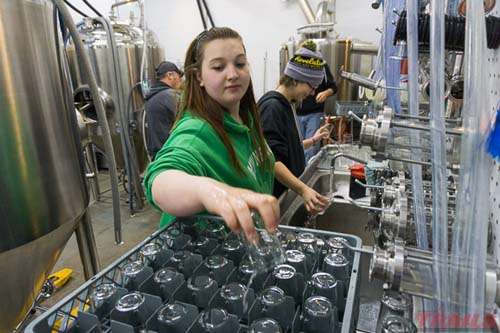 Everyone helped out on opening day. 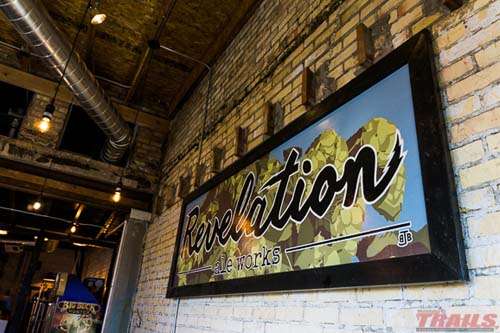 Besides growing some of their own hops at their Red River Hops farm, Revelation  also sources their malts locally at Vertical Malt in Fisher, Minnesota, just west of Crookston. Adam Wagner had stopped in for the Grand Opening at Revelation that evening. His company, Vertical Malt, has been selling small batch craft malts since 2016 and says he can offer what giants like Cargill can’t: small batches of locally grown and custom malted grains in batches ranging from 200 pounds to two tons. “Craft malting is where craft beer was ten years ago,” he said, but he is optimistic about the future. “We’re experiencing a farm to bottle movement and we think that is a powerful message.”

Revelation Ale Works’ plans are to one day grow all of their own hops, expand their distribution and maybe add a bottling line. Right now, their Brown Ale is aging in Whiskey barrels from Far North Spirits, another Hallock business that works farm to bottle and makes rum, gin, vodka and whiskey.

I might have to make another trip up there when they tap that keg. 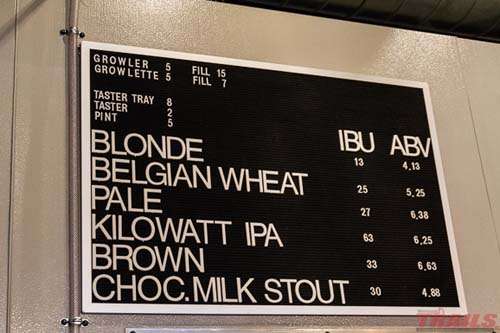 Since I brought my wife Jen and in-laws Mike and Theresa along for this visit, there’s four recommendations this time:

Jen: Her mission in life is to taste every wheat beer in the world and she stuck with Revelation’s version that night. “It’s hard to find an American wheat beer that compares to a German one.”

Theresa: Enjoyed the Brown because of the low IBUs and a good, nutty flavor.

Mike: Couldn’t decide between the Blonde and the Brown, so Ryan made him a Black and Tan. “He did a great job with it, and you get a little bit of each flavor with each sip.”

Me: After being out in the cold, skiing for a few hours I bounced back and forth between the 6.6% ABV Brown for warmth and the Chocolate Milk Stout, because I love dark beers in the winter, especially when it’s 8 degrees outside and there’s a bonfire just outside your window. 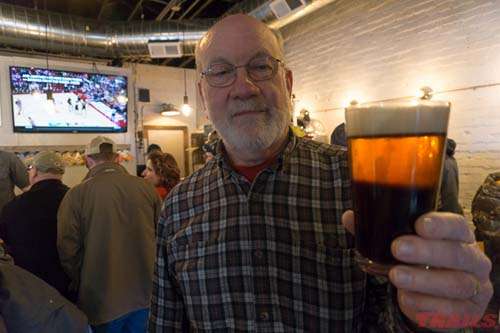 Black and Tan: When you just can’t decide.

When you drive north on Highway 59 past Thief River Falls, you’ll notice that there’s less and less to block your view. Farm fields, some stands of trees, the occasional bump-in-the-road-town and the ever-present tracks of the Canadian Pacific Railroad, that’s about it. 20 miles before you get to Canada, there’s Lake Bronson State Park, about 15 miles southeast of Hallock, MN. 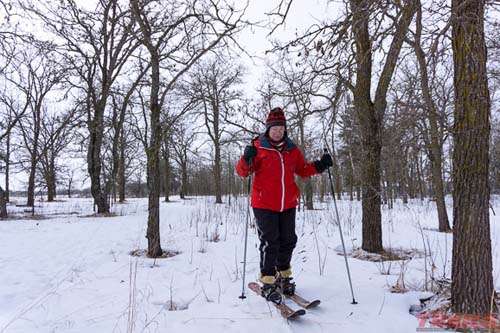 Hok Skiing through the oaks at Lake Bronson State Park

In 1936 the south arm of Two Rivers was dammed up to provide the town of Bronson with drinking water, because a drought had left wells in the area dry. In 1937 Two Rivers State Park became Minnesota’s 23rd state park. (that year nine other state parks were established in Minnesota) and was renamed Lake Bronson State Park in 1945.

My wife Jen and in-laws Mike and Theresa drove up there to go skiing. The park had just started grooming the ski trails again with the help of local volunteers and the Parks and Trails Council of Minnesota. But, the week before we went it rained and the promised 18″ of groomed base turned into a foot of crust. It was time for Plan B.

My friend Matt had introduced me to ski-shoes, also called Hok Skis, a relatively new thing in Minnesota. Imagine a snowshoe and a cross-country ski having a baby and you’ll have some idea of what they look like. 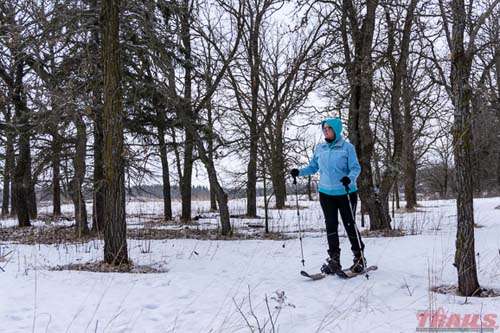 A Hok Ski is about two to three times wider than a Nordic ski and comes in lengths of 125 or 145 cm, the shorter being more nimble in the woods and the longer being more stable on downhill glides. The center third of the bottom is covered in a fleece material that provides grip, like the scales on a regular ski, but fuzzy. The idea is to get off the beaten path and break your own trail. They’re wide enough to keep you on top of the snow and you can coast down hills without sinking in. They come with either three-pin or universal bindings, which allow you to use your own winter boots.

The four of us started at the visitor center, which is heated and has bathrooms and a small changing area. It was a partly sunny day with temps in the low 20s, very comfortable conditions. Luckily, a crazy 30-minute blizzard early in the morning had covered everything in an inch or two of fresh fluff. We started by working our way up the west side of the lake and stayed off the walking trails as much as possible to get the full backcountry experience. 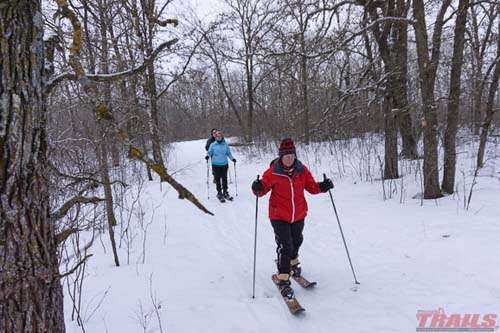 Hiking trails on the north side of Lake Bronson 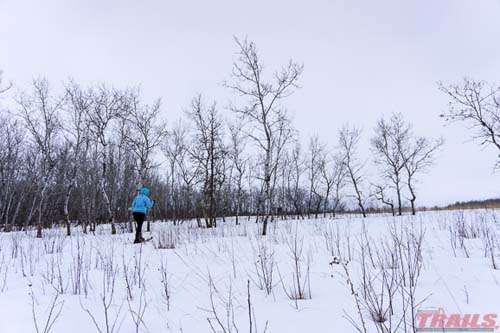 Between forest and prairie at Lake Bronson State Park

Lake Bronson has an island with canoe-in campsites, but that day the lake was dotted with fish houses. I thought about skiing over there, but my plan was voted down. Instead, we kept going through the wooded part of the park, and then turned northeast on a connecting trail. We looped back through a prairie landscape covered in bright yellow grasses that stood out nicely against the snow and came back near the WPA water/observation tower the park is famous for.

We only scratched the surface of the 14 miles of hiking trails and we’ll have to come back for more.

If you’re looking for a fun day trip close to the metro area, grab your skis and give the trails in Becker a try.

Reap your reward for all of the hard work you do on the trails and treat yourself to a post-ride, barley-based electrolyte drink.

Recently, the Trails team gathered its own band of explorers in search of the truth, but only found a great day outside on well-groomed trails-without bloodshed.

Glacial Lakes State Park preserves a landscape formed by glaciers, like no other in Minnesota.

This iconic state park is a year-round destination on Minnesota’s North Shore.