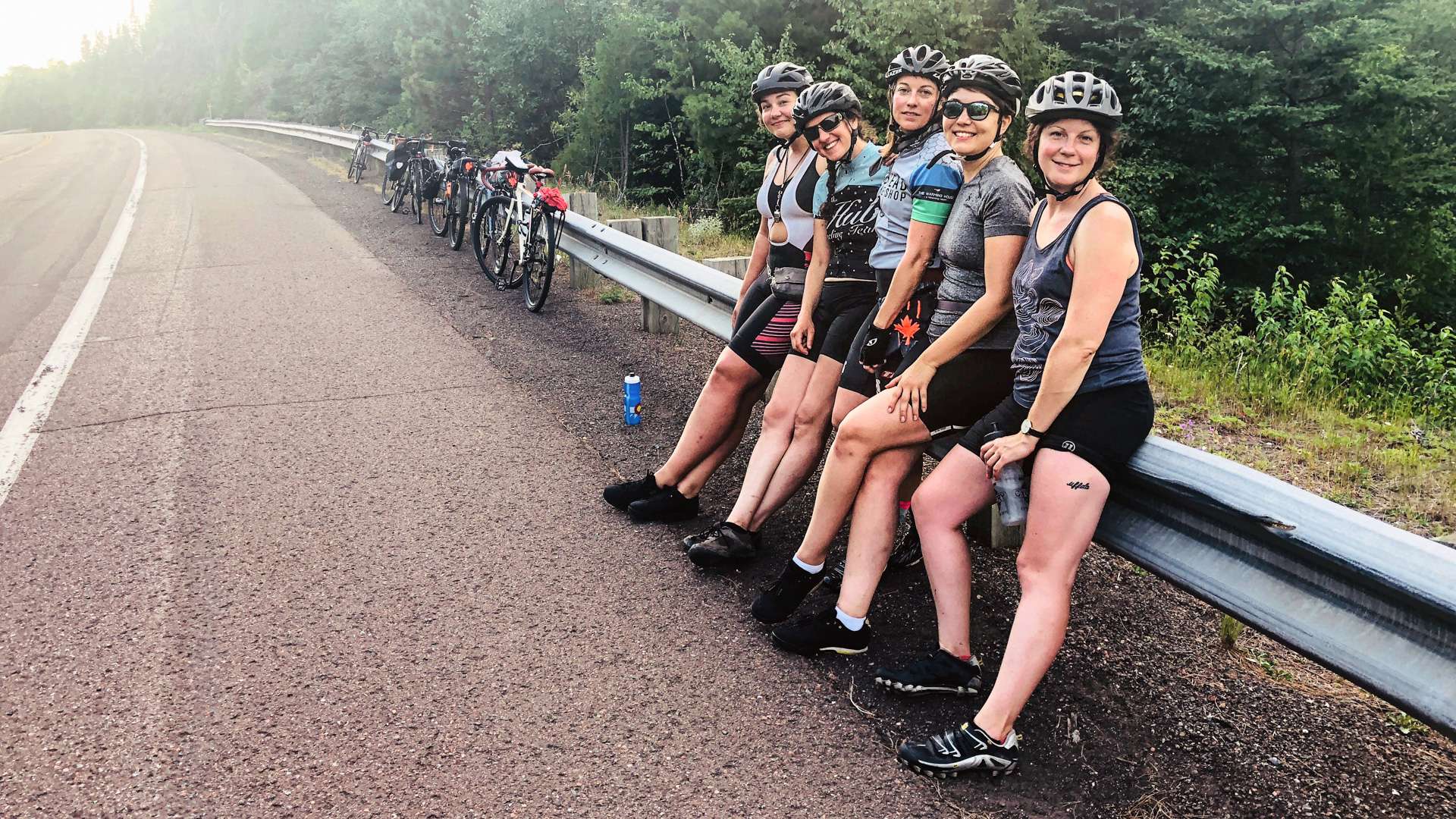 The first time I rode the Gitchi-Gami trail was on an organized ride called the Split Rock Tour. My old, neglected bike was ready to fall apart and screamed with every pull of the brake. The last nine miles I struggled with a flat, but I loved that ride and credit it to the beginning of my deep adoration of Minnesota’s North Shore. Back in early January of 2018 I was unable to walk, recovering from a knee injury and surgery and I began daydreaming about another ride on the north shore of Lake Superior. That same afternoon, I texted a handful of friends about my dream trip, things began to take shape, and Emily, Michelle, Amanda, Ann, Shanai and I  finally set off on July 27, 2018 for three days of self-supported biking from Duluth to Canada. 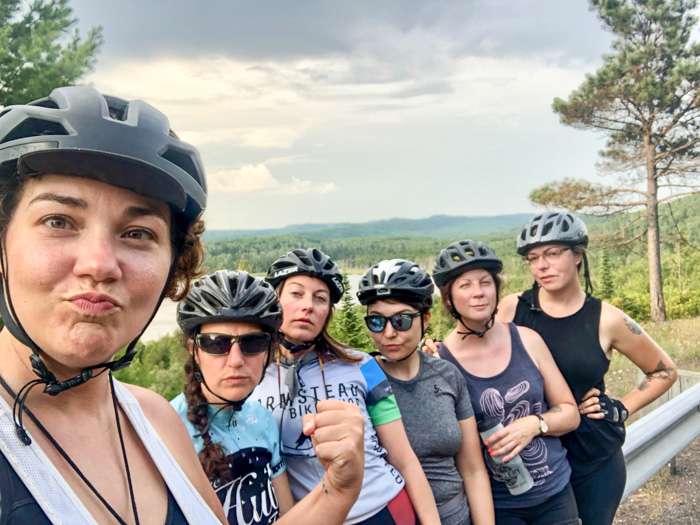 There were six of us, all women, drawn to each other by a strange combination of being sporty and artsy and a little bit weird, and with a healthy balance of dreamer and problem solver in all of us. We all had biking experience, but most of us had never done a self-supported bike camping tour. 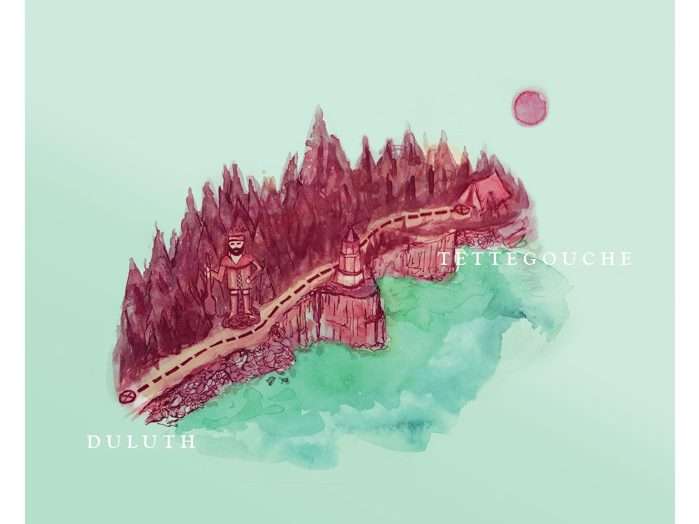 The forecast called for highs in the 70s, light wind and no rain, near perfect conditions. The air was cool in the morning and it felt great to finally be biking after all of the planning.
Our first roadside stop was at Tom’s Logging Camp store, about 20 miles from Duluth. We could have spent days in there, marveling at fanny packs and Lake Superior mood rings, but settled on about an hour. In Two Harbors we visited another roadside attraction that’s been dubbed Pierre, the Pantsless Voyageur. This 20-foot statue of a French explorer has a canoe paddle, shirt and boots, but appears to be sans pants pantalons. 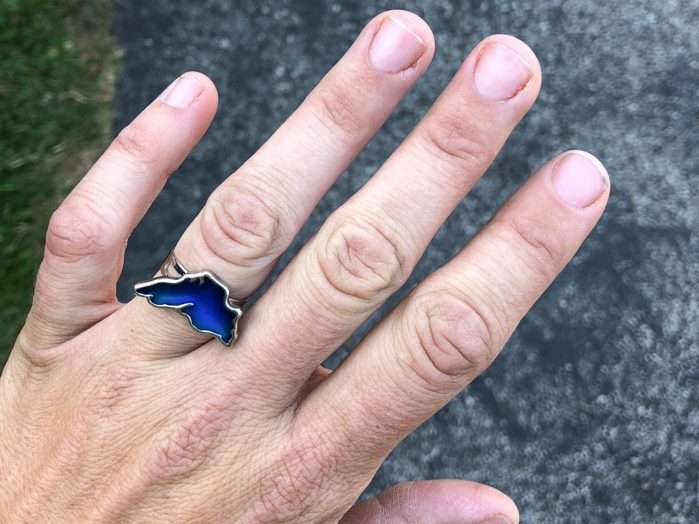 Back on our bikes, our route then wove from the shoulder of Scenic Highway 61 and back to the lovely, paved Gitchi-Gami trail. My favorite part of the trail on this first day was the tiny part that hugged the side of Silver Creek Cliff and overlooked the lake, which appeared like an ocean from this angle. We rolled into camp at Tettegouche State Park with just an hour of daylight to spare. After setting up tents, we walked to the shore and waited until the moon rose while we passed around a flask of Bourbon. We dipped our faces in the lake. The water was cool and crisp. We skipped our showers that night, but the lake water on my face felt better than any spa treatment I could imagine. 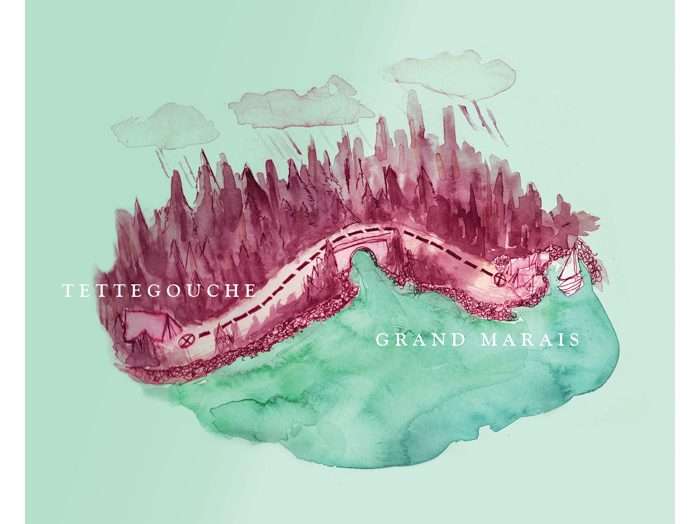 We decided we would make fewer stops and move a little faster to arrive in Grand Marais earlier in the day. Our mid-day stop was scheduled at Temperance River State Park, but when we biked up, the parking lot was bustling with cars and busses and we decided to take our break a few miles down the road in Tofte, instead. We dodged a sudden rain shower at the Coho Café and were back on the road. There were hills on the route, but none were terrible. We took it slow, reminding each other to hydrate, and stopped often to fuel up on snacks. 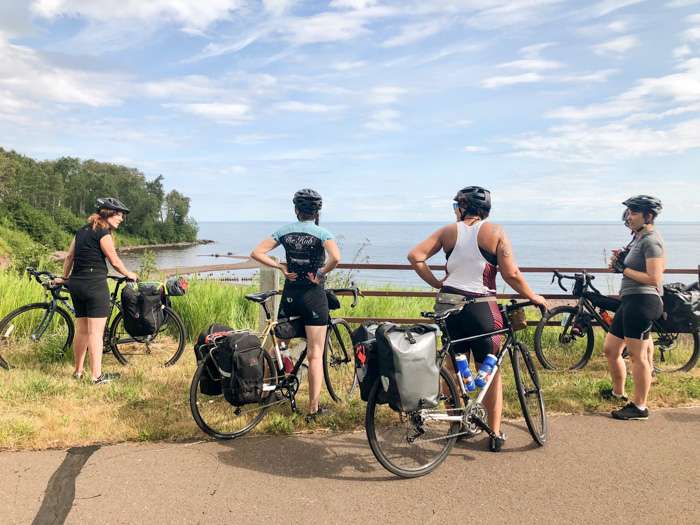 There was a break in the trees about 10 miles away from Grand Marais, as we descended into town and the view broke open into the most glorious sight of the lake. After setting up camp at the municipal campground in Grand Marais and a hot, wonderful shower, we hit Sven and Ole’s for pizza and beer. We lounged in our corner booth, practicing singing the Canadian national anthem, maybe just a little too loudly and maybe just a couple of times too often. We talked about becoming a touring cycling choir, the Minstrel Cycles. We’d make our debut at the Canadian border the next day. We’d be famous, no doubt. 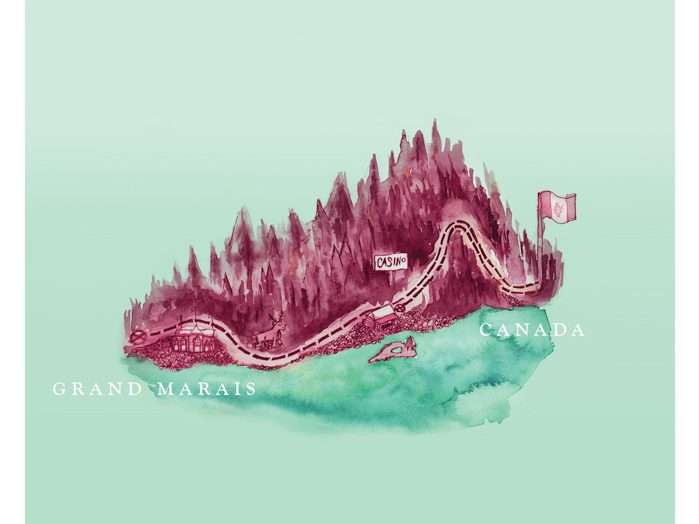 North of Grand Marais we knew there would be significantly less traffic and healthy, plump shoulders for the remainder of the ride and we set off for Naniboujou Lodge’s brunch buffet early in the morning. The brunch most definitely lived up to our expectations and the colorful designs on the painted ceiling alone were worth the visit.
It was by far the prettiest leg of the trip, biking close to the foot of the lake early in the day. We were to stay at a cabin on the lake about three miles before Grand Portage Casino for this last night, right on the shore by the Hollow Rock. But to get to Canada and back we needed to bike past the cabin, past the casino, through Grand Portage, and add an extra 12 miles with a tough climb called Mount Josephine in the middle. Soon, the border was in front of us and we got our passports stamped as we entered Canada. 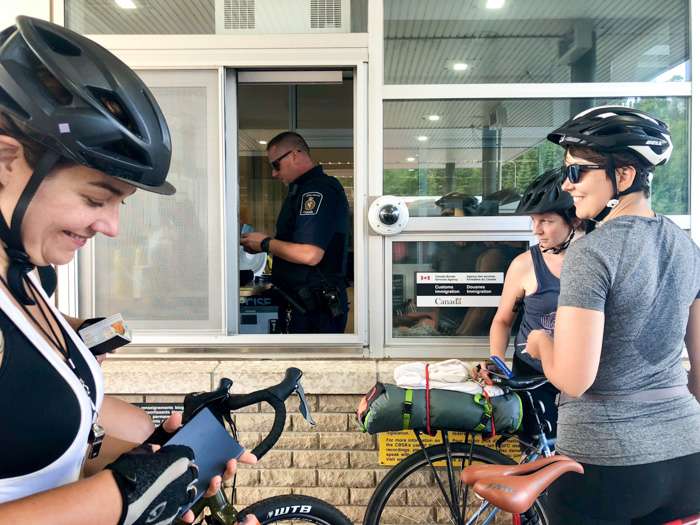 At the visitor center I sent off some postcards to family to prove that we had actually made it. We switched shoes and went on a mile-long hike to High Falls on the Pigeon River, Minnesota’s highest waterfall at 120 feet. Across the border, at Minnesota’s Grand Portage State Park, you can see the falls from a distance. On the Canadian side the trails take you right to the top of the falls. On the way back we had to deal with Mount Josephine again. While in Canada, we had talked about what goes through our heads when we’re in the middle of something challenging or torturous, something that helps us get through it and we decided it helps to just think “This is just what I do now.”  And for four miles, climbing up Mt. Josephine was just what we did. The descent was fast and glorious and we had a good night’s sleep at our cabin. 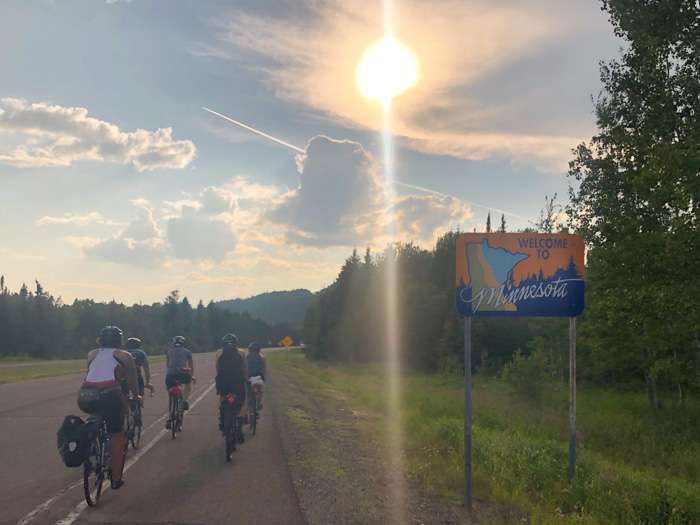 It took only three days to get used to the amazing bike-packing lifestyle and we were sad to leave it behind, when our shuttle driver arrived the next morning. We made some stops for coffee and donuts, but the rest of the three-hour ride was filled with fun conversation, terrible 90s songs-sung loudly, and brainstorming about epic tattoo designs to pay homage to this trip. Back in Duluth it felt like the trip was officially over as we unloaded and then reloaded our gear and headed back to our lives in Minneapolis.

In the days and weeks following the ride, we had many people reach out to us, mostly women, telling us how inspired they were seeing our posts on Instagram and Facebook. They said that seeing us on this ride made it made it seem more attainable and that they would love to do a trip like it.  It did feel great to push ourselves into the unknown and we think it is important to spread the message that you don’t have to be a biking pro to reap the benefits and feel the freedom that comes with a self-supported tour. We weren’t experts and we weren’t athletes, but this trip wasn’t out of our wheelhouse, bad knees and all. It isn’t earthshaking, or crazy. It’s just what we do now. 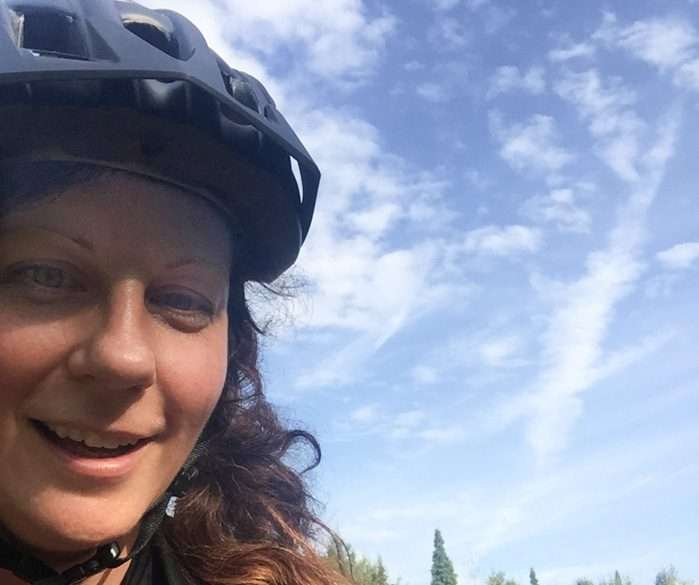 Kimberly Boustead is a designer and long-time bike commuter, living in Minneapolis, who values the amazing parks and trails of Minnesota as the most enjoyable way to break free from a screen.

20 miles from Canada and North Dakota, Revelation Ale Works serves up cold beers to warm you up after skiing Lake Bronson State Park.

14 Fall Hikes Near the Twin Cities

These wonderful fall hikes are all within an hour (or so) of the Twin Cities and make for a quick getaway when the weather is nice.

It’s been another week of cancelled plans and life upside down.