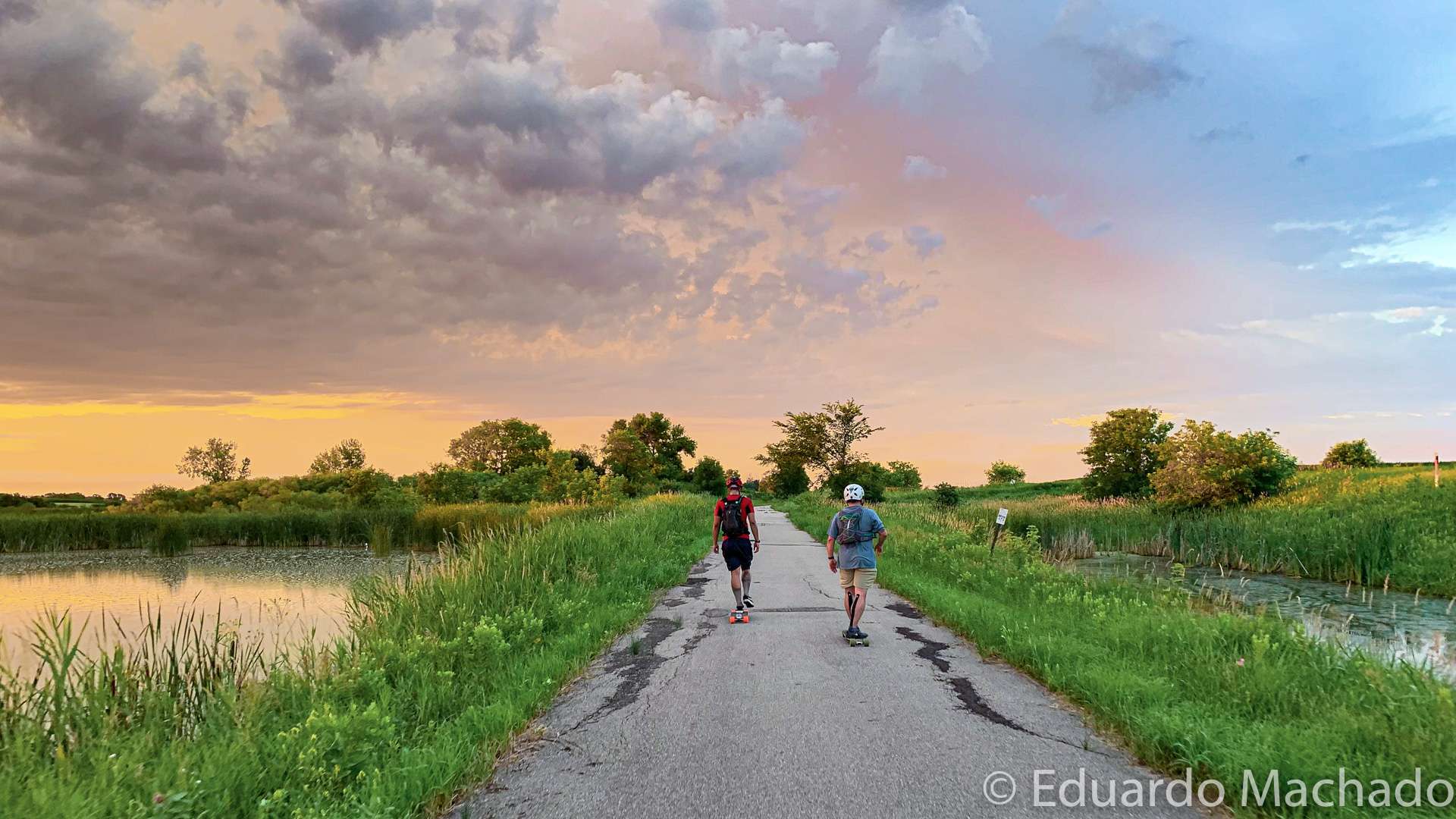 Competition Skateboarding on the Central Lakes and Lake Wobegon Trails

The Lake Wobegon and Central Lakes Trail system is known for being a destination for walkers, bikers, runners and inline skaters. It connects Waite Park and Fergus Falls with a continuous path that brings thousands of visitors to central Minnesota each year. They ride the Caramel Roll Ride and the Rail Trails 100, run the Lake Wobegon Trail Marathon and participate in a host of other community events. 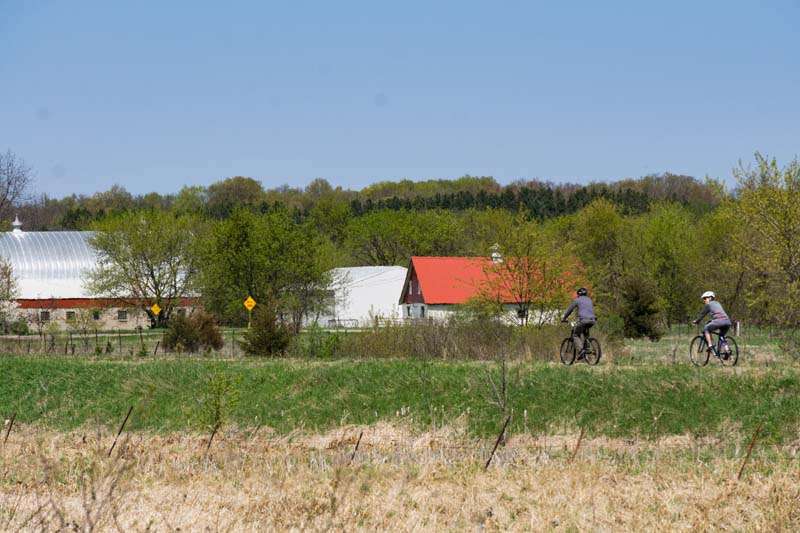 But last July a different group took advantage of the 120-mile stretch of this gentle, paved grade and held the first ever Skate Central Lakes Endurance Festival, which brought competitors from the US, Canada, Brazil and Germany to central Minnesota-on skateboards.
The Skate International Distance and Supercross Association (SkateIDSA) organizes events in the US and countries around the world, but this is the first time a contest like it was held in Minnesota, with racers competing for the fastest time over 200 miles in three days.

On day one, 19 racers ages 20-56 left the Fergus Falls trailhead on the Central Lakes State Trail with the goal of reaching Saint Joseph, 106 miles away. The second competition day had everybody start in West Union to race 62 miles back to Fergus Falls. The final event was an out and back of 35 miles starting and ending in Fergus Falls. 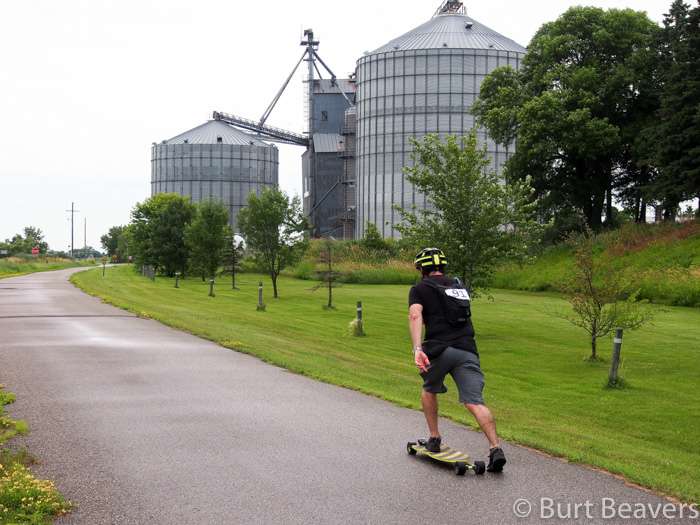 Calleigh Little from Vancouver, WA is president of SkateIDSA. She says she saw an ideal location for a long-distance race in the two central Minnesota trails when she biked them on a cross-country trip in 2018. Working with the Minnesota Department of Natural Resources (DNR) and the Fergus Falls and Saint Cloud tourism bureaus, she put together an event that took nearly six months to plan and 10 volunteers to execute. 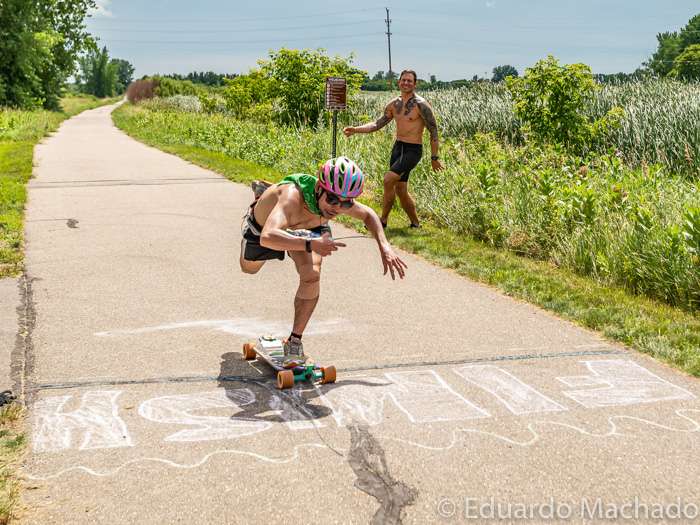 The event went as scheduled, she said, though some riders faced obstacles besides rainstorms and high winds. “We had four broken boards from [hitting cracks in the pavement], one hospitalization from a prior injury and a few DNFs (did not finish) due to the challenge of the course. But ultimately, some very accomplished racers truly laid it out on the line,” she said.

It sounds simple to just jump on a board and go, but there’s a lot more to competitive skateboarding, both physically and mentally. 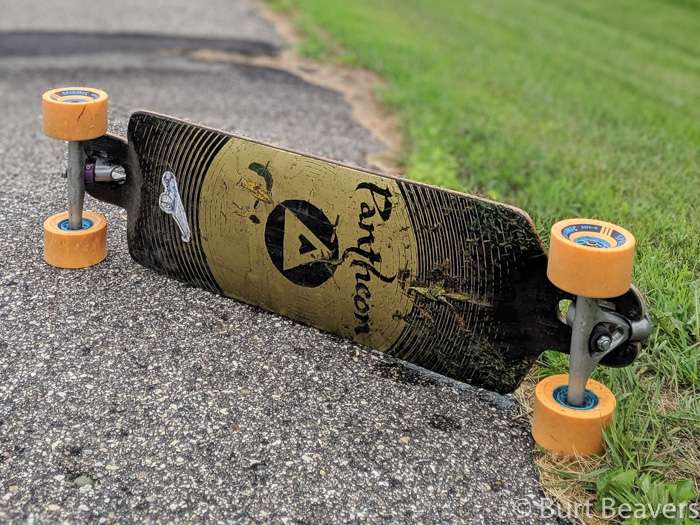 There’s a special technique to long distance skateboarding, too.  ”Many riders switch between pushing with their legs, and a form of pumping the board to undulate themselves along to save energy,” Little said.
But even highly trained athletes struggle to keep up morale when attempting these ultra-long distance races. Little, a 12-year veteran of the scene and USA Women’s Ultraskate champion two years running, said, “It’s easy to fall apart when you think you’ll never hit the finish.” 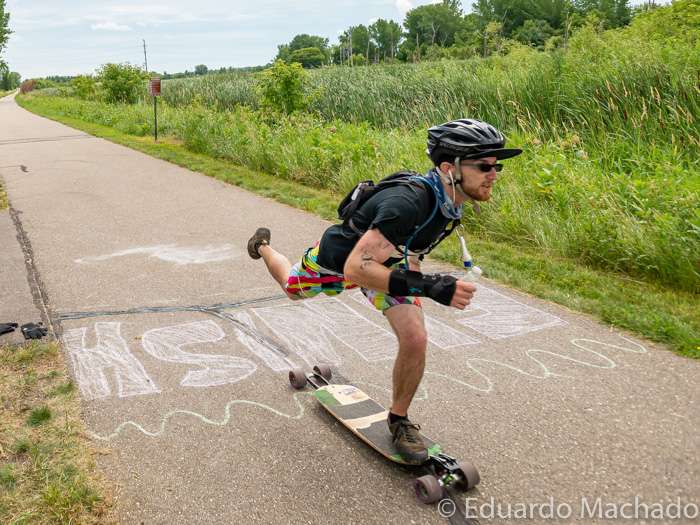 Ultimately, long-distance skateboard racing is a competitive sport, but there’s also camaraderie and that helps with the mental game. Especially when racers cheer each other on.  Chuck Fritz from Des Moines, IA, has experience with long-distance running and biking events and competed in the Arrowhead 135 Winter Ultra Race. About a month before the Skate Central Lakes Race he decided to buy a skateboard and compete in the Minnesota event, just to try it.  ”I was the last person to finish on Friday and Andrew Andras, who finished first, met me out on the trail and finished the last mile with me,” he said and praised the other racers for waiting at the finish line until he rolled across. “I’ve done a lot of events, that’s not how it always works,” he added. 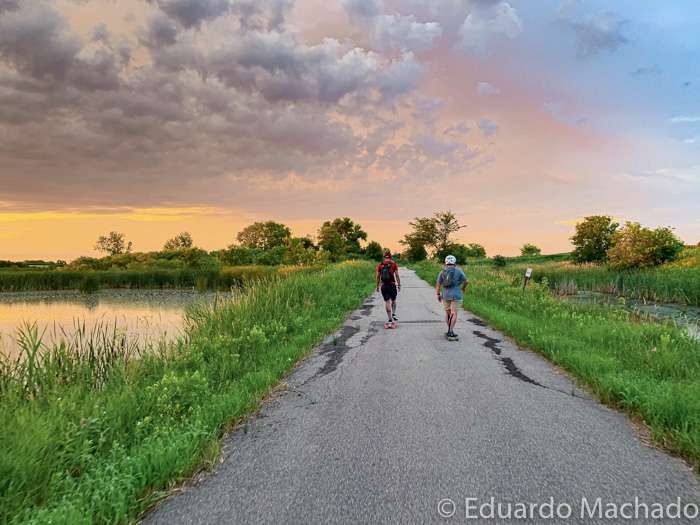 Eduardo Machado from Brazil started street skateboarding and learned skateboarding tricks as a teenager. Now in his mid-thirties, he said long-distance skateboarding is his way to challenge himself and to beat his own time. This attitude earned him an 8th place finish, but he didn’t come to Minnesota just to compete. It was about making personal connections, too, and to meet some of the racers he’s only known from photographs before “When you are in another country you see those guys with their trophies and the amazing things they do and you realize maybe, someday, I can ride side by side with those guys. I was talking to them on the Internet and now I am friends with them. This is the big trophy for me,” he said.  The heat, rain and wind he encountered during the race made for tough conditions, but he plans to do it again.
“This Minnesota race is the best race I ever did and I need to do it next year, for sure,” he said. 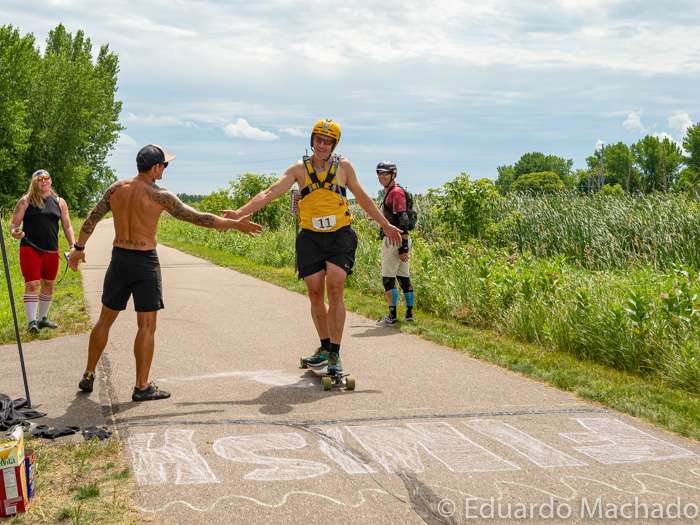 Just like Fritz and Machado, Little thinks it’s about more than logging miles in the fastest time possible. She calls her growing sport “an inspiring form of competition” that brings together a small, but tightly knit group. “Joining the long distance skateboard community,” she said, “is like being adopted into a family of crazy, loving, dedicated people.”

Take Your Next Meeting Outdoors

If your new home office is also a laundry room, you might want to try one of our custom Zoom backgrounds!

No Campfire? No Problem!