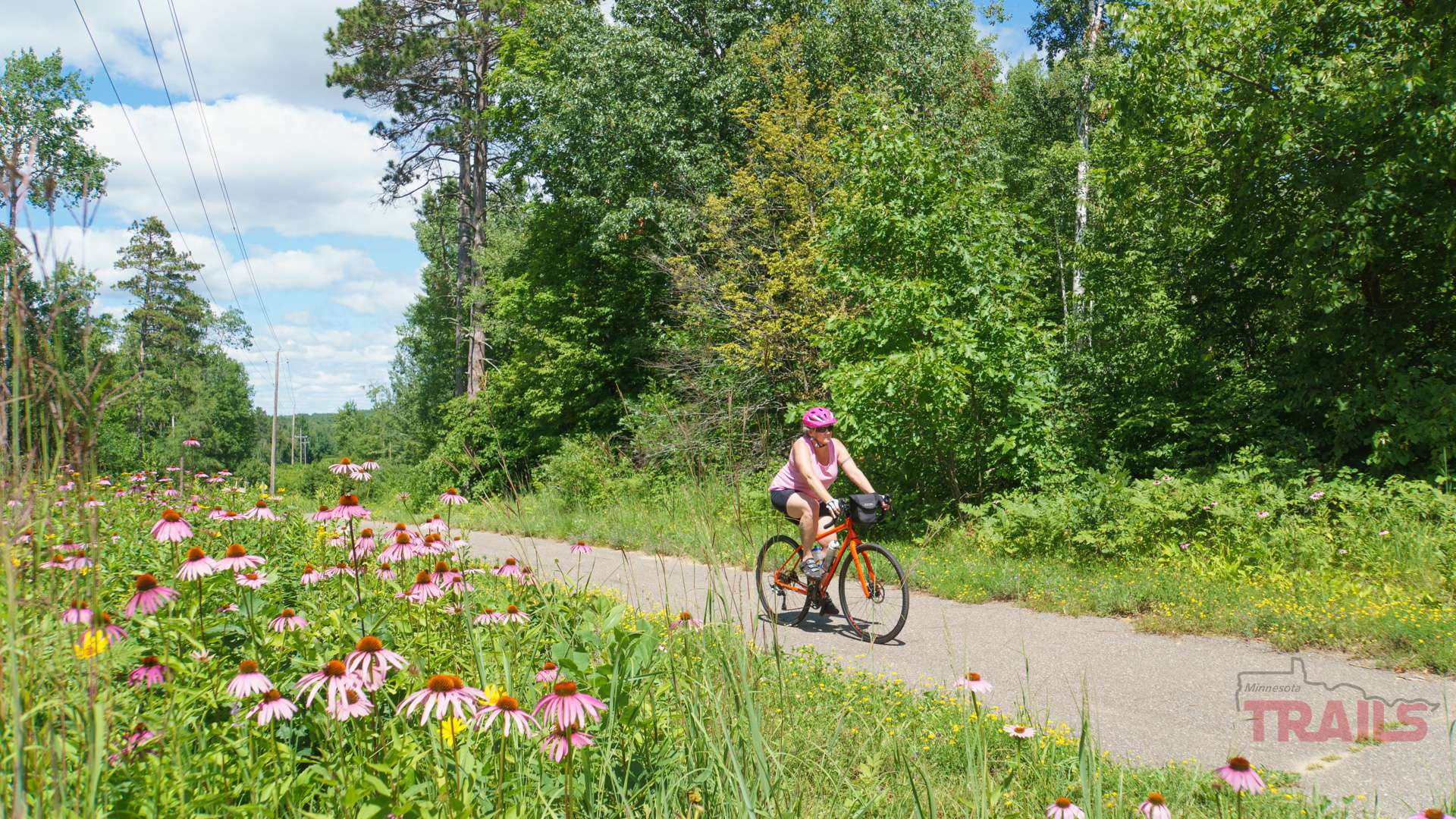 The downside of most recreational trails is that they’re linear. They may be scenic and beautiful, but they connect two end points and to get back to the beginning you’ll have to ride back, get a ride back, take roads or do a complicated, two-person car-stashing thing.

The Paul Bunyan and Heartland Trails offer an alternative here. The two trails officially joined about five miles north of Walker in 2006 to form a giant in Minnesota’s trail system. Together, the two trails offer about 165 miles of paved trail, connecting Brainerd, Park Rapids, Walker, Cass Lake, Bemidji and many other smaller communities with a roughly x-shaped route.

Look closely at the map and you’ll notice that they share about five miles of trail corridor between a parking lot at the intersection of Highway 34 and County Road 87 and the city of Walker. You’ll also see that the bottom two legs of the X are joined together by another trail. The Shingobee Connection Trail, completed in 2014, makes for a perfect 20-mile loop ride through Minnesota’s Northwoods and includes an eight-mile trek that dips and rolls through the Chippewa National Forest.
Pair this with a visit to the new Rendezvous Brewing taproom in Hackensack and you won’t be disappointed. 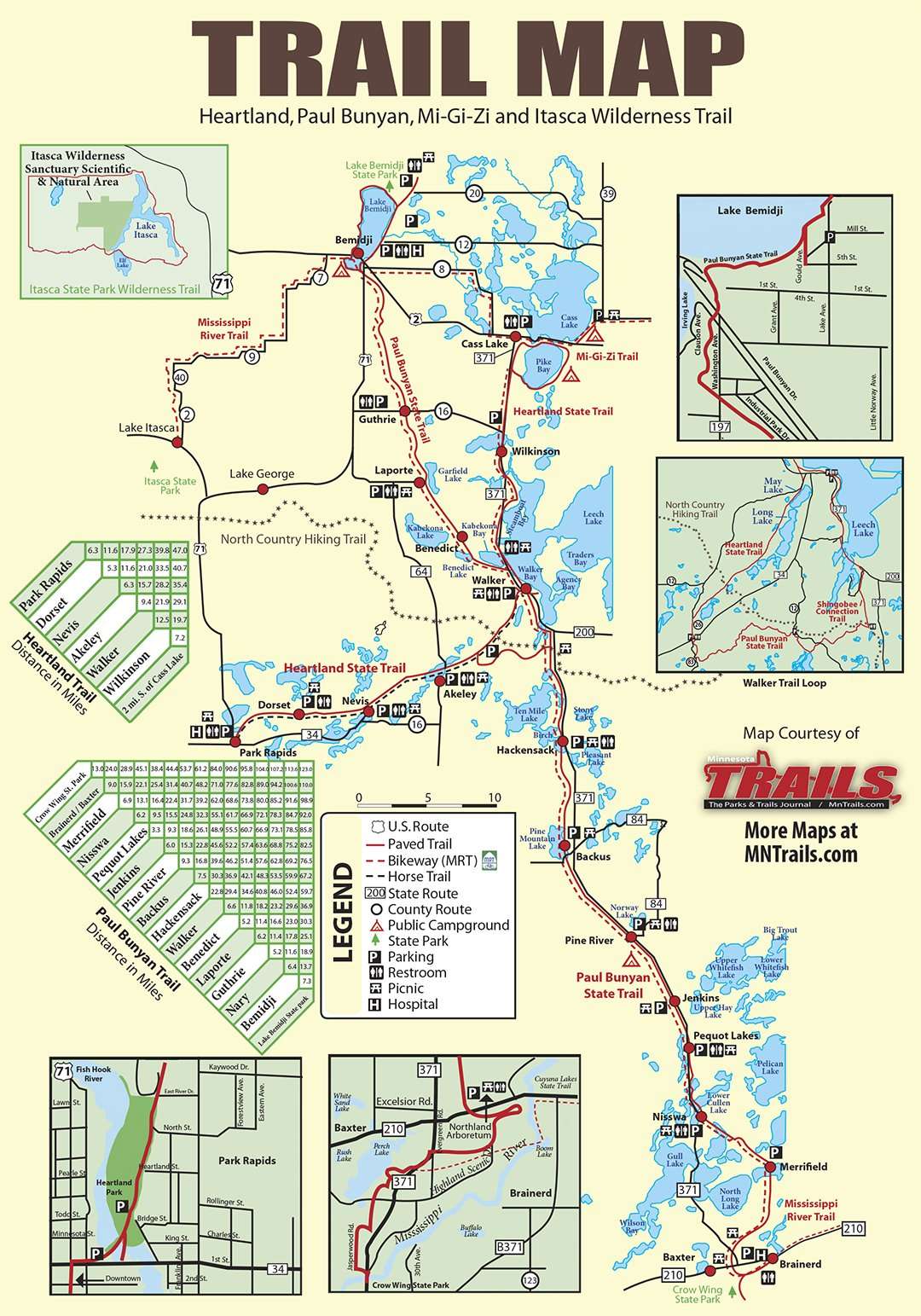 Jen and I left the above-mentioned parking lot at around 11am on a Sunday and made our way toward Walker. It was perfect bike-riding weather with low humidity, blue skies, sunshine and even a cool breeze. What made it even better was that the trail toward Walker was going downhill, or so it seemed. Our memory of this part of the route was a bit foggy. The last time we had ridden it was in June of 2014 when we biked from Big Lake to Bemidji on Nice Ride bikes as part of a group that officially brought the bike share program up north.

We made it to Walker in no time and turned right to head downtown at the intersection where the two trails split again. The Shingobee Connection Trail route through Walker took us on a signed bike route past Chase on the Lake Hotel and Walker’s city park. Then came a combination of trail and road, a quick crossing of Highway 200 and the rest was all paved trail. It crossed the isthmus between Walker Bay and Shingobee Bay on the southwestern end of Leech Lake and veered off into the woods and away from the highway.

The next couple of miles were hilly and very scenic and we eventually reached an intersection where the Shingobee Connection Trail joined the Paul Bunyan Trail. If we had followed the trail straight ahead we would have ended up in Hackensack after about seven miles. Since we were on a schedule with a two-hour drive home, we turned right onto the eight-mile rollercoaster ride through the Chippewa National Forest.

The first time Jen and I rode this section was on our very first bikepacking trip in 2007. Back then, the eight percent grade warnings had us concerned since we had never attempted that much climbing on a bike, especially loaded with homemade canvas panniers on retrofitted mountain bikes. I do remember the feeling when I huffed up my first hill. The triple chainring came in very handy that day and the hills I had feared turned out to be no problem. I was too busy taking in the scenery, which was just fantastic and it truly was a formative biking experience for both of us. Knowing that we had biked 100 miles from home and explored these trails under our own power made us incredibly proud and cemented in our love for biking.

This section of the Paul Bunyan Trail is completely different from the rest of the straight rail trail. It climbs, drops and snakes through some very beautiful, forested stretches with some great, scenic views of the Chippewa National Forest. We stopped at an overlook on what looked like the highest point of the trail and took in the scenery. Somewhere down in that valley were the North Country Trail and the Shingobee River. Anway Lake sparkled in the sunshine off in the distance.

Back on the trail, we cruised through the woods the rest of the way and enjoyed the purple coneflowers and countless other wildflowers (my go to guy for plant ID is the Distracted Naturalist) along the trail. After one last climb, we were back at the parking lot, packed up and headed home via Hackensack. 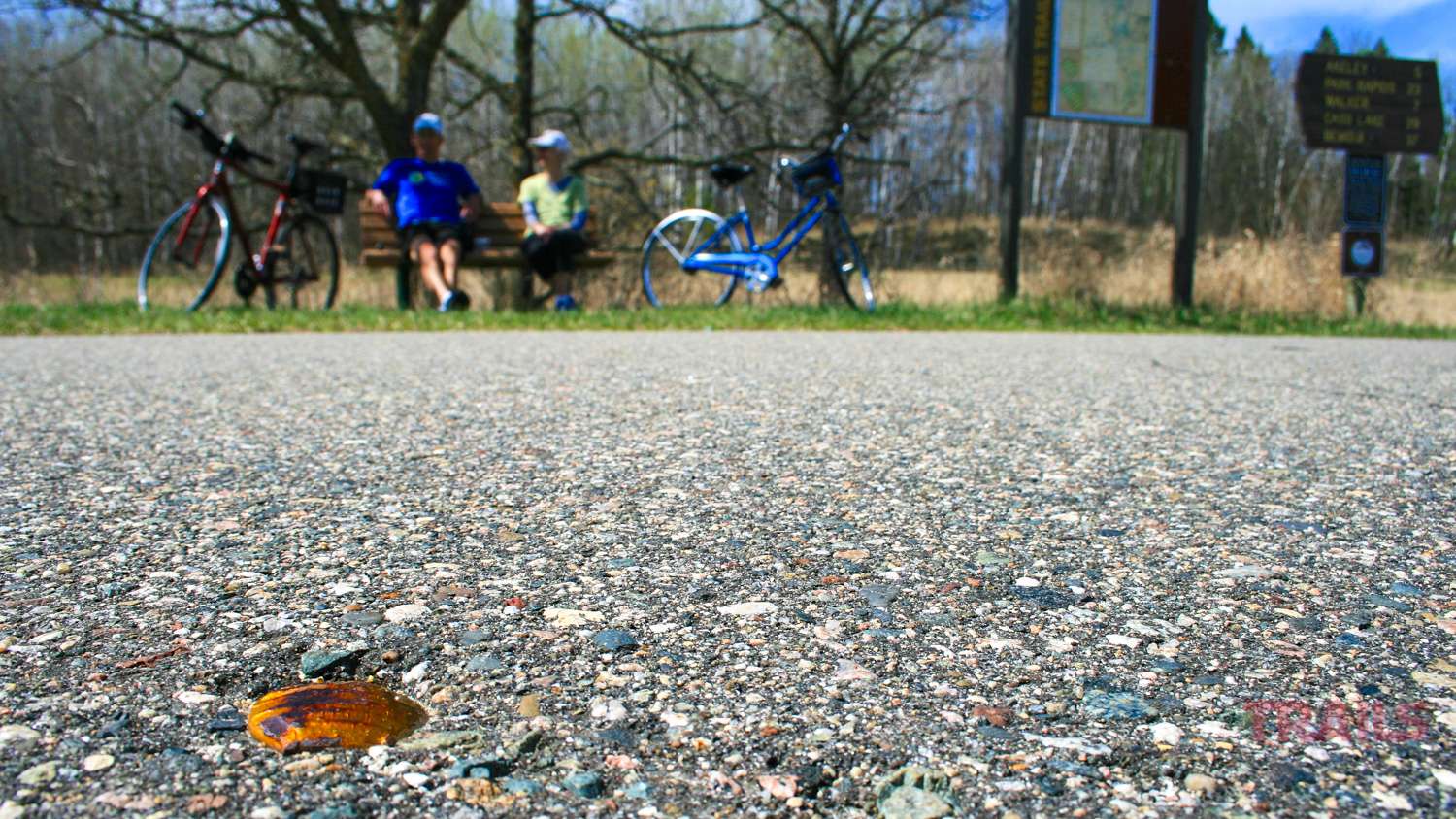 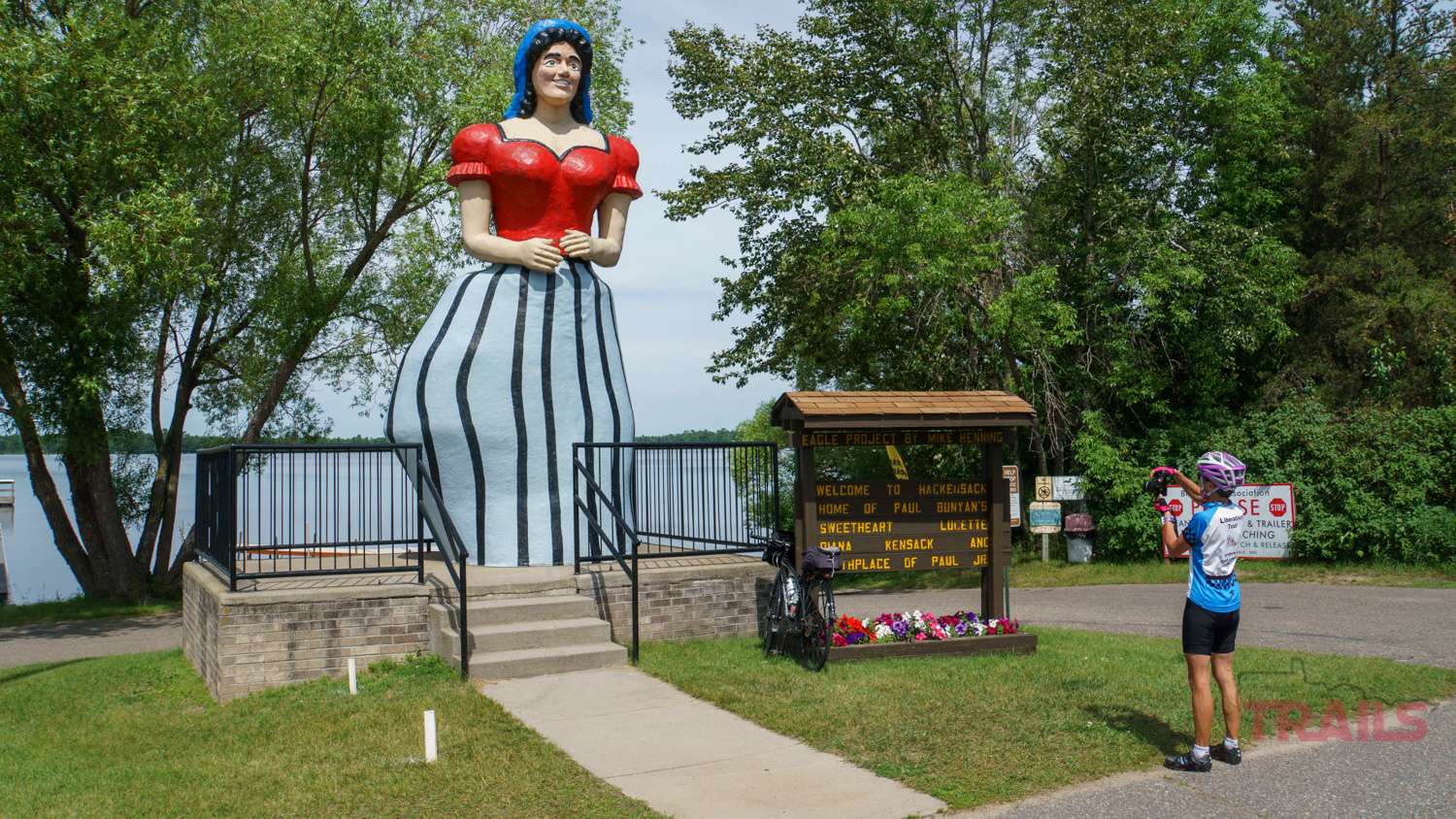 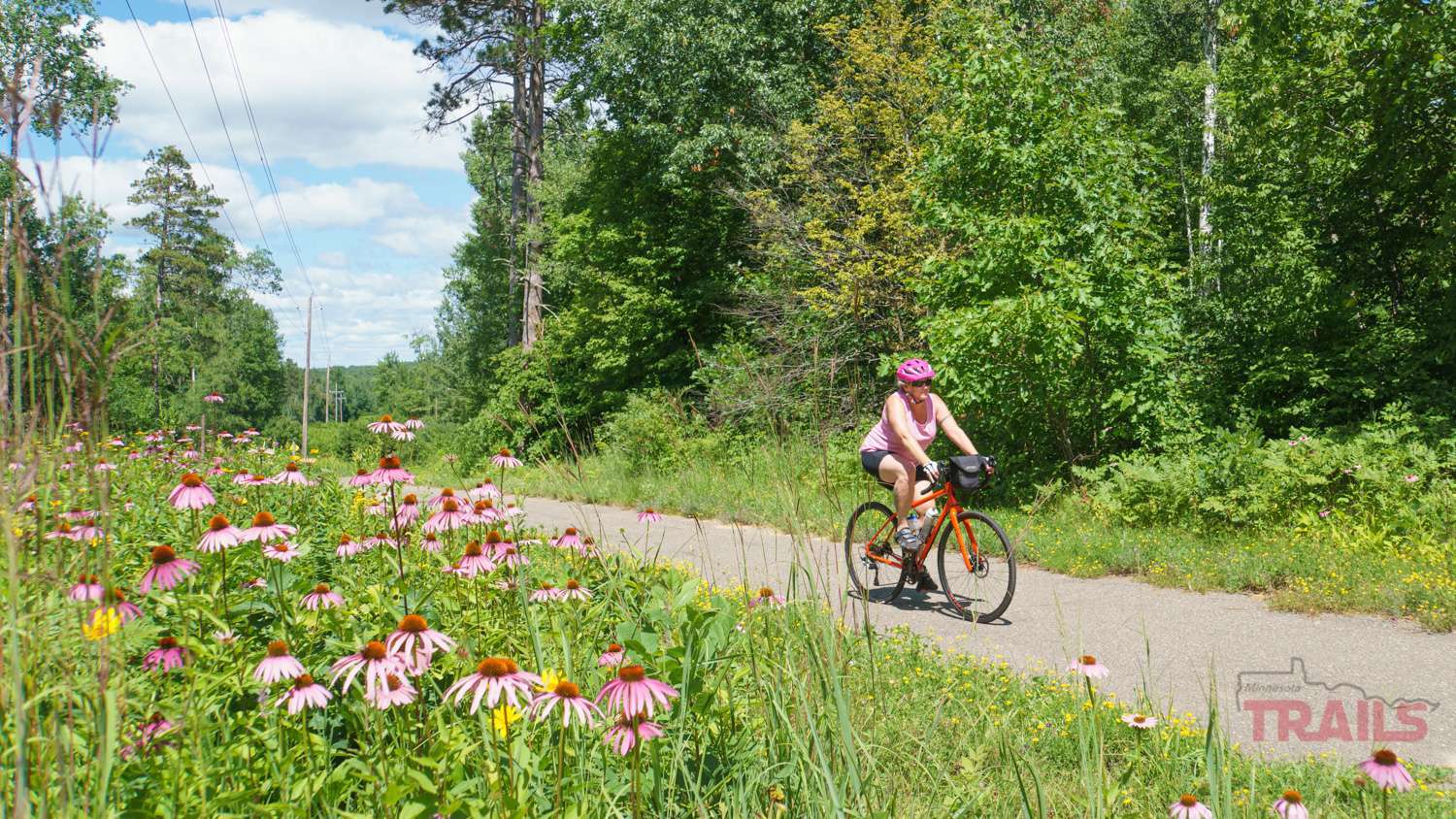 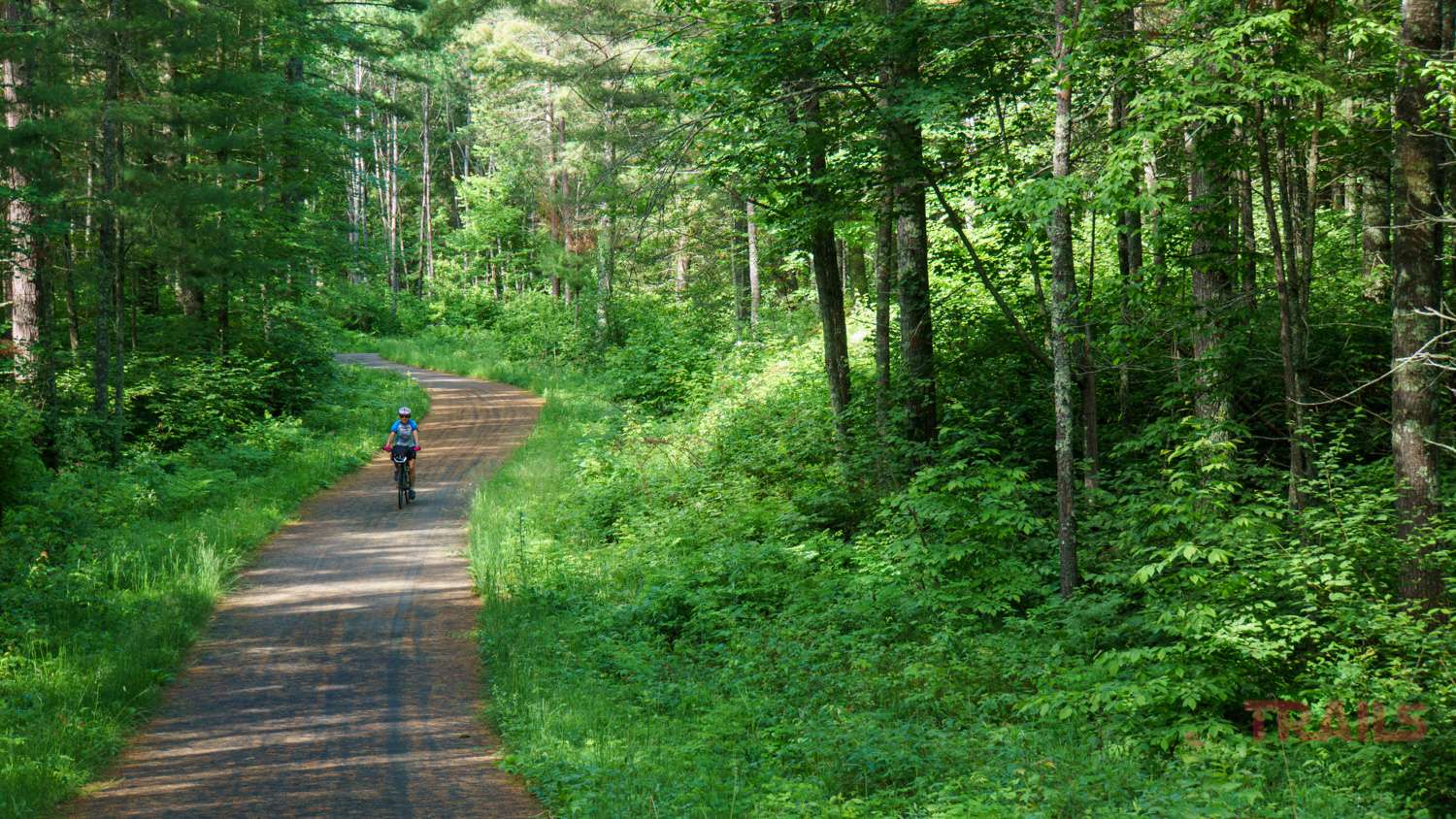 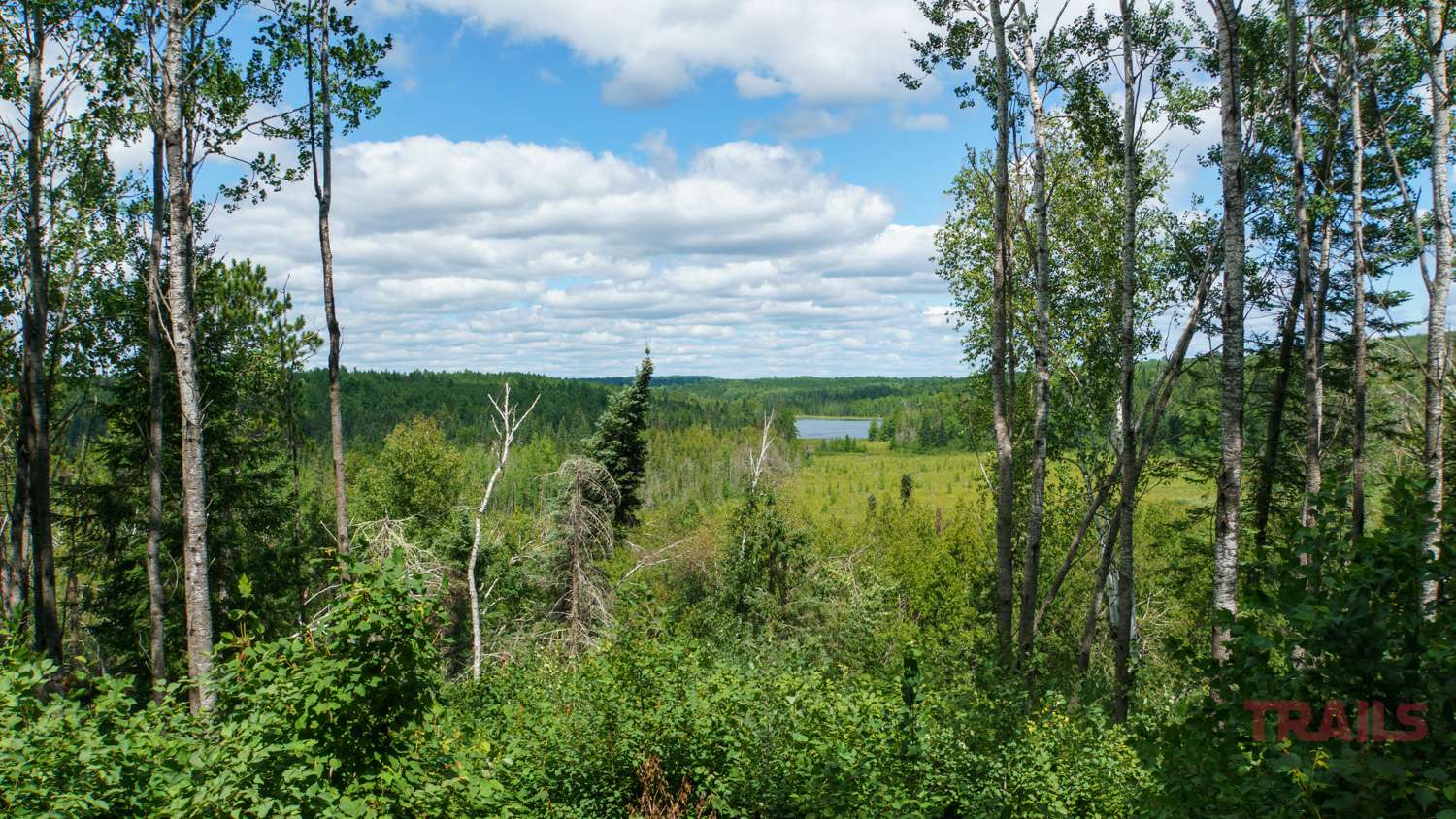 Rendezvous Brewing is the newest kid on the Paul Bunyan block. So new, in fact, that their Grand Opening had happened the day before our visit. The brewery and taproom are housed in a grey, log sided building with a green metal awning on First Street South. A few guests were enjoying their beers and the view of Birch Lake from their picnic tables in front of the building. Paul Bunyan’s girlfriend, Lucette, was keeping an eye on the scene from her perch at the boat landing. It was a quiet day in town and there was a table with our name on it.

Sue and Doug Toth opened Rendezvous in July of 2020. Like so many, Doug started out homebrewing and eventually made the decision to turn his hobby into an occupation. Sue’s grandparents used to own the Rendezvous Restaurant in Hackensack, so picking a name for the brewery was easy. “Rumor has it, they brewed their own beer.  Hence, our first beer, Chapter One, is fashioned after an old-time recipe they might have brewed.” Sue said.

The 1907 building once housed a Model T showroom and has seen various tenants over the years, including a general store and a furniture dealer. Antique photos inside the taproom tell the story. After two years of planning, permitting and remodeling, the Toths started brewing on their 5bbl system made by Stout Tanks and Kettles and so far their four fermenters have been supplying a steady flow of beer.

The COVID-19 epidemic meant delays with the delivery and install of equipment, but the new brewery was well received by locals in this town of 300. “The city has been great to work with and was very welcoming to a new business.” Sue said.

It’s too soon to make big plans for the future, but the Toths hope that visitor numbers to the taproom will increase once the mask mandate expires. “The biggest problem is that we haven’t been able to have games and events. That’ll have to wait.” Sue said. Overall, she said, the taproom journey has been a great experience. “It’s funny how everyone knows our names now and greets us like old friends.” she said. 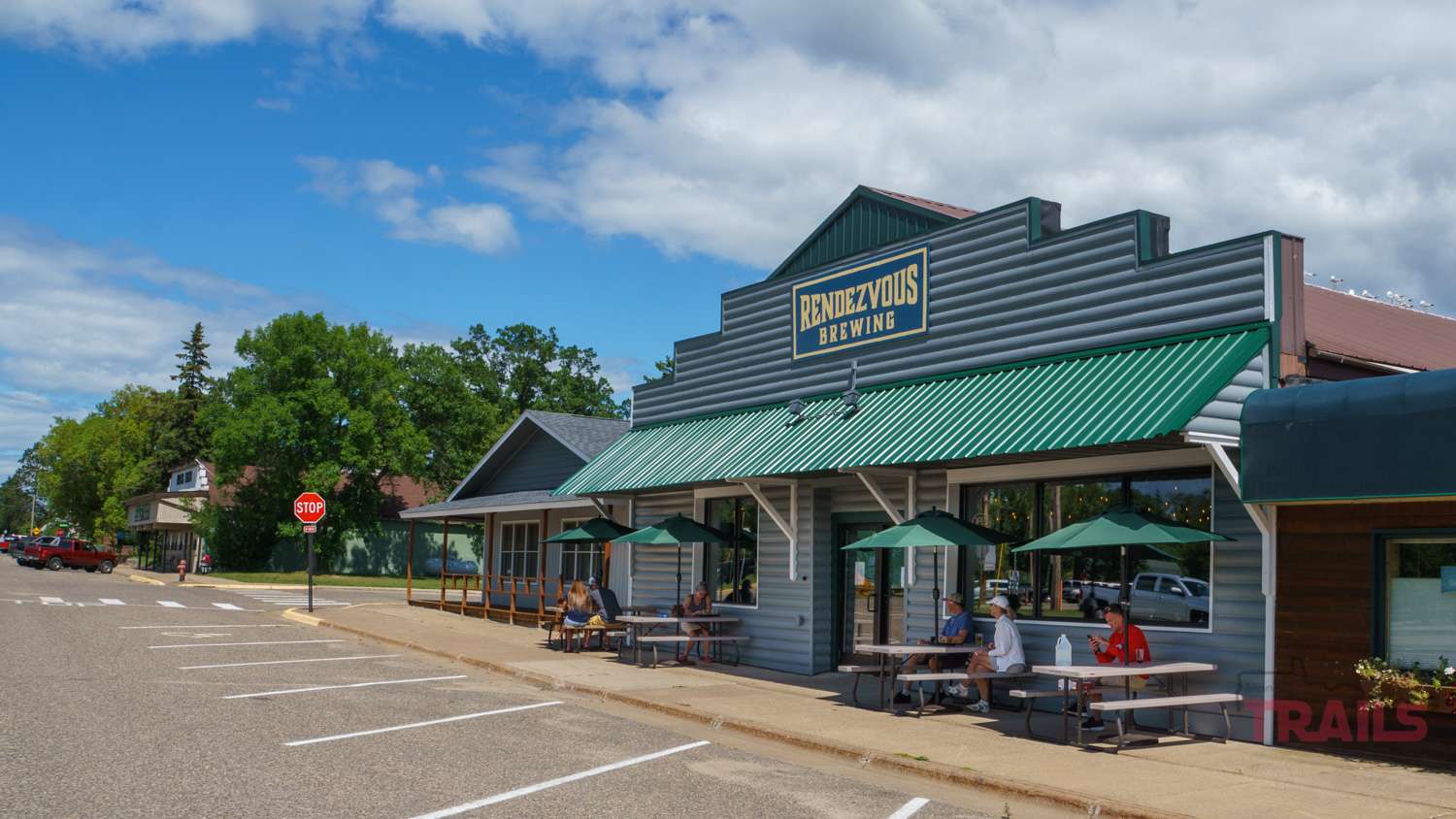 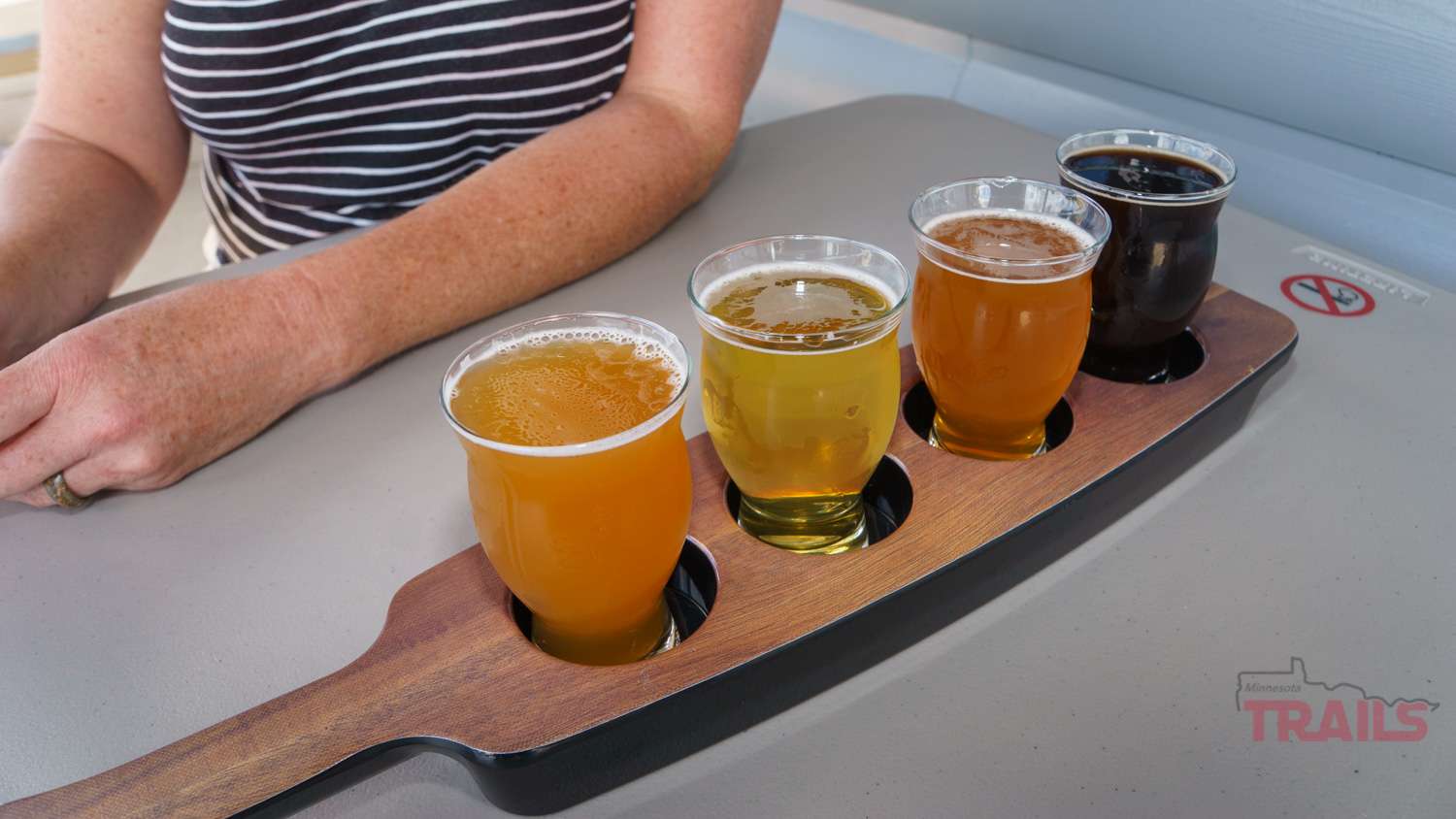 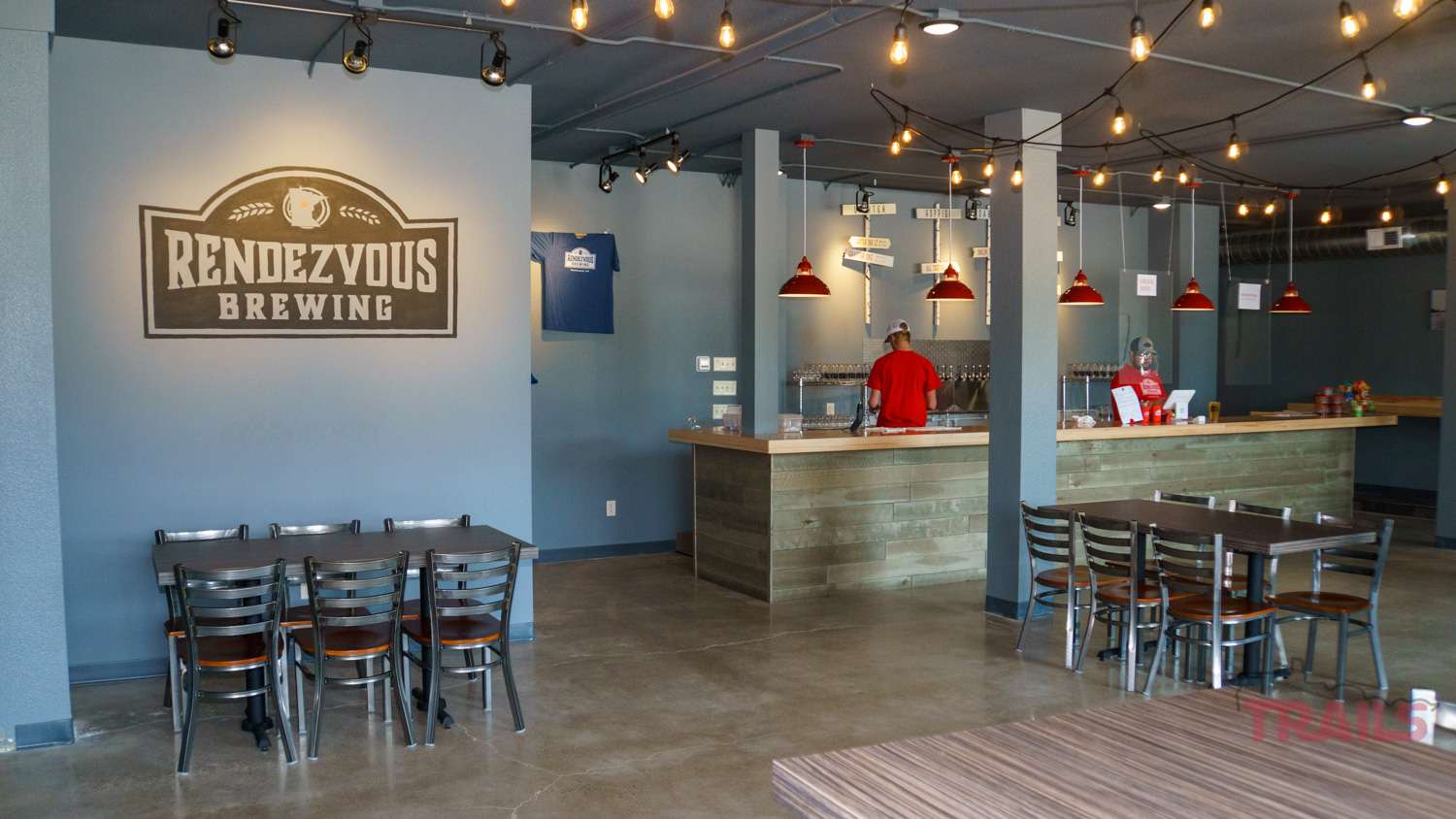 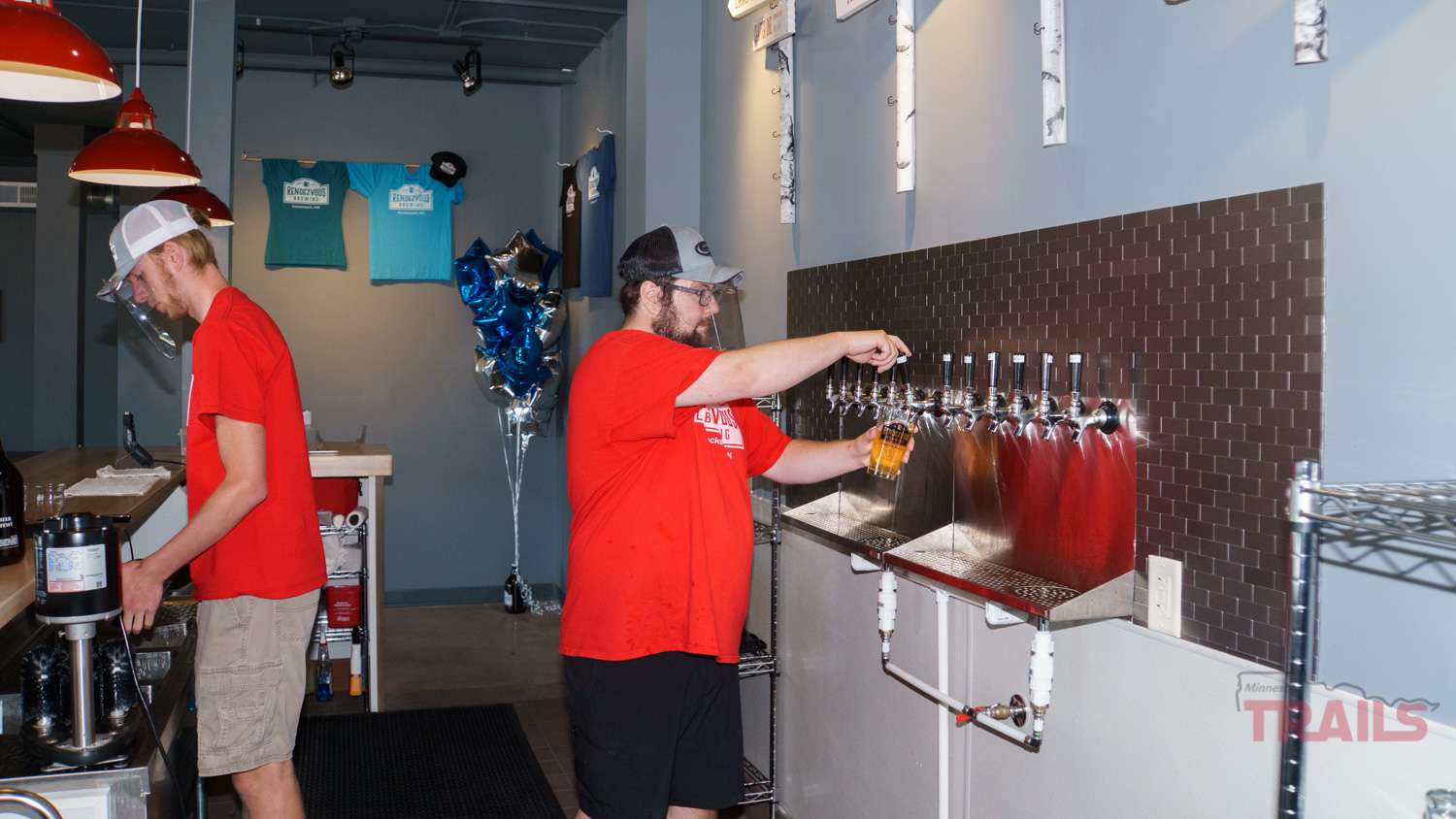 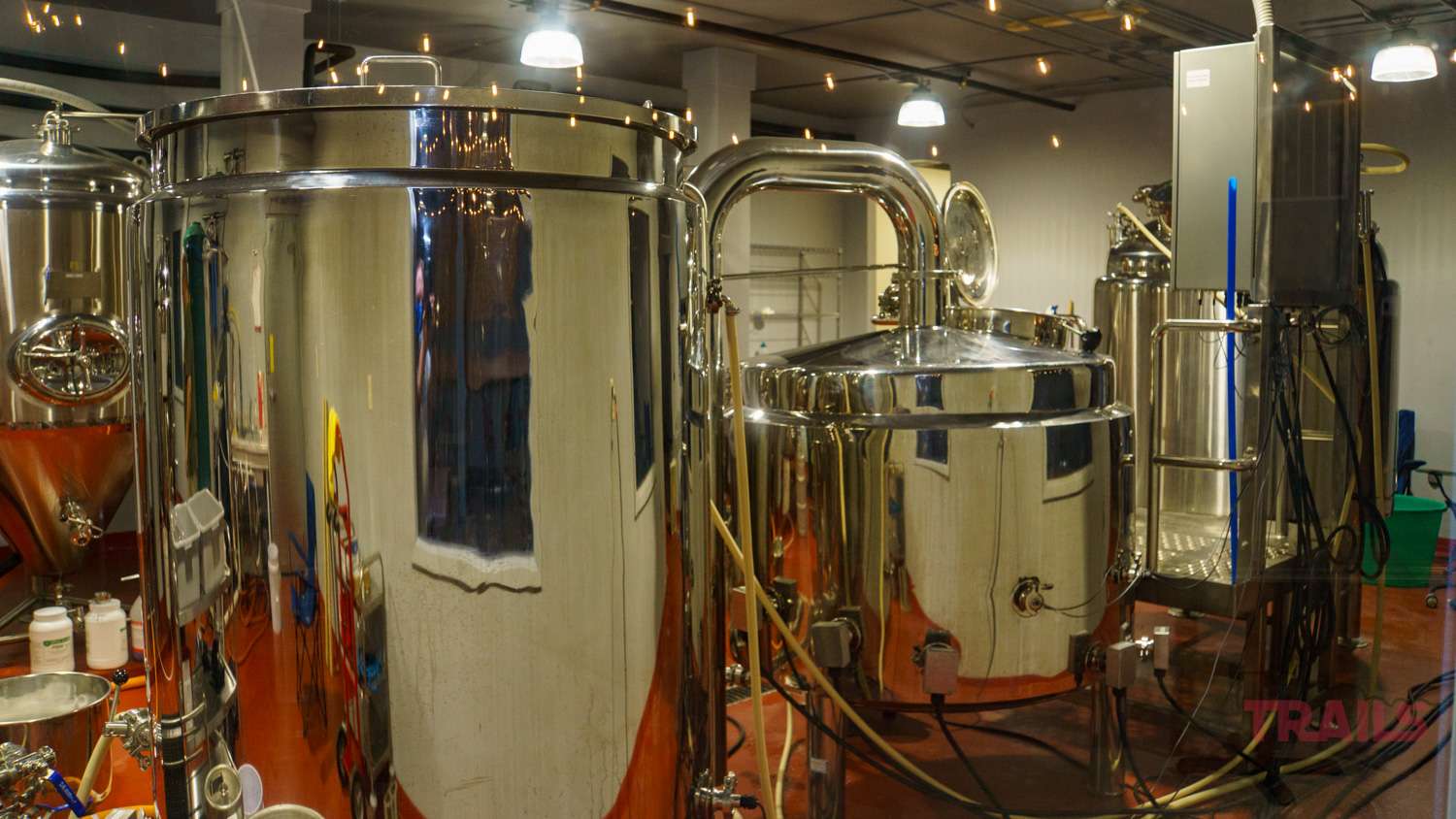 Jen and I masked up and stepped inside the taproom to order. We were greeted by a simple, clean interior with polished concrete floors and slate blue walls. The bar and taps were on the far side of the room surrounded by (sadly) empty tables.

The beer menu was simple. There was what the Toths call an HPA, Hackensack Pale Ale (Chapter One) in both a regular and a light version, a cloudy New England IPA (All Together), a dry Irish Stout (Smilin’ Eyes) and a Cream Ale (Sunny Dream)

We ordered the flight and got to work, if you can call sitting outside in the shade on a sunny day and sipping beer while looking at the lake work. After trying them all, my second choice was the surprisingly dry stout, which I’ll definitely revisit in the winter. But for me Chapter One was the perfect beer to top off this day of riding and exploring. It went down easy, kinda like the gentle downhill and seemingly constant tailwind we had all day. And at 5.2% ABV and 24 IBU, it fit the bill for a Sunday afternoon. It was, after all, a school night. (The light version drops it to 3.5% ABV and 15 IBU).

If you wanted to ride right from the brewery and follow our route, you’ll turn the loop into a lollipop and add about 14 miles to our 20-mile route. Don’t forget to stop at Portage Brewing Co. in as you’re passing through Walker. Unfortunately, we didn’t have time for the long version, but that means we’ll have to come back.

This orienteering-style race is held annually at Lake Bronson State Park. Grab a GPS and a friend and head to northwestern Minnesota.