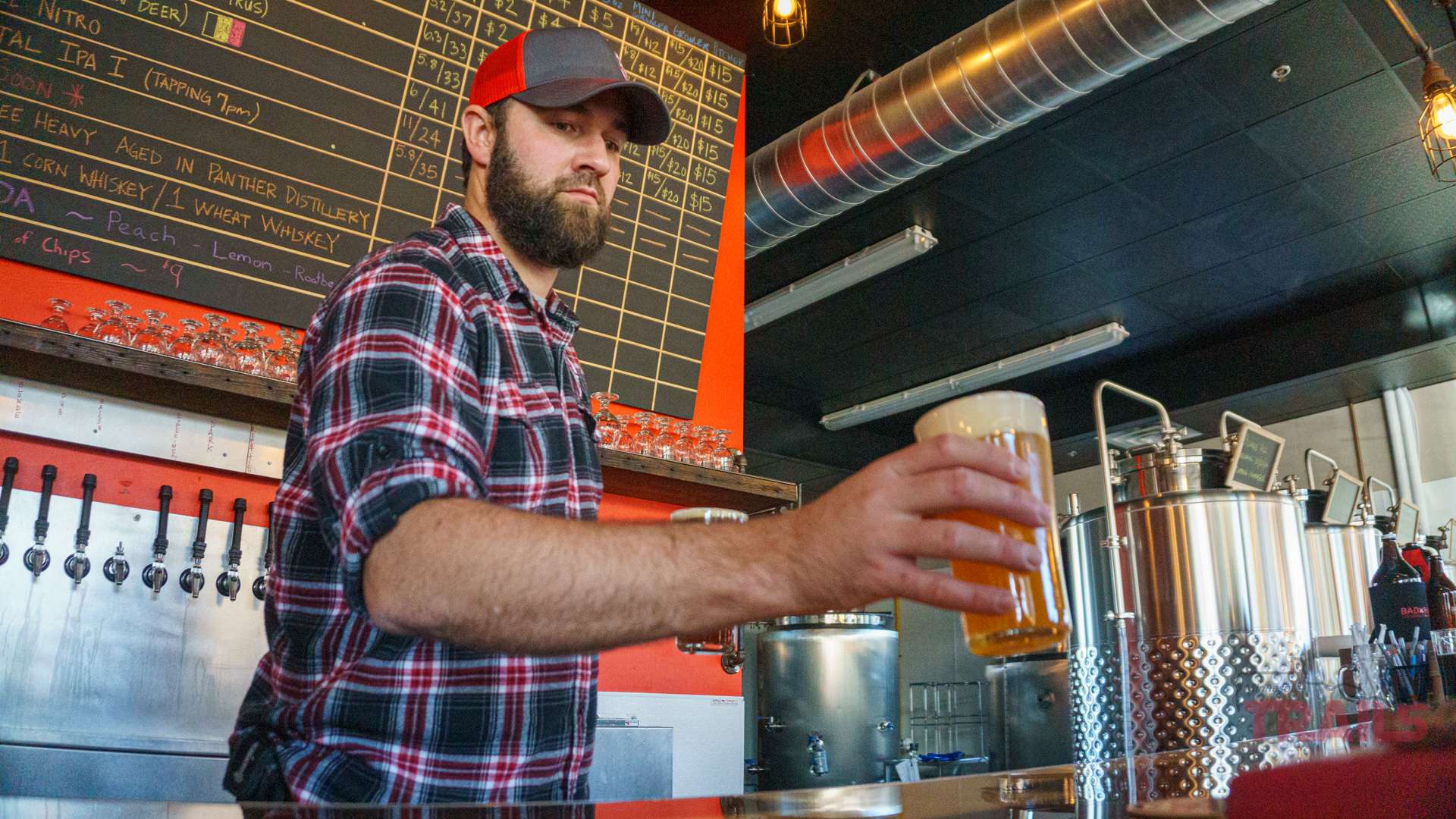 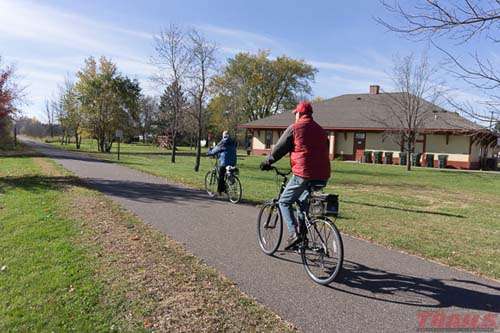 Saint Joseph is the eastern terminus of the Lake Wobegon Trail, so you have lots of options for a bike ride. It continues west for 42 miles from Saint Joseph through Avon, Albany, Freeport, Melrose, Sauk Centre and West Union through Minnesota’s dairy country. Every seven to nine miles another church steeple and water tower tell you the next town is not far away. If you’re really ambitious, you can ride another 55 miles to Fergus Falls, because the Lake Wobegon Trail connects to the Central Lakes Trail at the county line between Sauk Centre and Osakis. (Two brewpubs on the Central Lakes Trail, but that’s another blog post)

In Albany, a spur to the north goes through Holdingford and connects to the paved Soo Line Trail to Bowlus and beyond. 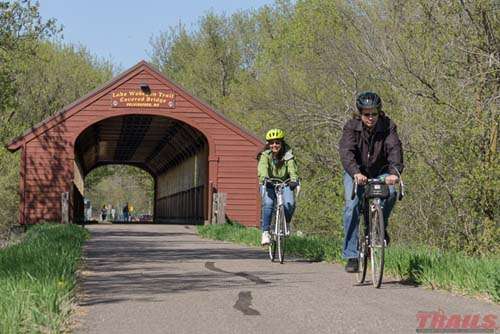 The covered bridge in Holdingford

I started my trip in Bowlus at the trailhead that was built to resemble the old train station and headed for Holdingford. As soon as I left town, a tunnel of trees, which made for a nice, shady ride, swallowed me up. The trail crossed Two Rivers River several times on old railroad trestle bridges and popped out into the open here and there. There’s sparse development on this section of the route, just some farms and cows, very pastoral.

Holdingford’s highlight is the covered bridge, a relatively new addition to the town, which was once a hotbed for bootlegging. I zipped through Albany after turning east and continued on another very nice tree-covered stretch to Avon, where I got a bird’s eye view of the trailhead from the top of the observation tower. It was built to represent a water-filling station. These were once essential to train travel because steam trains needed to fill up their tanks on a regular basis. 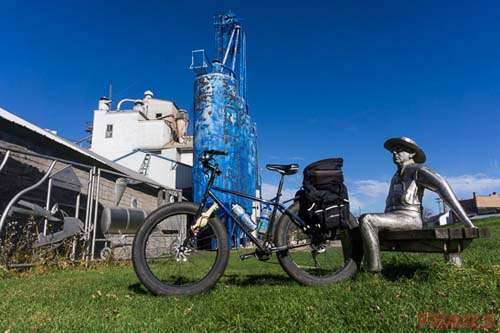 The tin man is part of a stainless steel sculpture about the history of Holdingford. Bike not included

The last nine miles to Saint Joseph started out wooded, but soon the tree cover went away and I rode through farm fields and past swampy areas in the open. Just before I got to Saint Joseph I passed by the old Collegeville station, now a private residence. A marker tells the history of the area and if you look carefully, there are remnants of the old tracks in the grass.

Just before the Saint Joseph trailhead, at County Road 3, I took a connecting spur south to W Minnesota Street and rode the shoulder to Bad Habit Brewing for another half mile. After a total of 35 miles I felt I deserved a beer. 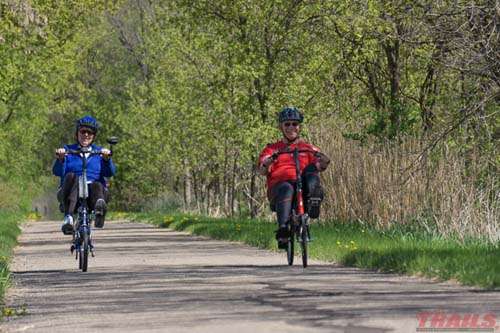 Biking under the trees near Avon 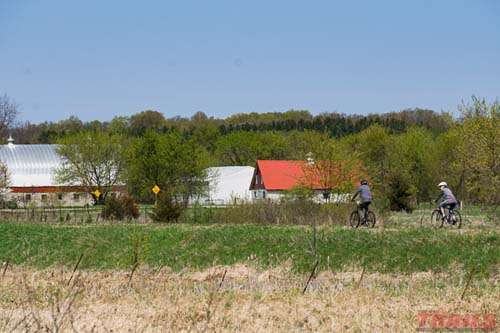 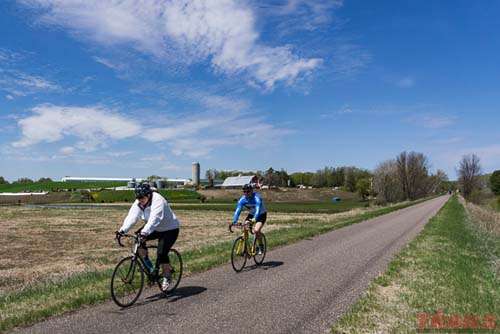 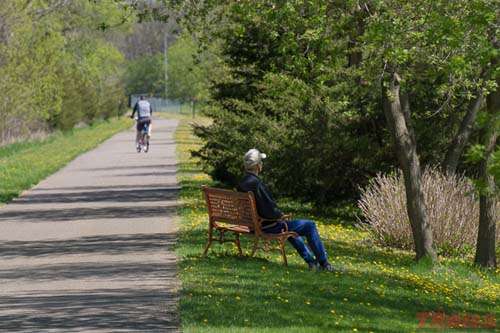 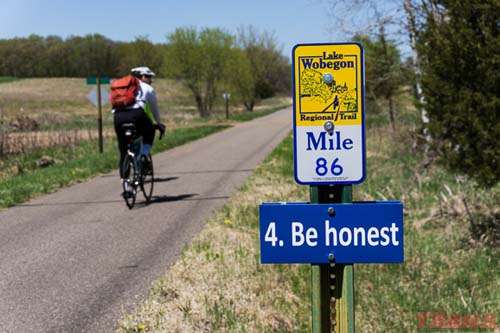 Sounds of Clapton, Springsteen and Billy Joel greeted me through the open garage doors as I rode up. It was a warm afternoon and people were lounging on the patio, sipping on beers. Inside, light and dark striped wood tops, banded in stainless steel, made the place look cozy and modern at the same time. A window wall let in the warm afternoon sun and illuminated the beer menu behind the bar like a message: “You have arrived.” 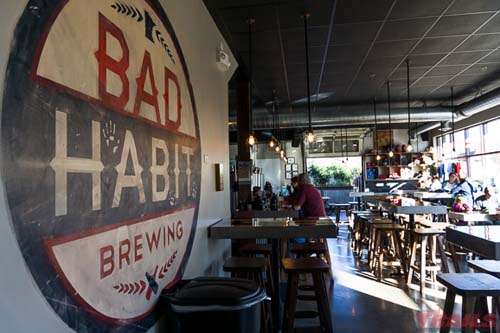 “We can’t always brew the beers that just we like to drink”, said Aaron Rieland, one of the founders and owners of Bad Habit Brewing when asked how they come up with ideas for new beers. “We see what’s popular in the market, what’s trending, what other breweries are doing, but we also have to make beers that sell”. 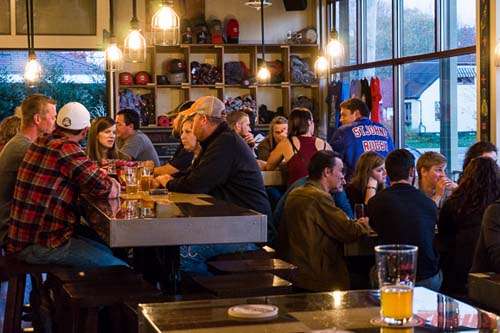 That still leaves room for brewers Eric Geier and Erik Salmi to crank out regular experimental batches like Blueberry Wheat, Jalapeno Blonde or a Scottish Wee Heavy, aged in whiskey barrels from Panther Distillery in Osakis (hint: You can take the trail there, it’s only 47 miles).

The idea that craft beer makes people include breweries in their travel plans is not a new one and there was evidence for it that night.

Ed Clark and Trang Nguyen from St. Paul are self-confessed hopheads and visit about 50 breweries a year. “We’re on a mission to collect a growler from each brewery in Minnesota and so far we’re on growler number 66”, Clark said. Their favorite: Habitual IPA.

Jen Kramer from St. Joseph had brought her friend Mark from Rush City to Bad Habit. Both like to go to craft beer festivals and visit tap rooms regularly.

“We like to come here because we like the atmosphere and the beer is really good”, Mark said. 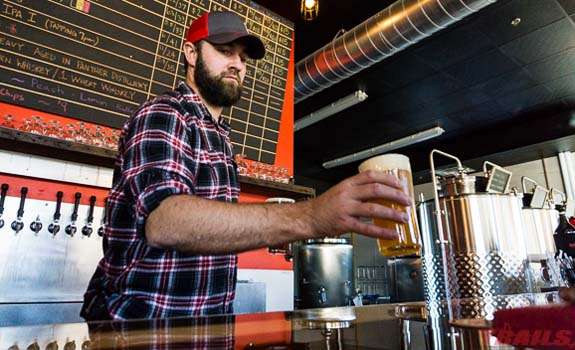 Aaron Rieland serves up a pint

Kaye Demel and Darrin Jorschumb from nearby Avon are happy Bad Habit is close by. “We’re both into craft beers a lot and this is a great place to be if you don’t like to go to bars”, Kaye said. “If we go someplace new, we like to check out the local brewery”. Her favorite was the Blonde Ale. “It has no aftertaste, but still a lot of flavor.”

“This community has been so good to us and we have really liked getting to know our neighbors and meet lots of new friends”, he said.

Bad Habit’s future plans include offering crowlers, expanding their summer hours and increasing the production of their 5bbl system from 350 to 400 bbl. 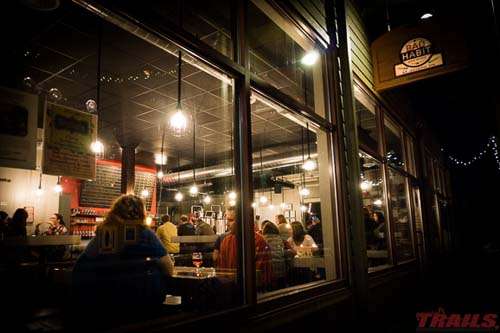 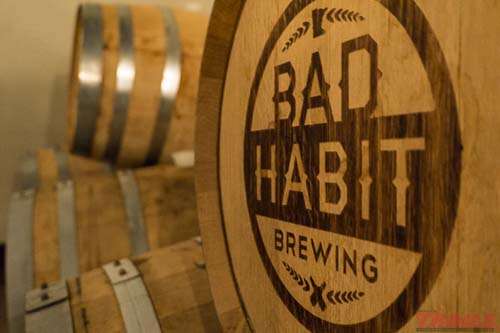 After a 35-mile ride I really enjoyed the Repetition Pale Ale, because it was very quaffable (a new word I learned) with its 5.5 ABV and 33 IBU.

I also quaffed a Rye Saison with slightly more heft in both departments, meaning 6ABV and 41IBU. There’s just something about a saison that says ‘Drink me after a long ride’. 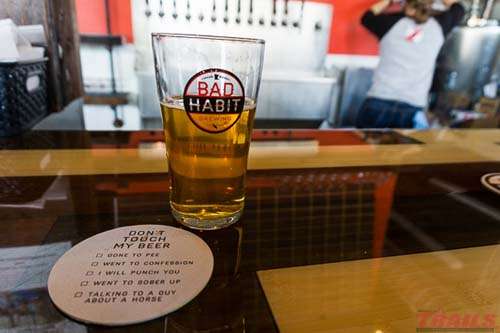