Update: Black Ship Cycles ceased operations in 2020, but you can still reach out to them on Facebook.

“I feel inspired in an industrial space like this” said Joe Bridge as we walked through the unlit hallways of the former soft drink bottling plant in Minneapolis’ Longfellow neighborhood. High windows let in enough daylight for us to find our way heavy racks filled with machine parts and decommissioned equipment. Years ago, bottles of Canada Dry whirred around stainless steel conveyors here, but today the space is used for storage and subdivided into small studios.

Joe flipped a light switch and we turned a corner. Down a corridor with plywood walls we arrived at a padlocked door with a stack of business cards clipped to it: Black Ship Cycles. This was where Joe has been making custom steel bicycles and bike trailers from scratch since 2013. 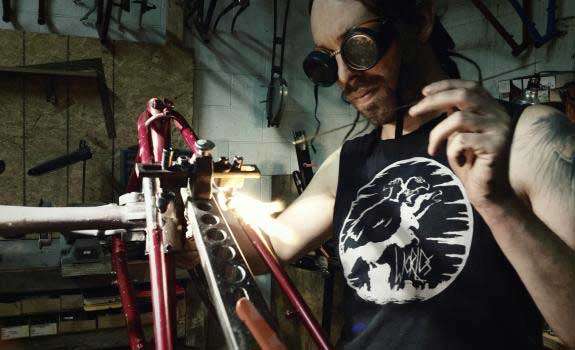 Behind the door was a small shop with workbenches full of files, hammers and ratchets sharing a space with a drill press, band saw and other power tools. The walls were lined with bike wheels, frames and forks. Some parts were from old bikes, some new; some were painted, and some dull with a grey patina from welding.

“Steel is long-lasting and forgiving,” Joe said. “It gives the artist and craftsman room to work with.”
His first bike, the Maiden Voyage (complete with Iron Maiden font decals) was leaning against a workbench.

“Pick it up,” he said. “It’s lighter than you think.” It was. The round tubes felt delicate in my hands and I immediately wanted to hop on and take it for a spin. Even the Icebreaker, Black Ship’s prototype winter commuter with its beefier, teardrop-shaped tubing, wasn’t what I would call heavy. “And you can repair a broken frame.” he said. 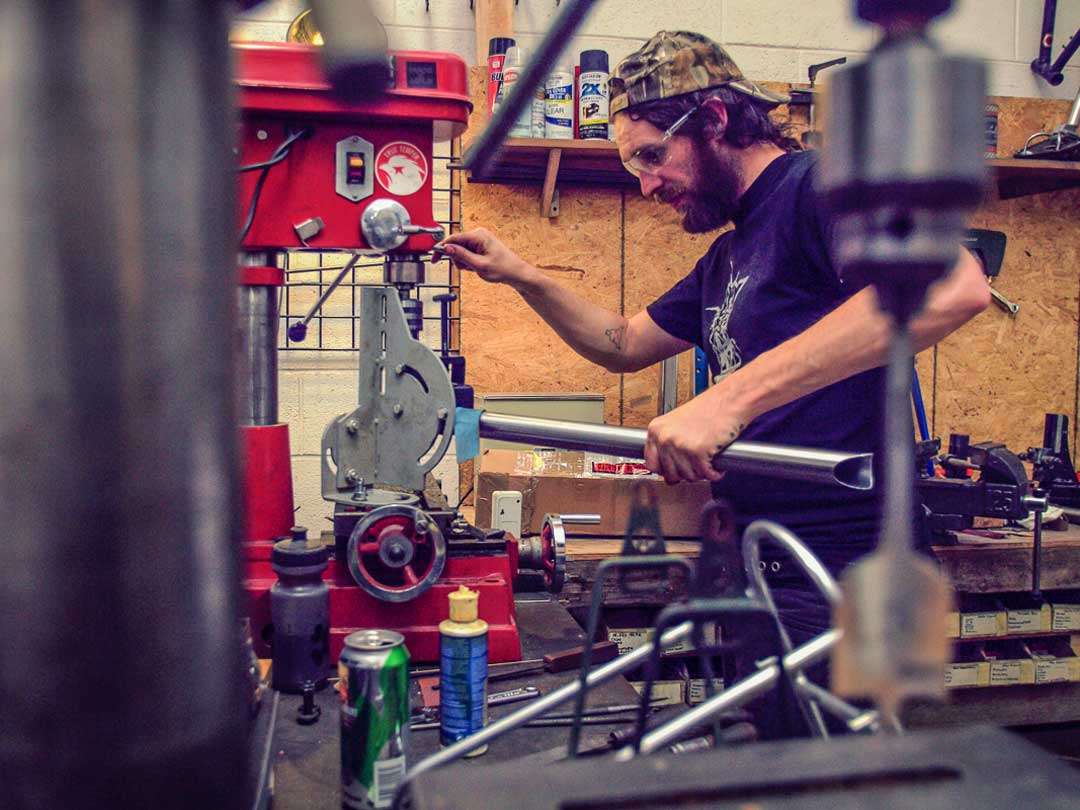 Joe had been repairing bikes and welding broken frames for a while and decided to take a bike-building course at the United Bicycle Institute (UBI) in Oregon where he honed his TIG welding skills under instructor Paul Sadoff.

He says his building style focuses on the bike commuter, the adventurer and the touring cyclist as well as the gravel and cyclocross rider. He is especially interested in making commuter and cargo bikes because “Bicycles have a utilitarian side and they help you drive less. The less we drive, the more we can make the world a better place for everyone.”

But Joe rides for fun, too. “I’m impressed with the trails in Minnesota. My favorite ride is down the Gateway and Brown’s Creek Trail for lunch in Stillwater.” And he takes his Icebreaker down the Minnesota River Trail and the mountain bike trails at Lebanon Hills and Theodore Wirth Park. The custom bike building process starts with a client interview. “I need to find out what kind of riding they want to do and what their budget is,” Joe said. At the interview he takes measurements like inseam and arm length and makes note of any special custom touches, like the dog leash loop he put on his own bike. The result is a set of blueprints for the client to review and approve. 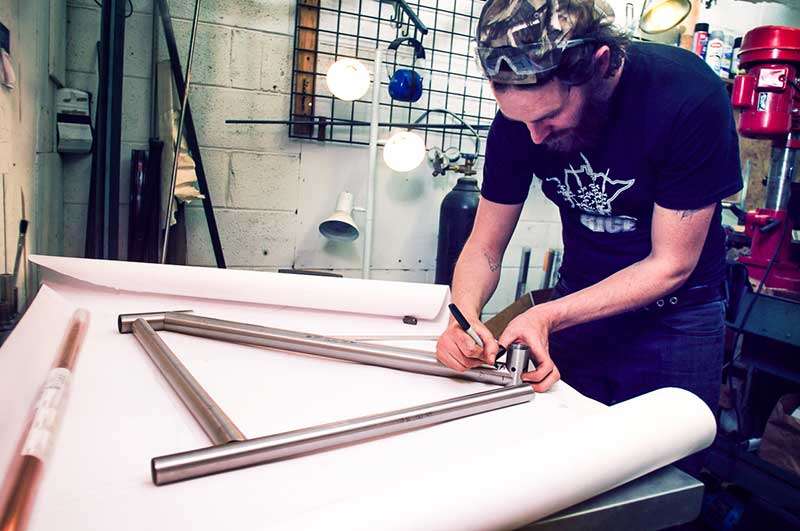 “My builds can range from a flashy road race or tour bike to a fast and light knobby bike to take out and get muddy every day, and anything in between.” he said.

The next step is production. First, the tubes are cut to length and mitered to fit together tightly. Joe pulled a box of steel tubes from a shelf. In it was a complete bike in parts sans welding. He arranged the pieces on a table and the familiar diamond shape of a bike frame started to appear. Then, the frame parts are clamped into a framing fixture, which holds them in place for spot welding. The frame comes out of the fixture and the welds are finished. “There’s a sequence to these things,” he explained. “You don’t want to heat up just one side of the frame. It’ll warp.”

Then, the dropouts (where the wheels attach) are inserted into the open ends of the frame tubing and welded in place. After a final alignment check on the precision table (a perfectly flat piece of milled granite, six inches thick) it’s time for finishing. 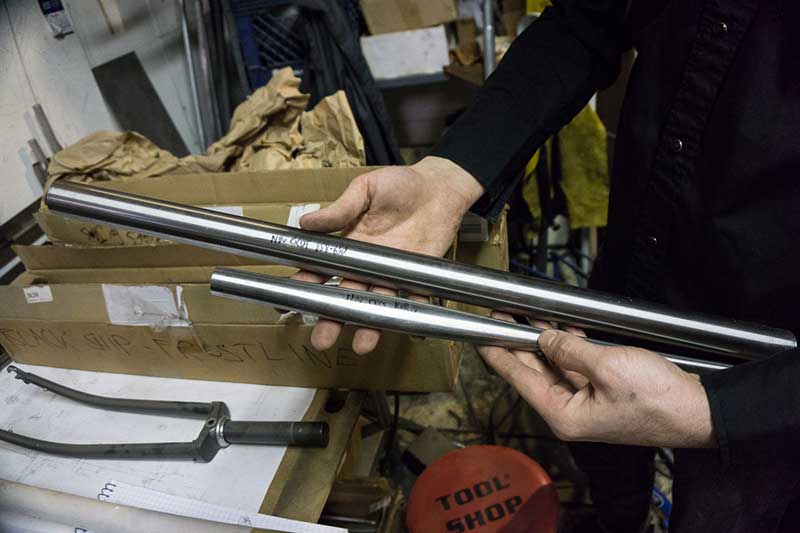 A bike in parts: Top tube and chainstay before mitering.

The raw frame is sandblasted and painted at AP Paints in Owatonna before the final assembly: That’s pressing in the bottom brackets, installing all parts, cables, wheels and, finally, the Black Ship Cycles head badge.

This sounds simple, but the building process takes time. From start to finish a bike may take 40 or more labor hours to make from scratch. Add in lead times for parts and you’ll take your first ride one to three months after the initial interview. 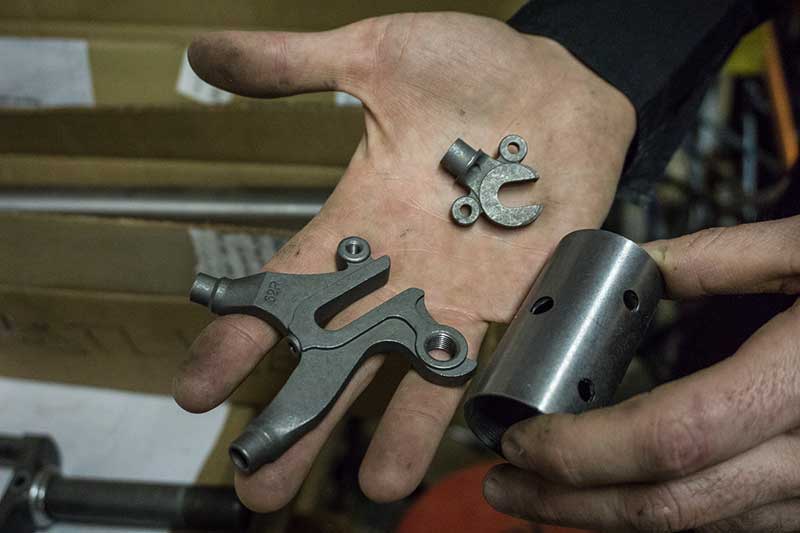 “Basically,” Joe said, “you order it the season before you want to ride it.”
Black Ship Cycles is a one-person show and Joe does everything from building to ordering parts and graphic design. In the near future he hopes to partner with a local bike shop and offer a small production run of stock frames in addition to his custom work.

Joe’s bio:
Joe is a Midwesterner who also grew up in Florida, and came to Minneapolis after working and living in various places. He helped build the Milwaukee Bike Collective and volunteered for the Bike!Bike! international community summit. After participating in a project that built and donated cargo bikes to nonprofit groups, Joe decided to fine tune his craftsmanship and learn the art of professional frame building. He has completed a course in frame design and building at the United Bicycle Institute (UBI) in Oregon and received a certificate in TIG welding from the American Welding Society (AWS). 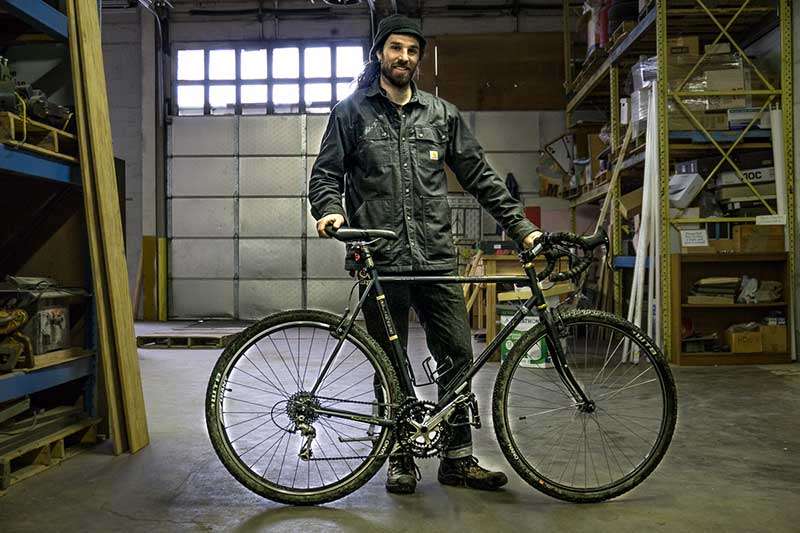 Glacial Lakes State Park preserves a landscape formed by glaciers, like no other in Minnesota.