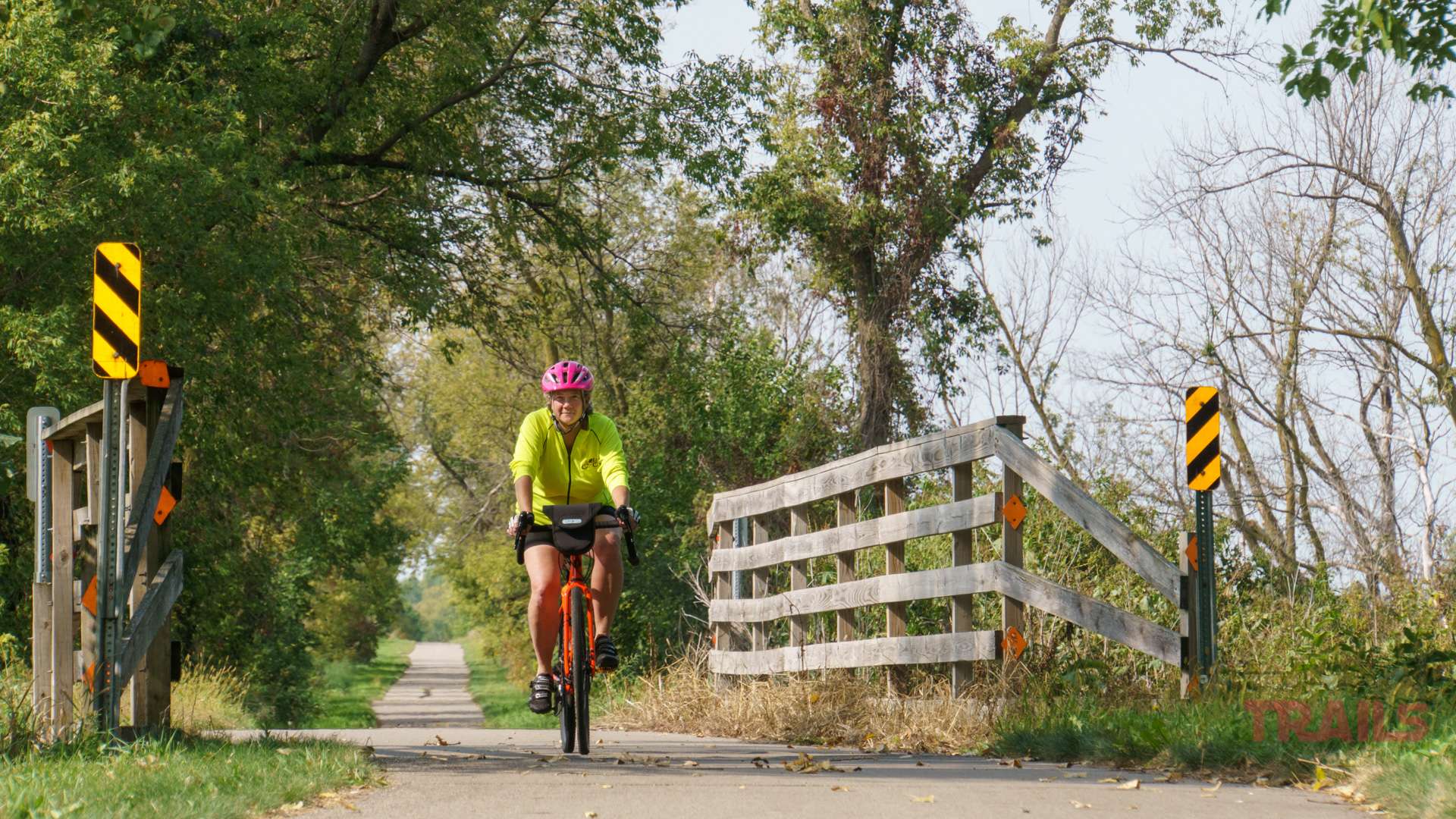 A Fall Ride on the Luce Line

The last time I visited 3BC Brewing in Hutchinson it was when I worked as a SAG wagon driver for Bike around Minnesota (BAM). It was a cracking hot August day and the beer and tacos were flowing. I fell in love with the beer selection and the fishing-themed interior and knew I needed to come back. With more moderate temperatures forecast it was time to pair a pint at the taproom with a ride on the Luce Line State Trail this September.

The Luce Line runs between Plymouth and Cosmos from east to west on a variety of surfaces ranging from mowed grass to pavement to limestone. More about the trail here. For our purposes, we chose to ride from Hutchinson to Winsted and back. From our awesome campsite at Masonic West Campground, it was a pretty easy 40-miler. It was technically still summer, but you could tell what was coming. Leaves on the trees along the trail had begun to dry out and drop, the corn in the fields was parched and rustling in the breeze and flocks of birds gathered overhead. It was cool and breezy, but it was nothing a light jacket couldn’t fix.

Jen and I enjoyed the ride immensely. It was a glorious early fall day and we got into chatting about our adventures, where we had been this year and where we wanted to go before the end of the season, how much we remembered about the trail from our last trip and where the lunch stop was. Like so many rail trails, the Luce Line had is share of old telegraph poles, which are always fascinating to me as they were the tech of the day 100 years ago and now just rot away. We passed through Silver Lake and continued on to Winsted. We were cruising right along somewhere between towns when we heard a rustling noise in the trees above. We had scared up some kind of bird of prey, which promptly dropped its payload, a dead squirrel, as it flew off. The carcass narrowly missed Jen’s head and landed on the trail right between us with a splat. That was a first. Between the two of us we’ve had standoffs with skunks and seen snapping turtles, wolves, bull snakes and moose on trails. We’ve been chased by sandhill cranes and nearly got creamed sideways by a turkey once, but never has a dead rodent been dropped on us. Ahh, Nature!

We got to Winsted and I’m happy to report that the final mile or so into town has been completed. Where the trail used to abruptly stop, it now takes a sharp 90-degree turn and weaves through a field by the airport into town. On the way to our lunch spot we biked past Hainlin Park and noticed a curious collection of sorts in a side street. Here, a couple dozen streetlights were installed along the road, but each one was different. I don’t know why they’re there, but it might have something to do with Millerbernd Manufacturing, a company that’s been in Winsted since 1933 and makes street light poles, among other things. That’s the beauty of traveling by bike. At 10 miles an hour you notice things like that. Crazi Cafe was our lunch stop, where we sat on the patio overlooking the lake.

Back outside, I struck up a conversation with Brent who was on his way to Piepenburg Park north of Hutchinson on a 60-mile bikepacking overnighter. We ended leapfrogging with him along the trail on the way back and rode the final eight miles or so together. He was happy to have someone to talk with toward the end of his long day on a loaded bike. Just like that, we were back at camp. No flying squirrels this time. 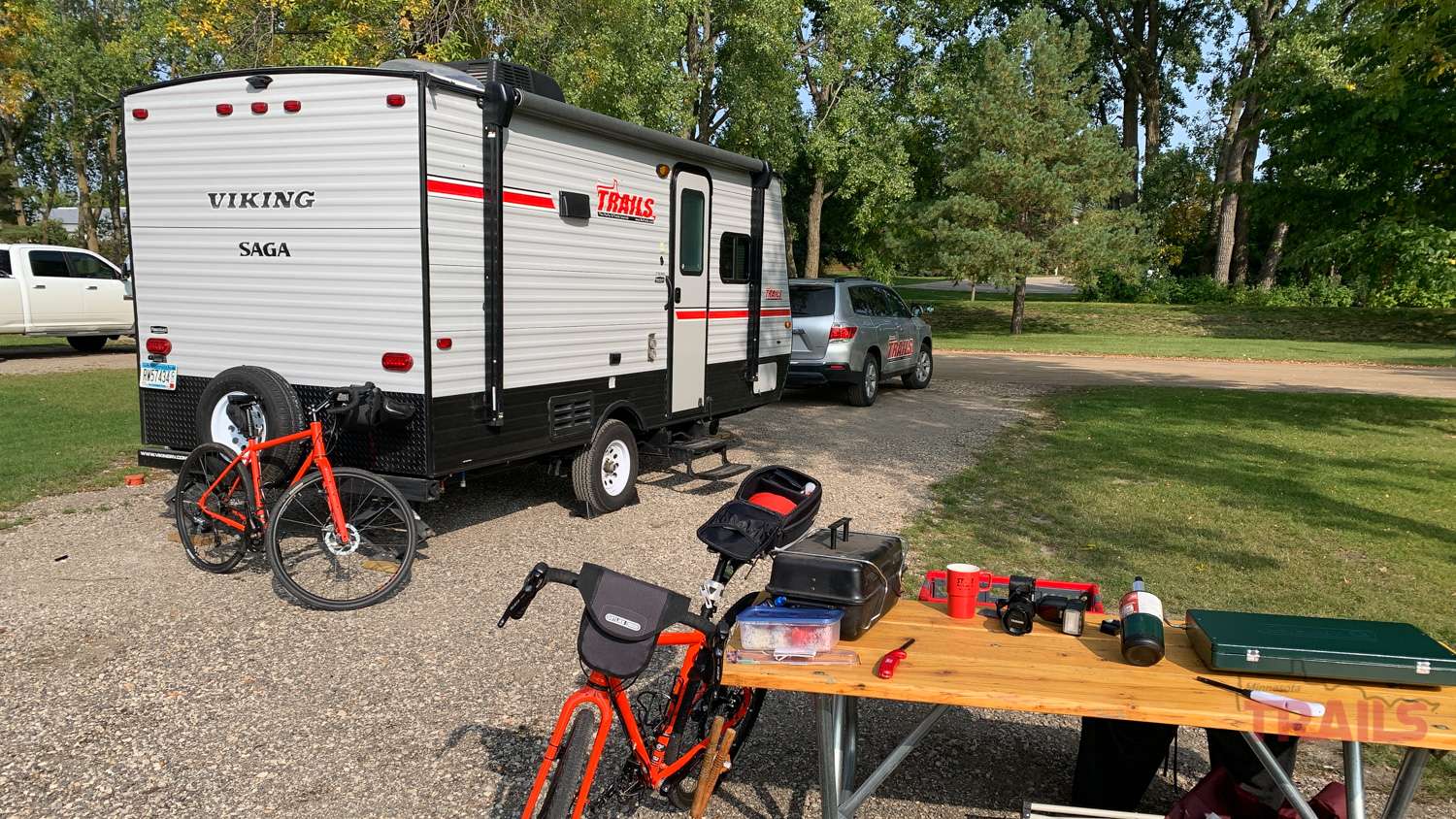 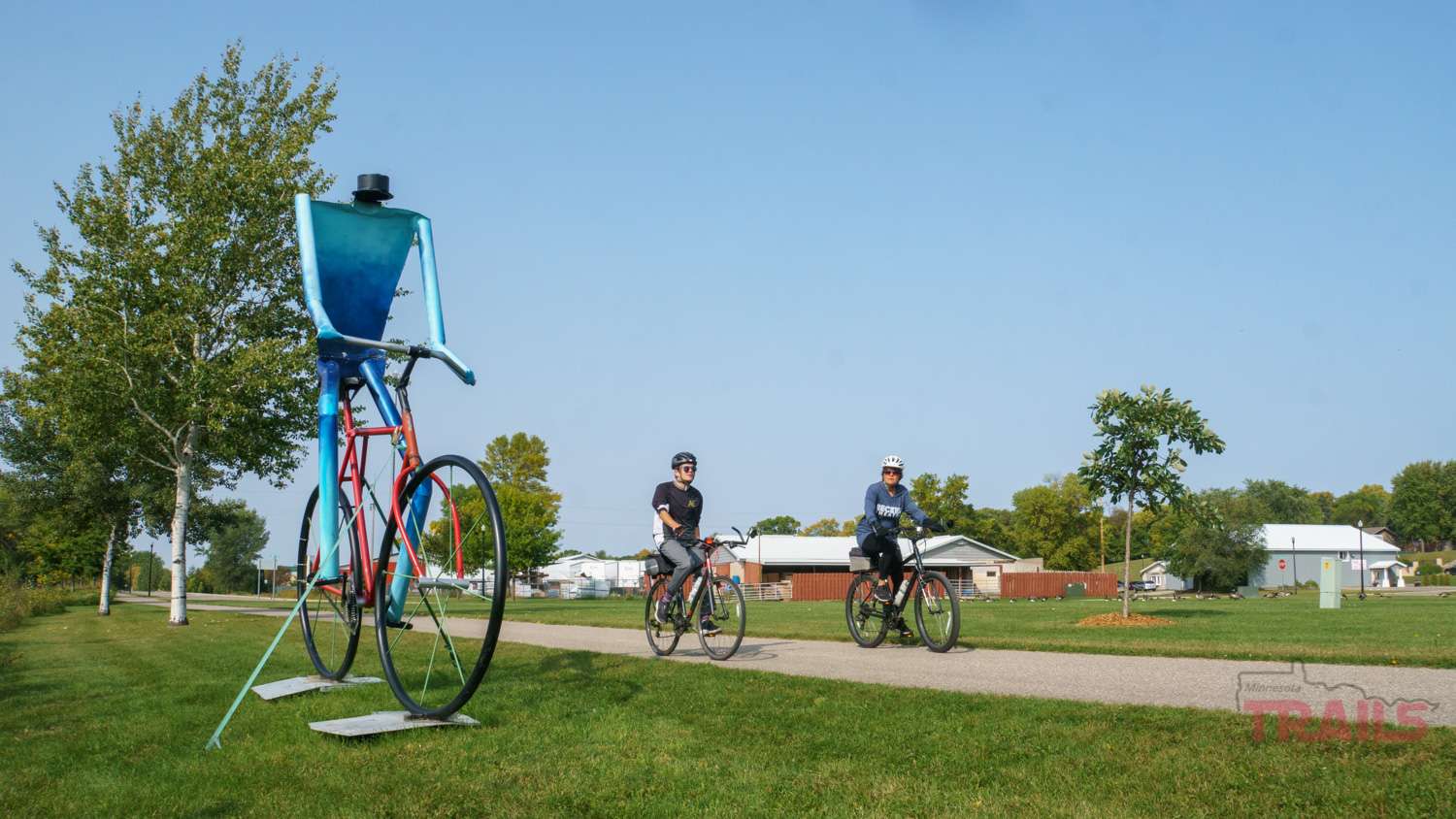 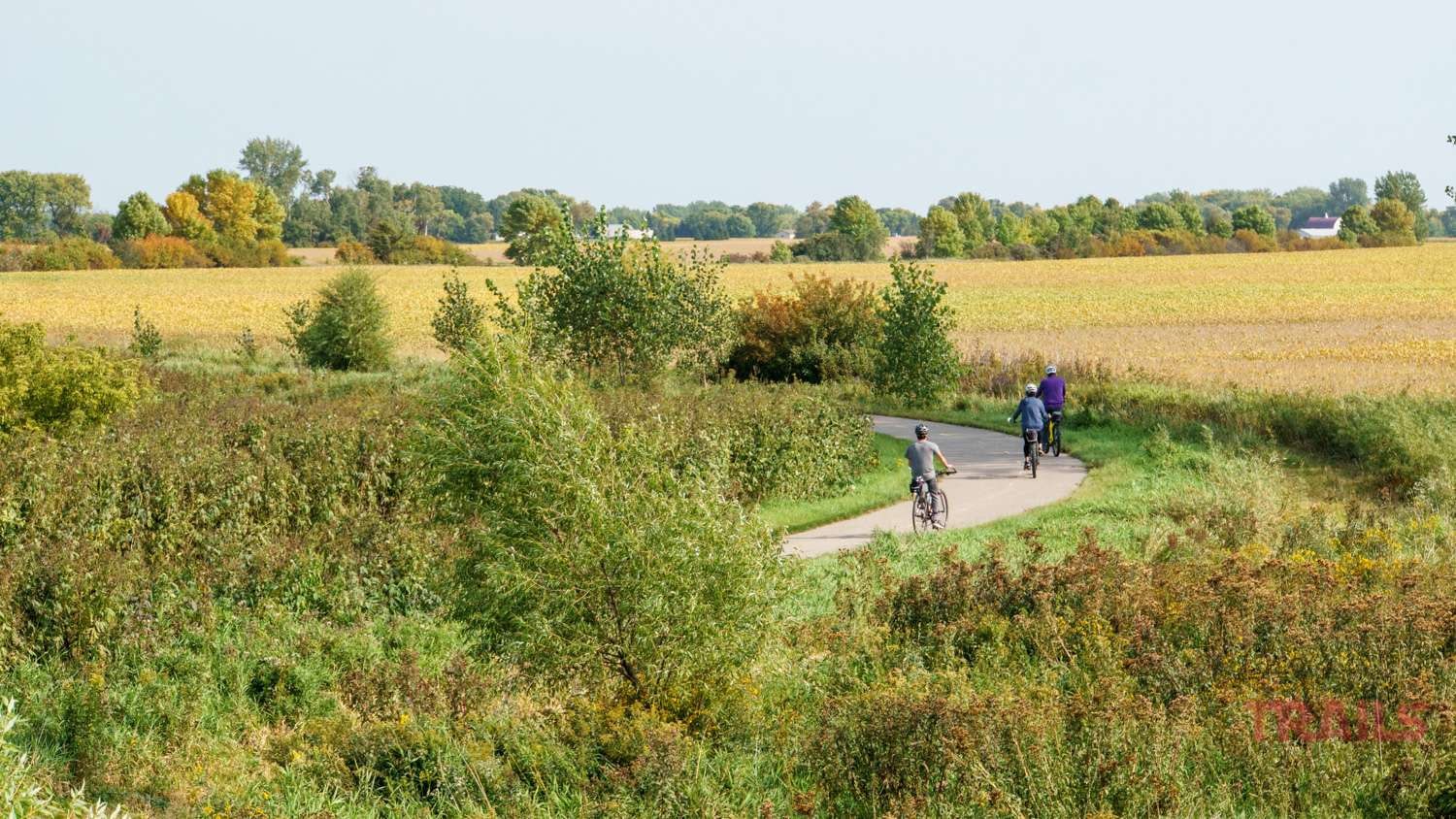 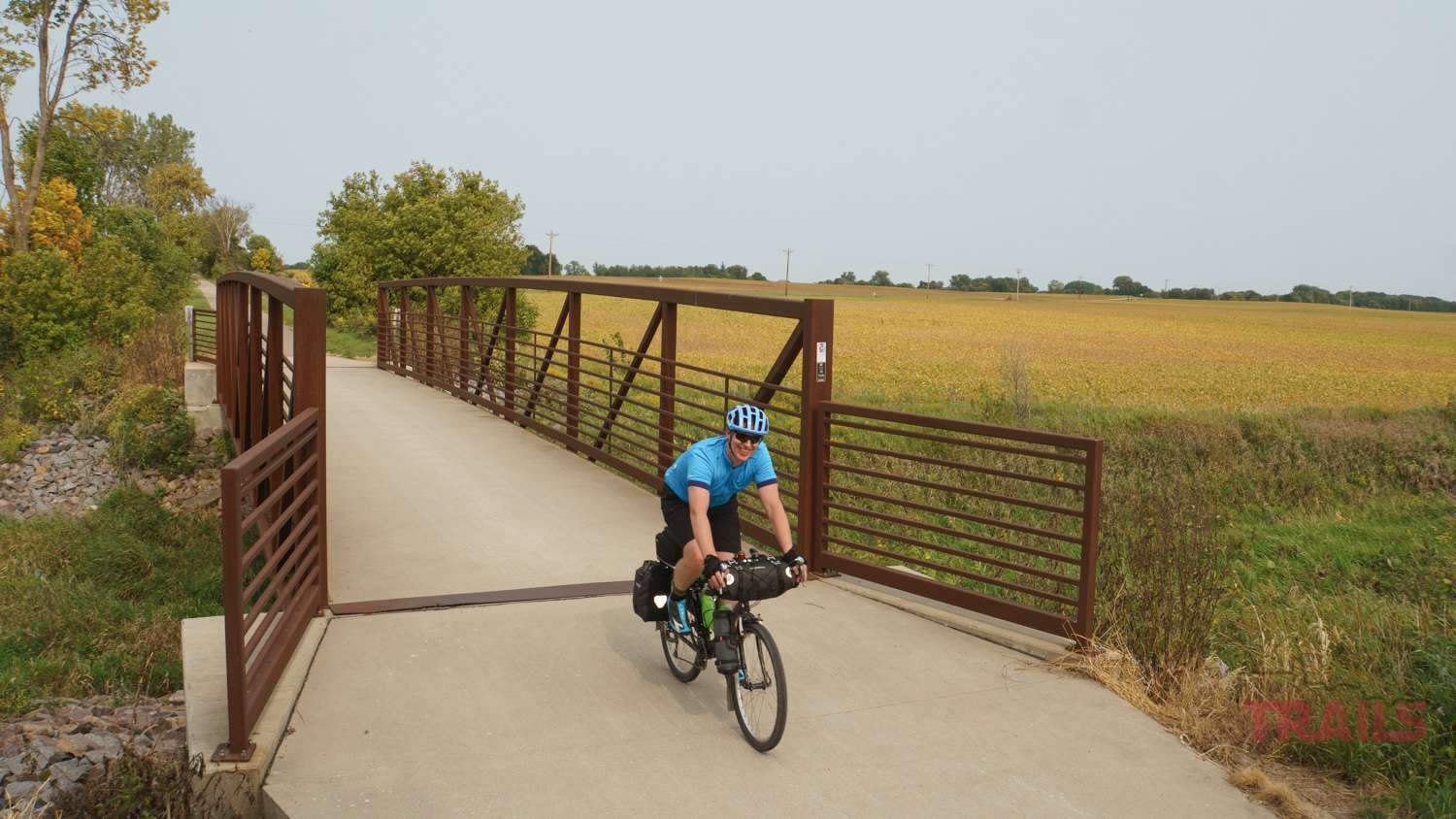 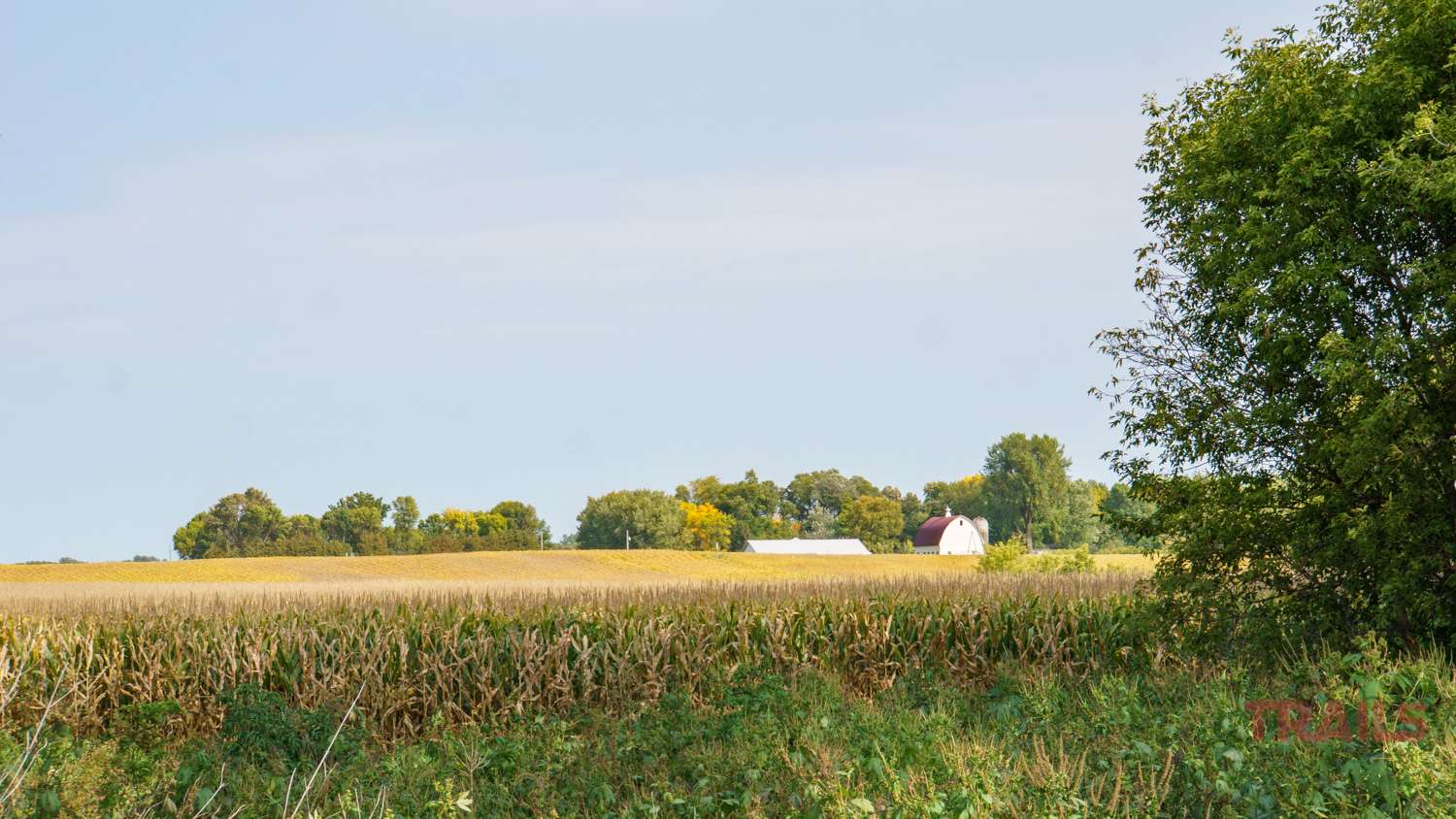 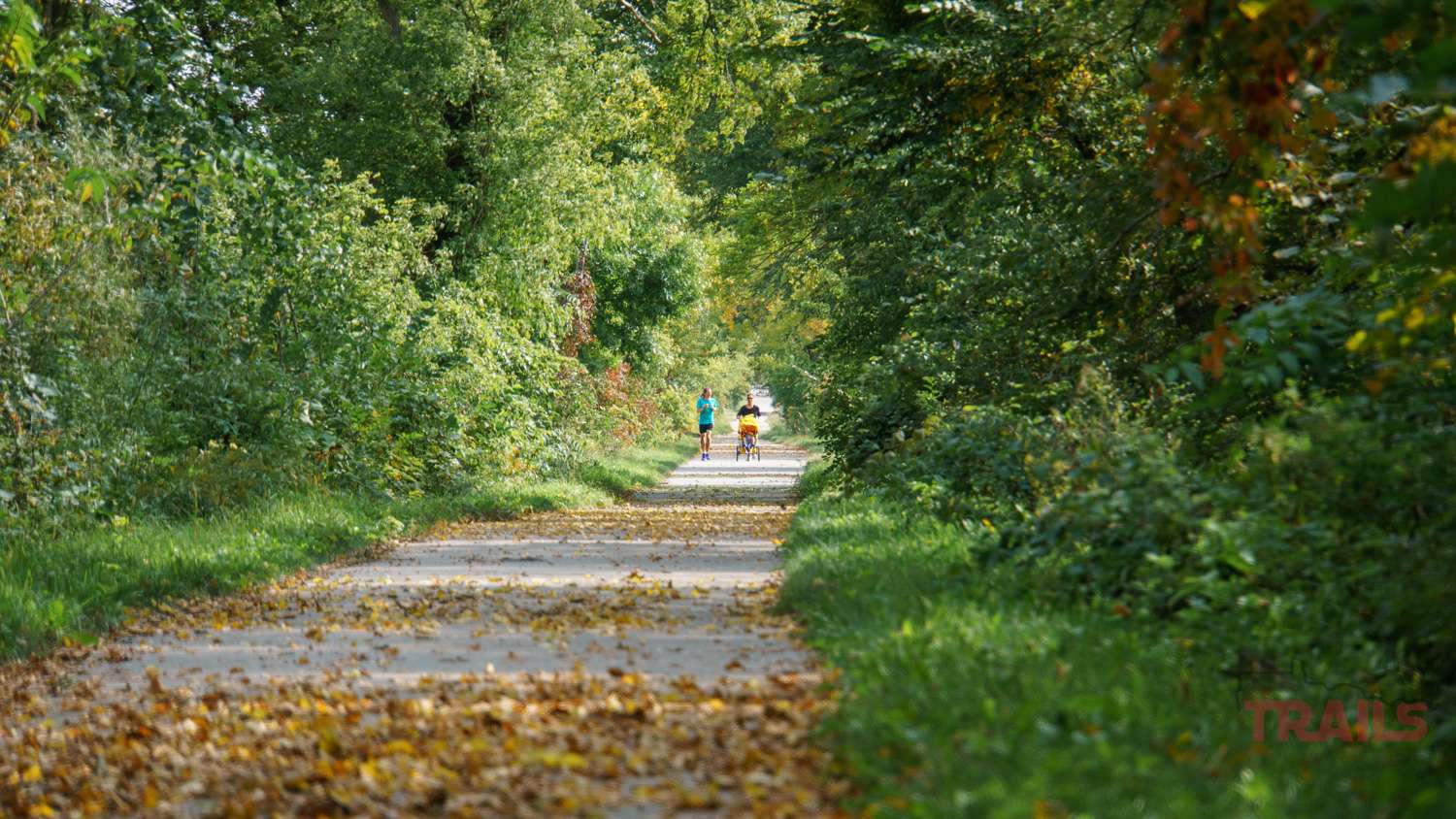 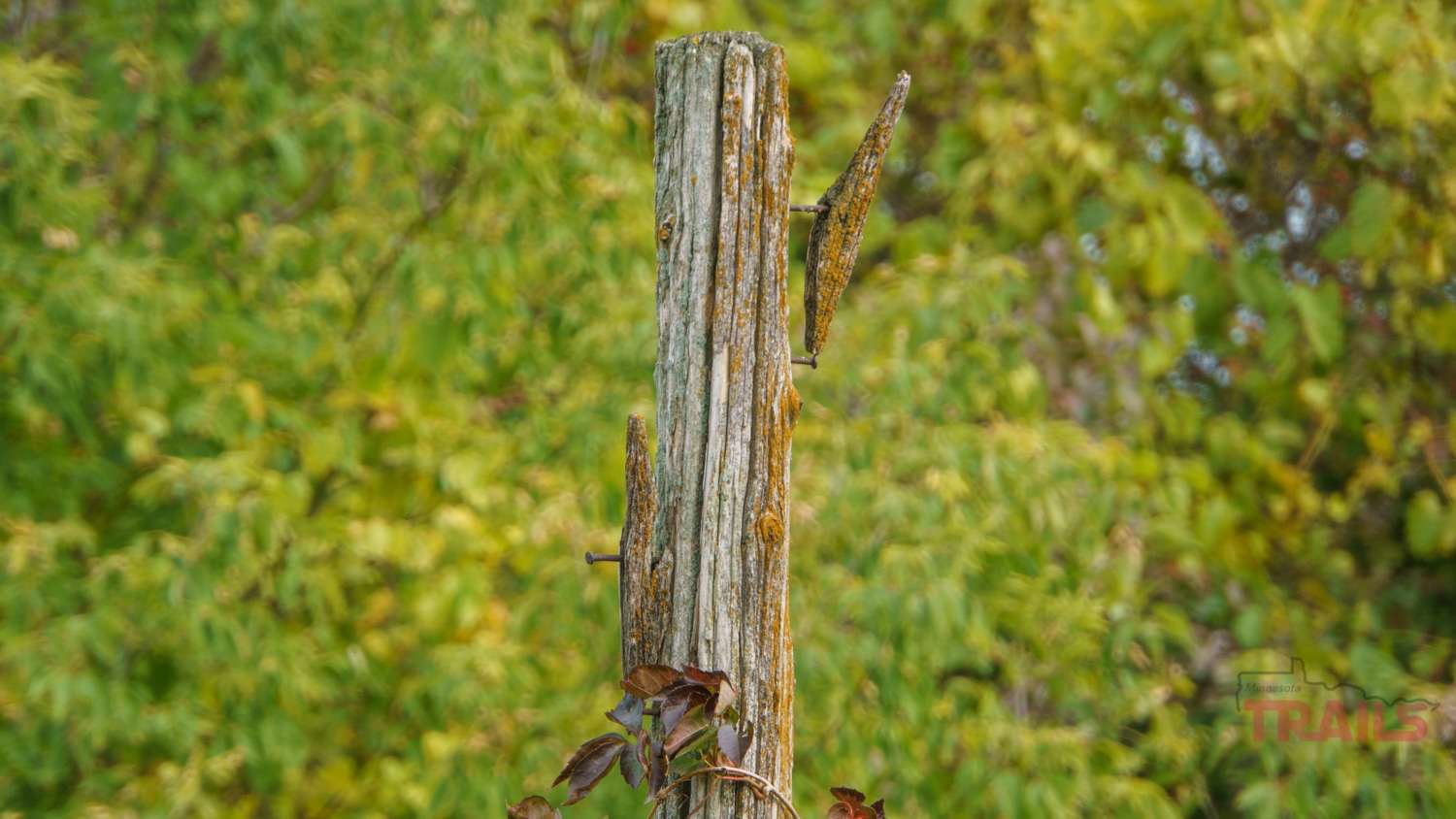 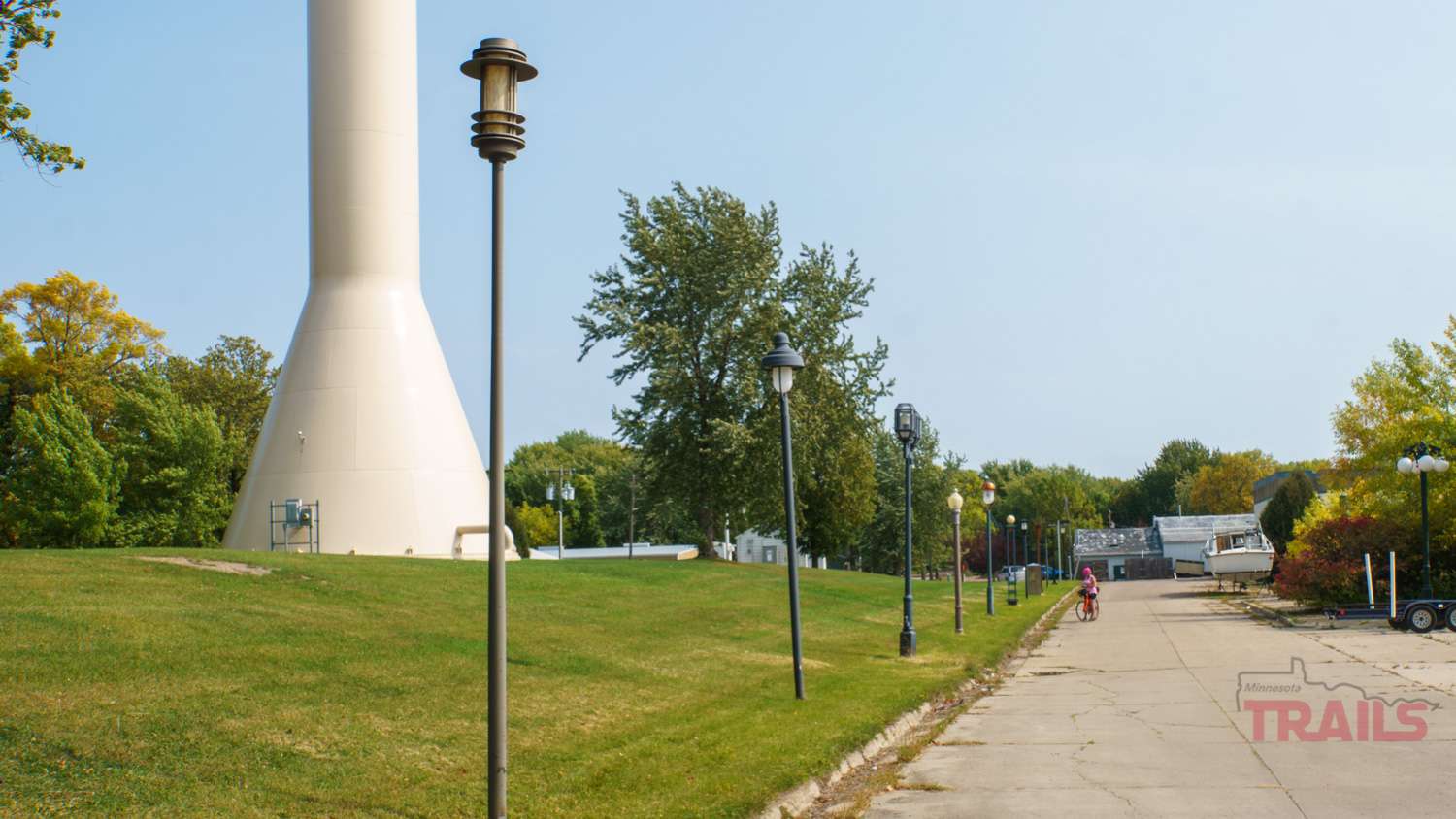 When we arrived, there was still room at a picnic table outside in the spacious parking lot and we had a chance to chat with Lane Wanous, head brewer and co-owner. Lane, a stainless steel welder by trade, had been homebrewing for some time when an article in the local Hutchinson Leader newspaper about a planned brewery opening caught his eye. Eventually, he and founder Dan Hart met over some of Lane’s beers and hit it off. Four years later, in May of 2018, Bobbing Bobber Brewing Company opened to the public in the former Hutchinson Coca Cola bottling plant. “For four years it was kind of painful at times, but it really gave us the ability to hone in and dial in our recipes,” he said. What came out of their 7bbl system met with great approval from the locals, now regulars, but 3BC made news outside of Hutchinson, too. During their first year, Lane said, Growler Magazine awarded them with a gold medal in the New Brewery category and bronze medal in the Brewery Taproom category. 2019 brought more awards: A Growler Magazine silver medal in the Fruit Beer Category for their Wanna Shake Your Tree Peach Cream Ale and a gold medal for their Tackle Bock Maibock at the Great American Beer Festival. “That’s something we’re very proud of,” Lane said.

With some 12 beers to choose from we masked up and went inside to order. The fishing theme in the taproom was definitely worth a medal. Fishing signs, bobbers, life jackets, paddles, rods and other decor covered the walls, but it didn’t stop there. The tables were converted sections of aluminum Porta Dock with wood slats and antique boat motors served as dividers at a narrow table along a wall in the brewing area. When we stepped up to order our flights, a couple was having their picture taken in a small half-boat in front of a lake background. The flight promptly arrived in a walleye (?) shaped carrier and we went back to our table outside.

After trying some beers I picked the Princess Therese Oktoberfest Lager (4.8 ABV, 20 IBU) as my clear winner. I’ve never been to the Oktoberfest in Munich, but a German friend of mine who has been, described the beer there as “very quaffable”, meaning easy and enjoyable to drink. And, by golly, it was almost October and I love me a seasonally appropriate beer (Looking at you, Hefeweizen-in-January person). The runner-up comes with a story, too. Lane told me the Hootie Who Salted Brown Ale (5.2 ABV, 26 IBU) was supposed to be a take on a Salted Nut Roll, but ended up being just salted. It also turned out delicious with just a hint of salt at the end. On a 7bbl batch, the pound of Himalayan Pink Salt is “really just a pinch,” Lane said. Jen picked Hootie Who as her winner and went with Set The Sails Irish Red (4.9 ABV, 17 IBU) as her second choice. Remember the days when just about the only red ale you could get was Killian’s by Miller Coors? Ahhh, progress! 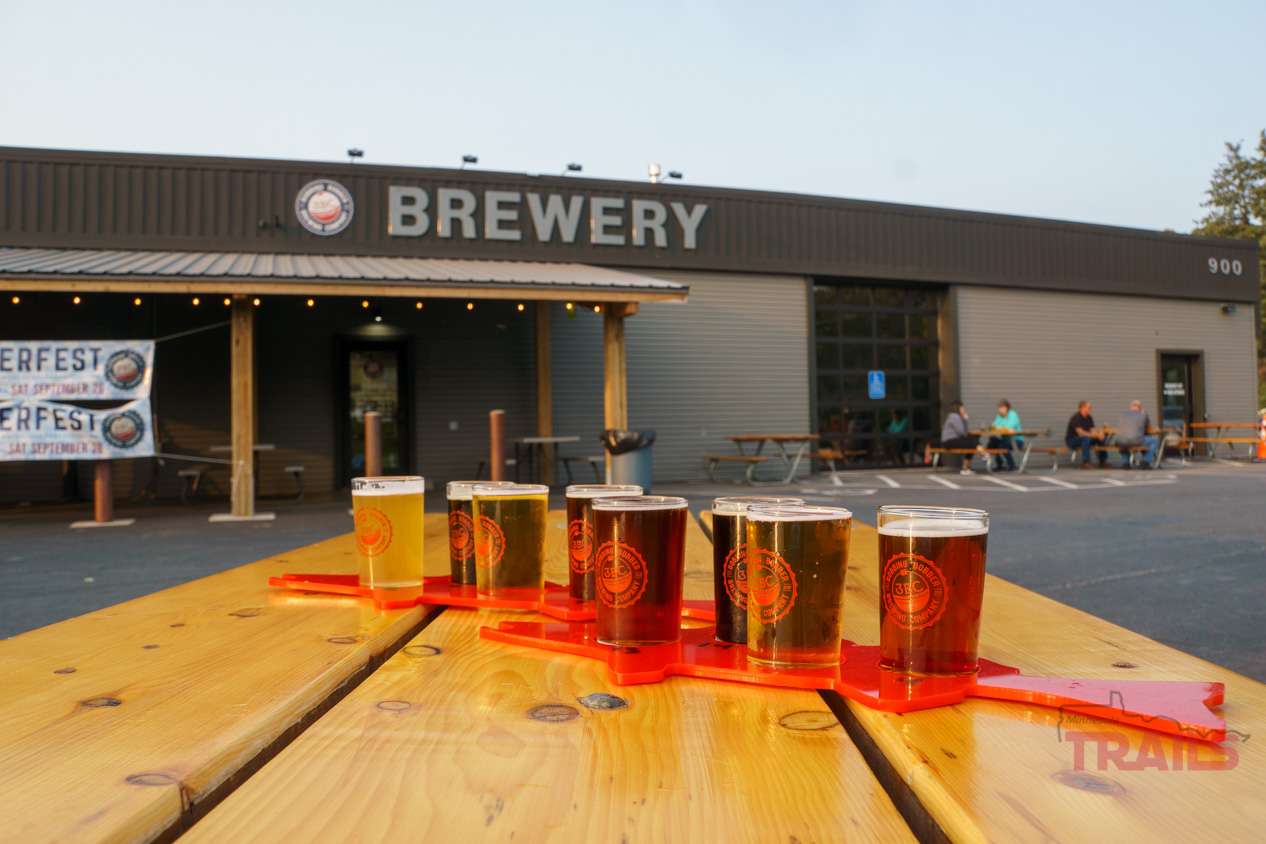 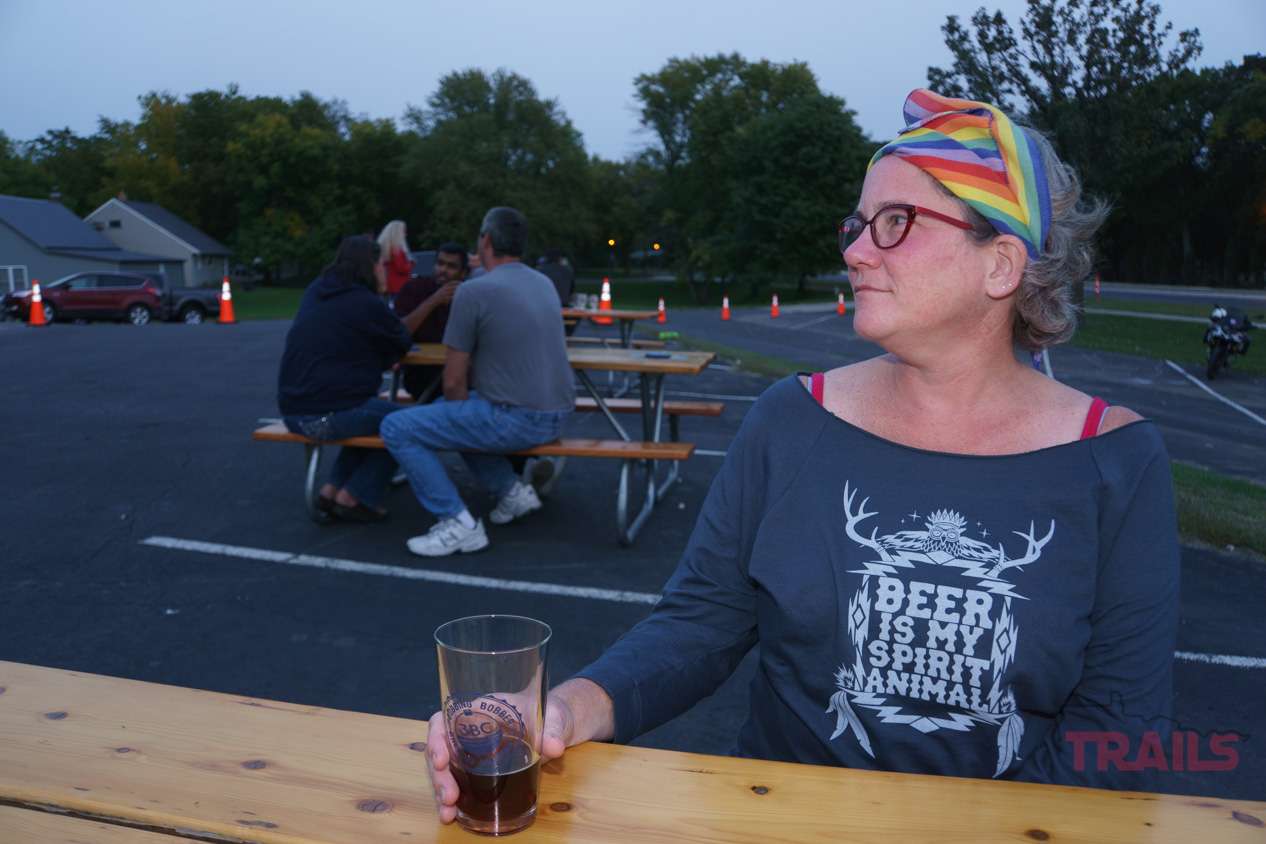 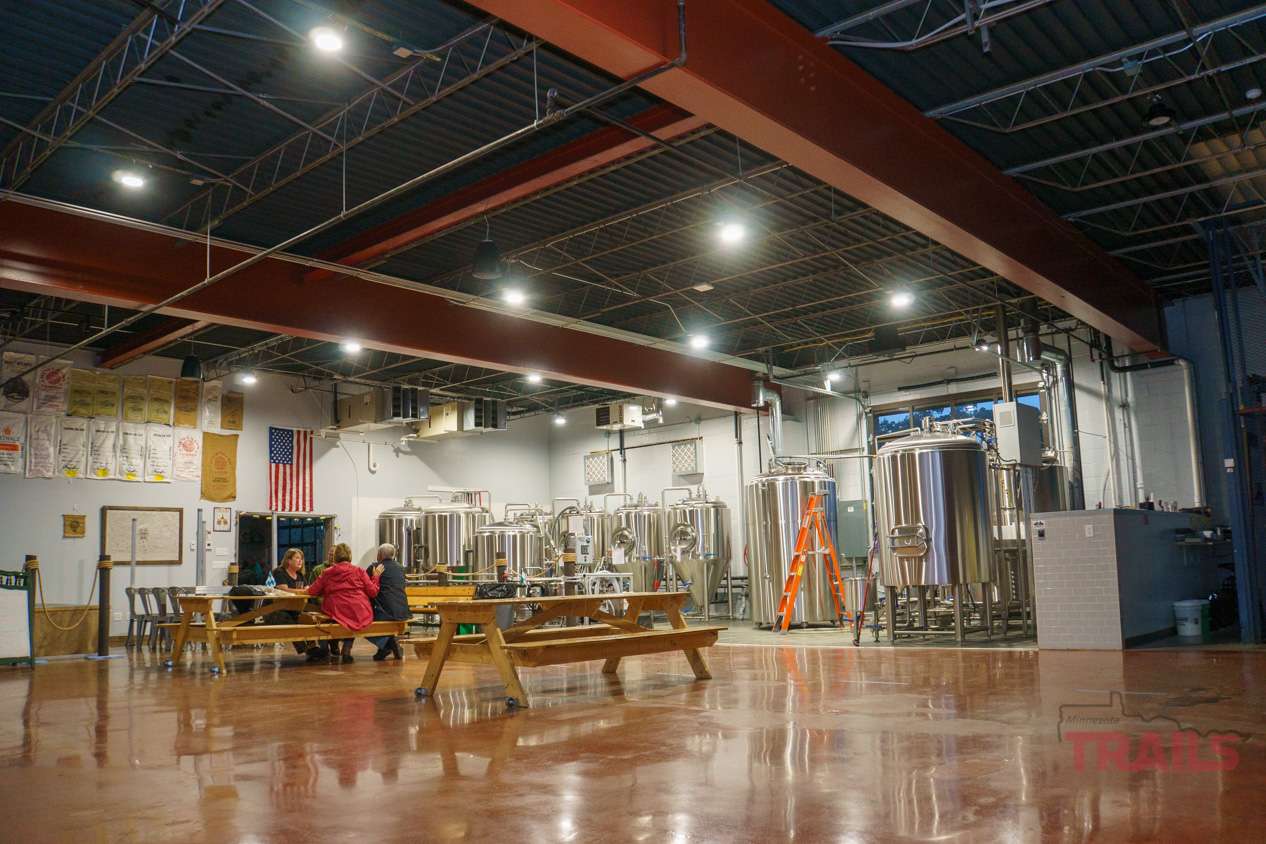 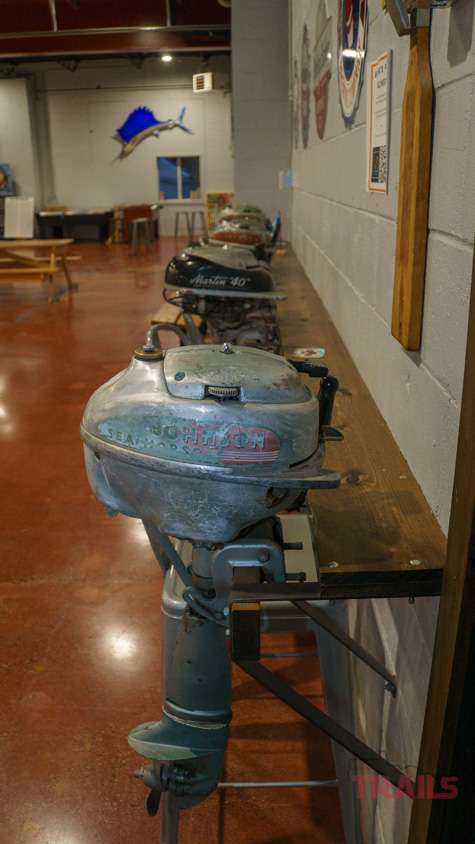 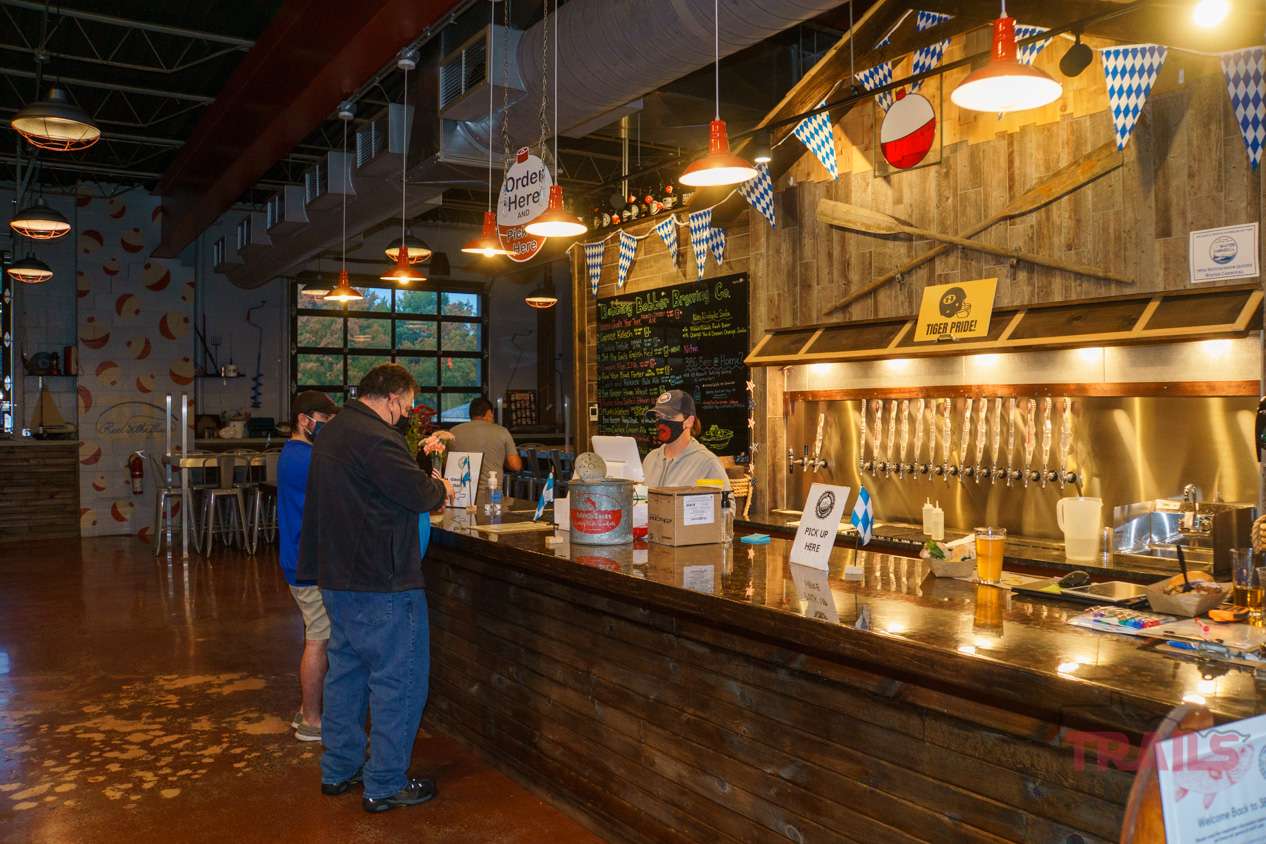 We really enjoyed our time in Hutchinson and the campground was about as close to the trail as you can get. If you go, take the time to check out all of Hutchinson’s public sculptures, some of which are along the trail through town. Stop in at the Visitor Bureau and let them show you what else there is to do in town. If camping isn’t for you, a good hotel option is the AmericInn, which is just a quarter mile from the trail. Should you need anything bike-related, Chad at Outdoor Motion has you covered.

Make Your Escape: A Cuyuna Christmas

Writer Tonja Sahaydak spent Christmas with the family in a Cuyuna yurt and went dashing through the snow.

A ride on the Lake Wobegon Trail pairs very well with a visit to Bad Habit Brewing in Saint Joseph.