When the voyageurs carried their canoes around the gorges of the Saint Louis River they could not have found tougher terrain to travel. The raging river, steep cliffs and marshy backwaters made the area of what now is Jay Cooke State Park an obstacle rather than a destination. Today, the iconic swinging bridge makes it easy for visitors to cross the river and its many miles of trails make Jay Cooke one of Minnesota’s most popular state parks. Jay Cooke State Park is located three miles east of Carlton in Minnesota’s Carlton County. Read more … 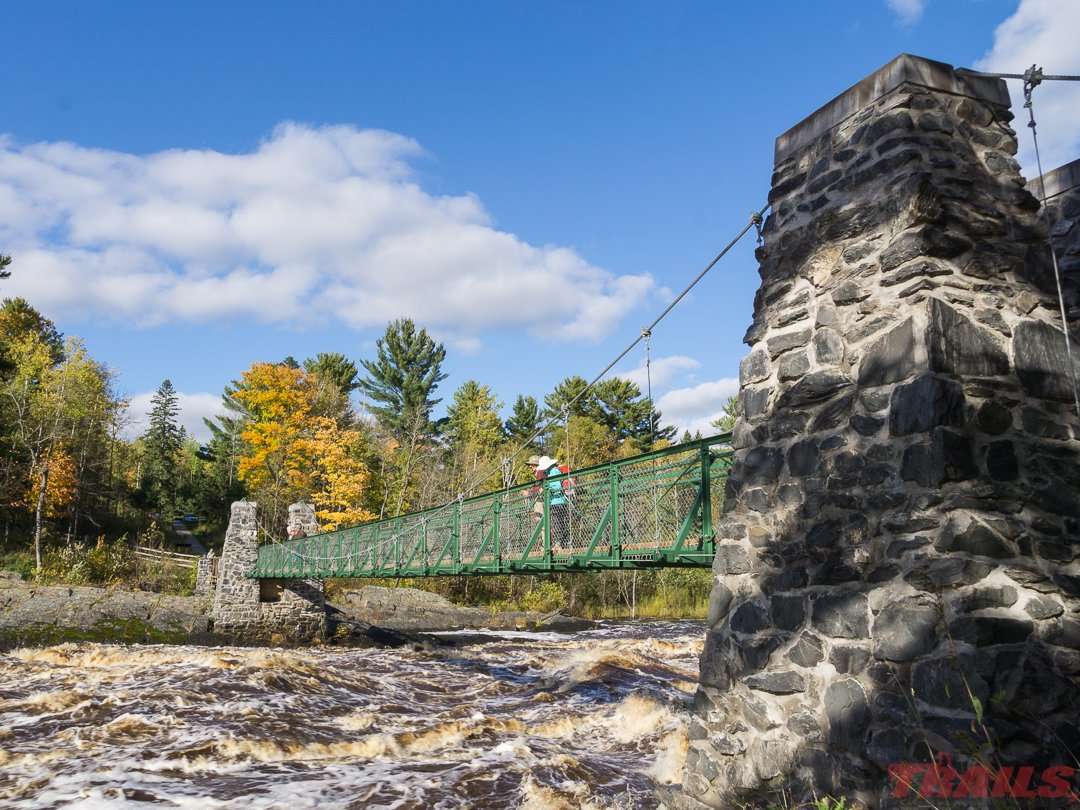 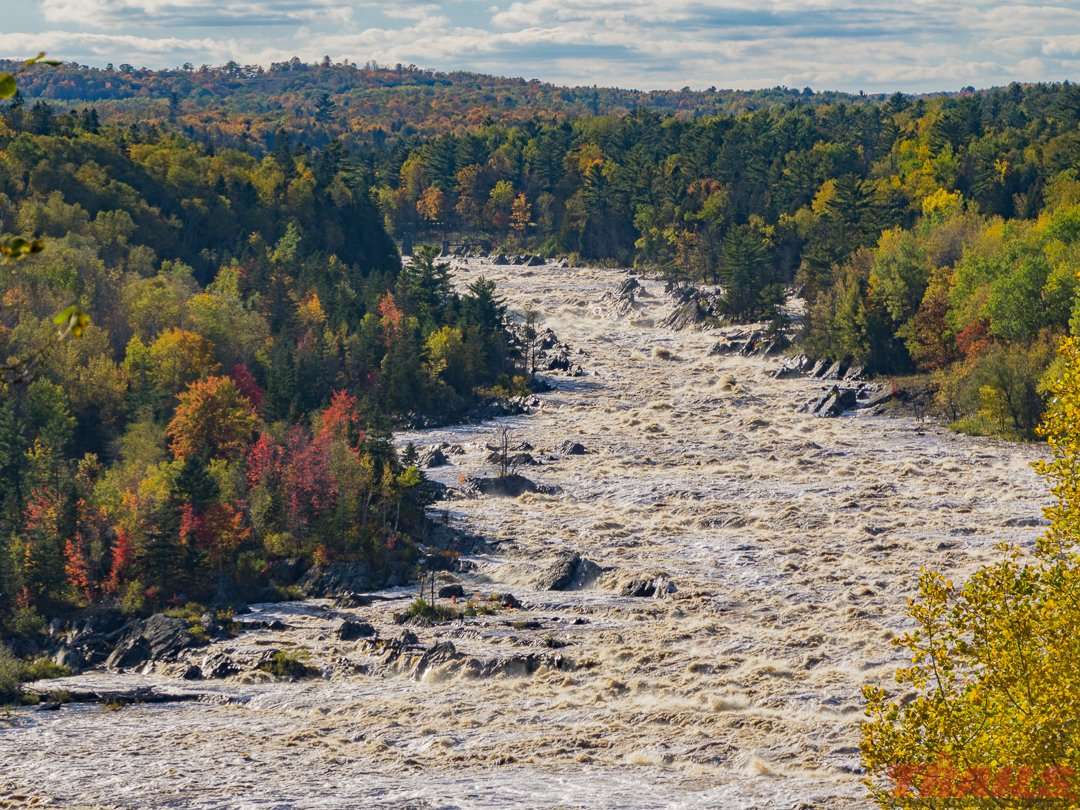 Over 50 miles of foot trails, six miles of horse trails and 13 miles of mountain bike trails await visitors who want to explore the country that the voyageurs saw. Some trails follow the river while others head into the wooded hills and valleys of the park. Jay Cooke State Park is also crossed by the North Country Trail, a 4,600-mile foot path from New York to North Dakota. Bicyclists can ride the paved Willard Munger State Trail that runs from Hinckley to Duluth and has a connecting spur into the park. 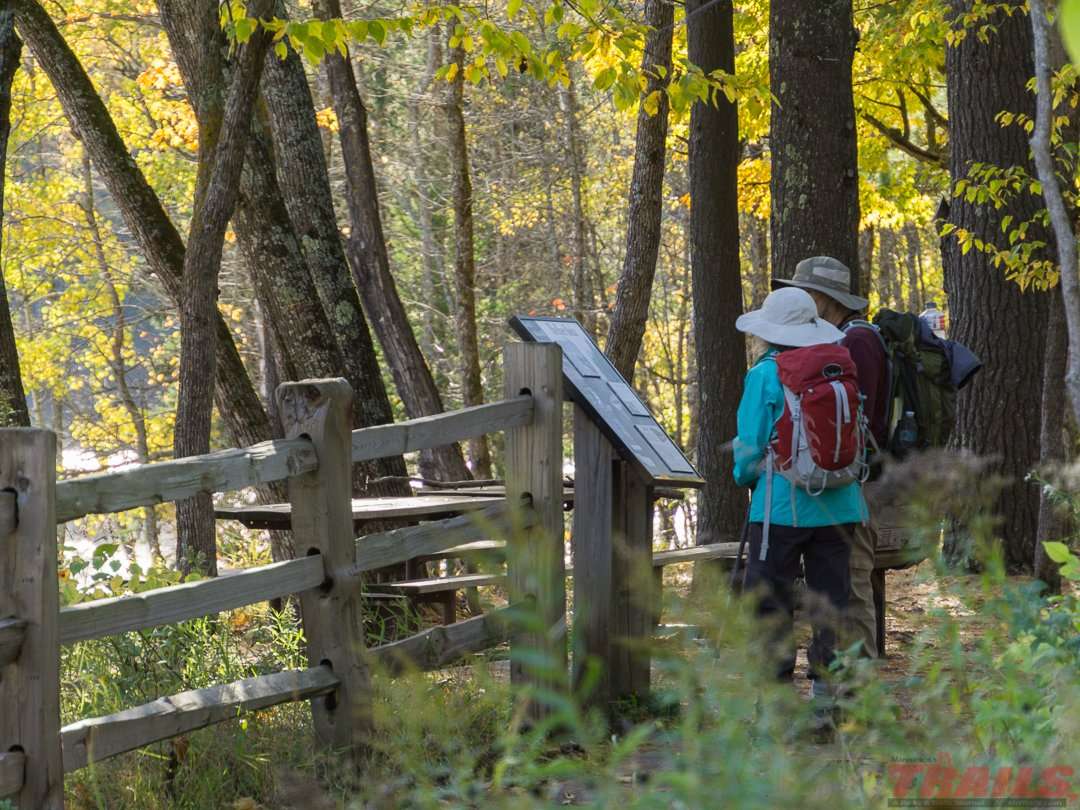 Jay Cooke is a hiker’s paradise 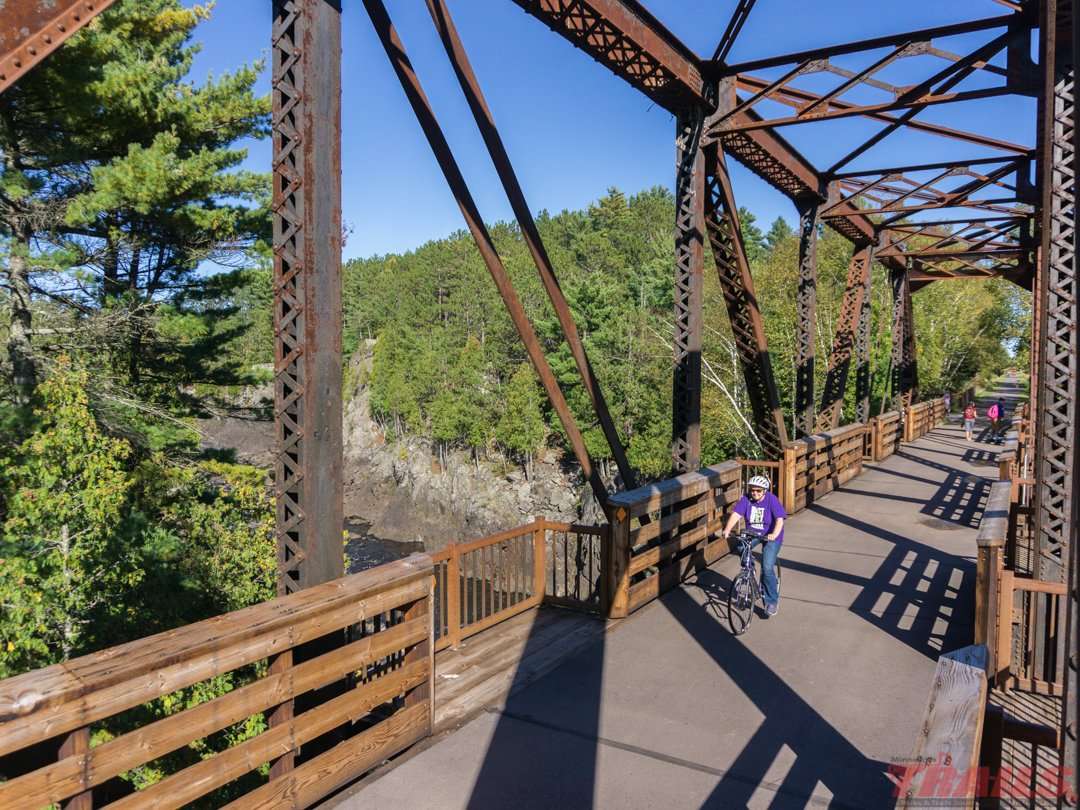 The park’s 79-site campground is located across the road from the River Inn headquarters. The group camp has two tenting sites with space for 25 people in each. Across the river in the backcountry of the 8,900-acre park are four backpack campsites that require a hike of one to four miles. For a less rustic experience, rent one of five camper cabins. 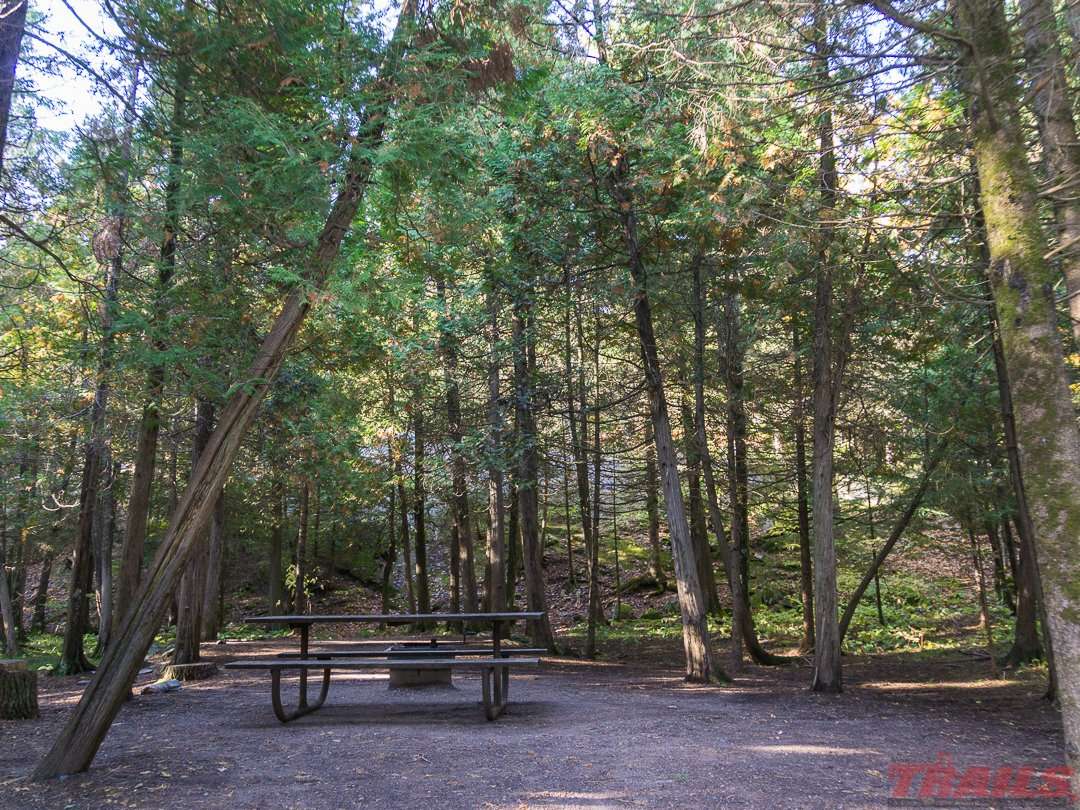 A typical campsite in the main campground 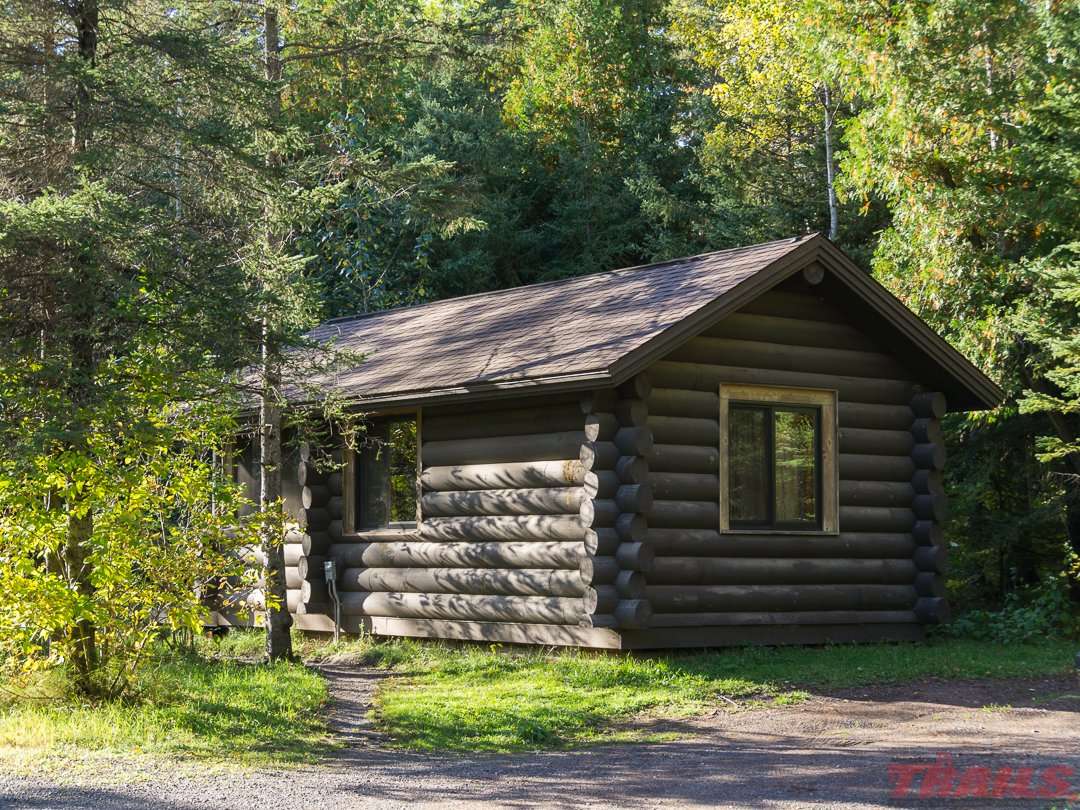 The swinging bridge is the only access to the trails across the river and is a good spot to see the tangled mass of jagged rock in the St. Louis River bed. The craggy outcrops have been folded and fractured. Heat, pressure and other natural forces have tortured the rock beds so much that the river gorge is a geological curiosity studied by groups from around the country. 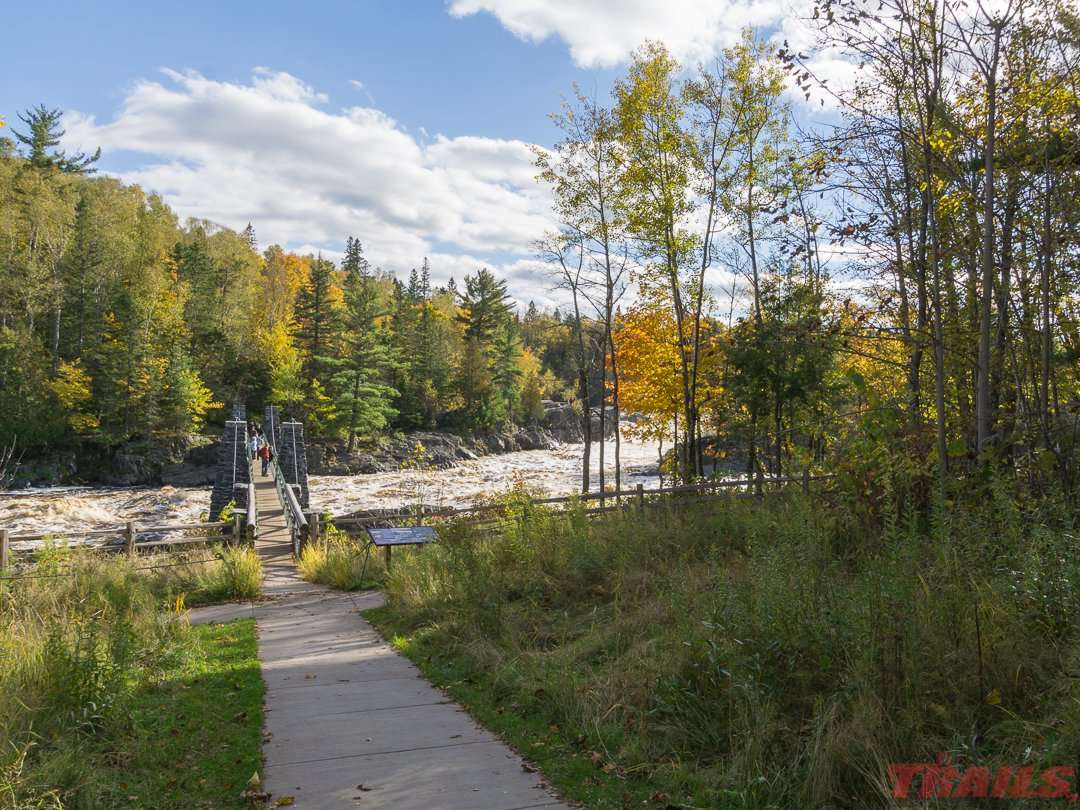 Fall scenery with the swinging bridge

The mood of the St. Louis River changes from season to season. At times, the water thunders over the ancient slabs of bedrock; at other times it trickles and splits around rocky outcrops. 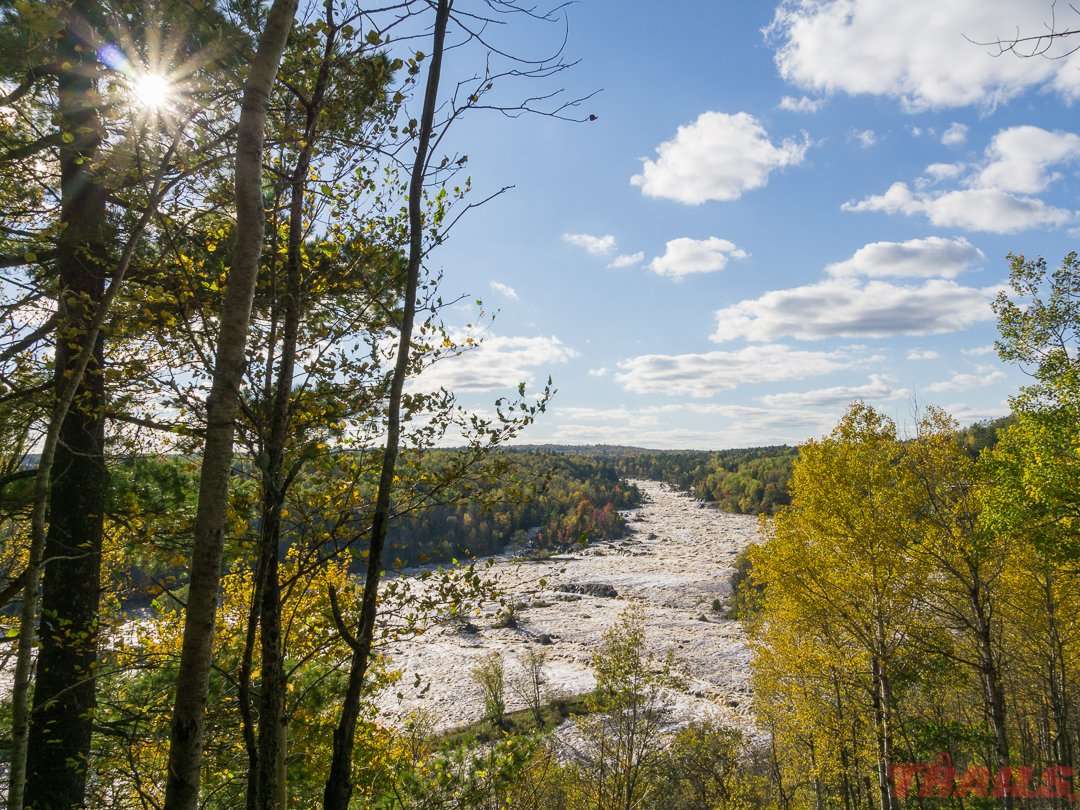 The St. Louis River as seen from a scenic overlook near the picnic area

Oldenburg Point, a popular picnic area with an open shelter, offers good views of the snarled mass of rock.The river is not safe for swimming or boating, although it is a state-designated canoe route above Cloquet. There are two dams on the St. Louis River near the park; the Thomson Dam near the northwest boundary and the Fond du Lac Dam near the northeast boundary.

Anglers take Brown Trout in the St. Louis River, some walleye and northern in slower stretches, and in Otter Creek. Brook trout are found in Silver and Otter Creeks.

At Jay Cooke, you’ll see ash, maple and basswood forests as well as white pine and spruce woods. These forests support a large population of deer as well as black bears, timer wolves and coyotes. Eagles nest along the river, marsh hawks and pileated woodpeckers also inhabit the park.

The St. Louis River, which flows through Jay Cooke State Park, has been the connecting link between the upper Mississippi River and Lake Superior for centuries. Like other rivers that spill into Lake Superior, it plunges several hundred feet down rocky canyons in the space of a few miles, creating impassable falls and rapids. To reach calmer water above these obstacles, the Native American explorers and fur traders had to portage around them.

The 7-mile-long trail that bypassed the spectacular rocky gorge of the lower St. Louis River was called the Grand Portage. It was a rough trail of steep hills and swamps that began at the foot of the rapids above Fond du Lac and ended near Maple Island. It was divided into 19 pauses (rest stops) spaced one-third to one-half mile apart. To portage the freight, each voyageur carried two or three packs weighing up to 90 pounds each. These were supported by a portage strap, which passed around the voyageur’s forehead and reached to the small of his back. Once he reached a pause with his load, the voyageur would jog back to the last stop for more packs. It took an average of three to five days for a crew to complete the Grand Portage, sometimes longer under bad conditions. It was backbreaking labor, and the voyageurs would be plastered with mud and covered with mosquito and fly bites.

Once past the portage, the fur traders paddled up the St. Louis River to the Savanna Portage, another grueling trail that provided access to the Mississippi River. Or they continued on the St. Louis to Lake Vermillion and the Rainy River. Native Americans used these routes for thousands of years before explorers and fur traders came from Europe. The Grand Portage was still in use as late as 1870, but a new railroad meant the end of the old passage.

Jay Cooke State Park has space for long winter hikes or ski outings, and trails to challenge all abilities. The park has 32 miles of designated ski loops and several side spurs that lead to overlooks of the snowy hills and valleys. At least 20 miles are groomed by park staff. An additional 12 miles are groomed when snow conditions allow. Snowshoeing is allowed throughout the park except on groomed ski trails. Jay Cooke maintains a few miles of packed snowshoe trails. 12 campsites are available for winter camping.
More about skiing at Jay Cooke State Park 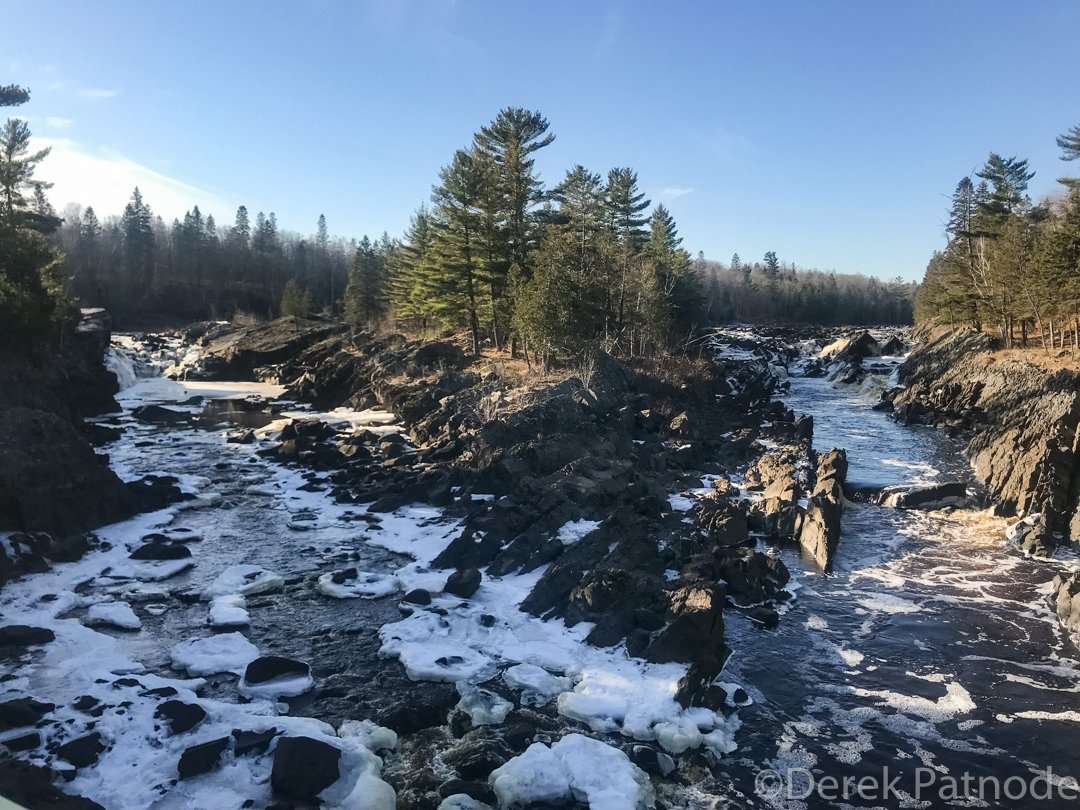 Jay Cooke State Park is worth a trip in the winter