At the point where the smooth-flowing St. Croix River suddenly plunges over rocks and twists through a narrow, cliff-lined gorge are two unusual state parks. Both are called interstate State Park, formed as a joint venture between Minnesota and Wisconsin in 1895 to preserve the wild scenery of the St. Croix Dalles. Two unusual park activities are rock climbing and kayaking. Climbers scale the basalt cliffs that tower above the river in the narrow dalles. Kayakers run the rapids in the dalles below the highway bridge, practicing rolls and other maneuvers.
Interstate State Park is located in Taylors Falls on the St. Croix Scenic Byway in Minnesota’s Chisago County. 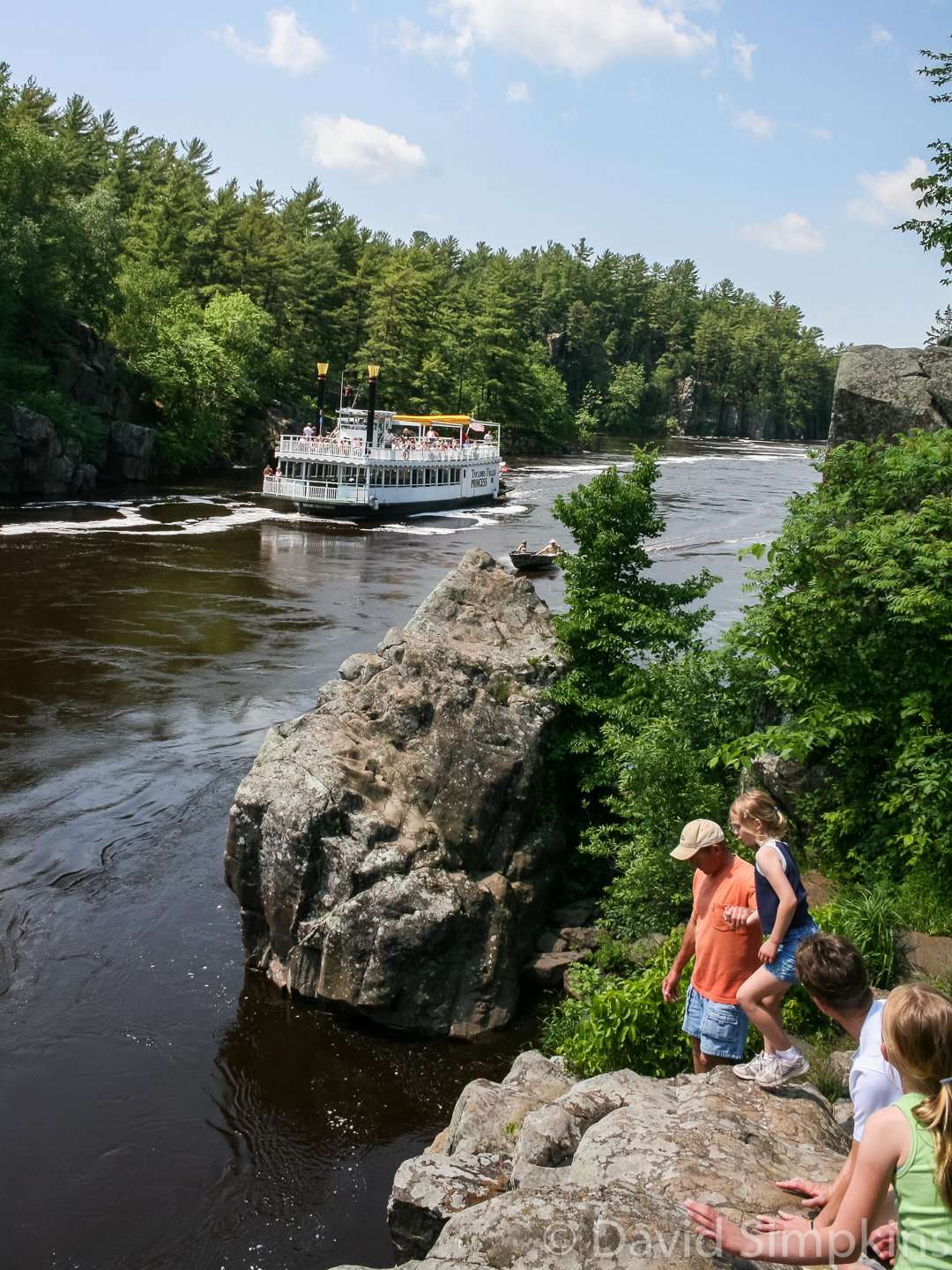 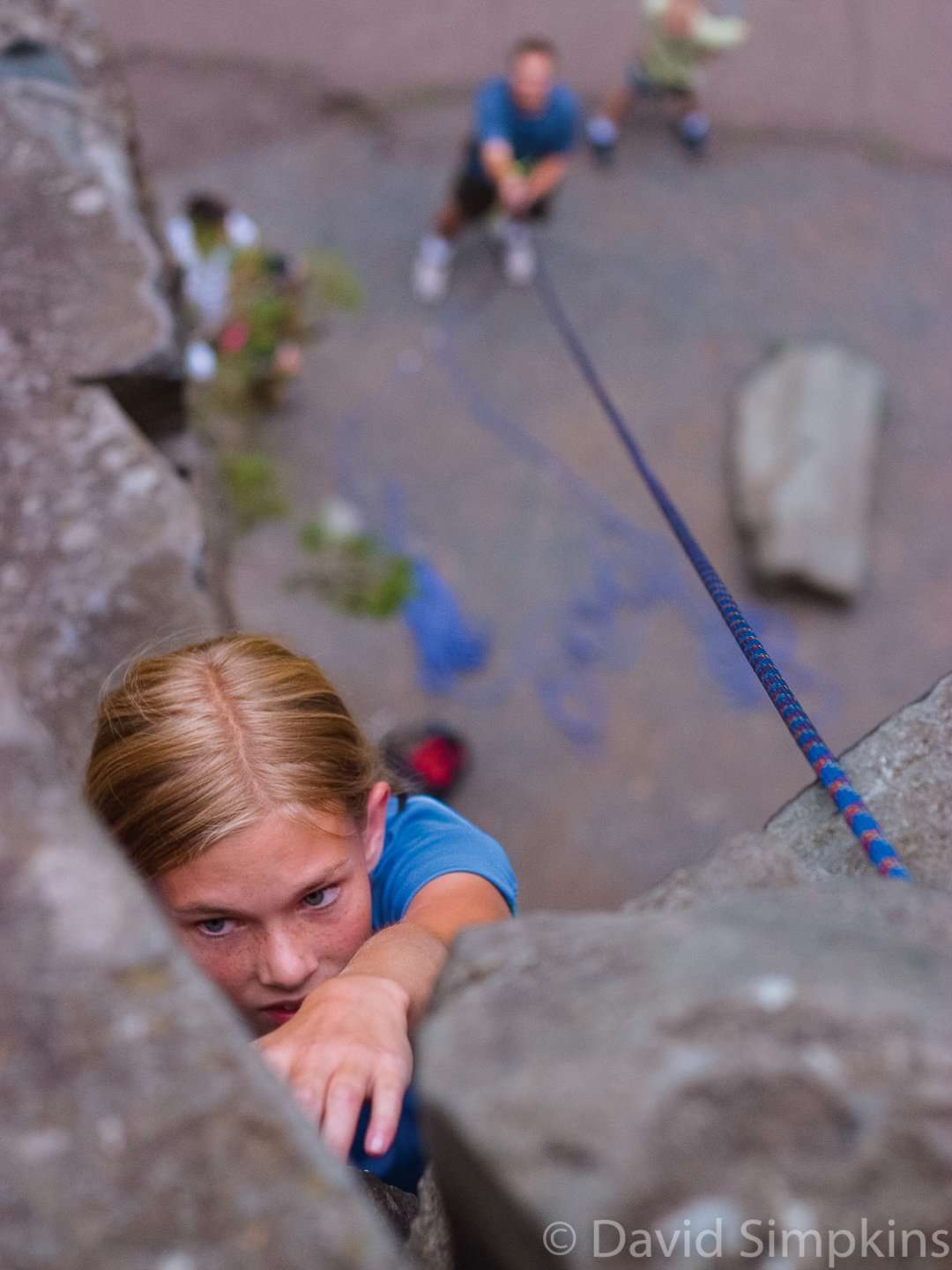 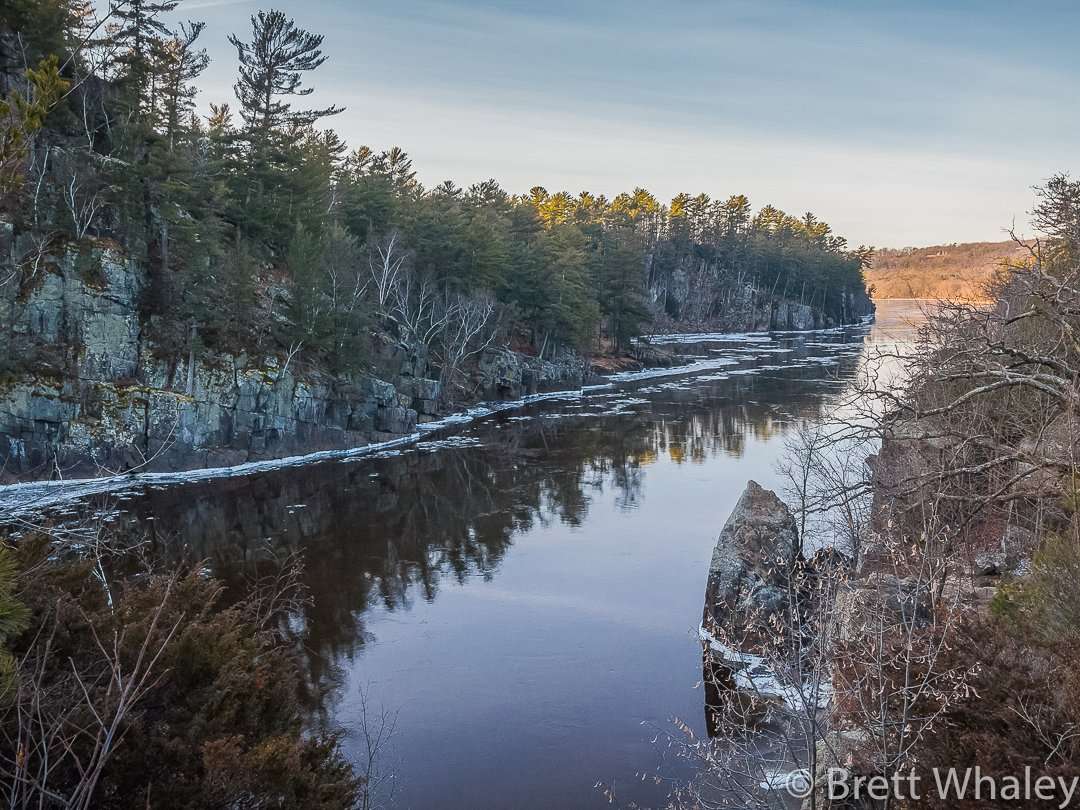 A calm first day of winter on the St. Croix River 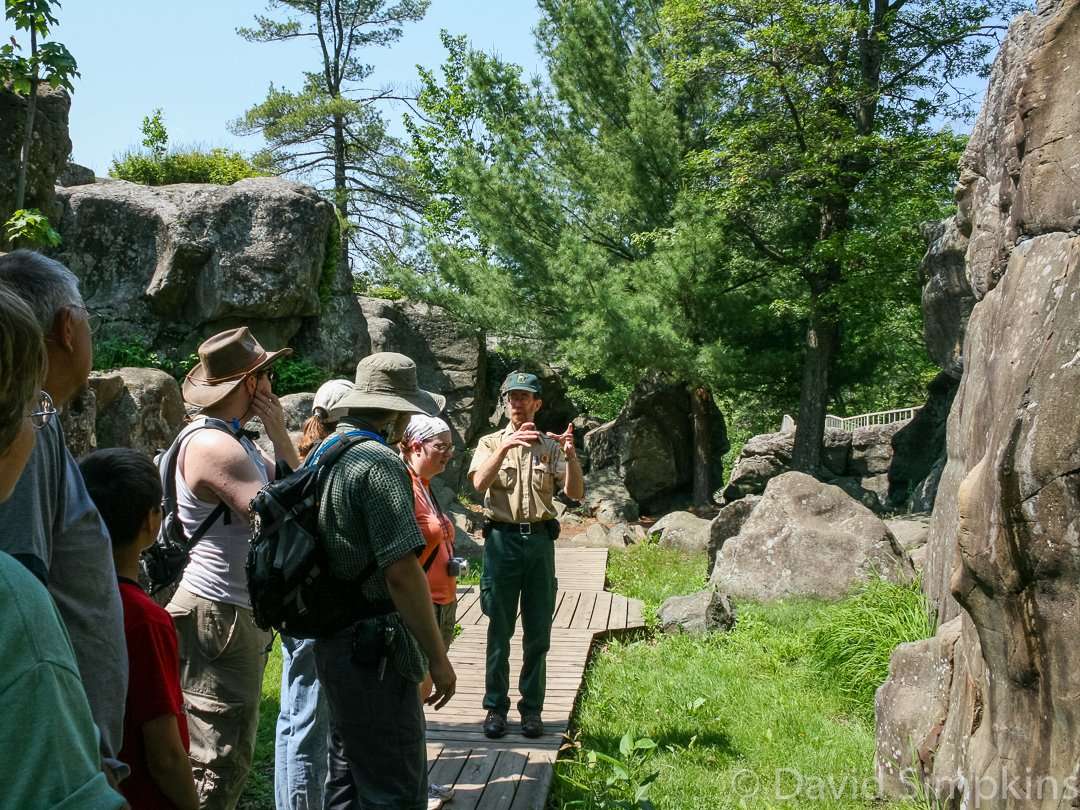 Naturalists educate visitors about the pothole formations in the park 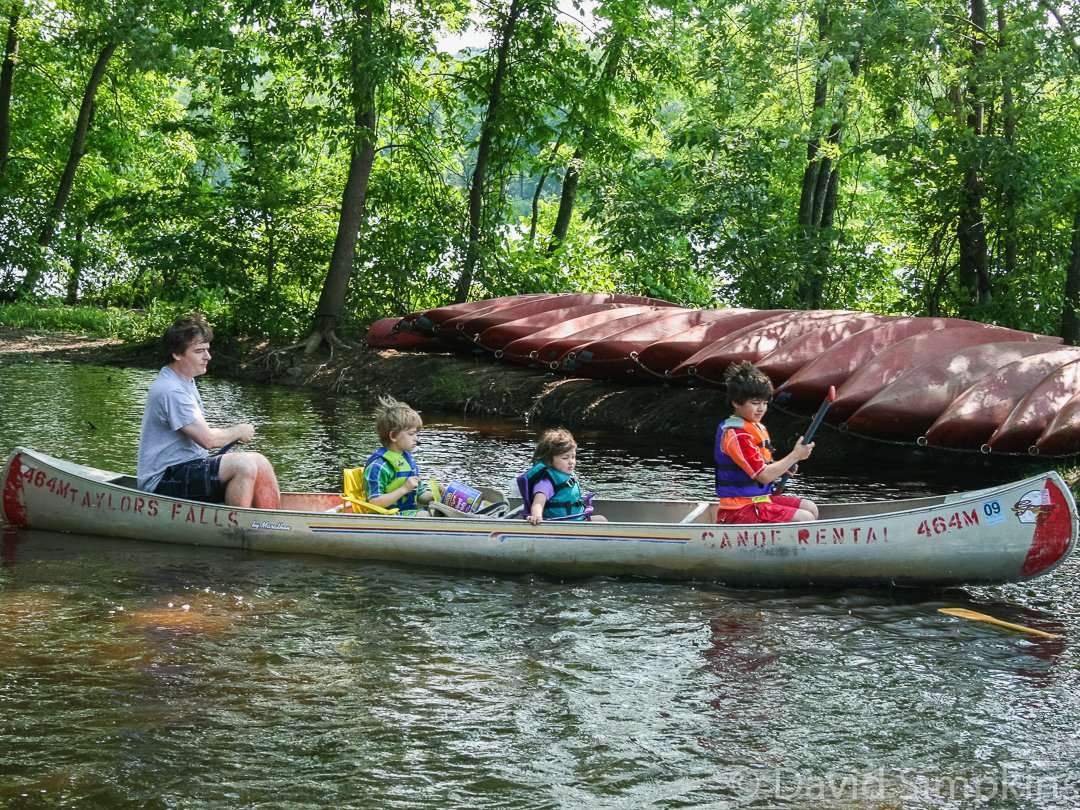 Canoeing on the lazy waters of the St. Croix River is a popular pastime 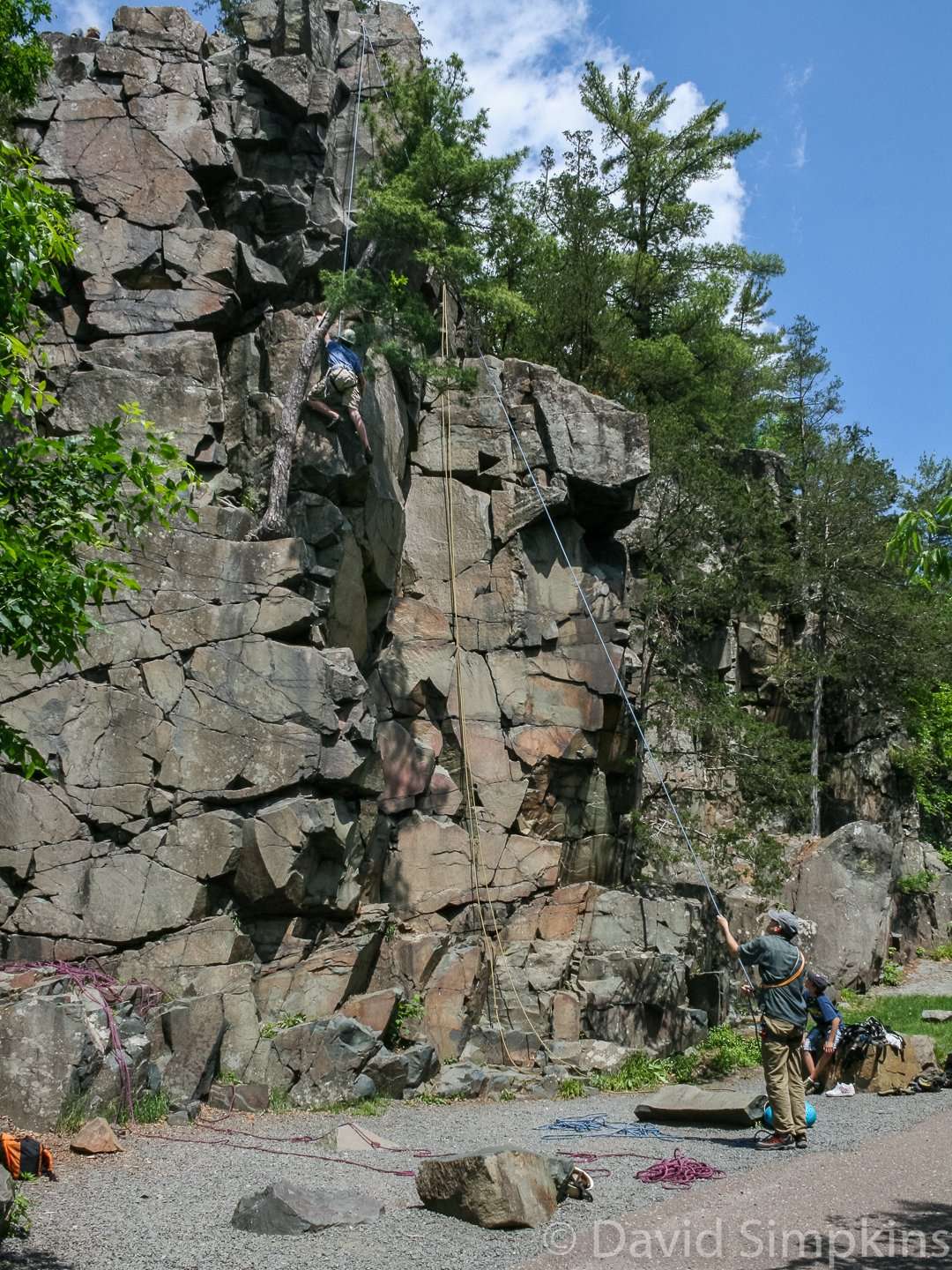 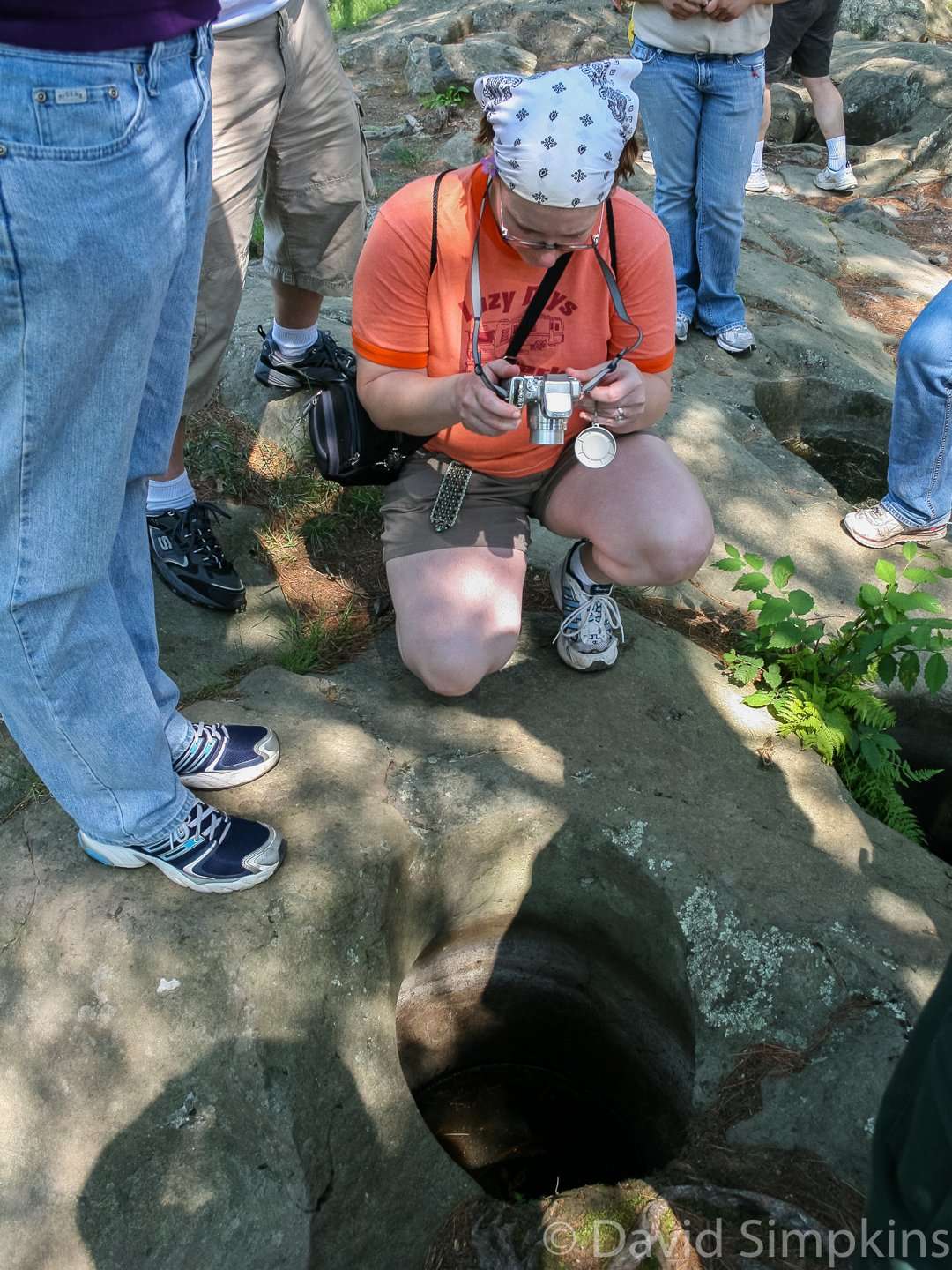 The potholes in the park range in size from a few inches to many feet across.

You can see scores of potholes-one is 60 feet deep-from the short Pothole Trail, which starts from the park’s northern parking lot. The 1.25-mile-long River Trail also starts from this parking lot, passing several overlooks on its way to the campground. 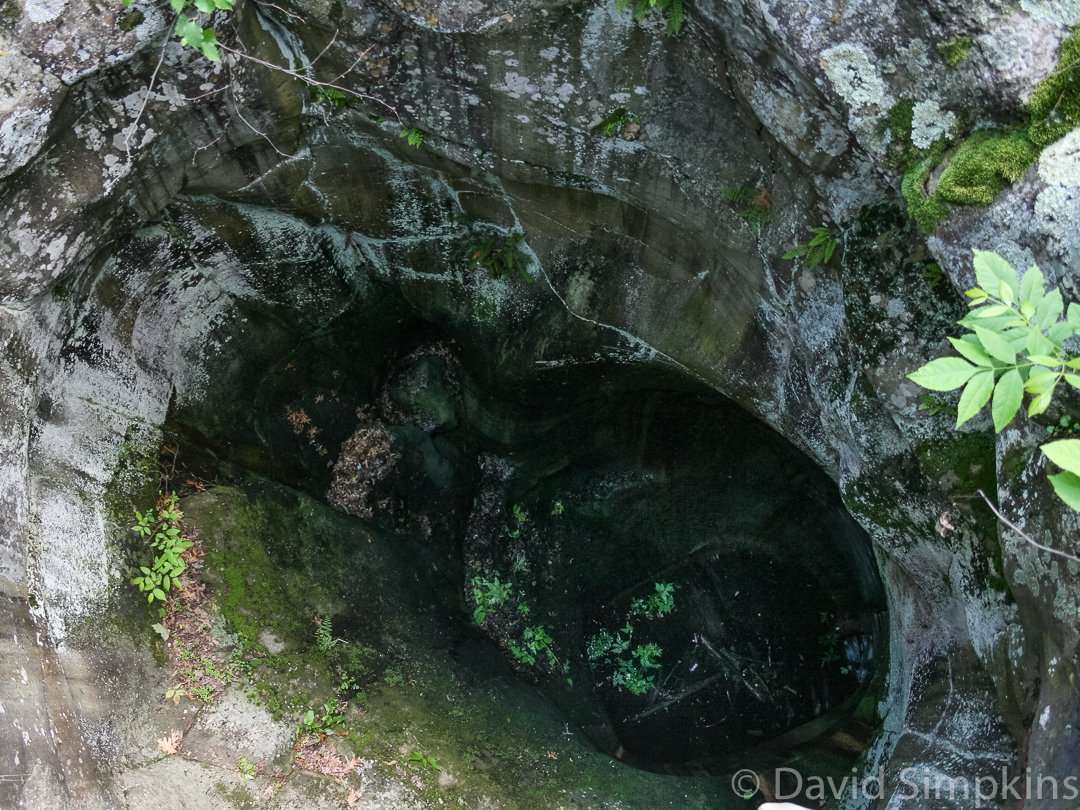 The “Bottomless Pit”is the deepest pothole at 60 feet 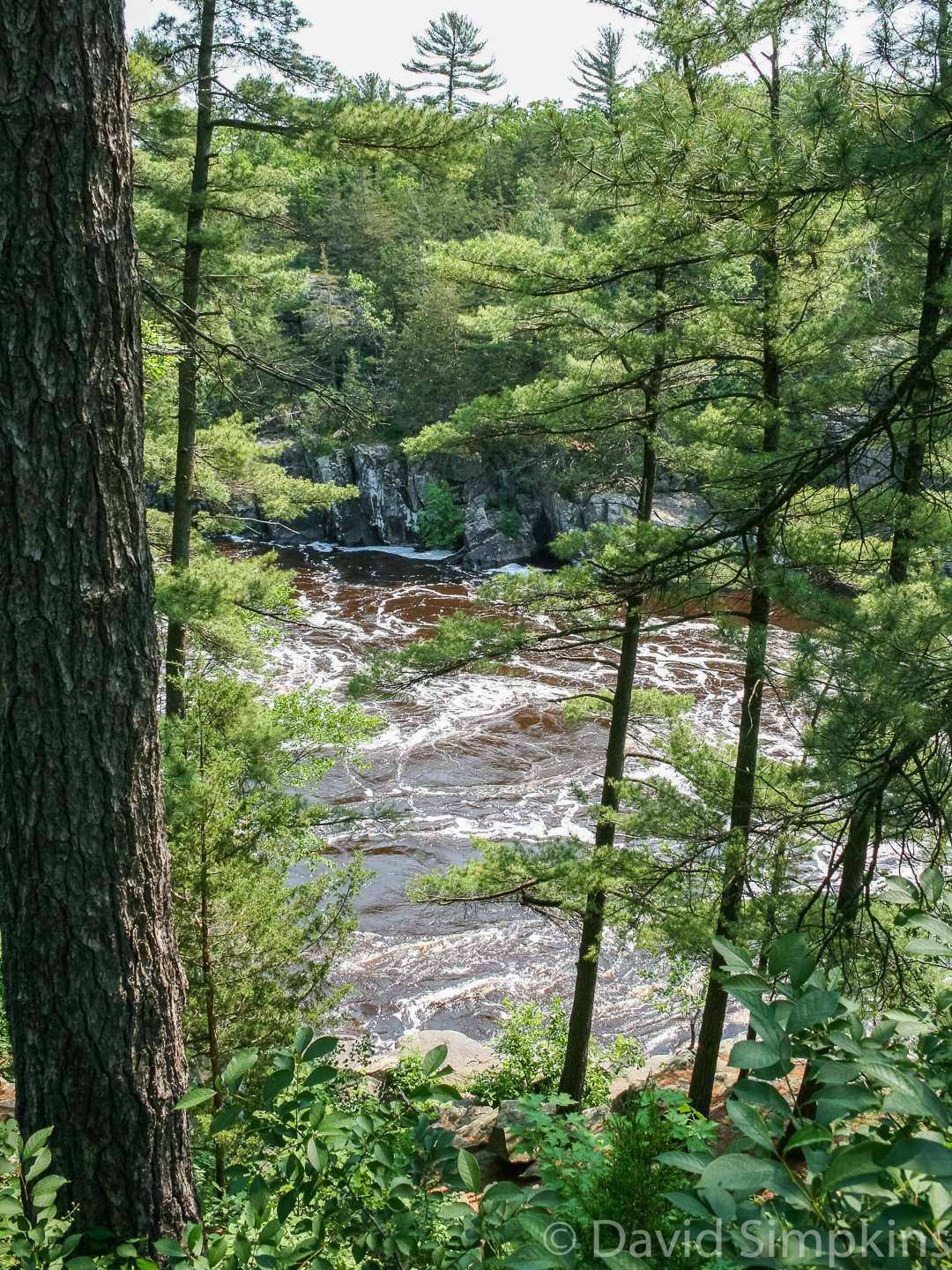 One of many spots on the River Trail where hikers can get a glimpse of the St. Crox River

Curtain Falls Trail begins at the south-side contact station, climbs to the bluff tops where you’ll get good views of the river valley, then loops back down to the tunnel under the highway to return to the contact station. 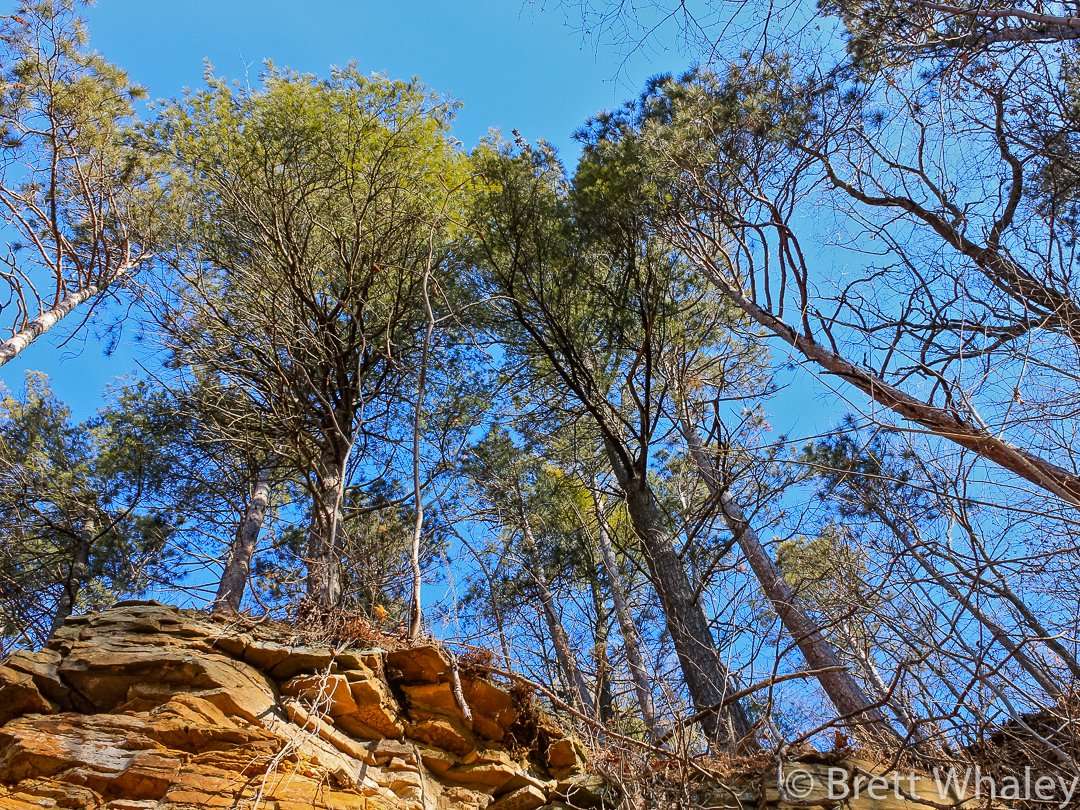 On the Sandstone Bluff Trail

The variety of terrain in the park supports a mixture of bottomland forest, hardwood groves, and pinewoods. Bald eagles, ospreys and hawks are among the 150 species of birds that have been observed in the park.

The Wisconsin side has a large campground with 82 sites, while the Minnesota segment has a smaller 37-site campground. Both parks have group camping areas, too.

These were the first interstate state parks in the United States.
Each state operates its own park but cooperates with the other by offering complementary services. The Wisconsin park has a guarded swimming beach, but there is no swimming on the Minnesota side. Both parks have boat landings. Fishing is good for most game fish, including northern, walleye and small mouth bass. Canoes can be rented in Minnesota’s park or you can tour the dalles (the steep precipices that form the walls of the river valley) on excursion boats that dock at the park’s northern end in Taylors falls. The St. Croix River is state-designated canoe route. 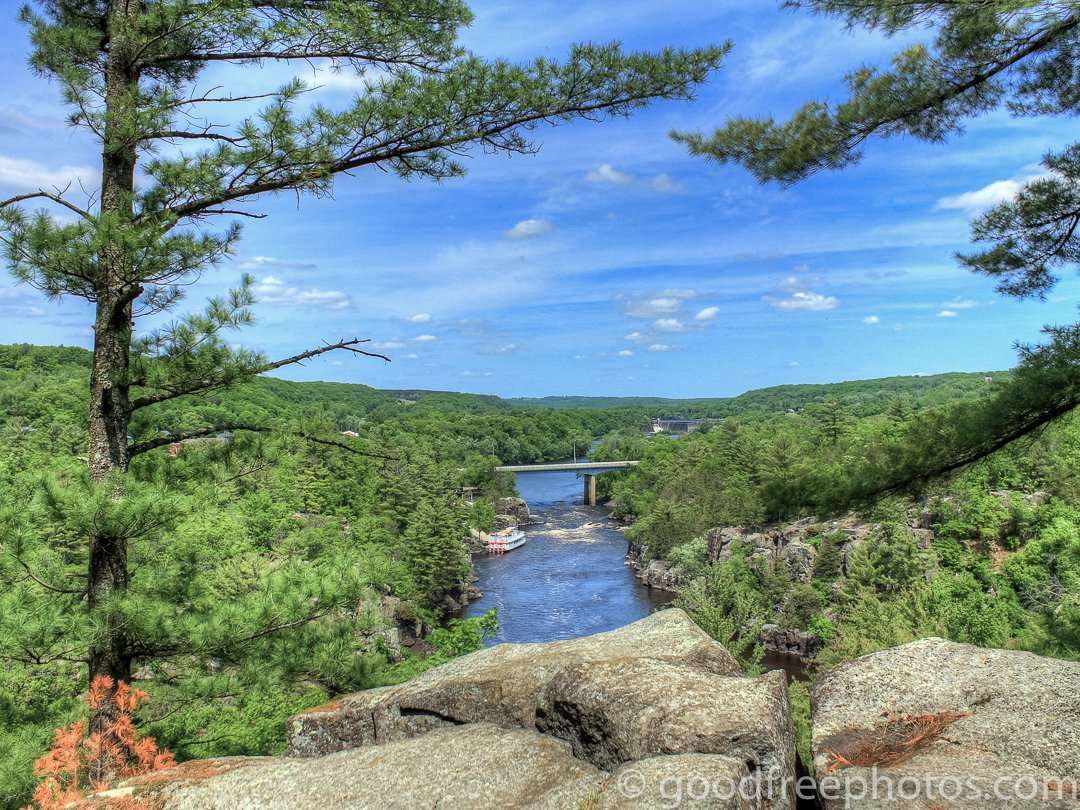 The view of the river from the Wisconsin side

Each park sponsors naturalist-led interpretive programs designed to help visitors understand the complex forces that shaped the dalles and the St. Croix River Valley. The Minnesota park has a visitor center and a small museum. On the Wisconsin side, the Ice Age Interpretive center details the role of glaciers in the park, one of nine units in Wisconsin’s Ice Age Natural Scientific Reserve.
It’s not surprising that Minnesota and Wisconsin joined forces to preserve the craggy dalles. Both states share backgrounds that are partially reflected in the names that Native Americans gave them: Minnesota, “sky-tinted waters” (from the Dakota) and Wisconsin, “gathering of the waters” (from the Ojibwe). The states share another distinction, The St. Croix, which originates in northwestern Wisconsin, became one of the first rivers to be designated a National Wild and Scenic River in 1958.

The wonders of the dalles and the forces that shaped them have long attracted international study by geologists. They come to see the basalt rock formations formed from the fiery violence of ancient volcanoes and earthquakes. Following the lava flows, great seas washed over the area, depositing sediments that hardened into rock on top of the basalt. 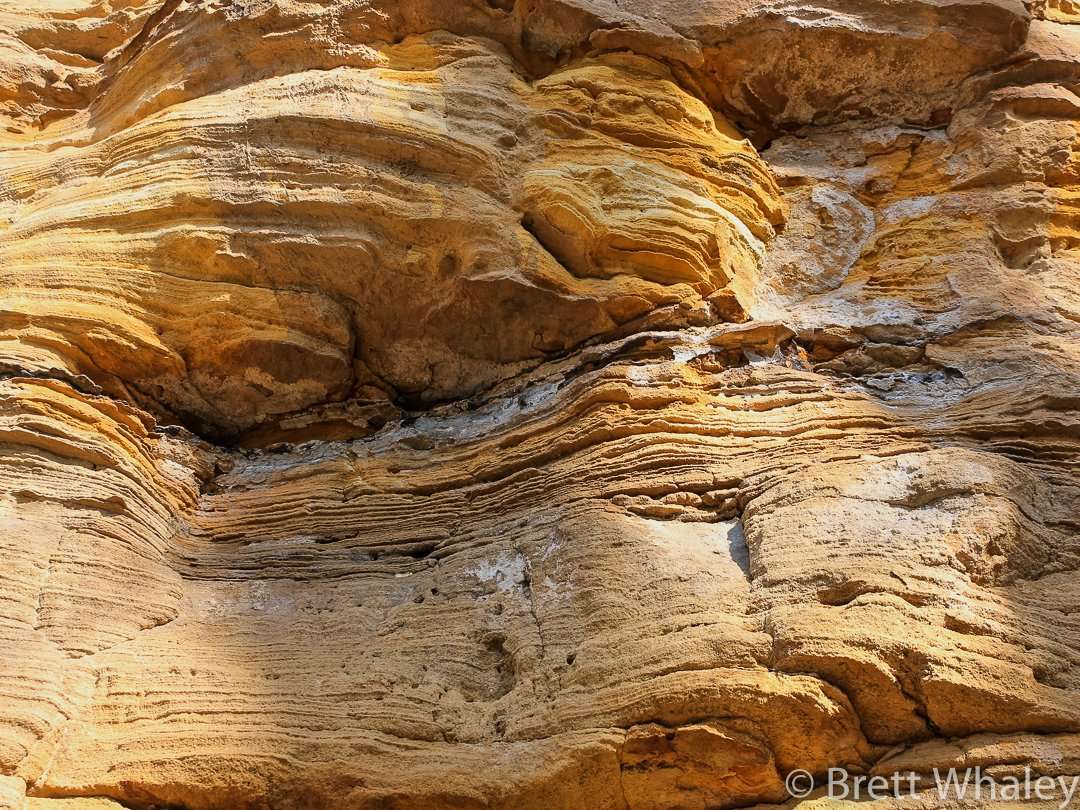 More recently, melt water from receding glaciers roared south, carving out the broad St. Croix River Valley. Only the basalt formations were partially able to withstand the torrent of eroding water, resulting in the beautiful dalles, potholes, and cliffs that we see today. 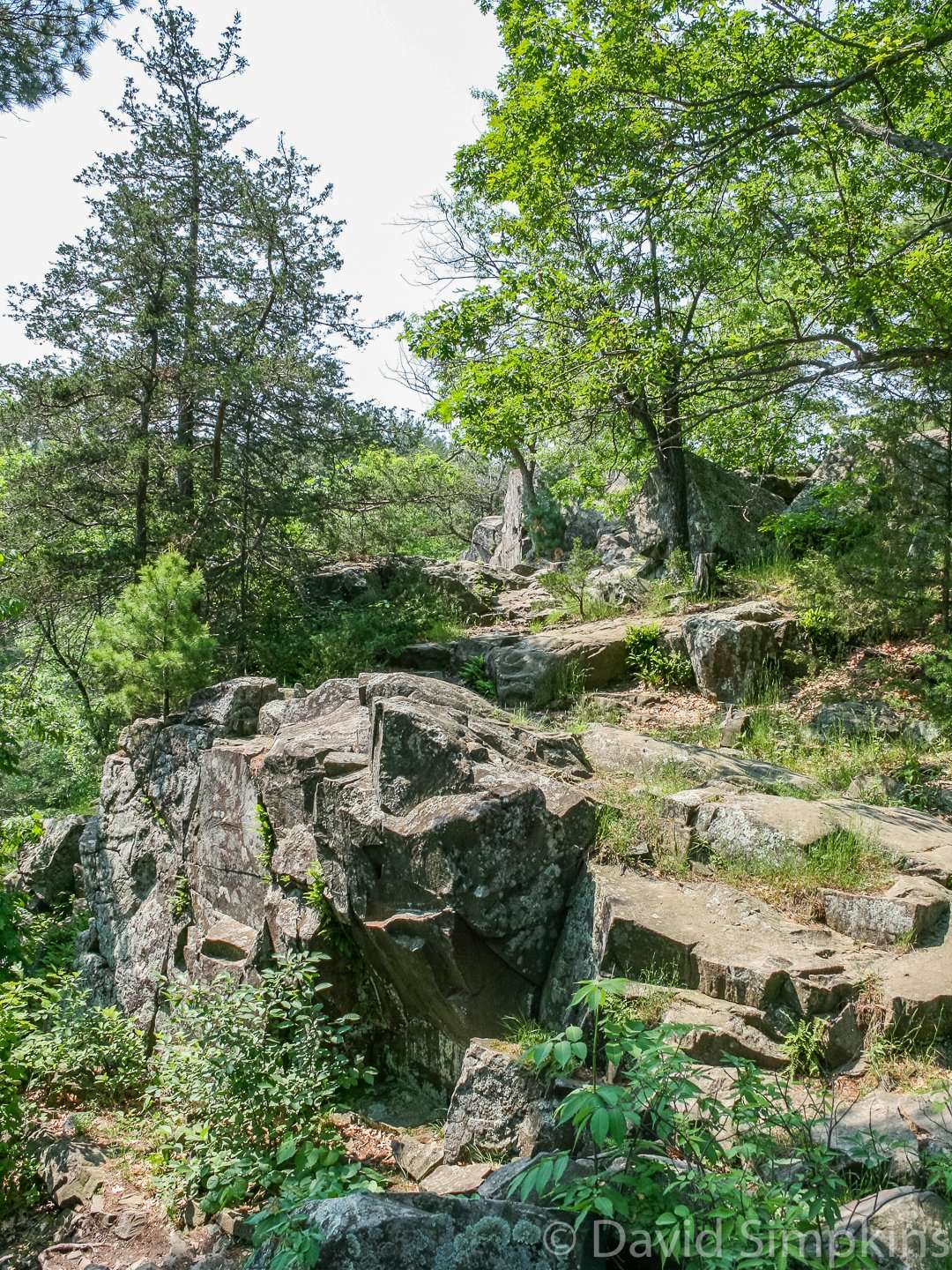 The “Bottomless Pit”is the deepest pothole at 60 feet

The potholes in the park range in size from a few inches to many feet across.

The St. Croix River Valley was home to both Dakota and Ojibwe at various times. Daniel Greysolon, Sieur du Luth, was the first European explorer to travel from Lake Superior down the St. Croix to the Mississippi River. Fur traders later turned this passage into a major transportation route.

Following a century and a half of fur trade, logging became the new economic base for this region. Boomtowns grew swiftly throughout the white-pine country, and the new industry attracted lumbermen like W.H.C. Folsom. Folsom, a civic leader and historian, built a Greek Revival-style house overlooking the river valley. This 19th-century house in Taylors Falls It is run by the Minnesota Historical Society and is open to the public.

To get the logs to distant sawmills, lumber companies floated them down the St. Croix River each spring from the northern pineries. Occasionally, the churning mass of logs would jam, choked in the narrow, rocky throat of the dalles. The granddaddy of all jams occurred in 1886 when 150 million board feet of logs were stacked like toothpicks. It took six weeks to clear the jam, while thousands of tourists lined the riverbanks to witness nature’s revenge on the lumbermen.

There is no cross-country skiing at Interstate State Park, but you can explore the trails on snowshoes.
Find Minneapolis/Saint Paul Metro area ski trails