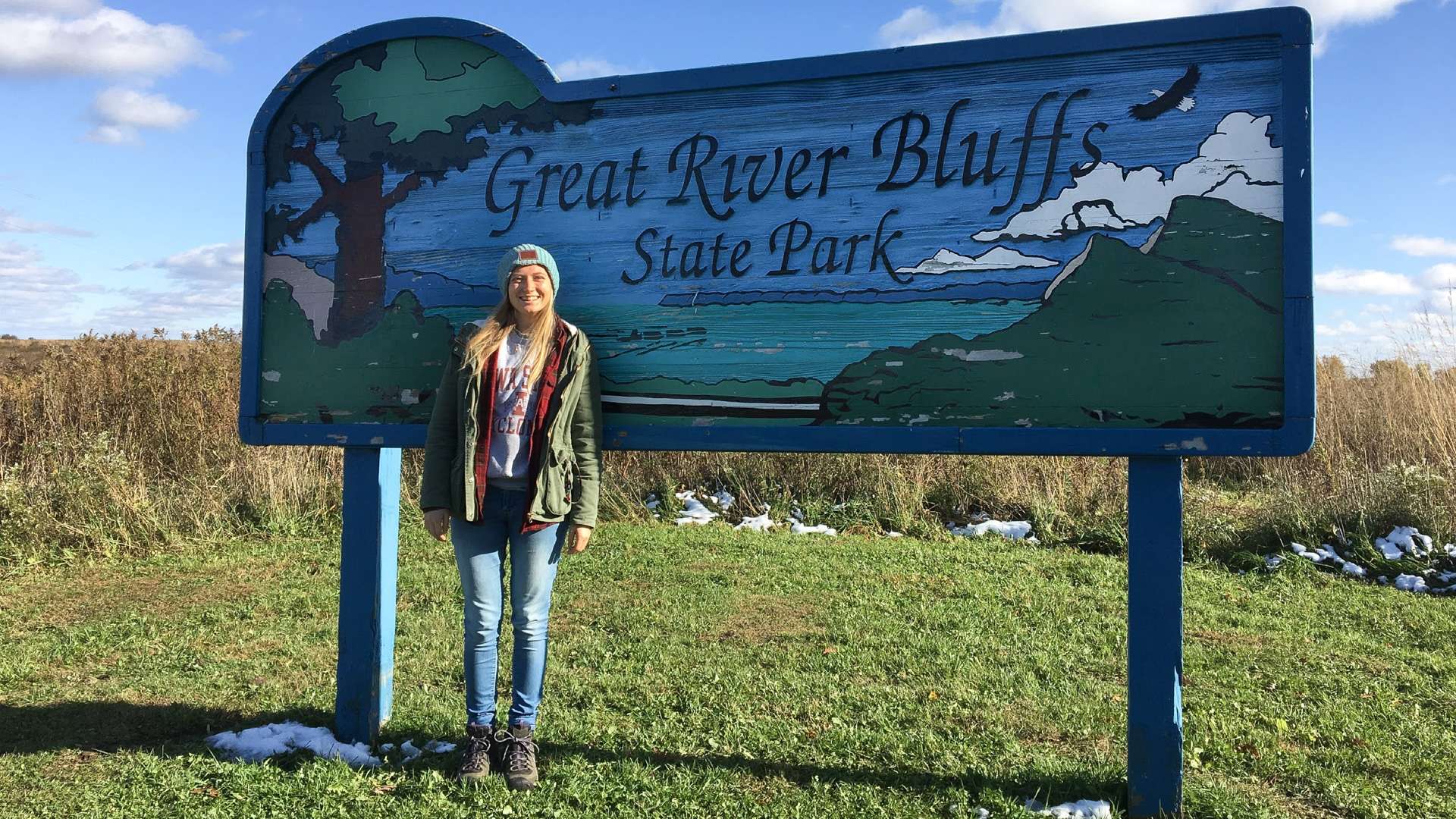 In October of 2018 my college friend Celsey and I took a weekend trip to Great River Bluffs State Park in Winona. We camped there for two nights and this adventure created many memories. 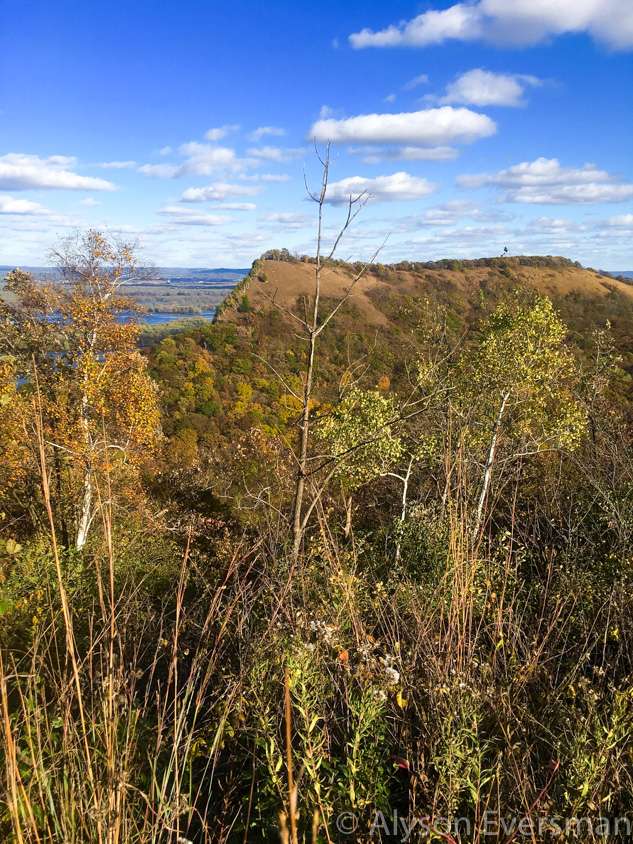 We chose Great River Bluffs because it lives up to its name. Here, in the Driftless area at the foot of Minnesota, the landscape wasn’t originally covered in the glaciers, which ground down the features of the land in the northern parts of the state. The bluffs the park is named for are still here and make for great hiking with many scenic views of the Mississippi River. I had previously been at this particular park two years ago to camp with some other friends, so it was nice to be a little more familiar with the area and campground layout. I was especially looking forward to re-visiting all the scenic overlooks, knowing they’d be even more gorgeous with the trees changing to crimson, gold and burgundy. 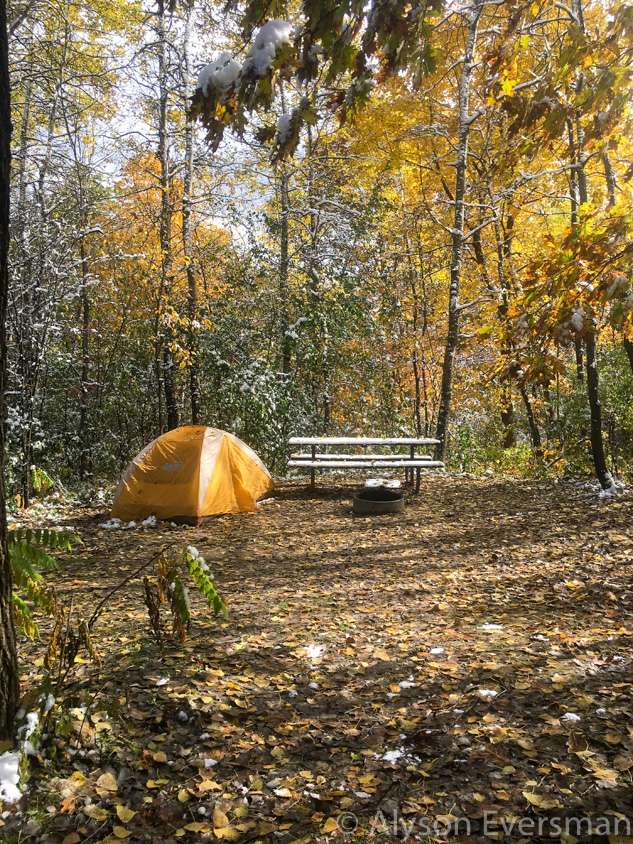 However, we didn’t see the harvest colors until the next day as it began to snow when we arrived. Despite this crazy setback, we still set up our tent without difficulty and went hiking around the park for a while. Our surroundings reminded us of Christmas as the heavy, wet snow fell from the sky, quickly breaking weak branches from their pile-up. We wandered along the hiking trails, observing and feeling the peace from the silence and stillness of the forest around us while witnessing a wonderland forming before our eyes. It made us feel as if we were in a Hallmark movie. 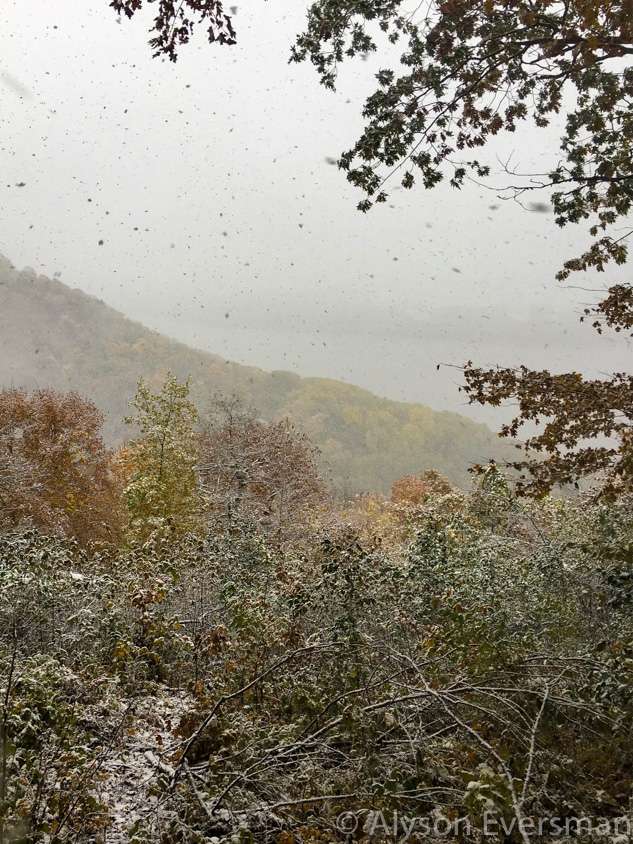 Our tent was almost hidden from sight when we arrived back at the campsite that night, resembling a snow-covered rock. We brushed it down, to keep the snow from entering once the doors were unzipped. Temperatures were supposed to drop below freezing that night but we came prepared and piled blankets and sleeping bags in the tent. After changing into our five layers of pajamas, we hunkered down and finally fell asleep to the silence the forest provided.

The next day, the frozen landscape around us – the glistening, white branches of Maples, Hickory, and Basswoods – were truly a sight to see, even if it was in the middle of October. Soon afterward, the harvest sun melted everything, revealing a different beauty of the park – probably its best-known feature: The colorful valley. 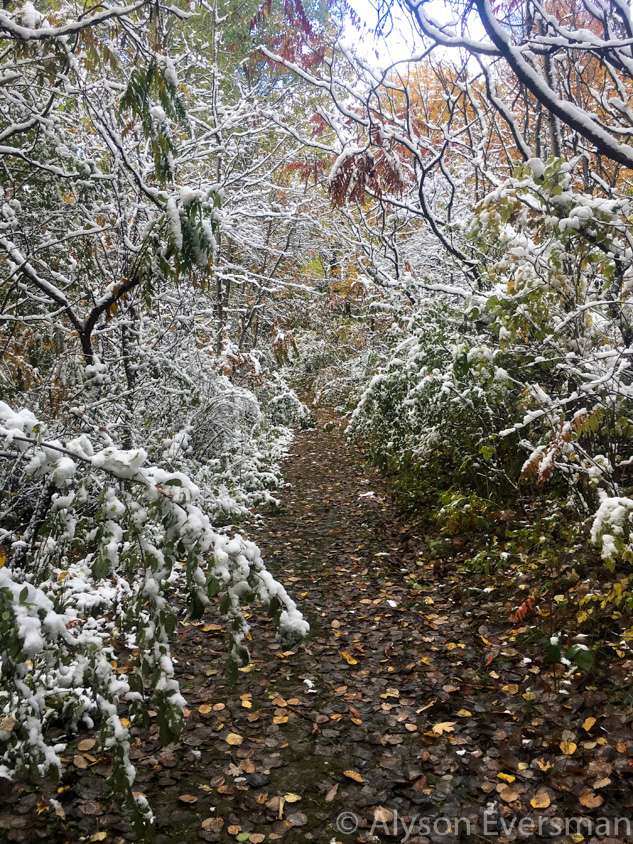 The park wasn’t at its autumn peak in colors yet, but the closing turn could be felt and even seen as a thin layer of gold or light orange tinted the green leaves on the majority of the deciduous trees. The early birds – the Maples, Oaks, and some Aspen – were already displaying their bright red and yellow canopies to the world, resembling lollipops among the green foliage. We didn’t realize how beautiful the scene really was until we hiked up King’s Bluff Trail and saw it from the famous overlook.

The hike to the top was long, but worthwhile, as the eastern side of the overlook showed the Mississippi River, which was especially beautiful that day, its blue ribbon snaking through a carpet of reds, yellows, and shades of gold. The opposite side consisted of a forest valley, fully displaying God’s beauty that is unique to the season of autumn. The fall colors amplified as the sun’s rays grew stronger– a sight that’s hard to describe. In a sense, the valley itself was its own autumn rainbow – Something you need to feel and see in person

Actually, I think the time I felt God the most while on this trip was at midnight of our last night, during the midst of another bathroom run. I happened to look up to a bright sky, covered with stars and a shining, almost full moon. It took my breath away. It reminded me how long it had been since I gazed at the stars with curious, awe-struck eyes. I wanted to stay outside longer, even howl at the moon like a wolf, and for the first time that night, I felt warm. God’s presence was calling me, reminding me of His love, and my tears were proof the moment happened. I stared up for so long that my neck began to ache, but peaceful sleep was also calling me name – and I ended up sleeping really well that night.

The next morning was bittersweet, as we both knew we had to leave the gorgeous area. After one last breakfast and another deep, loving conversation we went back to the first overlook to see what it was like now that the snow had fully melted. It was absolutely breathtaking. 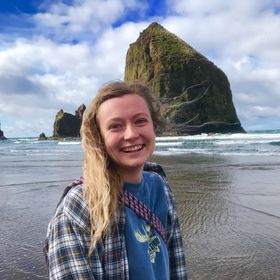 Alyson Eversman is a part-time freelancer based in the Brainerd Lakes Area who enjoys being out in nature. Her writing reflects this passion as all of her work engages Nature and the wildlife living in it from her point of view. She’s a graduate of Northwestern College located in Orange City, Iowa, with a Bachelor’s degree in both Ecological Science and Writing and Rhetoric. When she’s not writing, Alyson can be found working full-time on the plant care team at Jacobson Excavating and Landscaping, which is located in Brainerd and takes up most of her time. In her free time Alyson enjoys being outside with friends, family, and her fiance, Jacob. Her favorite outdoor activities include hiking, hammocking, and kayaking as well as maintaining her garden at home. Alyson has always wanted to go hiking in all the state parks of Minnesota and she is finally making that dream into a reality. Her blog is a place for her to reflect on the beauty of God’s creation she saw within each hike, as well as a reminder of all the adventures she’s had while accomplishing this goal. Follow her adventures on her blog.